101 Best Itachi Tattoo Ideas You Have To See To Believe! 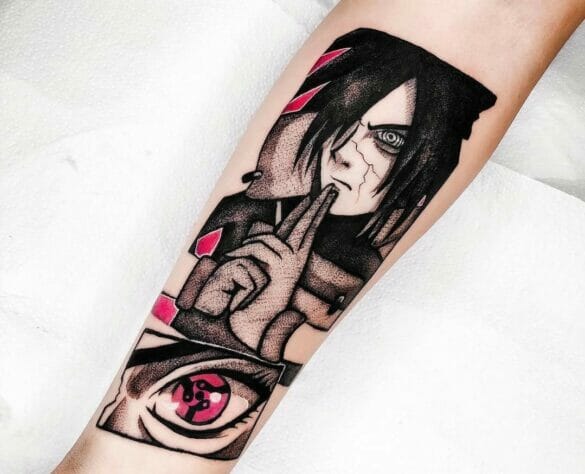 Looking for your next anime tattoo? Here we have for you some of the best Uchiha Itachi tattoos that will blow your mind!

We can not talk about the Series Naruto without mentioning Uchiha Itachi.

Nobody can show off the extremities one can go for their love of peace like Itachi. He lived for his love of Konoha, he massacred his entire clan at the mere age of fourteen for the village, and in the end, he died for it.

To understand his character, you have to understand that this is the boy who at the young age of seven thought like a Hokage. This is the person who would never hesitate to lay down his life or even kill someone to protect his beloved village. He did both and even joined Akatsuki as a spy to delay their plans of mayhem. However, the one he loved most was his little brother, and in his way, he made sure that Sasuke became strong enough to win overall difficulties and restore the name of the Uchiha clan. That is why an Itachi Uchiha tattoo always signifies strength, sacrifice, and love. They are in fact, one of the most popular among Naruto tattoo designs. So today, to honour one of the kindest characters we have ever met, we have for you a myriad of cool Itachi tattoo designs that all Naruto fans will appreciate.

Shisui, Itachi, and Sasuke are three of the most remarkable shinobi to have ever lived. No one even came close to Shisui and Itachi in Genjutsu prowess, and Sasuke with his Rinnegan and Indra Chakra is invincible. Theirs was a bond that defied life and death. They were even each other’s reasons for the Mangekyo awakening. You can get this tattoo to show your love for these characters or if you have a precious bond in your life like theirs, this tattoo can be your symbol of appreciation towards them.

We have always seen Itachi in his cold and composed demeanour except for his fight with Sasuke. So this was a refreshing surprise and a rare sneak peek into baby Itachi’s life when he had to wear cat ears to communicate with cats during a mission. Look at just how adorable he is. This tattoo is a sign that everybody has more to them than we see. This speaks of a soft heart inside a strong front. So if you are someone who always maintains a strong front but does never shies away from showing people how much you love and care for them, this is possibly the one for you.

This has got to be one of the coolest Itachi crow tattoo designs we have ever seen. Crows are an inseparable part of Itachi, it seems like his entire Genjutsu is made up of crows. This design shows it beautifully with the crow’s body intricately entwined with the Kunai and the hole in the hilt made up of his Mangekyo. If you have always wanted an Itachi Uchiha Tattoo that is symbolic of everything he is in a compact but cool design, this one is for you. This will show your originality and sense of style in the coolest way possible.

He joined the Akatsuki to delay their plans, but he never hesitated to do the dirty work. Not only of the most powerful Akatsuki members, but he is also one of the most feared too. This Itachi tattoo perfectly gives off that ominous and terrifying vibe that he carried himself with. Ironic really, given the fact that he is one of the kindest people to ever exist. You can go for this design to show your appreciation for his duality, to show even if you goof around to make everyone smile, you will never let someone walk all over you. Get this one inked and let it do all the talking for you.

This is possibly the beginning of it all. All the pain he had to bear and all the sacrifices he had to make. At the age of thirteen, he became the youngest Anbu Captain ever. Not only that, he worked as a double agent for the Uchiha clan and the village. This just goes to show the potential this boy had. This Itachi Anbu tattoo is for those who are not afraid to take risks in life. The daredevils who even in the face of adversity never lose their calm. If you are someone like that, get this Itachi tattoo to celebrate the champion in you.

This is one of those scenes that seemingly sealed Itachi’s fate. He awakened his Mangekyo Sharingan when he watched his best friend and brother jump from the cliff after making him promise to take care of their precious village. For those who have people they never want to lose, you can get this Itachi Sharingan tattoo to speak of your love to them. You can even get matching ones inked to show your support for one another.

This Itachi crows tattoo depicts the scene of that terrible fateful night that turned both the Itachi and Sasuke’s lives into a pit of agony. Overnight, as a mission to protect the peace, Itachi massacred his entire clan. He killed his parents, he killed his lover, however, he could not bring himself to kill his little brother. This Itachi tattoo shows how far someone can go to protect the things they love. Show everyone that you can not be taken advantage of with this design.

This scene marked the beginning of the epic Itachi vs Sasuke Genjutsu fight. It was hard to watch even though we still thought of Itachi as a stone-cold killer. He sat on the Uchiha throne like a king. This Itachi tattoo successfully shows the sacrifices a leader has to make to protect the people. Get this Itachi tattoo inked to show the king in you. It will give off that regal vibe that makes you stand apart in a crowd.

This is the first and last time we witnessed Itachi’s gorgeous red Susanoo which he manifested to drag out Orochimaru from Sasuke’s Curse Mark. This is one of those tattoos that manage to carry the essence of that powerful scene. We are in awe of this Itachi Susanoo tattoo. If you want to portray your love for this character this Itachi tattoo be the one for you.

The Uchiha Brothers For One Last Time Tattoo

This Itachi tattoo depicts the last time we saw the brothers together. The painful goodbyes made us bawl our eyes out. It shows the boundless love Itachi had for his brother and how it shaped who Sasuke is. This Itachi Uchiha tattoo is for those due hard Naruto fans that still shed a tear or two whenever Itachi is mentioned. If you are someone like that, this tattoo will make your day.

You must choose the one that suits your personality best because your tattoos show who you are like nothing can. If you are still confused about what to choose, here are some more Naruto tattoo suggestions for you:

What does an itachi tattoo mean?

There are a few different interpretations of what an itachi tattoo might mean. Some people believe that it represents strength and power, while others see it as a symbol of darkness and mystery. It really depends on the person’s own personal interpretation.

What are the different elements of an itachi tattoo?

There are a few different elements that can be included in an itachi tattoo. These include the Uchiha clan crest, Itachi’s Sharingan eye, and various other symbols associated with the character.

What is the best place to get an itachi tattoo?

There is no one specific place that is considered the best for getting an itachi tattoo. It really depends on the individual’s preference. Some people prefer to get them on their back or chest, while others opt for more hidden locations like the wrist or ankle.

How much does an itachi tattoo cost?

The cost of an itachi tattoo will vary depending on the size and complexity of the design. Generally speaking, smaller tattoos will be less expensive than larger ones. Additionally, the artist’s skill and experience will also affect the price.

What are some of the best itachi tattoo designs?

There are a wide variety of itachi tattoo designs to choose from. Some popular choices include the Uchiha clan crest, Itachi’s Sharingan eye, and various other symbols associated with the character. Ultimately, it comes down to personal preference as to which design is best.