10 Best Traditional Dagger Tattoo Ideas You Have To See To Believe! 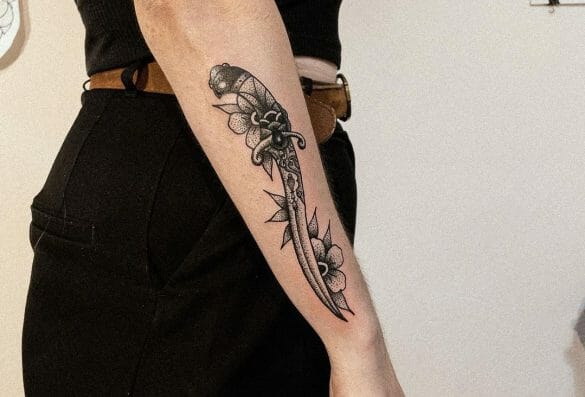 Daggers are believed to represent betrayal and danger. They also represent death and are sometimes considered as a sign of courage and protection.

A dagger is a type of knife with a very sharp end. It has a wooden or metal covering and has been most commonly used throughout the ages for killing and stabbing during combat.

A fantastic neo-traditional dagger tattoo option, this tattoo uses vibrant colors to portray the fierceness of a tiger and the power of the dagger. Neo-traditional dagger tattoos are a fusion between the old traditional style and the modern ones. The heavy use of the color red as flames in this tattoo depicts the rage and fury of the tiger as well as the radiating force of the powerful dagger. The blade of the dagger is piercing through the tiger’s mouth, but the expression of the animal doesn’t hint at any injury or pain. Instead, the tiger is shown with big eyes and a fierce face, making it look furious. Undoubtedly one of our favorite neo-traditional picks!

This is a typical style of tattooing a dagger and is shown to be piercing through the skin of the person’s arm. The grip of the dagger has traditional designs which retain the original style of the dagger. The colors – black, grey, and blue have been used in the blade with an excellent shading effect to give it an authentic metal-like appearance. There are red stretches at the points where the dagger is piercing through the flesh, which depict the deeper layers of the skin. The blood spatter accents on either side of the blade give it a more realistic feeling. Many cultures and regions have a variety of daggers, which may differ in shapes, sizes, single or double edges, and even in the material they are made of. The daggers have their unique name or regionally may be called something else too.

Heart and dagger tattoos are a great mix of the two primary emotions – love and anger. A heart tattoo depicts love and passion and gives more or less a happy feeling. Its combination with the dagger could represent the dark side of love and could symbolize the innumerable sacrifices carried out in the past for love. The sword piercing through the heart is symbolic of this harsh reality. Pretty-looking flowers surround the core, adding purity and gentleness to the design. A colorful dagger tattoo or bunny dagger tattoo sounds fascinating. It could be an indication of an evil heartbreak or betrayal by a loved one. Keep in mind this has a negative connotation, and getting such designs can bring you more hurt and pain as constant reminders.

While our arms or legs can be our comfort zone when it comes to tattoos, the head is a pretty cool spot for a dagger design. This tattoo proves that color tattoos are not the only type that’s beautiful. A simple yet powerful design in black, like this one, is quite fascinating. Even the blood dripping from the base of the dagger is painted in black, but it doesn’t fail to portray the bold nature of the design at all! The upright position of the dagger should be noticed here. Traditional tattooing with the skull dagger designs can have a tall and slim shape with motifs like traditional rose and bunny heads. This can be a disturbing image for many, as it looks the dagger has pierced the customer’s head. It is a bold piece of art by the customer to have and the artist to execute.

Skull and dagger tattoos are much loved for the close relationship between these two elements of victory and death. In this design, the skull is biting a heart while there’s a slim-shaped dagger piercing it. The slim and tall shape of the blade gives it the appearance of a sword tattoo. The piercing effect can be a sign of overcoming death although the text wrapped around the design juxtaposes the thought. The fine lines on the skull with added shading give a 3D effect to it. Flowers and leaves adorn the structure. The quote “Death before chastity” could symbolize someone fiercely religious and wanting to follow all tenants of love, marriage, and togetherness. It may also seem like a promise to the self that they will remain chaste all through their lives and respect their partner and God. Such solid messaging can make the customer feel closer to their traditional upbringing or God’s word. This one is a haunting skull dagger tattoo that would look wonderful even when combined with a rose tattoo.

A snake tattoo’s meaning is quite obvious. What about a snake and dagger together? Well, these two elements when brought together portray the triumph of good over evil. In this particular tattoo, the snake is camouflaged with the green leaves around the dagger. The body of the snake and the overall design have ornamental details and work as great gap fillers. The colorful shin flower underneath the dagger looks beautiful. This is a very traditional motif and can be modernized if you want it. The tattoo also reminds us that we must be fearless even when surrounded by hateful or negative things. There are many life lessons in this single piece of art. The customer must be a mature individual who would have dealt with many harsh realities of life or may have been betrayed by close friends and families more than once. You can ask your tattoo artist for a more varied color palette if that’s something you’d prefer. On the other hand, you can opt for lesser colors if you want a transparent effect.

A traditional dagger tattoo design coupled with some fierce dragons, like this design, is an impeccable combination that explores both the traditional dagger designs and the mythical category. The dragon in this tattoo, all intertwined and made to look as if they are guarding the dagger. The body of the dragon has rope-like detail and the underside of the body is colored bright red. Just like daggers, dragons are a symbol of power and strength. Dragons are mythical creatures that have fascinated human beings for centuries now. Be it books, movies, series, or any other form of art, and dragons hold a special place in our hearts. Here the dragon can represent protection from betrayal for the tattoo owner. Dragons are known as protectors, and this tattoo may be telling the same story. The tattoo is made with only three or four colors like red, black, golden yellow, and white giving it a bold look. Discussing with your artist whether or not to use colors or get this done in greyscale can help you decide the overall look of this type of tattoo design.

These two designs are similar to each other but have exclusive features. The design on the left limb contains the sun, while the one on the right shows the moon and stars. Religious iconography is seen here, as the sun and moon are observed as elements of worship in several religions. Most traditional tattoos contain these two elements and are also sometimes considered a source of positivity. The shades used are light and soft. The use of bolder colors might not give the same effect. The overall palette of this design is dominated by black. In both tattoos, the dagger is facing down, depicting meaning of feminine gentleness, similar to the moon. The smiling moon and the happy sun face in these tattoos represent positivity and the will to fight come day or night, sun or rain. The tattoo covers almost the whole of the calf area.

At first glance, this might look like a knife tattoo due to the wooden grip and flat blade, but it is actually a dagger. However, you can go for this one if you want a mix of dagger and knife tattoos. The edge of this dagger is filled with bright red roses. The rose tattoo meaning is simple, as the flower is a symbol of love and passion. As the dagger relates to love as well, this is a beautiful combination. The white flowers on the lower and upper sides of the dagger have a touch of yellow and are adorned with leaves colored with three shades of green. There are three bright yellow circles on the dagger’s grip, which adds more detail to the entire design. This design is probably one of the unique ones you might have seen here and worthy of getting inked for both genders. Commonly a weapon is always associated with violence or war, but here the artist and the owner have tried to convey a message of peace and solidarity.

Another stunning dagger and rose tattoo, this design consists of a pierced rose and a dagger in black. The base and tip of the dagger have intricate designs, while the rose rests on some leaves and twigs. These form the symmetrical embellishments of the design. A pretty butterfly is resting at the bottom of the rose. The rose has been given a somewhat grainy texture, and the entire tattoo looks fantastically bold in black. This artwork will look stunning in color, too. You can discuss with the tattoo artist to get this such a design in bright color. The blood-red rose color may indicate a heart, and the dagger piercing the rose may indicate a bloody betrayal or cheating. Such motifs look great on the chest or back too. On the back, it may represent a backstabber. If you wish to get a rose and dagger tattoo, make sure to check this design!

If you are looking for more Dagger tattoo design ideas, here are some more