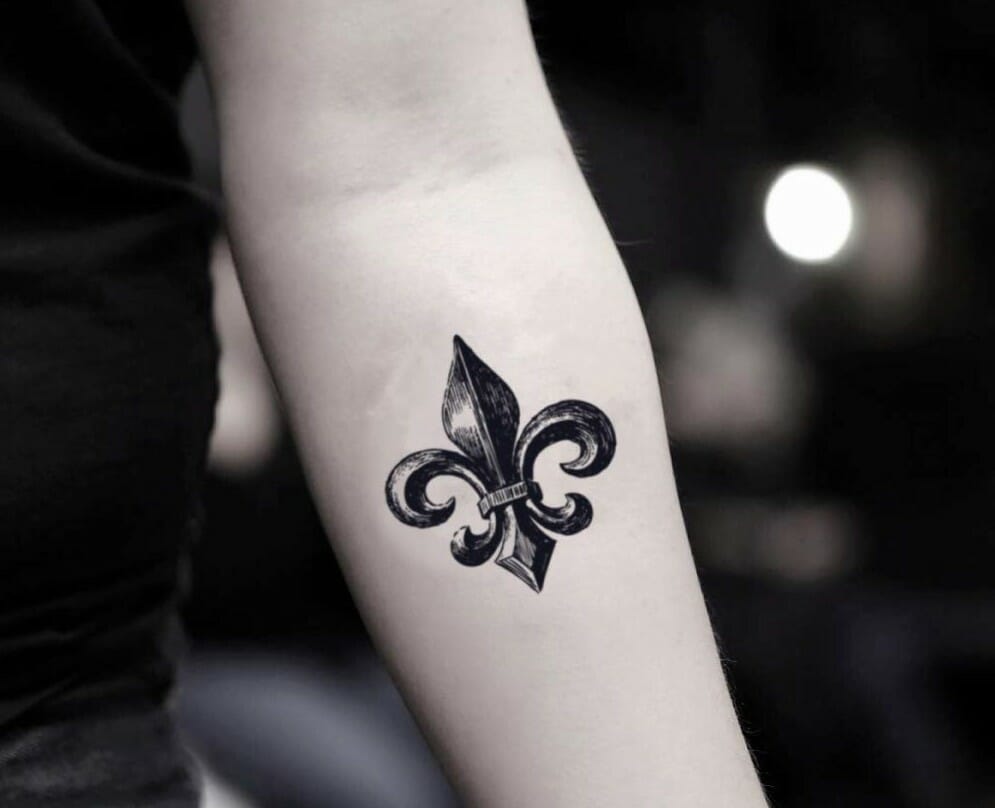 Are you looking for tattoo ideas to honour your family’s lineage? Check out this list of fleur de lis tattoo ideas specially curated for you!

Fleur de lis tattoos are known for their deep meaning and beautiful aesthetics.

The fleur de lis symbol is also often associated with the virgin Mary and feminine purity. It is proudly worn by many Christians as a religious symbol. Many armies have had the fleur de lis design on their flags since it is also regarded as a good luck charm. It is a part of numerous city emblems in western Europe.

This category of tattoo designs has a close connection with French history as well. Amongst so many meanings ascribed to this symbol, a significant one is that it gets its unique shape from the iris flowers that grow on the banks of the Lys river in France.

Fleur de lis translates to lily flower in French. It is therefore believed that this symbol has a connection with the purity of the lily flower as well. It has multiple meanings in the French culture. It has been used as a historical symbol and a royal emblem in France since times immemorial. It is indeed a cunningly suave French logo and often finds mention in French phrases as well. At its core this is a symbol of nobility, integrity, dignity and honour.

While this symbol has a deep feminine connection, it is also popular amongst many men as the symbol for the NFL New Orleans Saints. Many men chose to get fleur de lis tattoos to show their support as fans of the team. The tattoo also stands for a man’s internal character and represent hope. Apart from that this symbol has had a long history with Spanish and French History and courtly civility.

Those who do not associate with the deep history behind this symbol go for it because of the charming design. The de lis symbol has served as inspiration for many matching designs in the jewellery industry.

It is quite remarkable that during the Vietnam war , the United States Army and Air force had a baret designed with the de lis symbol on it.

The beauty of this symbol and fleur de lis meaning is multi-faceted. It has a wealth of history and inner meaning associated with it. Like the external beauty of lily flowers, the external appearance of this tattoo is also like artwork.

This tattoo is the official mark of the symbol and is perfect for those looking for a simple and delicate design. The linework is impeccable. This tattoo can be made anywhere depending on your choice. However, keeping in mind the delicate and understated look on this tattoo make sure to pick an are on your body that is more easily visible.

This tattoo is for the fierce female warrior that lives in every woman. This fierce tattoo symbolises both feminine strengths as well as feminine purity. The tattoo features Joan of arc in her armour suit ready for war. The colour palette of this tattoo is vibrant. The fleur de lis symbols can be seen on the ribbon flying across the tattoo.

This tattoo is gorgeous, to say the least. The placement of the tattoo is on point. The symbol already has a strong feminine connection. Placing the tattoo beneath the breasts symbolises the nurturing nature of women. The tattoo is monochromatic. The design is victorian with gothic flowers blooming out of the symbol giving it an antique look.

This tattoo is cuteness redefined. The tattoo is a simple recreation of the symbol on the finger. The black in makes this charming tattoo stands out. The thumb ensures that the tattoo hets maximum visibility and is bound to be a conversation starter wherever you go.

This tattoo is masculine and full of intimate details. Perfect for gentlemen, this tattoo makes for an excellent sleeve tattoo design for those who wish to impose unquestionable dominance. This sleeve tattoo is a piece of art with the central symbol being the de lis which is accompanied by magnolias, roses and lilies.

This gorgeous tattoo is ideal for the back. People prefer to get this type of tattoos while honouring their family lineage. The tattoo is created using black ink. The details in this tattoo are worth the attraction it deserves. The de lis symbol is accompanied by beautiful lilies , a queen bee and a crescent moon. All the elements on this tattoo have deep feminine connections.

This tattoo is exactly what a modern adaptation of this symbol looks like. The structured design finds a creative outlet in geometric shapes giving rise to this super attractive tattoo. This tattoo will pretty much look great anywhere. For women, the sternum can be a great place to position this tattoo for a sensuous look with intense feminine undertones.

This tattoo is gothic and victorian designs inspired. The antique look is quite charming and the placement of the tattoo is great. The lily flowers blooming out of the symbol add a hint of drama to this monochromatic tattoo which is a sight to behold.

This tattoo is for the bold people who love making strong fashion statements. The tattoo in itself is very simple and looks like all the other normal designs of this kind. The placement of this tattoo is what sets it apart from its counterparts. This tattoo is sure to make heads turn where ever you go!

This tattoo is unique because of its colour palette . The electrifying pink and blue splashes of colour used around the symbol gives it a unique appearance.

If you are still looking for more fleur de lis tattoo inspirations, check out the list below: