10 Best Geometric Snake Tattoo Ideas That Will Blow Your Mind! 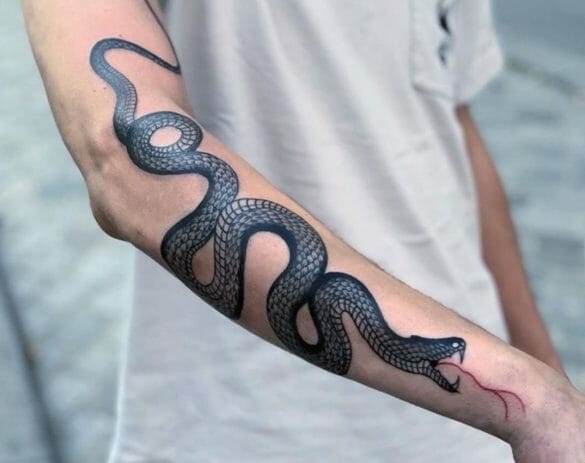 Geometric snake tattoos are slowly becoming popular over the past few years.

Both snake tattoos and geometric tattoos have their origins in ancient times. And incorporating geometric shapes into a snake tattoo is a great way of turning a boring piece into something unique.

Geometric tattoos are made of shapes, lines and points. They became popular in the 2010s. The best part of getting a geometric tattoo is that you can choose from a variety of shapes to create an image of your choice. And geometric snake tattoos, though unconventional, are quite interesting. A snake tattoo is primarily a powerful symbol of evilness, change, cyclical nature of life, wisdom, darkness, temptation, divine authority and a lot more. Snake tattoos, in many cultures, represent danger. But they have different symbolism in different cultures. And from one to another snake tattoo meanings depending upon the type of the snake vary a lot. For example, Japanese snake tattoos represent good fortune, wealth and protection of riches. The venomous snake that we see in a cobra tattoo was believed to be the protector of pharaohs in ancient Egypt. Whereas a rattlesnake tattoo serves as a warning from the wearer that says ‘don’t tread on me’ to people who look at the tattoo. Pythons, though non-poisonous, are known for their aggressive nature, and the threat they pose to humankind. Thus, a python tattoo can be perceived as a warning sign as well. According to Bible, a snake represents the evil serpent in the garden of Eden who tricked Adam and Eve. But a Christian snake tattoo represents the exact opposite things, which are fighting vice and looking up to God. There are many beautiful symbols that have serpents in them and make good tattoos. A very popular example is the ‘ouroboros’ depicting a snake eating its own tail (representing death, rebirth and renewal of life) or the symbol of the coiled snake ready to strike (representing conscious reflexes). A geometric art inspired by the devil can be worn as anything from a neck or hand tattoo to a full-sleeve or full-back tattoo. And if you want a geometric snake tattoo for yourself, know that we have got your back. Here is a list of our favourite snake tattoos that are geometrical. Enjoy:

Wrap-around designs are always effective and perfect for snake tattoos. This kind of placement gives the long reptile a chance to spread instead of being concentrated in one particular area of the wearer’s skin. The scales of the snake are inked using crosses and rhombuses, whereas the head of the creature contains different polygons. If not as an anklet piece, you could always wear it as a bracelet tattoo. If you want something medium in size and simple in nature, go for this one.

This tattoo showcasing icons like a skull, a python, a pair of glasses, a glass of wine or potion, a crown, the phrase ‘Avada Kedavra’ and all the other things including the geometric patterns, is undoubtedly a piece of art that is all about black magic. If you are into black magic or are fascinated by the idea of it, with a good artist, some planning before the inking, and some care from your end during the healing process, this tattoo is gonna look dope.

This tattoo featuring a snake, flowers, leaves and geometric shapes is not only gorgeous but symbolic as well. Flowers in a tattoo often represents delicacy, innocence, and purity. But the addition of the snake makes it an incredibly attractive tattoo with a totally different meaning. This particular tattoo represents temptation, seduction, letting loose on morality and allowing sinfulness to set in. And so if you believe a little bit of wickedness never harmed anyone, then we are sure you would not regret getting this inked.

Medusa, the Greek goddess turned into a terrifying monster, transformed onlookers into stone with her disastrous gaze. This geometric tattoo featuring Medusa’s head is semi symmetric. This tattoo portrays the fact that like Medusa, the owner of the tattoo is unsociable and dispassionate or maybe those approaching the bearer get harmed. This is a body art that serves the purpose of being a warning tattoo. This tattoo could be an arm or calf tattoo. But all in all, be sure, it’d be a good choice.

The circular shape of the snake primarily and literally portrays the circle of life. But the presence of the rose in the tattoo gives it a new meaning altogether. A rose tattoo is symbolic of pure love. But the snake and the rose combined change the meaning to giving in to temptation and raw sexual desires. If you think you are someone who isn’t all about love but also about passion and fulfilling your carnal urges, you’d probably be a suitable wearer of this tattoo.

For someone who wants a semi-large geometric snake emblem that can easily be hidden under certain circumstances, this tattoo would be a suitable choice. But the hip is a sensitive area. So you should choose the size of your tattoo based on your ability to endure pain. This geometric snake artwork is perfect for those who are going through some changes and looking forward to new beginnings. And if that’s not the case for you, you could get it for its alluring sensuality too.

The meanings of tribal tattoos might change from culture to culture, but the basic structure of all tribal tattoos are pretty similar. Tribal tattoos often draw inspiration from natural things and animals. And so what could be more badass than a snake inked in the tribal tattooing style? There are many geometrical patterns in this tattoo and the snake itself is in a shape of a geometric wave. And if you want a small tribal tattoo, we suggest, you should consider having this one inked.

This tattoo looks somewhat like a caduceus, the rod carried by Hermes in Greek mythology. Only there is one snake instead of two and the caduceus is replaced by an arrow, a weapon used in war. The snake represents a creative life force. But a snake wrapped around an arrow represents the protection of life, the fight against evil, courage and strength. You can also create or customise a design like this one. With the help of a skilled artist, you’ll be good to go.

Sacred geometry tattoos are made of shapes and patterns that are found in nature. They also incorporate religious icons into the artwork. Arguably, if worn on proper body parts, sacred geometric tattoos can heal all health conditions and provide balance. And in many religions, shakes are considered to be sacred animals that bring good luck if turned into a piece of art or tattoo. So wait no more and start looking for experienced and trustworthy tattoo artists with reasonable charges and get on it already.

Do you want a side tattoo and are considering getting a geometric snake inked on yourself? I guess we have found exactly what you are looking for. Turning a snake art into a side tattoo would be a great option if you wanna go for something trendy and still have a unique design. This tattoo extending from the side of the stomach to the knee is a beautiful piece inked using geometric shapes and patterns. We promise, this one’s gonna stand out in the crowd.

If you have liked going through our list of geometric snake tattoos, then we hope, to some extent, it has been helpful for you to decide on a particular tattoo design. You can also flaunt your creativity by adding a thing or two to a snake tattoo to have a complete concept portrayed. If a serpent tattoo really does suit your persona well, we suggest, you should go for it without having to think twice, because whatever your age, gender or race are, getting serpents inked on the skin is always a dope idea. But you still might want to be sure before you fixate on one design because getting inked is a permanent thing you cannot easily undo. Having said that, if you are still confused, here are some more geometric snake tattoos you can consider looking up on the internet: