10 Best Frankenstein Tattoo Ideas You Have To See To Believe! 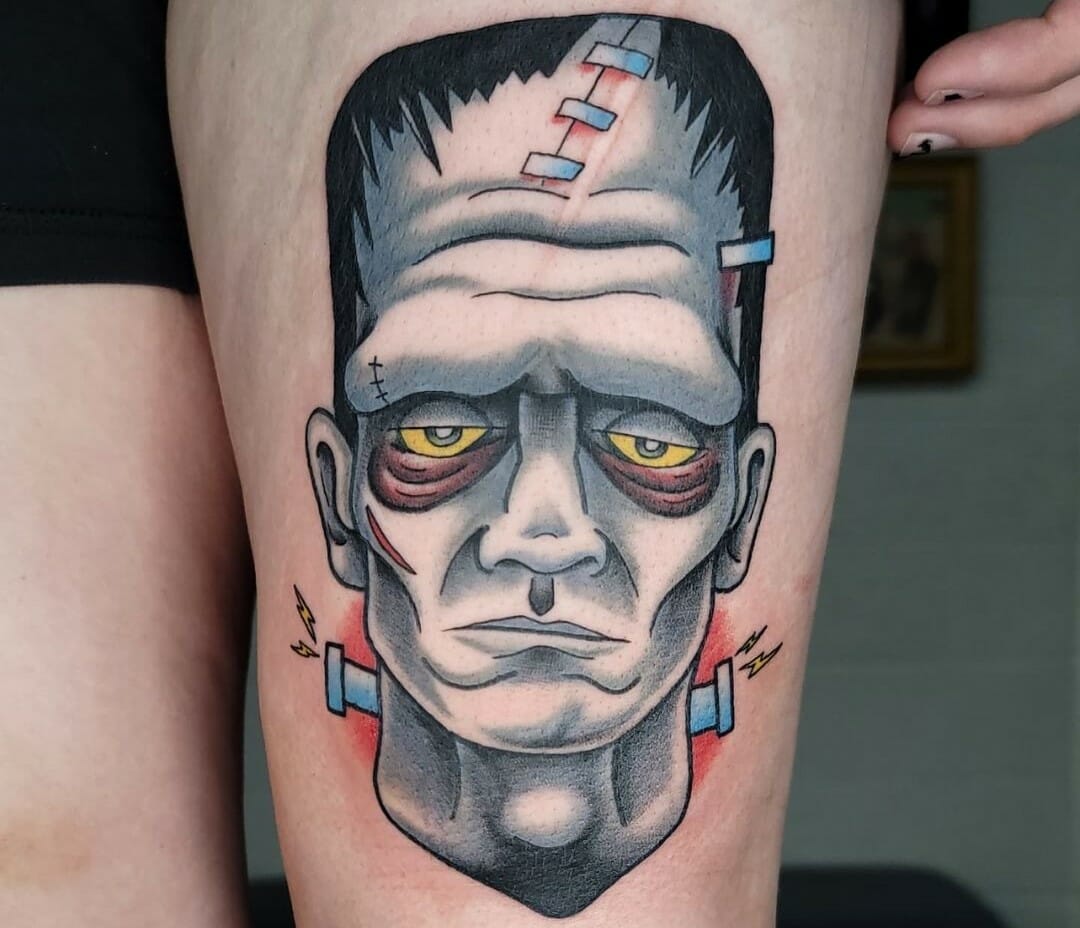 Frankenstein is a fictional creature, first introduced and created by Mary Shelley in 1818 in her popular novel ‘Frankenstein’.

Soon after the book’s release, the creature rapidly grew among the readers. Now, we can easily find a modern depiction of this monster-like creature in horror movies and animated movies.

The creature carries a weightage of its own. He was introduced as a monster that came to life after several experiments and soon realised that he was a misfit in this society. The popularity of this creature in recent times excited tattoo enthusiasts worldwide, and they started to flaunt it. However, the primary objective of getting the tattoo was to establish themselves as a misfit in a society that is bound and tied in a million shackles.

If you relate to the character of Frankenstein and love the idea of horror tattoos, consider checking out Chucky tattoos.

Frankenstein Tattoo For The Misfits

Frankenstein Tattoos have grown massively popular among tattoo enthusiasts after the depiction of this monster kept appearing in several animated movies. Soon the misfit built its place among the masses. One can take a lesson from this character: if you are a misfit in this society, be a proud one. There is no shame in being different from the rest.

We have successfully left the days of misfits being called weird. So, if you are someone who relates to this whole idea of being a misfit in this society, you should go ahead and flaunt it, and what is a better way of doing that than getting this unique design inked in your body. This tattoo will not just make a statement but will enhance your style.

For people who strive every day in search of something that will give them a separate identity and make them stand out from the rest because this design is a perfect choice. This Frankenstein design is itself different from other such tattoos.

The character of Frankenstein is generally painted in black and white by the tattoo artist because of its dark nature. However, the artist has managed to produce a strong image of the character by adding colors. The yellow eyes here not only represent confidence but also brings out a deadly look.

The use of fire in the background has also been intelligently placed to add a sense of boldness to the whole image.

The bride of Frankenstein tattoo can portray women empowerment and can easily diminish the biased idea of male superiority. The big, bold eyes of the bride and her determined facial expressions narrate a whole story through this simple tattoo. Even if you are a man, this design will not disappoint you; rather, it will tie up well with your already charismatic nature. The tattoo artist has also used Frankenstein’s spooky manor as a prime element in this tattoo, as it reflects upon the general attraction one feels towards their home no matter where or how it is. In addition, the manor adds an eerie or mysterious feel to the whole design as well.

The distinctive colours and its special design give this tattoo a very waggish, mischievous and roguish look. This design also has a peculiar build that distinguishes itself from other Frankenstein tattoos in general. The overall green colour makes the depiction of Frankenstein in this specific tattoo look like the ‘Hulk’ from the Marvel comics.

It is accompanied by a red forehead which presents the anger and rage of the monster. So, if you are in search of a design that mirrors your inner rage, then this tattoo will be appropriate for a person of your nature.

This tattoo design is most definitely one of the best portrayals of the monster and his bride together. Though this tattoo design looks incredible individually, bringing them together produces a far superior picture. Together it becomes more powerful and gives an eccentric look to your body.

These two characters’ involvement in children’s movies and animated shows has decreased their seriousness over the years. Still, these tattoos talk about the pain and suffering of the monster and his bride. The bruises and scars on their faces are the result of their dark origin and how time has treated them brutally.

However, the placement of these tattoos is crucial and should be chosen intelligently and cautiously to avoid damaging the magic of this tattoo.

Another depiction of traditional Frankenstein designs, this tattoo is beautifully inked down by the tattoo artist. It is very detailed in nature and the black ink used here perfectly highlights all the cuts and wrinkles of the monster.

Ideally, for your biceps, the tattoo has been built in such a style that it covers a large part of your body. It adds a gangster vibe to your image and gives you a sense of uber-cool while being classically cultured.

This style is not necessarily ideal only for a man, but the tattoo’s placement depends solely on how you want to carry this tattoo. The chest might also be a great place to get this tattoo done.

Intimate Tattoo Of Frankenstein And The Bride

The bride of Frankenstein was the first one to see the emotions carried by the monster. The intimacy between their character are well known among fans, and the tattoo artist has beautifully captured their emotion and reproduced it in his work. One might not easily get the complexity of their relationship, but many will understand the love that they share.

If you are one of those people whose heart melts down, just listening about deep affections, this design might give you what you are looking for.

As monster tattoos have a big fan base, it is not hard to find a million variations of monster tattoos. However, when it comes to Frankenstein tattoos, there are very few of them available.

This design has used multiple colours like green, purple, blue and orange to paint the perfect depiction of Frankenstein to avoid being similar to other black and white Frankenstein tattoos. It is not that black and white tattoos are boring, but the vibrant colours create a diverse image of your characteristics, making you and your style stand out among others.

Well, like many monster tattoos, this tattoo also makes you look badass. It is designed like a glove and can be worn to symbolise your daring and strict nature.

The bruises in Frankenstein’s face though matches with other similar depiction, the detailing of the picture will surely leave a deep impact on people. So if you are in search of something that would distinguish you and your style from other people, this design will suit you perfectly.

Minimalistic Tattoo Of Frankenstein For The Calm And Composed

This tattoo is very minimalistic and simple, and that is its beauty. Unlike similar depictions of the monster, Frankenstein’s eyes in this picture have been left closed, making it appear as if it is in a deep meditating state.

The purpose of this tattoo is not just to leave people amazed but as a reminder for you to remain calm and composed during trying times, not to give in to struggles.

Here are some similar tattoo ideas that you might enjoy: