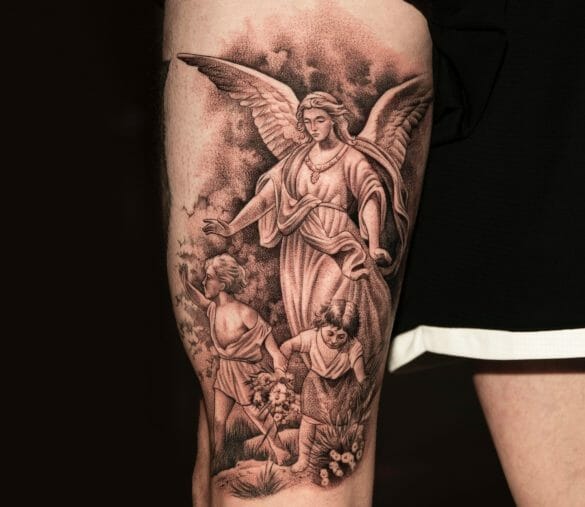 Guardian Angel tattoos are considered one of the best ways to honor your religion and God. However, you do not have to be religious to get one of these beautiful tattoos.

Angel Tattoo designs incorporate different meanings like beauty, strength, innocence, birth, remembrance, and prayer. If you are a religious Christian and want a particularly religious Angel tattoo you can add across to the design. The wings of the Guardian Angel symbolize your tribute to God and his messengers while also asking for guidance and protection. One of the most common places to get such a tattoo is the back. Because of the large surface area, the wings can be beautifully spread. Other common placements of this design are the arm, chest, or shoulder. Angel tattoos could also mean something very different, like pain, suffering, or even rebellion. These meanings are generally signified by an Angel of death or a warrior angel. A warrior Angel tattoo represents personal strength and gives the inspiration to overcome difficult challenges in life.

Among these Angel tattoos, black and grey color is very common and considered classic. If required, you can add other elements and colors to this to make it look more appealing. Guardian Angel tattoos are generally versatile designs, so the process of this tattoo making is very simple. First, you need to select your design. You need to select your colors and then select the placement on the body. Once everything is final, you get your beautiful Angel tattoo.

To make your work easier, we have curated a list of amazing Angel tattoo designs just for you.

According to Episcopal and Anglican traditions, Jophiel was considered one of the archangels. She is depicted on the stained glass in churches holding a flaming sword. She is also listed as one of the seven Archangels and is quite popular as well. She is one of the few angels who is recognized as a female. Angels generally have no specific gender or are most commonly referred to with male pronouns.

This particular tattoo is a beautiful design of a Guardian Angel. The tattoo artist has done a marvelous job with the intricacy of the design and the fine line strokes. The wings and the hair have very distinctive features and look extraordinary. The artist has used colors like black and grey to complete this design. It has been placed on the arm, however, it can be placed on any part of the body because of its versatility.

This design is one of the most beautiful guardian angel tattoo designs that you will find on the internet. Not only does this tattoo design have amazing artwork, but it also has a mandala tattoo around it. The mandala has an amazing significance in the design. It represents the balance of mind and body. The mandala adds to the element of the design and makes it more appealing.

This tattoo also has the number 33 written below it. It is an angel number and has a spiritual significance. It is used to represent the changes in one’s love life, professional as well as personal life, and it also helps to maintain a healthy mind.

The tattoo artist has used fine lines of black and grey ink to complete this design. The detailing and intricacy of this tattoo stand out. It is placed on the nape of the neck, however, it can be placed on any part of the body because it is a versatile design.

This is a beautiful guardian angel tattoo design. The prominent feature of this design is the wings of the angel. It is one of the most famous religious symbols of faith, protection, and freedom. In many cultures, angel wings are also used as a means to honor someone who has passed because they are considered as guardian angels who will look upon them from the afterlife.

This beautiful design is a sign of spiritual protection. The intricate lines and detailing of this design is done with black and grey ink. The Angel appears to be in a sitting position and her wings are open. This design has been placed on the arm, but can be placed anywhere else on the body.

A sad Angel Tattoo is also known as a fallen Angel tattoo and it is a representation of the loss and struggle of Paradise. People who like to go for this design usually have lost something or someone special in their lives. Generally, these designs are made with the Angel sitting or kneeling with her head down.

This tattoo is a beautiful design made by the artist. He has used colours like black and grey for the most of the tattoo, while to make the Angel and a few of the feathers the artist used a light shade of brown. If you believe in angels as a sign of protection, then this could be your next tattoo.

This particular design by the tattoo artist looks magnificent. The detailing and the intricacy of this design is very on point. The artist has used thin strokes of black ink to make the outline of the warrior Angel and her wings. He has been used shades of light brown, black, and grey to fill in the design. If you’re looking for a cool and trendy tattoo, this design is the one to go for.

An angel tattoo is generally seen as a messenger of God. They are often related to a person’s spirituality and religion. They are also often seen as a representation of love, doubt, and wrath. A person need not be religious to make such a design.

This tattoo design is particularly different from other designs. Other designs do not have the features of the Angel well represented. However, in this design the features are very well formed. The strokes of the feathers is very intricately designed. The tattoo artist has used colours like black and grey to complete this design.

A guardian Angel tattoo is a symbolism of protection from evil. People who like to get these tattoos, generally are religious in nature. However, one does not have to be particularly religious to get an Angel tattoo.

This particular design is of a guardian Angel with her wings spread wide. The tattoo artist has used fine line strokes of black ink to make the outlines of this design. They have used colours like black and Gray to complete the shading of the day. In some areas, the artist has also used dot work design. To give it a realistic effect, the candles that the Angel is holding is emitting light which has been clearly depicted.

This particular tattoo design has a very strong resemblance to Valkyrie. Valkyrie is essentially the Angel of Death who are also servants to the gods Freyja and Odin. They are also brave soldiers who also fight till they die in battles. Getting a Valkyrie tattoo design is a sign of bravery.

The tattoo artist has used colors like black and brown to complete this design. To give it a realistic sketch feel, the artist has used shading work inside and has use think strokes of black ink to complete the borders. The design has been formed with a lot of intricate lines. If you want to design that shows your bravery, then this warrior angel tattoo is something you should for.

In this tattoo design, you will see that the wings of the Angel are spread widely. This is meant to show that God has created Beautiful Creatures on this planet to protect us from evil. The wings also show the ability of the angels to fly. The Angel Wings are a symbolism of purity as well as courage.

The tattoo artist has used fine line walk and shading to complete this tattoo design with black and grey ink. The intricate strokes beautifully represent each aspect of this design.

There are different types of Angel tattoo designs which appeal to different people. There are some simple designs with an Angel and widespread wings, and there are some complicated designs which have other elements like fire, water or even clouds in them. This particular tattoo design shows an Angel whose wings are spread wide and in the background there is something like fire. The tattoo artist has used fine line work and dot work art to complete this design with black and grey ink. If you are looking for a beautiful Angel tattoo design, then this is definitely the one for you.

Angel tattoos are fairly larger designs and can be a huge commitment for someone. It is necessary for people to choose their designs wisely and then get them inked. If you are a little skeptical about getting a permanent large black and grey tattoo, then you can go for a temporary one and then ask your tattoo artist to convert it into a permanent one later on. We hope that you liked the designs mentioned above. However, if you want to explore further, you can also look at –

What is the meaning of a female protector guardian angel tattoo?

What are some of the best design ideas for a female protector guardian angel tattoo?

There are many different design ideas for a female protector guardian angel tattoo. Some of the more popular designs include a detailed portrait of an angel with wings and a halo, often surrounded by clouds or stars. Other variations may feature symbols like a cross, dove, heart, or rose to represent protection and love. Additionally, some tattoos feature verses from the Bible or words of encouragement. Some more creative design ideas include an angel wearing a warrior’s helmet, holding a shield and sword, or being surrounded by symbols of protection such as flowers and stars. Whatever design you choose should ultimately be personal and meaningful to you – it’s important to take time to find a design that resonates with you and reflects the protection and safety that an angel provides.

How much will my female protector guardian angel tattoo cost?

The cost of a female protector guardian angel tattoo will depend on the size, complexity, and artist you choose. Generally speaking, larger or more detailed tattoos can cost significantly more than smaller ones. Additionally, some artists may charge an hourly rate instead of per piece. It’s important to shop around for tattoo artists in your area who specialize in the type of artwork you’re looking for and have a good reputation. Ultimately, it’s best to speak with tattoo artists directly to get an estimate on cost before deciding to move forward with your design.