10 Best Ankh And Eye Of Ra Tattoo Ideas You’ll Have To See To Believe! 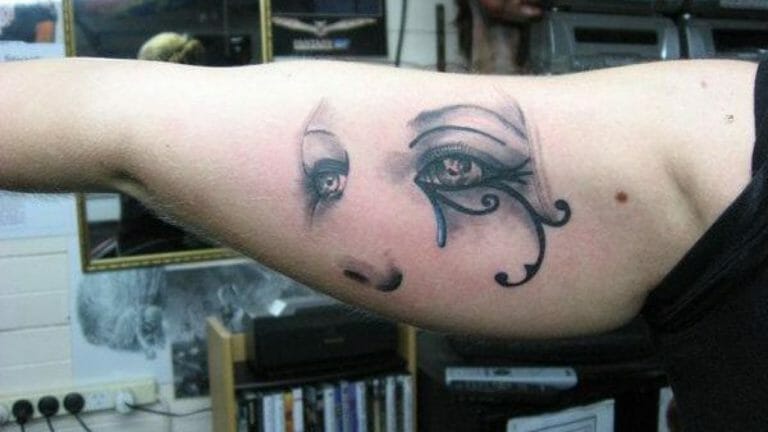 Looking for some good Egyptian tattoos? Then look no further, as here we have brought you the best of ankh and Eye of Ra tattoo.

If you love Egypt, then these amazing Egpytian-inspired tattoos can put your beliefs on your skin.

Many people opt for Egyptian designs and two of such designs are ankh and Eye of Ra. If you have ever wondered about the ankh meaning, it represents life itself and even eternal life in Egypt. The Eye of Ra or also known as the Eye of Re, on the other hand, is the eye of the sun God, Ra and Egyptians used its symbol as protection one time. Choose your favourite Eye of Ra tattoo from the list below.

Eye Of Ra And Ankh Tattoo

As the symbol of Ankh, the key of life itself also represents the sun, air and water, it can be seen together with the Eye of Ra symbol many times. Many people these days have tattoos of these two symbols incorporated together.

You can have a classic Eye of Ra in the middle of the Ankh symbol as the tattoo in the picture on the back of the neck. You can also mix it up by including some other ancient Egyptian designs if you want to make it look more vibrant.

Sometimes simple plain tattoos can be quite appealing. Simple tattoos are usually void of any additional design other than the symbol or design people are going for. It just contains an outline of the shape of the design, and it can be perfect for people who are not looking to ink a large portion of their body.

In the picture, we can see the perfect example of a small ankh and Eye of Ra design with no other additional designs. This behind the ear small tattoo looks pretty charming. You can also go for simple outlines of the design instead for your minimalistic tattoo.

Tribal designs are unique. These tattoos tell the story of the communities and people of that community. Even though these tattoos are usually different for each community, there is still a pattern to tribal tattoos.

You can see one example of such a tattoo of the Eye of Ra and ankh in the picture. Take inspiration and have your own unique and new style of the tribal tattoo of ankh and Eye of Ra.

Eye Of Ra And Horus With Ankh Tattoo Design

People often get confused between the Eye of Ra and the Eye of Horus. The two eyes belong to two different Gods. Ra was the Sun God and Horus was the God of sky and kingship. Both eyes hold great value in the mythological tales and in the lives of Ancient Egyptians.

You could have a tattoo of both the eyes with the symbol of ankh as it’s shown in the picture on the chest. It certainly looks cool. You can also tweak the design if you want and come up with your own unique one.

Eye Of Ra On Falcon With Ankh Tattoo Design

Eye of Ra is said to be a stylized eye of a human or a falcon. Falcons represent victory, vision and freedom. With that in mind, incorporating the falcon with these two symbols can give a new meaning to your tattoo.

You can incorporate the Eye of Ra tattoo on a falcon, like the one in the picture and put the ankh tattoo aside. You can try different designs by taking inspiration from this one.

Ankh represents the key of life and in Ancient Egypt, was also known as the key of the Nile. Ankh has been seen with some ancient Egyptian Gods like Ra, Isis, and Osiris.

You can do a simple ankh tattoo on your body or include some designs to make it more beautiful as it’s shown in the picture on the back of the man. You can include some modern abstract designs or you can also include some ancient Egyptian designs.

According to the mythology of ancient Egypt, the Eye of Ra is the eye of the Sun God. It’s also known as the Eye of Re. The eye is thought of as the extension of the power of the sun God, Ra. Egyptians and followers of the Gods have used the Eye of Ra as a protection to their homes, temples and the Pharaoh.

You can have a simple Eye of Ra tattoo with no additional patterns. You can also have the symbol inside of the sun and make a beautiful design out of it like the picture above.

Eye Of Ra And Eye of Horus Tattoos

The tattoo in the picture shows the Eye of Ra tattoo on the right hand, and the Eye of Horus tattoo on the left hand. Getting an accurate tattoo of both the eyes like this can look extremely cool. You can introduce some more patterns to it to make it look cooler.

Ankh And Eye Of Horus Tattoo

Egyptian mythology has given us many Gods and Goddesses, such as Isis, Osiris, Set, the brother of Osiris, Hathor, Ra, Anubis, Ptah, and more. Some of these deities can even be seen holding the ankh in their pictures.

Get your own unique Egyptian tattoo by incorporating tattoos of Egyptian deities in ankh and Eye of Ra tattoos, as it’s shown in the picture. Anubis can be seen in the picture with both the ankh and the Eye of Ra.

Now that you know about these tattoos and if you love any of them, get a good tattoo art of your own. Whether you ink them on your neck, chest, or back, they will look cool everywhere.