10 Best Dorohedoro Tattoo Ideas That Will Blow Your Mind! 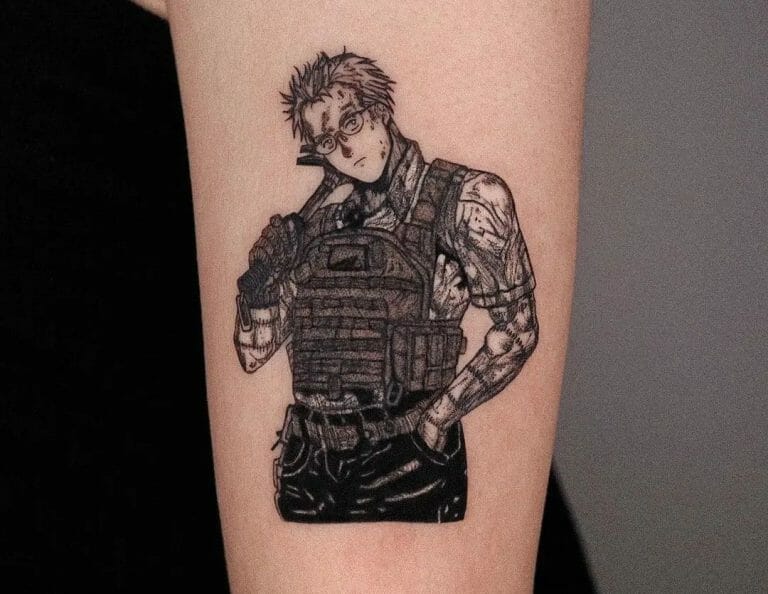 In search of tattoo ideas that express your love for Dorohedoro? Here we have the top 10 Dorohedoro tattoo designs that will agree with your fancy!

Dorohedoro has spiked up the interests of otakus all over the world to such an extent that this year witnessed a huge rush of content in the tattoo industry.

Mostly drawing inspiration from the recently launched anime series on Netflix, analytics reveal that there is a huge influx of attention on the anime owing to the effectiveness of videos. With more people opting to get themselves inked with quality designs, it is on us tattooers to deliver appealing content and information that will agree with your ways.

And so have the artists all over the globe coming up with a number of measures to increase the effectiveness and link between anime and body art. It is truly amazing how the on-screen visual data can be set on the skin, and more so in the case of Dorohedoro! The grimness of the place Hole where the experimented specimens and thrown away to live a dehumanised life is a great background for the emergence of a hero, Kaiman. Kaiman, or Caiman, is on his way to find the sorcerer who jeopardised his life and wishes to seek revenge and regain his real self and life. But the process is equally grim and alarming for others, making a treat for all anime lovers. Keep reading to find out how you can bring your fancy with Dorohedoro to life!

This is how we first see Kaiman while he controls the fate of the sorcerers in his periphery. The humongous stature of this man turned into a reptile with a thorny head helps to bring immediate attention to his activity. Here the artist paints a ghastly image of a giant in black and red that looks dangerous. The intricate shading in this work increases its visual appeal. Moreover, the rectangular frame that he is enclosed in comments further on the design, giving the tattoo its necessary background.

Kaiman looooves gyoza and especially the ones that Nikaido makes for him. The partners in revenge are also partners in food relishing the quality with each bite. The artist here captures Kaiman while he is engaged in his favourite activity. Notice the detailing on his scales and the insides of his mouth that are so similar to the way we witness in the videos! The use of colour enhances the design even better, enabling the look to reach sky-high.

Fans of Dorohedoro sure do love Kaiman’s gas mask that he wears as a measure to cover up his reptilian face. You can also improve the lone gas mask with Kaiman’s profile for a full picture, like this tattoo over here. Play around with colours barring the shading and get yourself an attractive piece that pops up no matter its placement.

If you love Dorohedoro to an uncomfortable extent, this back tattoo is here to make things better! Although time-consuming, the tattoo content strives to deliver the major characters within a single frame, each with their quirks and paired with their partners. For instance, without Nikaido, Dorohedoro and Kaiman are truly incomplete. The same goes with Noi and Shin who work as partners in cleaning up. Improve the look of your back tattoo with proper shading and detail to the characters and watch the beauty of Dorohedoro unfold on your body.

Lovers of Dorohedoro will agree on how cool Shin is with his stealthy combat controls. But what appeals to the audience more is the way he maintains a cool composure throughout the activity, batting only an eye at his target. That is how effortless this blackwork tattoo design looks! Endowed with a fair share of detail, the artist follows the real portrait of Shin from the manga and builds further on those things.

Or you can go for Shin’s bright red mask that is both so adorable and far removed from his persona. The blotches of black improve the portrayal of the mask, imparting a bit of 3D illusion to the design.

This Dorohedoro sleeve tattoo features the red-headed mushroom sorcerer in his glory. The presence of red in the majority of his stature pops up against the skin and comments on the artistry of the piece. The various coloured mushrooms below make us visit the man in his true elements, providing a glimpse of the way of things in his den.

Or you can go for a much smaller and compact piece if you are saving your sleeve for something else. Painted in black and grey, this En will agree with your search for small designs and at the same time deliver a pitch-perfect portrayal of the character.

Kaiman’s favourite deserves special attention when we are talking about Dorohedoro tattoos. Gyoza controls Kaiman’s moods and could possibly turn a gloomy day into a better one. This gyoza fairy is dressed in its wheatish garb with folds and touches of shading colouring its ways. Get this cute tattoo on your limbs for a great show of affection for the anime.

The Devil House is a dark place where the characters visit at one point or the other, signing contracts with devils. There is not much data on the house or the entity yet but more content is expected in the future. The overall design in black comments on the touch of ominosity that lurks amidst things. If you agree with what goes on inside or are anticipating more happenings related to the entity, this tattoo might just be the perfect fit for you.

Fans cannot possibly get enough of this scene from the anime that alludes back to the first interaction between Kaiman and Ebisu. Equally funny in its measure, this scene unfolds a lot of data that was to be revealed later. You can practically witness the young sorcerer being bullied by Kaiman, mere moments before disaster. The design in black and grey controls a majority of the visual appeal that you see here. Get this tattoo on your forearm like is shown in the picture for a fair show of the fanatic that you are.

Comic book pages are a delight to get inked with, especially when the scenes measure or enhance the gravity of the plot. This thigh tattoo paints a detailed picture of the manga content with much precision. The scene comments on the partnership between Kaiman and Nikaido at its best, while making an apt tattoo motif that fans will agree with.

A toe-curlingly hilarious scene, this one features Ebisu in her disoriented phases. The skull mask on a barely clothed body controls the humour of the scene, showing blunders with Ebisu. Get this tattoo on your calves to do complete justice to the comic.

Ebisu’s iconic skull mask is enough for you to make a statement Dorohedoro tattoo. Intricately detailed, this skull tattoo focuses on the nitty-gritty of the mask as is shown in the comics. The close attention to detail controls the grace of this design. You can get this tattoo anywhere on your body and it will not disappoint!

Dorohedoro fans are all over tattooing their favourite characters and scenes from the anime or the manga only to etch the memory of such a phenomenal creation forever. You can either improvise on the data that we have listed here or can go on brainstorming for a truly unique tattoo design. The following are some suggestions to ease some trouble: