10 Best Diver Tattoo Ideas That Will Blow Your Mind! 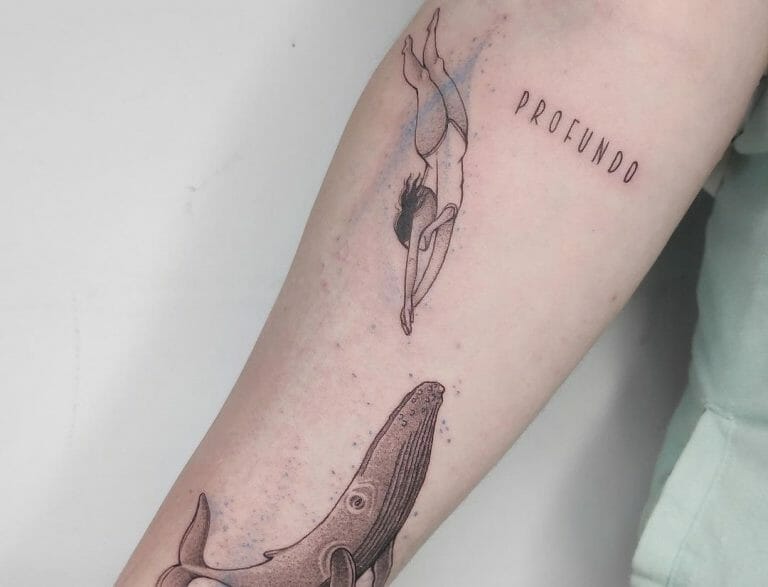 If you are someone who loves the ocean and marine life and is into extreme adventurous sports, then these scuba diver tattoo designs are definitely for you.

Scuba diving is an adventurous and adrenaline rushing sport or discipline practised by millions worldwide.

Diving has been identified as one of those more demanding sport that requires a lot of effort, concentration, and courage as well as a lot of practice. This dangerous sport also entails life-threatening risks and drastic limits of exploring the ocean bed while being exposed to dangerous marine creatures.

While the love for your passion for scuba diving can be manifested in a lot of ways, some scuba diving enthusiasts take up tattooing their bodies to show it. This specially curated list of scuba diving tattoos aims to compile some of the best diving tattoos available out there from such passionate divers to choose from.

The American traditional female scuba diver body art makes use of a wider range of tattoo ink palette that is vibrant and rich along with bold, black outlines that separate it from other traditional tattoos. The tattoos mostly have very retro features, feel, and look that portrays a woman diver in a modest swimsuit. Diving, as a sport, has always been associated with men, though we have seen equal participation from women too. This traditional woman diver tattoo has a compelling meaning associated with the tattoo design. This woman diver tattoo is a strong representation of women power and femininity and can be seen as a celebration of the female form along with being cute tattoos for females.

The old diving suit that was used for relatively deep underwater work, such as civil engineering, marine salvage, or other forms of commercial diving work, consisted usually of a diving helmet made of brass, copper, or bronze, and a waterproof canvas suit. The standard diving suit also had other pieces of equipment such as weights to neutralise buoyancy, diving knives, and accessories for breathing. While today the traditional diving suit has been replaced with suits that are lighter, more efficient, and comfortable, most scuba diving enthusiasts still opt for the vintage diving suits of the old days. Even today, the oversized caged helmets from the early twentieth century have not lost their appeal and still make their way into the modern scuba diving tattoo designs. This vintage deep-sea diver suit shows all the minute details and more through the use of classic black and grey tattoo ink colours and extensive shading techniques.

While most of the scuba tattoo designs on this specially curated list of diving tattoos are large and complex and hence appealing to seasonal tattoo enthusiasts, they might prove a bit too overwhelming for those getting inked for the first time. Such a large and complex piece of body art requires a lot of time, money, and commitment, thus making it wholly unsuitable for first-timers. However, minimal tattoo designs have been in vogue lately because they provide the same style quotient despite their small and minimalistic approach and hence are apt for first-timers or those who are on a shoestring budget. These minimal scuba diver tattoos make use of only black ink to portray a diver exploring the depths of the ocean and the geometric designs add to the cool quotient of the tattoo.

The vintage or the standard diving helmet was usually made of metals such as bronze, brass, or copper and had provisions for oxygen to breathe when exploring the depths of the ocean or sea. While scuba diving as a sport had advanced with the advent of new technology, diving enthusiasts still opt for traditional scuba tattoo designs that feature the vintage diving suit, or the old copper helmet. This outline tattoo of ancient scuba diving is a prime example of this practice.

This realistic and traditional deep-sea diver tattoo makes use of expert shading techniques as well as black, grey, and white tattoo ink colours to deliver a striking piece of body art that is sure to catch the attention as soon as you enter a room. This scuba diver leg tattoo shows a traditional diver in action as he hunts fish while exploring the ocean bed.

Like most traditional tattoo designs, this traditional tattoo makes use of rich, vibrant tattoo ink colours and bold lines to show an octopus wearing a vintage scuba diving helmet. The use of red ink to draw the copper helmet and green to draw the tentacles give the tattoo a striking look that is sure to turn heads when in public.

This amazing diver tattoo showcases the extreme danger an adventurous sport like scuba diving entails as a diver comes face to face with a gigantic whale when underwater. You will almost always come across tales of scuba divers meeting maritime life underwater and this tattoo pays homage to that as it makes use of minimal shading techniques and geometric designs to portray the thrills of scuba diving. Go for this diver tattoo if you have experienced such an ordeal while exploring the ocean bed or looking forward to such adrenaline rushing situations.

While realistic diver tattoos have a natural appeal amongst scuba diving enthusiasts, a cartoon-themed scuba diving tattoo has its own appeal. The use of vibrant hues and extensive shading techniques combined with the goofy look of the tattoo makes for a brilliant piece of body art that is not only unique in appearance but will also lend a certain appeal to your overall fashion and style statement.

Mermaids feature in tales of almost all sea-men and sailors, and scuba diving is no exception! While these mythical creatures may not exist, many scuba diving enthusiasts will tell you a story or two involving these seductive creatures that are notorious for luring sea-men. This beautiful diver tattoo shows a scuba diver and a mermaid kissing underwater as the ill-famed creature pulls the scuba diver to his demise. This diver tattoo might serve as a word of caution to all those scuba diving enthusiasts to steer away from mermaids if they ever come across one in any of their underwater exploits.

Another example of minimal tattoo designs, this scuba diver outline tattoo is apt for those getting a tattoo for the first time or are on a tight budget. This simple tattoo portrays a scuba diver in action through the use of minimal shading and just drawing the outline as he explores the depth of the ocean in his scuba diving suit.

As always, go for an experienced and professional tattoo artist while getting inked in order to avoid future skin complexities and also to get the best result. Hope this article has been useful for you. Happy inking!