101 Best Cloud Tattoo Ideas You’ll Have To See To Believe! 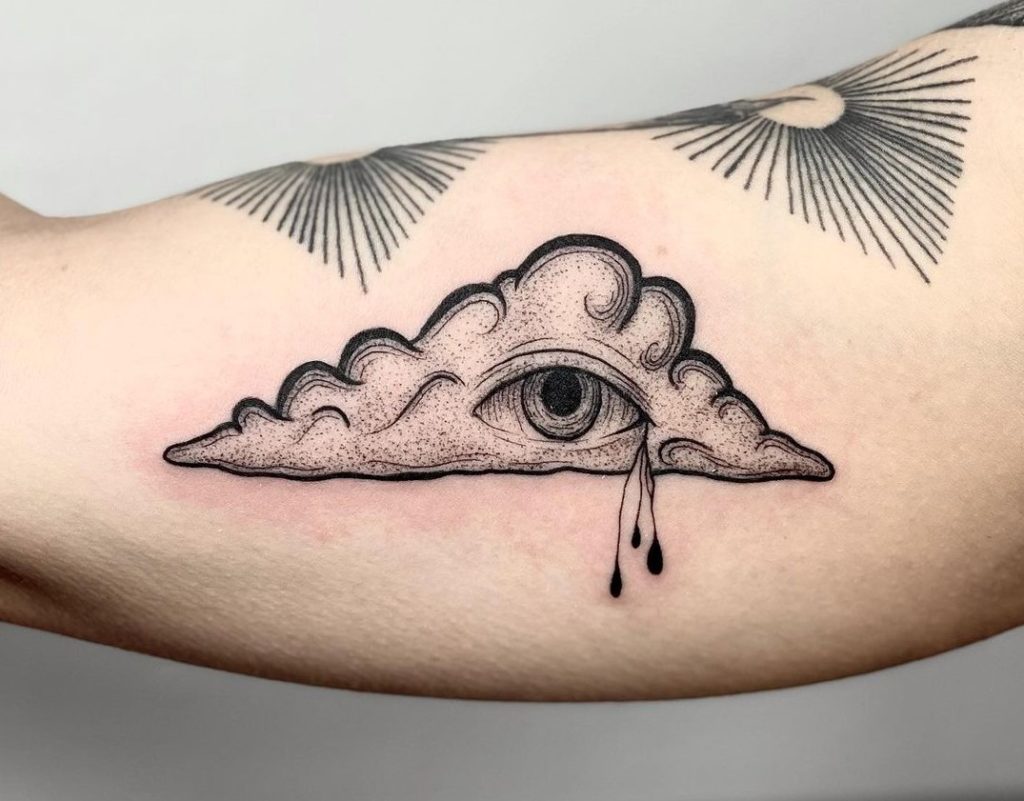 Feel like you are free like clouds in the sky? Here are the best cloud tattoo designs and cloud tattoo ideas you’ll ever find in this list compiled by us.

A cloud tattoo design has endless possibilities, and you can let your creativity fly high and run wild with it.

The element of lightning joins forces with cloud tattoos to represent the ultimate power of a cloud.

In other religions and cultures, clouds and rains symbolize fertility. Western Tattoo art depicts clouds in a more realistic manner, where the tattoo artist use eye-catching elements and ideas like the sun, the moon and the stars. However, Japanese tattoo art uses these forms differently they use intricate lines, turns and curls to paint their clouds, similar to the Chinese interpretations.

The idea of cloud tattoos also has a hint of mysticism with hidden meanings and a sense of mystery.

A rainbow cloud tattoo has several meanings, some of which might appear simple but, if interpreted carefully, would add ideas to your ink beyond your imagination. Firstly, it represents sexual diversity and stands as a symbol for the LGBTQ community; in that sense, it is very normal for someone to interpret a rainbow cloud tattoo as something that symbolizes your sexuality.

In symbolic form, it also represents all the good and positive things that come right after a heavy shower. If one considers rain as sorrow, then the rainbow in that context symbolizes positivity. Here, the rainbow tattoo is made cuter with the use of a teddy bear going down the rainbow tattoo like it is a slide.

A tattoo design like this also represents the diversity in human nature for both men and women. It will add more charm to whoever chooses to get these tattoos.

Cloud Tattoo Design For The Powerful

Cloud tattoo designs are considered only for their style but are rarely considered as art. However, this is a powerful tattoo design with deep shading used to make the cloud appear menacing as if it is God speaking.

This cloud tattoo has far more potential than is expected from a cloud tattoo. This tattoo design uses strong blackwork. The elements of moon, star and a person adds character and represents the powerful message. Along with that, there is a quote that glorifies God.

If you want to show off your courage, and believe your presence is as strong as a storm, then this design would work for you.

Many of us love cats and it’d be great if we can add the cat element to our tattoo designs.

A cloud tattoo design can be made different from other tattoos by the power of imagination. The tattoo artist has used the cloud to cover a cat and make it seem like the cat is almost playing with the clouds around the animal. Besides being incredibly cute, the picture gives very fantasy-esque imagery and is perfect for a tattoo.

If you are a cat lover, the cat tattoo in clouds can be a great one. Plus, if you had lost a cat, then this is a great cat tattoo that can be used as a memory.

Tattoos from different cultures show how universal art is. This detailed tattoo is a wonderful choice if you love anime and Japanese culture. The curved clouds with a dark background and accompanied by the pink flowers make this tattoo a one-of-a-kind tattoo.

One of the most appealing parts of the tattoo is that it is imprinted on a curtain, giving the tattoo a new dimension.

The rising sun at the end of the high peeked mountains gives a feeling of reaching out to the sky through the tattoo. Even if we do not dive into the rest of the elements used, we can surely say that this cloud tattoo design is also just very peaceful to look at.

We all know that nature calms us down; living close to natural elements is always a better option than in crowded cities, and this piece of art contains all the constituents of nature, the sun, mountains, clouds and trees. The only thing missing from the frame are birds, but the absence of birds doesn’t alter what it stands for.

Your arm would preferably be the best choice to get this ink.

Cloud tattoo designs have evolved with time, and tattoos have become more common using dark elements in the cloud. Earlier, we only used to find skull images or the devil’s head in tattoos designed in gothic theme; however, using the demon’s head as a symbol of daredevil has become very usual. The dark theme can be a great way to bring a new element to the tattoo.

These can be great tattoos for bikers, racers or stunt performers, who are daring enough to face the demon and be brave about it.

The beauty of this cloud tattoo lies in the colours used. We don’t generally see men having colourful tattoos, but this one is different. The use of simple but intricate lines has enhanced the idea behind this tattoo.

So, though the tattoo appears to be minimalistic in nature, it is evident how the correct choice of colours can affect the concept and all the ideas behind it.

Tattoo enthusiasts in search of diverse tattoos can opt for other meaningful ideas for themselves.

Cloud Tattoo Of A Whale

The whale is an endangered animal but we all know how the whale used to conquer the seas and is associated with adventures on the sea. If you a fan of Moby Dick and love whales, then a whale cloud tattoo can be a great choice. Whales are magnificent animals and while they may be the rulers of the sea, you can use a tattoo to make them the ruler of the skies too. It can be a great design for your arm and you don’t have to go for colours to opt for the cloud design. Since whales are endangered, this tattoo can also be a great example of a cloud tattoo which signifies how we are fast losing whales from our ocean and we need to be mindful of poaching or the loss of habitat.

Cloud tattoos can be made even better if you can add different elements to them. Mostly, cloud tattoos have a sun in the background and maybe add rain to make it look realistic. But all cloud tattoo does not need to go for stereotypical elements.You can also opt for something like a sword piercing through the cloud. The addition of the moon and the stars make the cloud tattoo more appealing on the whole and gives it a different life-like feature. But the most eye-catching part of the tattoo has to be the design on the hilt of the dagger. With the rubies and other jewels present in the dagger, there is a little bit of a gothic feel to it. If you choose to add a storm like background. thunder and a skull, it can create a new tattoo sensation, even though the tattoo is in black and white.

To show off your love for gothic culture and its ideas, you should definitely give this one a try.

Cloud Tattoo Of The Stairway To Heaven

Clouds will always be directly related to the concept of heaven, and ultimately cloud tattoos can symbolize the stairways to heaven. The aesthetic design of the staircase in this tattoo has given the ink a mystical look, and the absence of any colours gives the art a new look.

The design here can also work as an example or an eye-opener of the fact that no matter how much we fantasize or dream about the beauty of the clouds, it ultimately leads us to a life after death.

Here are few other suggestions you might enjoy checking out.