10 Best Lightning Tattoo Ideas You Have To See To Believe! 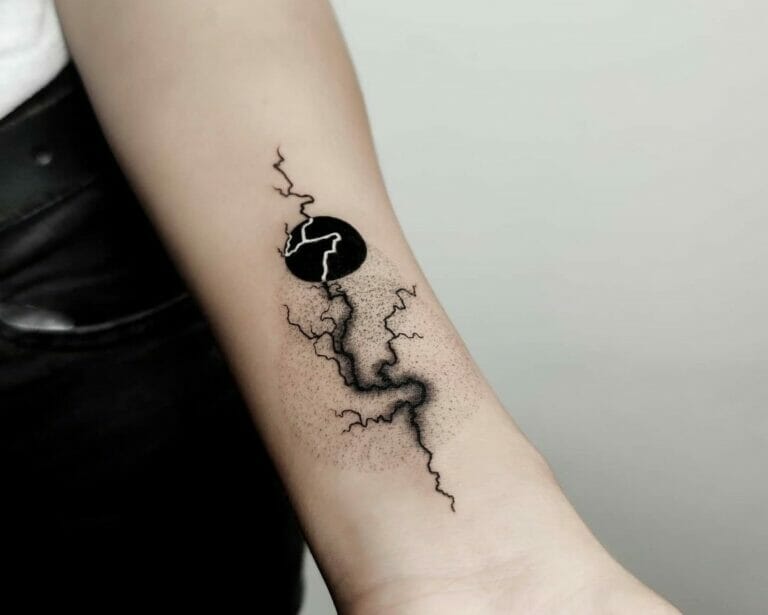 If you are looking for the best lightning tattoos to bring power to your life, this is the right place to find striking tattoos symbolizing thunderbolts.

Lightning was symbolised in ancient Greek Mythology as well. Zeus, the god of the Olympians, is known to use lightning bolts as his weapon and symbolized the cunning nature of humanity.

Even from those ages, people often relate lightning bolts as a great symbol of power. Today these electrifying tattoos of lightning have become a part of pop culture and fashion. More and more creative and artistic turns of lightning tattoo design ideas are emerging. Also, people can buy temporary lightning bolt tattoo stickers if they prefer that.

If you want to strike affection in the hearts of people, explore these lovely lightning tattoo design ideas to inspire yours!

This simple lightning bolt symbol, which resembles a lightning bolt logo is inspiring in its simplicity. Lightning sign or symbol is said to bring out more confidence and belief in young as well as older minds, making them bold. The lightning bolt is given a dark black color inside a thick outline. This design could be placed anywhere on your body, like the arms or wrist. You can fill this lightning flash with colors or get a similar sketch effect in a single, bright colour. Just like how a lightning bolt is powerful, this sign of lightning tattoo is used to show power. Harry Potter fans could get this tattoo to signify their favourite character, the boy who lived. The design is similar to the lightning bolt scar on Harry’s forehead. It signifies Harry’s source of courage that helped him stand strong and survive against Voldemort.

If you want a lightning strikes tattoo on your back, this is one of the most alluring and sexiest tattoos that you should check out. Create these patterns in your skin to give a feel of bringing out the storm and thunder. This freehand lightning tattoo inked in thick, black lines and a stunning finish. In this tattoo, the lightning strikes at the top of the back and spreads across the lower back. Lightning bolts accompany storms and thunder. Similarly, if you show courage, it is often accompanied with great things in your life and future. Just like the design here, everything that comes from a single stream can split into two paths. Another intuition that the tattoo gives is, everything has two sides, the good and the bad, the easy and the tough, the smooth and rough, etc. So it’s all up to us to embrace the right one. You can flaunt this lightning tattoo at the beach, paired with fashionable outfits.

This lightning tattoo can show how dangerous, scary, and striking a lightning strike could be. Rain, clouds, rocks, storms, thunder, lightning are all the primal forces in nature. The design of this tattoo style is how we see storms coming up in the sky. It is quite a different approach from other normal lightning tattoo designs. Not only does this design show how unpredictable storm and lightning can be, but it also has a space view of this magnificent phenomenon. This realistic lightning storm tattoo is done in black and red ink. Lightning tattoos give a message to mankind to get over his fear and see the truth of life. You can place this lightning tattoo on the center of your torso or rib, as show in the image.

A Single Branch Of Thunder Bolt

This lightning bolt tattoo design is quite similar to a root branch, more like a taproot structure. With the black lines or roots growing from the main branch, spreading out into smaller branches. The lightning bolt is drawn in fine, prominent black lines. This lightning bolt tattoo meaning could be that everything in this world comes from nature and goes back to it. The source is all the same. Energy is never created nor destroyed. Energy changes from one form to another.Everything moves in a single branch, and if it turns into many, chaos is what will be waiting for it on the other side. Similarly one should follow a straight plan ahead, and not try to go through uneven and false methods to get success in life. This lightning bug tattoo shows a mixed combination of truth. Lightning bolt tattoos can represent Greek mythology and culture. However, in recent years, pop culture has influenced many tattoo lovers to get a lightning tattoo. Marvel’s Thor, the God of thunder, is often depicted with a similar lightning bolt! You can place this tattoo on the wrist, as shown here, or the forearm, bicep or ankle, as well.

Lichtenberg figures which are a pathognomic skin sign caused by a lightning strike injury, and are now considered one of the coolest tattoo designs because of lightning pattern. In this tattoo, the branching patterns are drawn around the neck and chest area, like a lightning bolt tattoo design. The natural marks caused by electricity surge on blood vessels that cause them to burst can disappear after some days. These lightning tattoo designs appear like roots with branches growing all over the body. You can mirror the red colour in this image, or opt for a dashing purple colour.

If you want a lightning thunderbolt tattoo that depicts beauty and power, then you will love this striking tattoo design. Simple yet beautiful, this tattoo shows a little essence of hope too. With colorful three roses of red, pink, and violet inside the lightning bolt, with a little green leaf background, it’s a perfect lightning bolt tattoo for creative people and those who love to find art in everything around the world. Thunderous clouds and lightning can create magic! Plants, leaves and flowers bloom with the rain shower, getting bigger, brighter and flourishing after the rain has passed. Similarly, roses are known for their beauty. But for one who tries to pluck them, they surely have to deal with the thorns first. These lightning bolt tattoos with roses inside could give a message, to be strong, and to strike hard with your thorns of courage and bravery, whenever you come across a bad experience. These lightning tattoo designs, symbolizing strength and simplicity, can be placed on the forearm or wrist.

The god of thunder, Zeus is dangerous as well as striking and worshipped by many across the world. As most gods have their weapons and symbols of power, the lightning gods use these lightning bolts and strikes. In thick black outlines and dot work for shading, this tattoo depicts a sharp designs and hollow, white eyes. Each individual detail on the face and the hair and clothing is well-designed. The character is depicted here inside the outline of a lightning bolt. The person shown in the tattoo could be interpreted as Zeus, the god of thunder and lightning. This tattoo is perfectly placed on the forearm here, but you could get the same design on the biceps or legs, if you want a bigger tattoo. If you want to make this tattoo more stunning, you create a modern version with vibrant colours.

The most common designs seen in tattoo parlors are these triple bolt lightning bolts tattoo designs. With black gradient color, this tattoo could be done anywhere in your body, like the wrist, ankle or arm. Not only does it give you an energetic feel, but it also shows triple the power. With the sharp pointed edges, light to dark gradient shading and no outline, this tattoo has a clean, minimal look. The rule of thirds followed by these lightning bolt tattoo designs makes it a unique design. Three is a strong number, just like the triangle with three sides is the strongest structure in the world, these three bolts can give you the same strong foundation. You can show your love of various fictional characters through these lightning bolt tattoos, such as Harry Potter, Thor, Bolt (the animated Disney character) or Flash.

This tattoo depicts the lightning bolts and thunder we see in the sky during heavy rainfall. Just like the clear skies after a stormy night, people often get such tattoos to remember the dark times they have gone through and come out stronger. These lightning tattoos give them the strength to endure any future obstacles in life. This tattoo is free-drawn in black and electric red shades with a minimal line design.

If you want a tattoo that encourages you to seize the day, this minimal, powerful design is the way to go. Tattooed around the chest and torso in this tattoo, you can place your tattoo in the same region and feel the strength close to your heart!

If you want get a modern artistic lightning tattoo, you will love the elements in this one! One of the most famous symbols that have gained a lot of attention in the past, is the triangular eye symbol often related to the Illuminati and illumination. Well, this lightning tattoo is a creative twist of the symbol, with clouds and an eye and the lightning bolts coming from the clouds. Also, the water brought out by the rains is black droplets in this unique tattoo design. This colorful tattoo is a done in fine bodywork. The dark grey clouds with striking yellow bolts and the light blue-green eye on the cloud are all artistic. The black drops coming from the clouds as rain could also be interpreted as eye drops or tears. You can place this tattoo on the leg, as shown here, or get a smaller design with fewer elements on your arms!