101 Best Catholic Tattoo Ideas That Will Blow Your Mind! 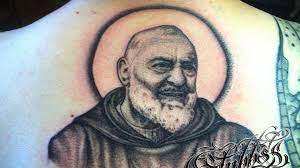 Catholic tattoo has already made an appearance since the 16th century and some of those designs can be seen in today’s generation.

Catholic tattoo designs contain the known elements of Christianity such as Jesus, God, cross, heart, rosary beads and Virgin Mary. No matter what element you choose to have in your tattoo, it will always be very distinctive.

These catholic ideas made from one or multiple symbols will strongly show the art of Christianity. People will easily be able to tell that it is a religious tattoo as soon as they lay their eye on them. Catholic tattoo in general symbolizes faith and love of God towards his followers. Many tattoo enthusiasts and people who are getting a tattoo for the first time are attracted to Catholic design due to its visuals and elegance. This shows that people, whether they believe in Christianity or not, all devour towards these tattoo designs. However, there is no doubt that people get catholic designs for the purpose of showing their love towards their religious beliefs. Now let’s take a look at each one of these designs.

Jesus Tattoos are the most popular tattoos among Catholics. They can be inked anywhere in the body and some even go as far as getting inked on full body. This is the flexibility of the most significant sign of a catholic tattoo. The realistic shades of this design on your arm will look mesmerizing especially the detailed inks of Jesus’s face art. There is a little cross that connects the heart tattoo. There are many symbols attached to the heart and Jesus tattoo. The little heart tattoo at the bottom symbolizes the eternal love of Jesus towards humans. It is one of the most prominent catholic tattoo symbols. Different meanings of Jesus christ tattoo designs can arise with different elements in a similar type of tattoo design

Joan of Arc was the Heroin of France and she was the only patron saint person who was both condemned and canonized by the catholic church. This tattoo is of st Joan of Arc inked in a beautiful way. She was the holy saint who glorify god. This tattoo is a very powerful Christian tattoo design in general due to its history. Anyone who has this tattoo is a devotee of God. Joan of Arc was also a great devotee in Catholic Church. Apart from being a catholic devotee from a religious standpoint, Joan of Arc tattoo design in the modern world also depicts fighting for justice, dedication, courage, honour, power and unity.

This is an amazing tattoo from the new testament as Jesus christ pulls out peter from the water. This tattoo design is a whole story that was set in the books of Matthew from the new testament. This is a great example of the importance of faith in the bible. As soon as Peter looks away from Jesus, he finds himself surrounded by roaring tides and winds, endangering his life, which weakens his faith. Jesus grabbed peter’s hand as you can see in this tattoo and assured him safety. This tattoo shows that having faith in Jesus and God will give you strength and provide a meaningful life. This is a great tattoo that you can have as a half sleeve and it is a great conversation starter for sure.

If you are looking for an amazing half sleeve tattoo then get a tattoo like this. This catholic design is made by a skilful artist and no words can do justice to this breathtaking design. You can see the refined details of this design that ensures that the artist knows enough about his tattooing. The religious symbol behind praying hand design is the significance of respect towards Catholics and their religion. The rosary on the other hand depicts the devotion towards the common practice of crucifixion and a catholic family. Lastly, the flower part of this catholic tattoo sleeve holds the meaning of the holy spirit. Getting a tattoo like this means a lot among many Catholics who have immense respect for religion.

This archangel tattoo consists of one of the divine workers of the lord and his name is Michael. Archangel Michael was the chief of all archangels and this catholic tattoo design is a great body art for those who respect the catholic faith. As you can see in this catholic church tattoo of archangel Michael, he was tall and a gentleman who released the fear of humans with the help of a sword. Many lives were dependent on this archangel. The crucifix beliefs can be seen in this catholic symbol tattoo as the archangel is doing the act of crucifying. The wings represent the higher status of Michael in the Archangel hierarchy.

If you are someone who wants Rosary Beads tattooed on your body then there is no doubt that you are a very religious person and a catholic. In the Bible and in the catholic religion to be specific, these types of tattoos are not used for their strings of beads nor reciting prayer using the string of beads, unlike other religions. Tattooing rosary is a symbol of devotion and mediation that goes within our bodies. Rosary Beads comes in all shapes and sizes both in the literal form and in tattoo form. This tattoo in particular has a unique style.

This is another astonishing St Michael Archangel catholic religion tattoo art. This tattoo is similar to the previous archangel tattoo but this one comes with more contrast and darker shades. You can get this tattoo anywhere on your body. If you fancy an archangel tattoo, then there are similar catholic tattoos that can be inked on the entire body. Getting a tattoo that shows the bravery and inspiration to other saints-like Joan of arc is something to be proud of whether you go to church regularly or not.

There are many significant important elements mentioned in the bible and one of them is the Virgin Mary. While God and Jesus are the greatest symbols of Christianity, Virgin Mary also holds a very high status, especially in the catholic faith. Virgin Mary tattoo is an example of something we have as an ornament, paintings and as Christian tattoos. The crying virgin mary tattoo art symbolizes a very string meaning as she was the one who gave birth to Jesus. The power of faith which needed to be seen by mankind was delivered by Jesus. People of the Catholic religion, in particular, are keener to get this catholic sleeve tattoo because of their strong beliefs in mother Mary. She was the first ministerial priest, similar to a catholic priest who is an integral part of the church.

Heart plays a very important role in Catholicism and you can find many Christian heart designs inspired by the book of the old testament as well as the new testament. The heart in this tattoo also has blood which symbolizes the blood, sweat and tears shed by Jesus to seek forgiveness for the sinners. This heart tattoo design shows the love of God towards humanity that he gave his only son. Many people get tattoos like this even though it is written in the bible that you shall not cut flesh for the dead, nor to mark any tattoo on your body. The modern world likes to see things differently and they admire tattoo designs.

The tales of the Virgin Mary in the old testament go down several generations and go into the new testament as well. The significance of Virgin Mary is the most prominent amongst catholic people who appreciate and devour the sacrifice of the mother of Jesus during the birth of the son of God. This tattoo is a simple design that anyone can get without it hitting hard on your pocket. The light ink that is used in the making of this tattoo will not cost a lot and you can get tattoos like these to show appreciation towards virgin mary just like a true catholic.

Are tattoos a sin? Can people with tattoos go to heaven? No matter how many arguments and controversies are raised claiming that tattoos are a sin or people can go to heaven if they have tattoos, you can still get tattoos. Tattoos look super cool but there is no denying that when you go to church people will look at you differently. It is not a big deal for many and it should not bother you. The tattoo designs mentioned above are worn proudly by one or more people in this world whether they believe in Christianity or not. Tattoo is for those people who appreciate art and if you fall in the category of those people and you are also a catholic then you should definitely get one of the tattoos mentioned in this article by a professional artist.

here are some more suggestions that might interest you

What is a Catholic tattoo?

A Catholic tattoo typically includes symbols or images that are associated with the Catholic faith, such as a crucifix, rosary beads, an image of Mary or Jesus Christ, or other religious imagery. The tattoos can be used to express devotion to Catholicism and spirituality, while also serving as a reminder of one’s beliefs and values. Additionally, these tattoos can be used to express grief, love, or remembrance for a lost loved one. Catholic tattoos are an incredibly personal and meaningful way of expressing faith.

What are the benefits of having a Catholic tattoo?

What is the meaning of a Catholic tattoo?

The meaning of a Catholic tattoo can vary depending on the person and their individual beliefs. Generally, however, many tattoos have deep spiritual meanings that represent faith in God, devotion to Jesus Christ, or respect for their ancestors who practiced Catholicism. Additionally, some may opt for a tattoo with a more personal meaning; for example, getting an image of Mary to represent a lost loved one. Whatever the individual’s meaning is, having a Catholic tattoo can be a powerful and meaningful way for an individual to express their spiritual beliefs.

What are some popular Catholic tattoo designs?

Some popular Catholic tattoo designs include a crucifix, rosary beads, the Mary or Jesus Christ’s name, or an image of Mary. Other designs may feature angels, saints, doves, or other holy symbols associated with Christianity. The tattoos can often be quite detailed and intricate in order to achieve the desired effect. Ultimately, the design is up to the individual and should reflect their personal meaning.

Can I get a Catholic tattoo if I am not Catholic?

Yes, absolutely! While the tattoo is intended to express faith in Catholicism and typically features religious symbols associated with Christianity, it is ultimately up to the individual. It can be used as a physical reminder of respect for ancestors who practiced Catholicism or simply as an expression of one’s personal feelings and beliefs. Therefore, anyone can opt to get a Catholic tattoo regardless of their religious beliefs.