10 Best Attack On Titan Tattoo Ideas You’ll Have To See To Believe! 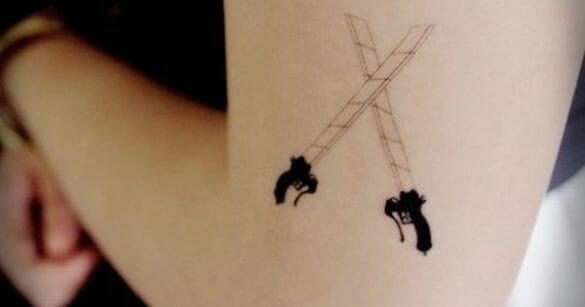 Thinking about what to get for your next tattoo? Well, if you are an anime fan, check out this list of cool Attack on Titan tattoos that we are obsessed with!

When it comes to anime, Attack on Titan or Shingeki no Kyojin is one of those that has made its mark on the world by giving a new spin on fantasy and action.

From elaborate world-building to in-depth character development, this series has it all. So, it is no wonder that people are going crazy over it.

The overwhelming journey of Eren Jaeger and his friends Mikasa Ackerman, Armin Arlert, and the others make us relate to them on a deep level. They all teach us how to face adversity bravely and not just survive but live and make the best of what life throws at us. The intense bonds of love, friendship Shingeki no Kyojin delivers it all. These are the major reasons why there has been an immense craze of getting Attack on Titan tattoos to celebrate not only the series but also the characters people relate to on a personal level. Well, to feed into the frenzy we have compiled this list of phenomenal Attack on Titan or Shingeki no Kyojin tattoos that you have to see to believe.

Here we have for you this intricately designed tattoo of Captain Levi Ackerman. He is a character we all have fallen for. This tattoo not only shows your eye for detail but also your assertive and calm nature in the face of danger. This is practical yet beautiful, showing your innate ability to combine style with comfort. If you relate to these things, then this tattoo just might be for you.

The first time we see the Armored Titan appear on the show is in the first episode when it breaks down the wall of Shiganshina District to invade the town. This is why this design represents an immense strength of character and the will and ability to batter down anything that stands in your way of achieving your goal. So, if you are someone possessing these traits, then congrats you have found your perfect match here!

The Attack On Titan Wings Of Freedom Tattoo

The logo of the Recon corps has always been termed as the wings of freedom from the perspective of Eren. Combine that with this powerful silhouette figure of Commander Hange Zoë, and you have a tattoo that signifies freedom and a carefree yet cautious personality. It shows that you can take on any job and make it flourish like no one else. If you think that these things speak to you on a personal level then swoop in and make this Wings of freedom Attack on Titan tattoo sleeve yours.

Mikasa is a character we all admire and want to be like. She is immensely strong and does not stand for anyone’s idiotic ways. Killing almost 16 Titans, she is the only one after captain Levi to have the most Titan kill count. She takes charge of situations and does not only say great things but also backs them up with actions. This gorgeous Mikasa tattoo can be a cute tattoo to wear.

We can never forget the scene when we think Levi is going to die, being surrounded by numerous Titans. Then, surprising everyone he emerges from the depths like a demon with blood covering his entire body and slaughters all the Titans, and saves himself. This tattoo signifies the strength to fight for yourself, to fight with your inner demons and outer ones and to win like a god. Being a larger tattoo, this Ackerman tattoo of Attack on Titan can be great on your chest or back.

The Fierce Titan Of The Wall Tattoos

We see the Colossal Titan appear right along with the Armored Titan and help break the wall guarding Shiganshina and leading an army of Titans. So, if you are someone who has an immense presence that is completely impossible to ignore and the ability to lead everyone, then this Titan of the Wall Attack on Titan tattoo arm design can be a great choice for you. The best thing about these tattoos is that you can throw in any other designs you feel related to.

This tattoo depicts one of the most beautiful and meaningful scenes between Ymir and Historia in the entire action-packed anime. It shows a bond beyond love and friendship. So, if you have someone who makes your life better, who helps you to live and cherish every day a little bit more, then this Attack on Titan Ymir tattoo is your perfect match. You can even get matching tattoos with your favourite person with this AoT tattoo. Amazing, right?

Next, we have is Zeke, the host for Beast Titan and the brother of Eren in this depiction of another powerfully action-packed scene from the anime Shingeki no Kyojin. He made the show ten times better just by appearing on screen. An enigmatic personality, Zeke Jaeger X Beast Titan tattoo can bring on mystery upon you.

Next in our Attack on Titan tattoos chart, we have one of the best duos of the entire Shingeki no Kyojin anime along with Eren and Armin. That is of Commander Erwin Smith and Captain Levi Ackerman. This tattoo speaks of a friendship that is irreplaceable and defies time as well as life and death. This can be a great tattoo to get inked together with your anime-loving best friend.

The Attack on Titan tattoo designs we can not get enough of is of course of the Attack Titan or Founding Titan X Eren. The artist designed these tattoos so phenomenally, that they are amazingly up to par with the art style of the Shingeki no Kyojin anime series itself. This tattoo shows that even if life threw lemons at you, you can use them to your advantage without shying away from them. This Attack on Titan tattoo portrays resilience and an ability to fight back against any obstacles.

Another Attack Titan X Eren Attack on Titan tattoo we are in awe of. The artist has perfectly portrayed here the inner strength to control your impulses and observe and take action with a level-headedness that this design speaks of. This design shows determination and has a great amount of details to keep you hooked.

Tattoos are not only cool to look at but they also speak of your personality, taste, and sense of style. If you are still confused, here are some more suggestions you might like:

• The Armored Titan and Attack Titan in battle

So, find your best match and happy inking!