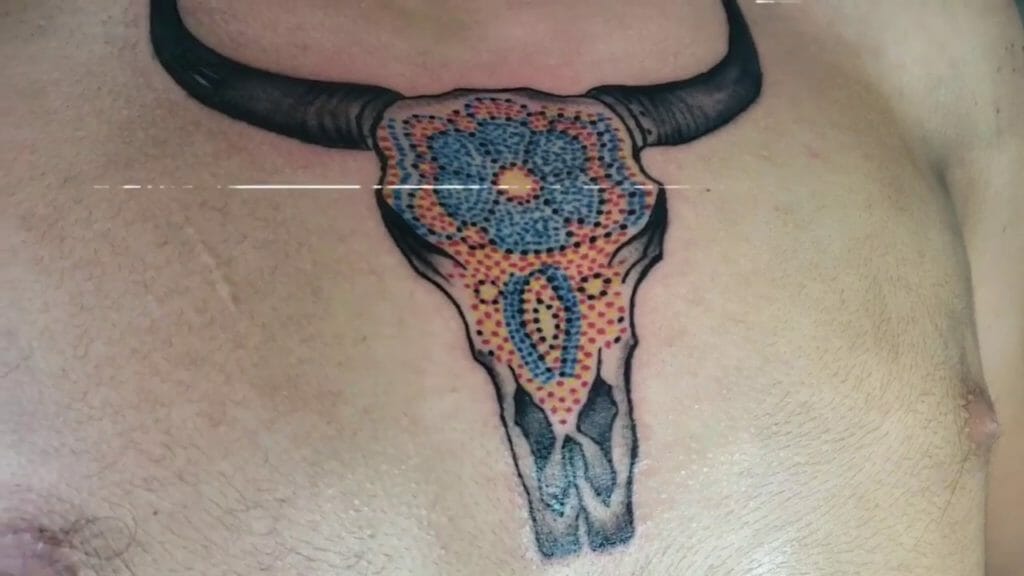 Bull skull tattoos are not one of the most common tattoos.

These are mainly famous among men and women around Texas and the western parts of the United States. They hold a significant meaning to the Native Americans.

When it comes to the question what does a bull skull tattoo mean, the answer is many. They symbolize courage, strength, death, protection, and leadership. Getting tattoos of bull skulls or skulls, in general, is not bad. They have both negative and positive meanings. Added elements of a flower or an animal make these meanings more prominent. Such as, a skull butterfly tattoo means the circle of life. Go through the list below and choose a cool bull skull tattoo for yourself free of stress.

Minimalistic tattoos are just the outlines of the basic tattoo designs people want. These tattoos are simple designs and at times, these plain designs can be the best. People who don’t want ink that covers a large part of their bodies can go for these tattoos with a free and open mind.

Traditional old school tattoos for men and women are still as popular as any trendy tattoos of 2020-2021. Many people still adorn only traditional tattoos all over their bodies. These American traditional tattoos can usually be seen having bold colours such as blue, red, black, white, and bold lines.

There are many American traditional bull skull tattoos that tattoo artists have already available to them. One such example is the picture above. You can choose other designs whichever you love as well.

Tribal tattoo designs usually belong to specific people of cultures. It bears the heritage of the culture, and it’s people. It tells their story, so even though everyone can have these tattoos, it becomes a little disrespectful if you don’t understand the significance of the tribal tattoo you’re opting for.

All tribal tattoo ideas have a distinct style that is made up of geometric designs and you can get a tribal bull skull tattoo of your own design mimicking that tattoo such as the picture above.

Chest tattoos for men and women usually hold many meanings in addition to the symbolism the specific tattoo on the wearer’s chest holds. Chest tattoos represent facing forward, strength, and power. But most importantly it means the tattoo of the element you’re getting is close to your heart.

You can choose any design or size for your chest tattoo. It can be large yet simple similar to the picture above. It can be detailed, small, yet realistic with added elements of your choice too.

Symbolism of feathers depend upon the bird whose feathers you’re choosing. However, in general, there are a few common meanings that bull skull tattoos and feather tattoos share, such as, courage, strength, and power. That’s why many people choose to tattoo these two elements together.

You can add flowers on the head like the picture above or just beside the tattoo. Choose your favorite flower, find your inspiration and come up with your own bull skull flowers tattoo.

Tattoos of dreamcatchers and of a bull skull represent many of the same things. Both these tattoos are known to be symbols of protection, and Native American life and heritage. That’s why tattoos of bull skull and dreamcatchers can be a very common thing to see.

The picture above is of a very simple dreamcatcher tattoo with a bull skull design. You can get complex ones by including more elements to them and make them more beautiful.

You can add flowers and other elements that represent your culture similar to the picture above. Find your inspiration and get your unique tattoo of the Indian bull skull.

You can get a detailed realistic tattoo of cow skulls as shown in the picture above. You can go for cartoon-like or minimalistic ones as well. Choose your favorite design and ink it.

As the name suggests, these tattoos and bull skull tattoos differ in the size of their horns. Horns on their own represent happiness, purity, and beauty. Many people choose to express these through their tattoos of longhorn skulls.

You can add elements of flowers to your tattoos of longhorn skulls as shown in the picture above. You can go for simple ones as well or add more elements to them.

You now know the bull skull tattoo meaning and what tattoo would be the best for you. Bull skull tattoos are unique for the beautiful white shading of the skull and many people do get colourful bull skull tattoos, but the ones in black ink are more famous. Get your favorite tattoo art of bull skull inked with a stress free mind.