101 Best Bull Tattoo Ideas You’ll Have To See To Believe! 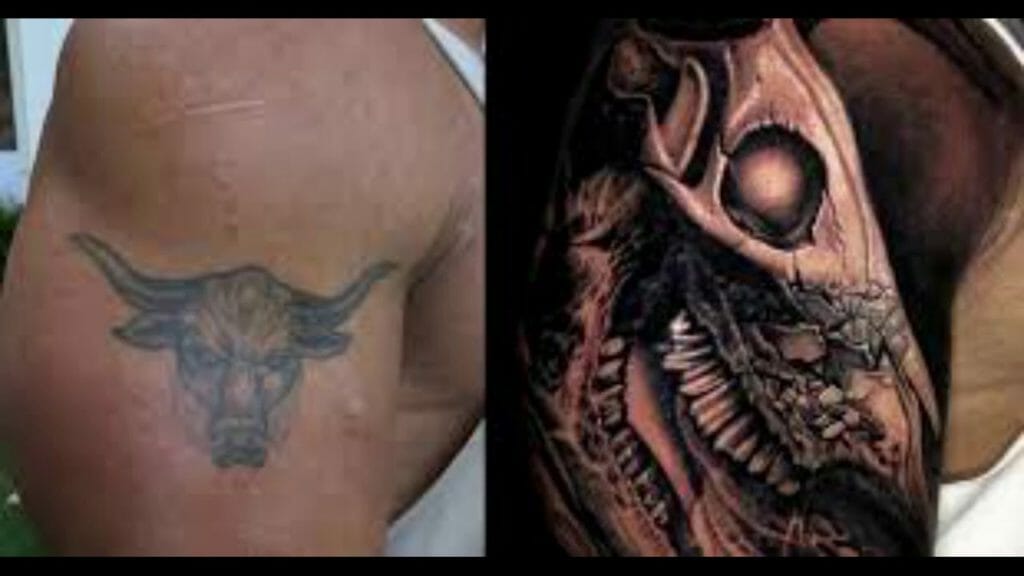 An adult male cattle is called a bull and they are a symbol of aggression and rage.

The bull is often seen as a massive beast that should not be trifled with due to its aggressive nature. Bulls have held a special place in human culture since before recorded history.

Bulls have played a major part in human life and culture as there are many archaeological discoveries dating back to 17,000 years that have bull inscriptions on cave paintings. The bull is also mentioned in the Sumerian Epic of Gilgamesh, which is regarded as the earliest surviving notable literature piece. Bulls have also been used in the Zodiac sign as they are used to represent the Taurus sign. In Hindu mythology, Nandi, the bull, is worshipped due to the bull being the vehicle of the Hindu God Shiva. In addition to the appearance of bulls in mythology and ancient cultures, they are quite popular as mascots across the world.

Bulls are of use to humans even now as we use these animals to procreate with cows to use them for meat, dairy, and other parts of the industry. Bulls play a strange role in human civilization as they are worshipped in some, and treated harshly in others, for example, the sport of bull riding and bull-baiting. Thankfully, some of these sports mistreating these animals have been banned.

Besides their importance to humans, the bull symbolism is used to represent many aspects of life, such as stamina, resilience, physical or self-prowess, energy, death, stability, strength, power, sexual competency, courage, and protection. So, in many ways, this beast is used as a sign for many things which has made them popular enough to be associated with art, ancient cultures, personality, and a strong sense of resilience. Owing to all these meanings, the bull tattoo has become a popular way for people to show their prowess.

The design of this tattoo is strong in its abstract expression. The thick blank ink makes it stand out even with the minimalistic design. The design is great to look at because of the immaculate flow of the tattoo.

You don’t have to search a whole lot for the best placement for this tattoo on your body as the small-medium size of this tattoo makes it perfect for the arm, chest, or back.

Bulls are large and fierce and a raging bull is even more so! If you want to show off your strength, stamina, and angry nature, then this raging bull tattoo design is the best for you. In cultures among many parts of the world, bulls are often instigated into agitation to attack people or become angry. The notoriously popular sport of bullfighting is mostly connected to the raging bull concept as the animal is forced into taking a stand against a Matador who tries to immobilize, kill or subdue the bull.

This amazing tattoo portrays a bull in mid-jump or “raging” as it is more commonly known. The swords on the back of the angry bull are used as an interpretation to show how a person can endure wear and tear and still come out strong.

Owing to the large size of this tattoo, the best placement for it can be the chest or back.

Bull Skull Tattoo Design For The Cowboys And Cowgirls

This simple and minimal bull-head or bull skull tattoo design is one of the many amazing tattoos that use the animal as a mark that is best associated with previously mentioned meanings that include courage, strength, toughness, power, and death.

Bull tattoos like this one are popular among people in the Western part of the United States and Texas. Native Americans, since ancient times, have used the bull skull symbol in their art and culture as something that provides life-long protection from natural elements of the world.

The design of this tattoo is simple as all the focus of it is on the skull which is sketched nicely by the artist and has a nice black ink tone to it which helps it look simple yet stunning.

In case you want a tattoo and are a bit on the self-conscious side and don’t want prying eyes, then this is the best bull skull tattoo for you as it is small and easy to hide!

Bulls are known as the mark for the Taurus zodiac sign as the word Taurus in Latin stands for the word Bull. The zodiac sign uses the mythological bull Taurus as an astrological sign. There are many different versions of the Taurus tattoo designs and in most cases, the symbol represents the traits of the people under this zodiac. Some of the traits that it represents are stubbornness, possessiveness, laziness, materialism, and frugalness.

The artist has done an amazing job here both with the design and the ink work. The bullhead is a massive part of the tattoo and the ink has been spread through the work intricately with great detailed work. You can easily see the Taurus constellation symbol on the face of the bull as it is drawn neatly. The artist has kept the background of the tattoo neat and simple so as to not take the focus away from the bull and the constellation, making them both easy to see.

A design like this due to its large size can only be inked on a handful of parts of the body that include the chest, back, or thighs.

Not many sports teams in the world use the animal as a logo or mascot. But in the case of the popular basketball franchise, the Chicago Bulls stand out as one of the most popular franchises which a bull represents. Fans of the team will easily recognize this tattoo due to the fame garnered by the Chicago Bulls in the ’90s when they were the stars of the show with none other than the legendary Michael Jordan representing them.

The tattoo draws inspiration from the look of the franchise’s logo and adds a hint of steampunk element to it with the half robot-half natural bull face. The horns of the animal are used cleverly in the design as the horns contain the city skyline which represents an effort to show that the franchise keeps the city unified in nature. It can also be interpreted to represent the toughness and grit of the bull.

The best placement for bull tattoo designs like this is on the arm, shoulder, or legs.

This tattoo is one of the many bull tattoo designs that combine the tattoo of the animal with the popular art nouveau style. The bull, as usual, is the centre of the tattoo and is drawn in a neat and clean way, with just outlines and no colour. This outline design helps the tattoo look nice and clean. The flower behind the bull design makes it look like the flower is the frame of the tattoo. Bull tattoo designs like this just ooze an aura of peace and tranquillity so if you are someone who wants to invest their stock in a tattoo that will portray their calm and collected nature then this tattoo will look the best on you.

This beautiful tattoo can also be used to interpret hope and serenity. Because of the small-medium size of this tattoo, the placement for this is perfect for the arms, shoulders, or legs.

If you are looking for bull tattoo designs that resonate with your appreciation of art, then bull tattoos like these will fit you perfectly! This tattoo is pleasing to the eyes thanks to the elements that are mixed with the portrait of the tattoo. According to the artist, this tattoo takes inspiration from the world-renowned painter Pablo Piccaso as it is clearly visible thanks to the abstract shapes and sizes surrounding the uncoloured bull portrait are filled with colours intricately. Even with all the colourful shapes, the bull portrait stands out due to it being colourless and being sketched in a minimalistic way.

This absolutely amazing full-sized bull tattoo idea just oozes with strength and power! The artwork done by the artist is stunning to see as it covers the entire back of the body. Bull tattoos like this are perfect for the male or female who are not afraid to flaunt what they have.

In many cultures, bull tattoos like this are often donned by people who know they have the power or strength to back the tattoo up. The design is spread throughout the entire surface via large curves, shapes, and patterns.

Not many can hope to pull off bull tattoo designs similar to this, so if you do decide to get this tattoo inked on your body, make sure you flaunt it!

There are a lot of bull tattoos that represent the Taurus zodiac constellation. This stunning tattoo is one of the various zodiac bull tattoos that capture the essence of the constellation. The bull is inked to perfection with great detail and design design with perfect black beady eyes. The vines and flowers add to the beauty of the tattoo and give the tattoo a mystical feel.

The beauty of this bull tattoo helps it compliment other existing tattoos than you might have on your body and if you don’t have tattoos already, then this will absolutely shine for you!

Stunning Minotaur Tattoo For The People Who Like Mythology

We saved the best for the last! Remarkable tattoos like this are tough to recreate so you will need the best professional artist that you can find. This tattoo pays homage to the Minotaur or Minotauros, a monster of Crete with the body of a man and the head of a bull.

The Minotaur was created as the representation of man’s arrogance towards god. The beast is a symbol of strength, power, death, and torture. Minotaur tattoos are one of the many bull tattoos that are absolutely badass to the core and look amazing on men and women alike.

This tattoo design has a badass look to it with the fierce design behind the portrait that perfectly captures the essence behind the lore of the Minotaur. The beast-like figure gives the tattoo a great blend between ferocity and mythology. So if you are a fan of mythology, then this tattoo will be great for you.

With all that said, here are some other bull tattoo suggestions.

Still looking for inspiration, then checkout this blog post about bull tattoo ideas.