10 Best Buddha Tattoo Ideas You’ll Have To See To Believe! 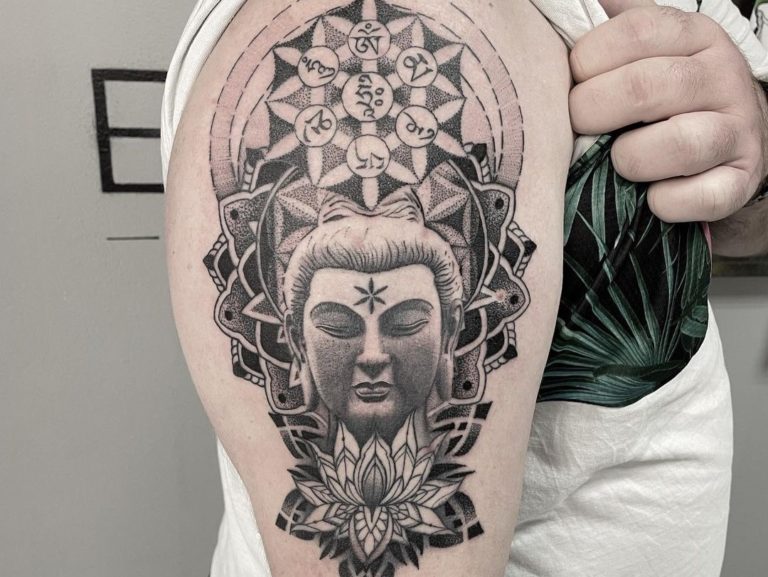 Buddhism is not just a religion but a way of life. Listed below are the best buddha tattoo designs that will amaze you, if you are a fan of Buddhist philosophy.

The Buddhist way of living one’s life is believed to be the one that brings the most peace to one’s mind.

Despite being the world’s fourth-largest religion, Buddhism is considered as just a religion and looked at as a spiritual way of living life, where one can attain a clear view of life’s reality and purpose. In a busy world like today, many people seem to find inspiration in Buddhism, popularising it amongst the non-Buddhists community.

Buddha is a symbol of peace and wisdom; different cultures and people portray Buddha differently. In some, he can be seen standing, laughing, smiling or in a very calm position.

The different portrayals of Buddha reflect the different human emotions. Tattoos are another way to express yourself. A person can show their personality with the choice of tattoo in their body. Contrary to popular belief, having a tattoo in the Buddhist community is not prohibited; instead, some Buddhist institutions encourage having a buddha tattoo or any design with symbolism. This article will elaborate on the symbolism behind buddha tattoos, buddha tattoo designs, symbolism of lotus flower, lotus tattoo, and the infamous laughing Buddha in Buddhism.

Buddhism and inspiration drawn from Buddha’s teachings are bound inside Buddhism; hence it is not necessary that only Buddhists can choose Buddha Tattoo designs.

Lotus tattoos have been considered as a symbolism of peace. Here, this small black and white lotus tattoo, ideal for both men and women, depicts Buddhist Totems. It portrays a lotus flower with the head of Buddha in the centre. The Buddha painted here looks extremely calm, and the lotus here is the reflection of purity and wisdom of a human soul. For a tattoo enthusiast who also believes in the teachings of Buddha, this symbolism of Buddha lotus tattoo or simply a lotus flower can be an inspirational one.

Buddha has long been used to symbolise the calm nature of humanity. According to the teachings of Buddha, wisdom can help a person attain ultimate peace and calm. The tattooist here has beautifully used this philosophy in this piece of art.

The closed eyes of Buddha demonstrates how closing your eyes doesn’t mean avoiding or ignoring the reality of this world. Instead, it symbolises how by only keeping your calm and closing your eyes, you can truly understand the reality of the world. It lets you focus on things that really matter; it acts as a blanket for you against all the distractions of this world. This Buddha head tattoo design is ideal for the meditative ones searching for peace.

Japanese Buddha Tattoo designs vary from other Tibetan or Indian designs. A traditional Buddha Tattoo uses more complex and detailed sketches of Buddha and adds more elements to it. They even combine different tattoos and designs like a flower tattoo, a lotus tattoo, a Buddha face to create the buddha tattoo. Together, they can form an eccentric design that symbolizes something much more than other tattoo ideas.

Among all the other Buddha tattoo ideas, this design might be one of the most eccentric yet beautiful and most definitely an amazing work of art. Starting from the back, the picture of the Japanese Buddha stretches all the way to the hips; this tattoo almost makes you feel like a part of Buddhist culture.

In addition to The Japanese Buddha as the centre of the picture, it also has colorful floral designs, showcasing the spirituality of a human soul, the wisdom that could be attained through Buddha’s teachings. The colorful ink used here is giving the image of Buddha a lot more impact.

This tattoo can also be used as a chest tattoo for people who have a broad chest and a well-built body. Both men and women can easily carry this and look amazing at the same time. Tattoo ideas like this are great if you search for a colorful tattoo and do not mind getting tattoos for your entire back. We are certain that you will love this back tattoo and share this Buddha back tattoo with your circle.

Laughing Buddha Tattoo For Your Arm

When looking for a Buddha tattoo design, you might venture into many simple Buddha Tattoo designs too. These designs might vary mostly from a serious Buddha face to more of the peaceful ones.

A laughing buddha is a twist and this buddha is believed to hold many cultural values in most Asian Buddhist countries. The Laughing Buddha depicts a stout, smiling or laughing bald man in robes with a largely exposed pot-belly. It is recognised as a symbol of luck, happiness, and prosperity. This image of Buddha is seen in many stores and homes as a deity of contentment and abundance. So, getting this popular buddha tattoo is a great way to portray your ideals.

Tattoo ideas like this one are a great choice for both men and women, even if you are not a Buddhist. A tattoo like this represents the small humour of your life’s journey and appreciates those silly and funny moments in your life.

A Mandala is an intricate pattern of mostly geometric shapes and fine lines creating complex floral patterns or other recognisable images. The term Mandala is depicted from a word of Sanskrit origin which translates to “circle,” That is why most Mandalas are circular, though they often include other shapes and images.

Buddha tattoo designs are recognised mostly for their hidden meaning and complex depictions, and there is no better way to depict the hidden secrets of Buddhism than a mandala tattoo. They have a history of containing sacred meanings that unlocks the sense of purity in a human soul, portraying a proper balance in life. Like other Buddhist tattoos, this also has a sense of eternity. The mandala design here contains images of lotus, and among them, Buddha is seen meditating. This portrayal motivates the humans to find peace within themselves, and if there is anything more important than life itself, it is meditation.

If inked perfectly, this design would be a perfect fit as a full sleeve tattoo, and it would remind the bearer of the more important things in life and help them attain peace and finally find solace within themselves.

Buddha Tattoos are all known for their depth of message. They are visually appealing too and calming. The ink fluidly weaves the symbols and manages to create beautiful designs and style them with magnificent patterns that can attract the human eye and engage the mind.

The concept of meditating regularly is widely popular worldwide among all religions, be it in Hinduism or Buddhism. It is believed that only through proper meditation one can receive true enlightenment. The closed eyes of Buddha in this Buddha tattoo design represents Buddha in a deep meditating state. Meditation should be done with one’s eyes closed but you can use visual aid – that is – imagine a burning candle as you meditate. But with this tattoo, you can focus on the fluid patterns that surround Buddha. These patterns have a very hypnotic effect that can help you concentrate on your thoughts and slowly let go of any negative images.

Japan has a very potent influence of Buddhism, with the maximum population of the country following the path of Buddha and devoting themselves to Buddhism. The portrayal of Buddha in Japanese style is not very different from the rest of the world, but they tend to keep their depiction rather simple. They don’t use complicated images or designs like Sanskrit.

Buddhism can’t stress enough the importance of meditating, as their lord, Gautam Buddha, attained nirvana only after meditating continuously for seven years. It has become the key element in their religion. Almost all of Buddha’s statues, images or tattoos, Buddha is found sitting in a meditative position and, through his meditation, blesses the world.

This exact idea above is inked down perfectly by the artist of this design. In tattoo designs like this one, the artist has painted the symbol for the art of meditating. Buddha here is sitting on top of a big lotus flower, with another small lotus in his hand, representing the purity of a lotus. The spiritual symbols like the swastika in his chest and the Halo of light over his head portray Buddha’s transformation from an ordinary human to a god.

Buddha tattoo designs like these, when embedded carefully in your body, this beautiful piece of art, especially in your arm, chest or forearm, would ooze out a notion of spirituality within yourself.

Among other Buddhist Tattoos, this one definitely stands out. Tattoos like these are not just simple ideas with various spiritual symbols but could also look incredibly cool. When we are in the seat of nature, it evokes a feeling of peace within all of us. Floral Buddha tattoos are a great way create a peaceful image centred around Buddha with peace being the priority.

Tattoos are art; and these realistic designs with the magnificent patterns are great for both men and women. The design runs through your entire forearm, with floral patterns maintaining the balance of wholesomeness around the image of Buddha.

Buddhism is not a religion but is based on more realistic and philosophical beliefs. It centres around Buddha though thr ever-changing face of Buddha across all continents show that the idea of Buddha also changes. It is only the idea of Buddhism – the ideals of peace and wisdom that remain strong. The central image of the tattoo is Buddha himself in a meditative state and all the ideas that he possesses seem to be emerging from him like plants. The flowers and plants are coming out from the hands of Buddha symbolizes the power of creation and conveys how enlightenment and attaining nirvana can help you create your flowery world. After all, concentrating and controlling your thoughts is half the battle won.

When we talk about Nirvana, we automatically paint a bizarre picture in our head, of being fun and happening with a very little understand of what it means. Men and Women following the path of Buddha struggle for their entire life to attain Nirvana but few have truly achieved it. True Nirvana is not something you can achieve over the course of your life through simple tasks but needs a lot of sacrifices. It is said that true Nirvana could set you free from the shackles of life and stop reincarnation. Nirvana may not be achieved easily but you can love the concept of Nirvana and get a tattoo of it.

So, designs like these give a clear picture of their symbols, depicting Nirvana. The use of the colour green provides more clarity to this concept, and the eagle symbolizes the freedom. A lot of thought is put behind these designs so that they can reflect the potential ideas of the artist as well as carry the perfect illustration of what Buddhism and Buddha stand for.

Here are some other Buddha Tattoo suggestions you might want to check out.