10 Best Drawing Buddha Tattoo Ideas That Will Blow Your Mind! 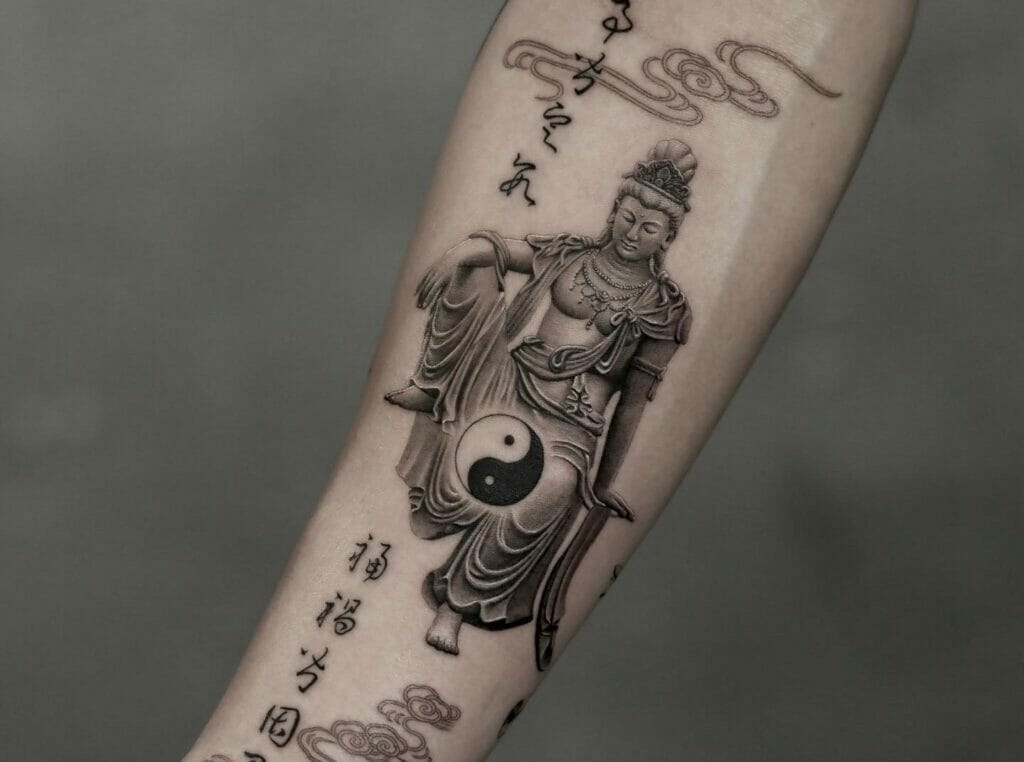 If you find inspiration within the symbols and teachings of Buddhism, then this curated list of drawing Buddha tattoo designs will definitely interest you.

Buddhism is the 4th largest religion worldwide, with about a rough estimate of 7% of the global population (around 500 million) practicing the religion.

There is a suite of 8 auspicious signs in Buddhism, known as the Ashtamangala, that most tattoo lovers go for while opting for Buddhist tattoos. However, due to cultural differences, a major section of the Buddhists consider Buddha tattoos to be blasphemous and controversial.

An Indian prince in the 5th century BCE, Siddhartha Gautama renounced his wealth and throne to live as a beggar and ascetic. He was moved by the extreme poverty and suffering of fellow human beings which influenced him in this decision. Years of traveling, poverty, and meditation led him to believe that neither abundance of wealth nor asceticism was the way of life – instead, settle for a life in between the two extremes known as the ‘Middle Way.’ Eventually, while meditating underneath a Bodhi tree (the tree of awakening), he achieved nirvana or enlightenment. He was renamed Gautam Buddha and his philosophy and teachings form the main tenets of the religion of Buddhism.

Buddhism originated in India in 563–483 B.C.E. and over the next millennia rapidly spread across Asia and the rest of the globe. Buddhism is a beautiful and inclusive religion with the followers not believing in any form of god or deity. Instead, the popular notion among the people practicing Buddhism is that certain supernatural figures appear to aid or hinder people on the way to enlightenment. Buddhists believe that only by attaining nirvana can humankind escape the otherwise entrapping and never-ending cycle of suffering. For additional information on Buddhism, popular Buddha tattoos, and the controversies surrounding them, go through this specially curated list of drawing Buddha tattoos.

The Buddha Silhouette Tattoo On Hand

The followers of Buddha view the lotus as an auspicious symbol, designating the flower with various meanings such as purity, faithfulness, and spiritual awakening. Even though the lotus flower specifically grows in murky waters, it emerges each morning fresh and pure. Buddha viewed it as a sign of purity of body, mind, and speech. The way the lotus flower emerges from the muddy waters to bloom beautifully every day is a sign of human desire on the path to spiritual enlightenment or nirvana. This beautiful Buddha tattoo makes use of the classic black and white tattoo ink colors to portray a meditating Buddha on the lotus flower, with holy symbols behind the head adding a certain sense of divinity to the whole design.

The sitting Buddha is one of the most popular and common representations of the great philosopher, symbolizing the teaching and the attempt to attain spiritual awakening. Out of the three sitting positions, this drawing buddha tattoo design portrays Virasana. It illustrates the legs crossed over each other and the sole of one foot is turned upward. One hand is raised to depict Buddha blessing the people, with the divine halo or nimbus behind his head. This stunning Buddha tattoo makes use of minimal lines and ink color to make an exquisite tattoo design overall.

While a major section of tattoo enthusiasts opt for tattoo sleeves and large tattoos, when it comes to getting inked, small tattoos have a beauty of their own. Granted tattoos covering large skin surfaces have better chances of expressing minute details. But that does not mean that small and minimal tattoos do not have intrinsic detailings of their own. This small Buddha tattoo on the hand or the upper arm is a wonderful example of how beautiful minimal tattoos can be if done perfectly. The meditating Buddha tattoo is extremely popular among tattoo enthusiasts and the use of lines and shading make this a unique Buddha tattoo drawing.

There are numerous iconographic forms of the Buddha. Along with various Buddha statues and images, the Buddha’s head has been one of the most famous iconographic representations of the Buddha and his attributes. The youthful and sweet face is round and charming with a certain calm expression on it. While these are the typical characteristics seen on a Buddha head tattoo, there is more to them than what meets the eye. The head of the Buddha is one of the most important body parts, with the finely crafted piece of art representing his vast wealth of knowledge as the spiritually awakened one. This specific Buddha head tattoo is coupled with the auspicious lotus and a clock to perhaps convey the slipping of time and how to master it with the help of the teachings of Buddha.

Getting full sleeve tattoo designs demands many hours, and finances, and is a painful experience overall. This might prove to be a little overwhelming for those getting inked for the first time. This is where minimal tattoos for beginners came into fashion. The minimal Buddha tattoos borrow the ideas from other Buddhist tattoo art but illustrate the same with bare minimal use of lines and tattoo ink. This minimal Buddha tattoo makes use of symmetry and simple black ink to depict Buddha meditating cross-legged on a lotus as the chakras seem to align around him. Go for this beautiful minimalist piece if you are afraid of the tattoo needle or are on a shoestring budget.

Nowadays, there is a whole color palette of tattoo ink for tattoo enthusiasts to choose from when they go to get inked. But the purists and conservatives still prefer the classic ink colors of black and white to get their ideas tattooed on their skins. This gorgeous and stunning meditating Buddha tattoo makes use of the classic ink colors and a masterful shading technique to create a breathtaking piece of art that is sure to draw attention if you enter the room flaunting it. The symmetrical design, the abstract concept of the art piece, and the brilliant use of shading make for a wonderful tattoo art that is second to none!

Hotei was a semi-historic monk and deity hailing from the Japanese Buddhist pantheon. He lived in the Wuyue kingdom during the 10th century and went by many names, such as Budai and Pu-Tai. He is one of the Seven Gods of Good Fortune of Japan. Considered the god of happiness and prosperity, his jolly stature, giant potbelly, and amicable laugh earned him the name of the ‘Laughing Buddha’. This Laughing Buddha tattoo uses minimal lines and strokes and almost no filling colors to portray the Japanese Buddha and is another addition to the collection of minimal Buddha tattoos. Go for this one if you have Japanese roots or want to usher in good luck and prosperity in your life.

The Japanese Buddha Tattoo On Leg

Buddhism spread across the continent of Asia rapidly from India within a millennium of its origin. Japan is one of the foremost Asian countries to practice the teachings of Buddha and a 2018 census notes that around 67% of the Japanese population (a rough estimate of 84 million people) embrace the ideas of Buddhism. This makes it the 2nd most adhered religion in japan, second only to Shinto. Hence, it is. not surprising that the Japanese tattoo community will come up with their own cultural depiction of the Buddha in the form of tattoo ideas. This incredible Japanese Buddha tattoo makes use of elegant lines and strokes and a masterful shading technique to exhibit a meditating Buddha on a lotus in adherence with the local Japanese customs and rituals.

While a majority of the Buddha tattoos on this list are of small size or are minimal tattoos, this Buddha arm sleeve tattoo is for those experienced tattoo enthusiasts who are not shy to flaunt large and intrinsic tattoo arts. The magnificent use of dark tattoo ink colors and the deft shading technique lend these Buddha sleeve tattoos a certain grandeur that will surely impress tattoo enthusiasts across all spectrums. However, go for these Buddha arm sleeve tattoos if you are only comfortable with getting inked with large body arts, taking into account the huge costs as well as the whole painful experience.

The Realistic Buddha Tattoo Design On Back

A meditating Buddha tattoo is probably the most common and widely flaunted of all Buddha tattoos out there. However, the intrinsic details, the symmetrical geometry, and the deft shading technique help this Buddha tattoo stand out from the rest. Get this one inked on your back for it requires extensive skin surface area to open up and be executed perfectly.

Buddha tattoos have been trending as roughly 7% of the global population follow the teachings of Buddha and consider themselves his disciples. Given the market trends, this fad surrounding Buddha tattoos is here to stay and will not be going out of fashion any soon. Go get your favorite tattoo designs inked but be sure to stay respectful and not try anything controversial. Happy inking!