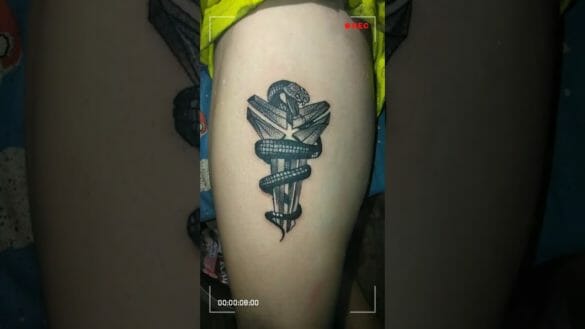 Black mamba tattoos are not that common to see.

Many people appreciate the beauty of the snake. That’s why they ask the tattoo artist for black mamba tattoos.

Black mambas possess many qualities, like speed, aggression, and agility. Black mamba tattoos represent these qualities. All snake tattoos on the other hand symbolize overcoming tough times in life, rebirth, change, and transformation. Black mambas get their name from black inside of their mouths. NBA star Kobe Bryant of the Los Angeles Lakers was first nicknamed the black mamba. After his death, people now honor him by tattooing his Lakers jersey number with black mamba tattoo designs.

Black mambas are long and the second most venomous snakes on the planet. However, they are a sight to behold. It has many qualities other than being venomous, and you can express yourself through tattoos of the majestic black mamba.

You can get a simple black mamba snake tattoo, like in the picture above, or you can add some features, such as a drawing of the jungle to it. It will look good anyway.

Realistic tattoos can be quite hard to achieve for any tattoo artist but worth the effort. Black mambas have a majestic appearance that is able to charm anyone. That beauty will get captured in your tattoo if you opt for a realistic black mamba design.

The picture above shows a realistic tattoo of a black mamba head with the beautiful features of fire around it. You can opt for the entire black mamba body for your new tattoo as well.

We’ve all heard the phrase ‘old is gold’, and that is precisely why traditional styles of tattoos are still pretty popular. Old school tattoos for men and women usually differ in techniques from modern, new, or trendy tattoos. However, we are sure black mamba old-school tattoos will help you stand out in the crowd.

You can get an old school of black mamba tattoo where the snake is wrapped around your hand like the picture above. You can opt for other American traditional snake tattoos and get a black mamba in those designs.

When we tattoo various parts of our body, some hurt less, and some more. Our hands are one of the places that can be best for tattoos in terms of showcasing the art by your tattoo artist and less amount of pain. In addition, snake tattoos look the best when inked on hands as well.

It is pretty evident from the picture above how cool the tattoo of a black mamba wrapped around your hand would look like. You can choose any kind of design and style to ink as they all will look this much cool as any new designs as well.

Snakes tattoos and skull tattoos both share many meanings. Snake tattoos represent change, rebirth, new beginnings, and transformation. Skull tattoos mean the same. That’s why on many occasions, these two tattoo designs can be seen on a tattoo wearer.

The picture above shows a coloured and somewhat cartoon-like skull and a black mamba wrapped around it. If you prefer black and grey ink more, then they will look good for this design too.

A snake around a dagger mainly refers to Mercury, the Roman God. These tattoos also symbolize overcoming many struggles of life, triumph, and bravery. When you incorporate the black mamba with the dagger design, the symbolism becomes deeper.

You can go for a tattoo of a scary-looking black mamba around a simple dagger design. You can change the design of the dagger or the black mamba according to what you like as well.

Many people include open flowers into the design of their snake tattoos. Snake tattoos have a few negative connotations. That’s why, to highlight their positive ones in greater ways, people choose to add open flowers to it.

You can add simple floral designs to a generic black mamba tattoo like the picture above. You can add various flowers or complex designs to enhance the beauty of the tattoo as well.

Meaning of any tattoo increases if there are messages written alongside them. Various kinds of snake tattoos have many meanings and it gets clear which you want to express through your tattoo if you include a message with it. The message can be for yourself, to your closed ones or for everyone.

Whether a black mamba or a vine snake, all snake tattoos represent overcoming difficulties of life and that’s the kind of message that had been shared through the tattoo in the picture above. Choose your favourite message and ink it.

Everyone knows the world renowned NBA star, Kobe Bryant, who played for the Los Angeles Lakers alongside other famous NBA stars like Anthony Davis and Lebron James. Kobe Bryant died in 2020 in an accident. Many people honor him by tattooing his Lakers jersey number ’24’ along with a black mamba as a tribute as that was his nickname.

If you love Kobe Bryant and want to honor him, you can get a beautiful black mamba tattoo wrapped around the Lakers jersey number 24 as a tribute such as the picture above. Change the design to whatever you feel will be best as his tribute.

Many people choose other forms than tattooing his jersey number as a tribute to honor Kobe Bryant. Such as, tattooing a shot of Kobe Bryant, or maybe his face with his Lakers jersey. You can also include the black mamba which was his first nickname and that can increase the meaning of the tattoo tenfold.

The picture above is of a Kobe Bryant tattoo wearing his Lakers jersey and a black mamba in the background. It’s understandable that the wearer got this tattoo as a tribute to honor Kobe Bryant. Choose your own favourite Kobe black Mamba tattoo ideas and ink your new tattoo.

Teammates of Kobe Bryant, like Anthony Davis, paid a tribute to him by shouting his name after taking a shot in a game. You can pay your tribute by getting black mamba tattoos. Any design from the list above can be the best for both men and women. Other than the suggestions from the list above, you can also include Mandala or geometric design, or get the black mamba tattoo in watercolour. Choose your favourite designs and ink your new black mamba snake tattoo soon.