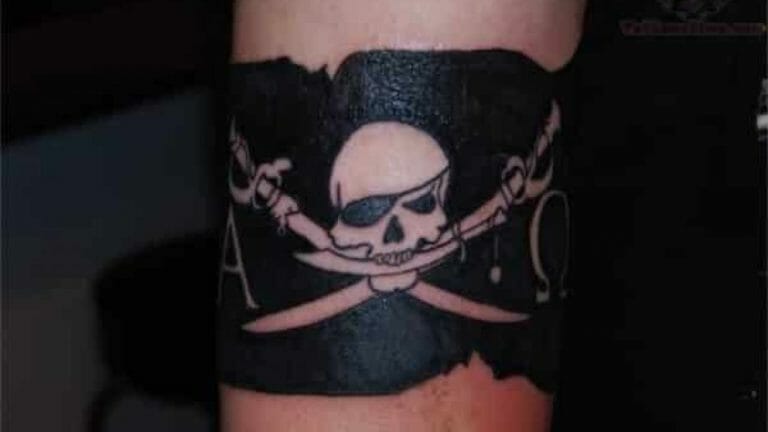 Are you an ardent follower of punk rock music? Then get ready to be mindblown with these irresistible Black Flag tattoo designs curated for all music lovers!

If you have a special taste in music then you must have heard of the revolutionary American band, Black Flag!

Did you come across a tattoo with four black bands resembling a waving flag? That’s right, it’s the famous Black Flag tattoo you’re looking for.

The band was formulated in 1976 and gained popularity across the world within no time. The infectious music, catchy lyrics, and fast-paced beats earned a huge fan base for the band. The music churned up an undying revolutionary spirit among people which actually made the band logo more emblematic. So, if you’re up for a tattoo that brings forth your bold idealisms then this is the perfect one that you’ll cherish throughout your life. Tattoos have been in vogue for many years but what makes them unique is the personal touch coupled with out-of-the-box ideas. Here are some unique Black Flag tattoo designs that can really set you apart from the rest of the crowd.

What Does The Black Flag Tattoo Mean?

The Black Flag tattoo has been interpreted innumerably. All symbolism and implications have been derived from the ideals promoted by the band. Previously known as Panic, the Black Flag band was founded by Greg Ginn. With an infusion of free jazz, heavy metal, contemporary classical, and upbeat music, the band acquired immeasurable fandom. After Henry Rollins started as the lead vocalist of the Black Flag in 1981, the band attained new horizons of success. Punk rock music brought with it a revolutions spirit that stood for anarchy and rebellion. The simplistic logo with four black bars developed by the artist Raymond Pettibon became a symbol of anti-authoritarianism. The motto was to free the mind of conformist principles. However, many admirers of the band get inked to project their unceasing love and loyalty for the band.

How Much Does A Black Flag Tattoo Cost?

A simplistic and small black flag logo tattoo on your fingers, wrist, or ankle does not punch a big hole in your pocket. The symbolic black bars of the band’s logo costs around $25 but the prices may soar up to $120 to $250 if you choose to get a black American flag tattoo or an embellished version of the band’s logo.

The cost depends on the size and intricacy of tattoo designs. Some people love to flaunt large tattoos while many like to keep it minimalistic. Customize the tattoo the way you actually like it and get ready to show it off with confidence. What’s more? You don’t even have to look around much, the best ones have already been shortlisted for you!

You can try this quirky gramophone tattoo. It’s colourful, bright, and striking in appearance – a complete package to steal the show!

If you’re a foodie then here is a unique one for you – the veggie soup tattoo! A fun and experimental way to grab eyeballs is to make it atypical yet relatable. Now, who doesn’t love food? You can get something similar to the one in the picture or you can pick your own favourite food.

The Black Flag logo holds a special meaning for hardcore punk rock fans. Henry Rollins and Greg Ginn in particular have survived the ravages of time by creating a secure place in people’s hearts. It’s not unusual for a Henry Rollins fan to get the lead singer’s face or the logo inked on the skin.

Black Flag Tattoo For Your Wrist

This tiny tattoo is the best one for your wrist. You can throw in some relatable numerals or alphabets of your choice. It can be 1981, the year when the band was formed or you can even put in your birth year.

Hands holding a pair of scissors is one of the most popular Black Flag tattoos. This tattoo adds exclusivity to character and personality. You can get a tattoo inked on the backside of your leg (like the one in the picture) or you can have one on your back.

When the two most famous genres meet, the result is just mind-boggling! The Assassins Creed tattoo combined with Black Flag is just out of the world!

Sometimes too much ornamentation makes the tattoos gaudy and over-the-top. The safest option is to keep it simple and classic, more so if you’re new to tattooing.

Do you want your tattoo to tell your story? Then get it personalized with meaningful words or catchy phrases. You can get the word ‘PARTY’ inscribed on your wrist if you are a party animal and want to show off your wacky side to people. If you want to highlight a secret aspect of your personality then this is the right opportunity to put your best foot forward.

On the other hand, you can also try out some words that are some of the representative symbols of the band like isolation, poverty, paranoia, or nervous breakdown.

Still confused? The best option is to go vintage. Old school tattoos are never too old to go out of fashion. Vintage tattoos are lively and possess a charm of their own. Add a dash of vibrant colours if you like or go black and bold. Old embracing the new is exactly what punk rock upholds.

Now that you’re hyped about getting inked, you should not settle for anything less attractive. Here are some more options that you might find useful for the tattoos that are going to stay with you for the next fruitful years of your life.