101 Best Bee And Honeycomb Tattoo Ideas That Will Blow Your Mind! 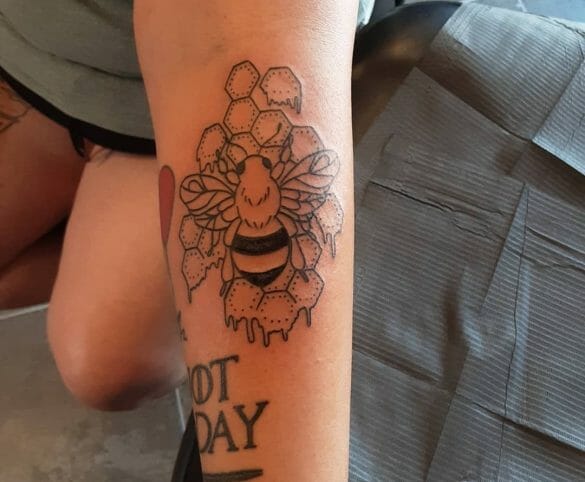 If you love insects and are fascinated by their contributions, then the bee and honeycomb tattoo is a perfect choice for getting inked on your body.

Bees who are considered to be the close relatives of ants and wasps belong to the clade of Anthophila.

Around the world, there are sixteen thousand species of bees that can be recognized where some live in colonies, while other lives a solitary life. Some of the famous species of bees include honey bees, bumblebees, mason bees, carpenter bees, and sweat bees.

The bees make honeycombs from wax which are their living colonies and also the place where they store their honey. Humans, bears, and honey badgers often take this honey for their eating purposes. The unique hexagonal geometric design of the honeycombs and the popularity of the honey bee for its importance to mankind has made it a popular choice of tattoo design among many tattoo lovers.

A simple tattoo yet the magnificent-looking design is the honeycomb tattoo with a bee. Honeycombs stand for warmth, kindness, and unity, whereas bee stands for loyalty. When these two designs are weaved together they represent loyalty and support to the community to which one belongs.

These honeycomb tattoos blossom extremely well on the forearm, thighs, wrist, shoulder, chest, and back. They are done by people to mostly show the loyalty they have towards their family members, and how hard they work exactly like bees to take care of their family. These tattoos can be either done in traditional black or colorful ink.

The concept of apiculture can be traced back to ancient Greece and Egypt. Like many other animals, bees also played an important role for different tribes in many cultures. These tattoos are often ornated with beautiful tribal elements and the bees are portrayed in the honeycomb with wings spread widely.

In ancient Egypt, bees were associated with the symbol of royalty whereas in Greece it was the sign of Potnia. The tribal bee tattoo design is done by people who believe and have a fascination for the ancients. These tattoos are mostly done using black ink and the best place to put these tattoos is on the chest, back, shin, calves, forearm, and bicep.

This honey bee tattoo design of the Queen is instantly recognizable due to the crown present on the head of the queen bee. The specialty of the queen is that it is the only female bee with fully developed reproductive organs that regulates the unity of the community and produces chemical scents that help to lay a lot of eggs.

These honeycomb and bee tattoos are extremely popular among women and are done by females who consider themselves to have leadership qualities. The tattooer with this tattoo also reflects the appreciation and support they get in their time of need just like the queen gets from its workers. Both black and yellow ink is used for getting these tattoos done and the best placement of choice for them is on the forearm, chest, back, shin, calves, and bicep.

The geometric bee tattoo design with honeycombs is one of the coolest geometric designs, which is known for its fine details. The honeycombs are created with great precision into perfect hexagonal walls from wax just like the tattooer inks a perfect geometric tattoo design on someone’s body. The ink color can be either black or yellow and totally depends on the tattooer.

Firstly these bee tattoo designs reflect the concept of loyalty and fertility. Now each geometric shape has its own meaning and reflects that when fused with the bee and the honeycomb. The circle demonstrates the endless cycle of life, the triangle is the symbol of strength, harmony, and creativity, and the square shows truthfulness. The best place to put these tattoo ideas is the back, chest, forearm, thigh, shin, and calves.

Bees are known all over the planet for their hardworking nature and have connections to spirituality since ancient times. Each and every worker bee works hard and tirelessly to create honey and provide food for the whole community. With everyone’s participation, only something great is possible.

If someone wants to reflect the concept of family, loyalty, and teamwork, this multiple bees tattoo is a great choice. The best place to put them on the body is the shin, chest, calves, thigh, and back. Traditional black ink along with other colors like yellow and orange are used for making these designs.

This bee tattoo meaning is extremely simple yet exhibits one of the most important phenomena of nature. The bee and flowers tattoo shows the symbiotic relationship these two natural objects share with each other. The insect gets its food from the flower while it helps to carry the pollen grains important for the fertilization of flowers.

People who believe in the symbiotic relationship between mankind and nature mostly get these tattoo ideas done on the forearm, chest, wrist, shoulder, back, calves, and thighs. These bee tattoos along with flowers are mostly done using colorful ink and are both popular among men and women.

These are extremely cute bee tattoos that are done by tattooers for the love they had for this beautiful insect. These tattoos can be either done using black ink or a few colors like yellow and orange can be fused with black to make them more cheerful. The best place to put this bee tattoo on the body is the forearm, chest, wrist, shin, back, and shoulder.

Cartoon characters can be taken from the Bee movie(2007) and Maya the Bee(2014) and can be done on the tattooer’s body. The tattooer can also imagine other bee cartoon characters of their own and can get them inked by the tattoo artists. Owning this tattoo is fun and is a great way to honor and respect the bees.

Though honey bee and bumblebee belong to the same species but they have stark differences in traits, appearances, and many other things just like human beings. Honeybees are smaller and thinner whereas bumblebees are fuzzy and round. While honeybees stay in thousands in hives and can be domesticated, while bumblebees live in the wild and stay in the nest.

People who like to stay aloof and function properly alone mostly get these bumblebee tattoo designs on their skin. Honeybees can sting only once before their death, but bumblebees can sting several times. This also makes the tattoo a warning not to mess with a bumblebee tattoo owner. The best place to put these tattoos is on the chest, forearm, shin, calves, and back.

In many indigenous cultures, bees were associated with regeneration, continuance, and community. Keeping this idea in mind many tattooers gets the bee and honeycomb tattoo inked on their body following the technique of realism. Realism as an art movement emerged in mid-nineteenth century France and became extremely popular throughout the world.

The realistic bee and honeycomb design are extremely cool and many people would fail to differentiate them from photographs. The best place to put these tattoos is on the back, chest, forearm, shin, and thighs. Colorful ink is often used to make these tattoos while they can also be done using the traditional black.

In the bee hives, it is only the queen bee with matured reproductive organs that are able to procreate and is considered the mother of all bees in a particular hive. Similarly, it is only a woman who is able to procreate in the animal kingdom. These bee and honeycomb tattoos are particularly popular among women and represent feminine strength.

These tattoo designs can be created by using both colorful and black ink and are mostly done on the forearm, chest, thigh, and back. Other than femininity, these bee designs also represent loyalty, honor, and fertility. Often flowers, fruits, or geometric patterns are also fused with this design to make things more interesting.

From being the main agents of pollination to providing important medicinal products for mankind, the help, it bestows on nature and mankind is indisputable. But in some places, the population of bees is coming down due to the degradation of the environment and we must take environmental preservation initiatives to stop that.

Using the honeycomb and the bee idea, many other tattoos can be created and some of them are given below.

Still looking for inspiration, then checkout this blog post about honeycomb tattoo ideas.

What does a bee and honeycomb tattoo mean?

A bee and honeycomb tattoo typically signifies hard work, diligence, organization, productivity, and industriousness. Additionally, it can also symbolize community and family as the beehive is a well-recognized symbol of collaboration among many working together for a collective goal. As honeybees produce the delicious food source of honey, this iconic tattoo can also represent sweetness, fertility, and abundance. The combination of these meanings is why many people choose to get a bee and honeycomb tattoo as a reminder to stay focused, organized, and productive in their life journey. It can also serve as a subtle nod to the importance of family and community. Ultimately, the meaning behind this tattoo can vary from person to person, and can be interpreted in whatever way is meaningful for the individual.  No matter the interpretation, bee and honeycomb tattoos always bring a bit of beauty and eloquence any design.

What is the meaning of a black bee and honeycomb tattoo?

A black bee and honeycomb tattoo typically carries the same meaning as all other bee and honeycomb tattoos; however, the color black may add additional connotations of power, mystery, strength, protection, and elegance. Black is also often seen as a representation of rebirth or new beginnings. Thus, for many people a black bee and honeycomb tattoo can symbolize the power to start anew and the strength to continue working hard and striving for their goals. Additionally, black may represent a desire to keep personal matters private, as bees with their honeycomb are often seen gathering in areas of secrecy. Ultimately, the meaning behind this tattoo can vary from person to person depending on individual interpretation.

What are some popular designs for bee and honeycomb tattoos?

Bee and honeycomb tattoos can take on a variety of designs, depending on the individual’s preferences. Some popular design choices include single bees withw detailed wings, clustered beehives filled with elaborate geometric patterns, or a solitary bee hovering around a vibrant honeycomb. They can also be designed in any color palette—from traditional black and grey to vibrant rainbows. Some people choose to add a personal touch with the addition of small details like a drop or two of honey or a bit of floral accents. Others opt for larger, more intricate designs with realistic graphic elements and striking 3D effects. Regardless of design choice, bee and honeycomb tattoos always bring beauty and detail to any body art.  No matter the design, this iconic tattoo is sure to be a conversation starter.