10 Best Bee Hive Tattoo Ideas That Will Blow Your Mind! 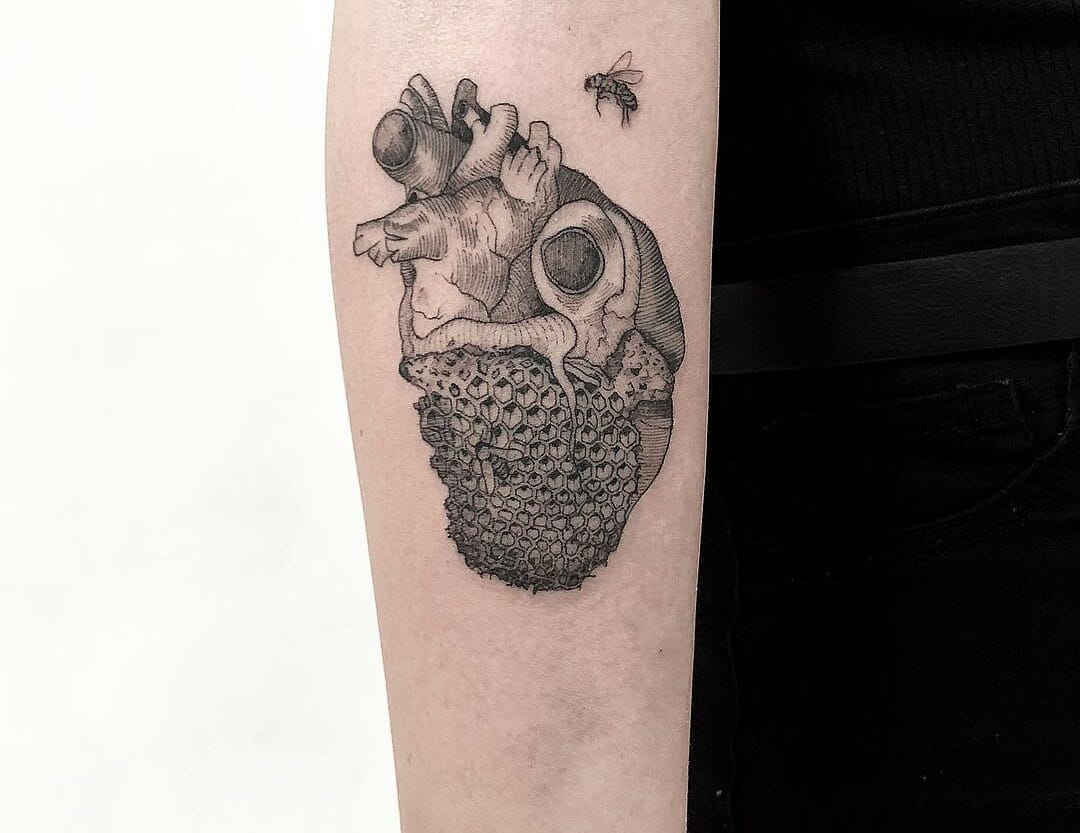 Looking for some funky Beehive Tattoo Designs? Well, find the perfect Buzz buzz tattoo right here in this curated list just for you!

Every time we hear the word “bee hive” , it reminds us of the sweetness of honey.

But at the same time, a bee is also symbolic of creativity and beauty as it curates a hive and the whole thing has an art of its own like a disitinct geometric structure. Most people are inclined towards bee tattoos as they are amazing and the meaning of bee tattoos are symbolic of loyalty and structure.

A bee tattoo is relevant as a sign of growth while on the other hand it is also a symbol of fertility and bears an importance in several myths. In many cultures, the bees represent royalty and power and has inspired many ancient religious myths. Several people thereby have preferences for honey bee and hive tattoo designs as the inspiration stems from passion for cultural knowledge and powered belief in ancient symbolism or simply because one can love bees. Nevertheless tattoos concerning bees are a well loved tattoo design by all.

Simple black and white tattoos are always in style but when it comes to bee hives, some details like the exceptional geometric shapes should come forth in the tattoo. So a Black and white Beehive tattoo just puts a classic shade on the meanings of these tattoos.

Tattoos of Beehives should traditional come with different connections between each geometric shape but the Neo-traditional tattoo ideas can bring about a small difference in this set pattern. A bold, prominent neo-liberal tattoo works just perfectly especially as a bee hive tattoo sleeve. Not to mention, a neo liberal tattoo can outright steal the show and bring the aura of being industrious into notice.

Being aware of the hype celebrities can bring to the table, combining a fictional character and adding them with a beehive can really make it seem like the character is out to save the planet, especially by preserving bees. It is a creative idea and here Wonder Woman takes up that role. You can play with your favourite superhero. So create some fusion and ink tattoos with a bit of fandom infused in it!

The hand tattoo is always convenient to bring into notice. With the magnificent details of the tattoo and the way each strokes have come through to create this tattoo makes the upper arm bee hive tattoo beautiful. Powered by the royalty and the devoutness of the bees , one can built a beehive inside a hexagon perhaps and it is believed to give out a brilliant result.

Is there anything not interesting about a larger-than-life 3D Bee hive tattoo? A tattoo that seems like even the unnoticed parts like the ear or neck or even the skull and the leg is hovering over the skin with the right tools of making it seemingly alive is always a hit. The best idea to get a 3D tattoo on is the chest for a broader width and it controls the exaggeration of it.

Queen Bee Tattoo With A Hive

As known by the structure of the family of the bumblebees with the women powered as the ruler, a Queen Bee tattoo is the symbol of Power and leadership. You can add a hive here and make it a great example of a feminist tattoo.

In bright colors, a bee tattoo with some flowers perhaps on the wrist for the cute charm is something that is instantly a mood lifter but not only will it be a looker but also will be a relevance of the connection between nectar from the flowers and the creators of the sweetness fluttering around it.

If there is anything that has been perpetually trendy in the recent times, it is the geometric aesthetic. And taking the infamous Bee sting into the play, a grotesque bee tattoo crawling up the in front is absolutely eerie and intimidating to any person out there with a dose of math in it. Point to be noted, it is an amalgamation of both the things one can be really afraid of : geometry and a black, big bee. Now that is some powered combination of a tattoo, isn’t it?

Imagine what an amazing tattoo it would be if you can create a hive tattoo powered inside a skull? It is relevant to the meaning associated with it but with a killer dose of gothic in it. And the cherry on the top here? The honey dripping from the jaw. Absolutely wicked and might even make one question their other tattoo choices in life if they decide to go for this. Well, even if that sounds a little too dramatic , just like this tattoo, the possibilities with this one is endless.

A tattoo of a bee hive or bees in general is a reverberation of several noble beliefs and myths even during the age of city modernity and being an integral part of the nature, this tattoo can also act as an awareness tattoo alongwith the cool trends. And if a tattoo signifies creativity, loyalty, devotion to the clan, defence and wisdom and also is a signature for sexual prowess, fertility, royalty, prosperity and luxuriousness with a sting to it, bee hive tattoo designs are something none can refuse to. For more of these tattoos, here are some more options