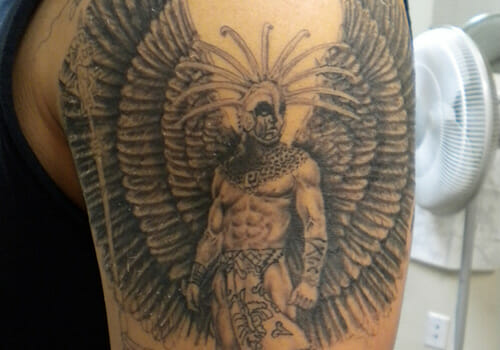 Looking for bold and striking tattoos to represent the warrior in you? Here are some amazing Aztec Warrior tattoo ideas to set you apart in a crowd.

Many people from the Central American region or those with their roots in Mexico take pride in wearing Aztec warrior tattoos.

The Aztec empire founded in the 15th century was known for its astounding development in the fields of art, architecture and science in the entire world. They also had a unique culture with their own deities who they worshipped whenever they faced any trouble.

The Aztec people were also known for their daring behaviour and the ability to face injury and death without flinching. Their warriors were expertly trained in the art of war. Thus, if you wish to get an Aztec tattoo that represents these features, then you should look at an Aztec warrior tattoo design. It is believed that the Aztecs wore tattoos on their arm, shoulder or chest. These tattoos worn by their men and women showed their traditional way of life. If you want your tattoo to be realistic and flaunt the traditional Aztec culture, then you should get an Aztec warrior tattoo.

One of the best Aztec tattoos are the Aztec tattoos with the face of a warrior with all his weapons and accessories. Although the tattoo design sounds simple, the actual Aztec tattoo is anything but simple. It will take an expert tattoo artist to sit and create a realistic warrior tattoo in a detailed manner. From drawing the feathered headdress of the ancient Aztec people accurately to the designs in their shield, this is definitely one of the most popular Aztec tattoo styles in the world which also looks realistic.

While most Aztec warrior tattoos have a bold and elaborate style, some people want even more complicated tattoos. Most of the warriors in these tattoos have a passive, courageous face while some people get tattoos where the warriors are more expressive as if they are almost in the midst of a battle. At the end of the day, tattoos are supposed to be the way we express ourselves and our emotions and sentiments so we can modify our tattoos as much as we want to.

If you want to complement your Aztec warrior tattoo design with warrior tattoos from other regions and cultures, you should check out these amazing Vegvisir tattoo ideas!

Complex Aztec Tattoo Representing The Animals And Birds Of The Culture

Animals were a huge part of the Aztec way of life and each animal represents different symbols and features in their life. From a serpent to eagles and hummingbirds, many of these animals were also believed to be symbols of various gods or elements of nature. Thus, the Aztecs worshipped these animals considering them to be a representative of an Aztec god on earth. Quetzalcoatl is one of the most well-known Aztec deities known for its ability to control wind and bring food to the people. Quetzalcoatl was also deeply feared and revered by the Aztecs.

The Aztec symbol for strength is an eagle. For the Aztec people, the majestic eagle birds represented strength, power and limitless courage. The Aztec Sun God or the Aztec God of War was also represented as an eagle bird or hummingbird in the Aztec culture. Therefore, many of the warriors wore headdresses during battles with feathers that resembled the feathers of the bird. With their headdresses and other battle weaponry, the warriors looked as ferocious as the bird swooping down to catch its prey or escape other birds. Therefore, many of the warriors often chose to have an eagle symbol inscribed on their shields or armbands in order to draw inspiration and courage from it.

If you are looking for an Aztec warrior tribal tattoo that will be historically accurate, then you can get an Aztec eagle warrior tattoo.

The Aztec warriors also respected the mighty jaguars which are found in the Central American region. If you want a slightly different style of Aztec warrior tattoo then you can draw some inspiration from the picture. The face of the fierce animal has been accentuated with the usual headdresses that the warriors used to wear. By getting an Aztec jaguar warrior tattoo, you will be recognizing the important animal of the region and also use it as a metaphor for the warrior in you.

Ideas For Aztec Tattoo That Can Be Placed Anywhere

While most people get Aztec tattoos on their arm in the bicep area, you can get a tattoo on your back or your chest as well! The best aspect of Aztec tattoos is that they are quite elaborately designed but they can be made to fit in any place you want on your body. According to some historical studies, the tribal Aztecs even had tattoos on their faces. So you can add your modern Aztec tattoo design wherever you want to on your body including your chest, calves, shoulder neck or back. An Aztec warrior tattoo sleeve on your arm would also look very captivating.

Ideas To Add Colours To Your Tattoo

While the most popular tattoos are mostly monochromatic and black with various degrees of shading, a modern style is emerging whereby people also add colours to their tattoo to make it more lively and attractive. As seen in the picture, adding a vibrant and vivid red colour to the tattoo instantly makes it even more gorgeous and captivating.

As proven by Aztec art and architecture, the Aztec culture was extremely sophisticated and developed. They expertly designed their cities and built beautiful temples and homes for their rulers. They also led very colourful lives and their ruler often wore feather headdresses which were red, blue, yellow and green in colour. If you do not want the common black-coloured tattoo, you should delve into the Aztec history to see which colour represents what features or meanings for them. Accordingly, you can get a colourful and spirited tattoo like the warrior you choose to represent through your Aztec tattoo!

According to the historical studies about Aztecs and their culture, mostly the men were warriors and went to fight battles for their people. Women were supposed to stay back and look after the home, family and other household chores.

However, there is no harm in revising history a little and modifying it if a woman wishes to! If you want to portray a fierce woman warrior instead of a man, then you just need to tell the tattoo artist about your ideas and go ahead. The reversal in genders will definitely draw eyes to your Aztec tattoo and will represent your strength and courage.

Another well-known Aztec tattoo design is to base your Aztec tattoos on the skull motif. The Aztecs often kept skulls of their victims or human sacrifices to show their prowess. So if you want a truly terrifying tattoo, you can get a skull Aztec tattoo. You can even add the skull pattern with other designs and elements such as the headdresses or Aztec architecture to make the design more realistic.

How To Add The Shading Effect To Your Aztec Tattoos

You can also enhance the beauty of your tattoo by adding more shading or sketching effect to the tattoo. Rather than drawing a simple outline tattoo of a warrior, many people choose to add on to it to create the perfect piece of art.

If you are thinking “How to shade a black and white Aztec warrior shield tattoo?”, then just have a chat with your tattoo artist where you both express your creativity! The dark and light effect in the design will enrich your tattoo design and pay true homage to the ancient Aztec culture.

The stark contrast between the dark shadow and your tattoo will further enhance the beauty of your tattoo and make the design more realistic. You can also choose to add a colour and then ask your tattoo artist to work with the colours to create a truly wonderful Aztec tattoo that will make everyone ask about the art on your body and its meanings.

The Aztec warrior tattoo meaning is quite profound and important for people who have fought in wars or have struggled a lot in life.

Most of the popular Aztec tattoo designs are of the face of the warrior and their shield. However, many of the newer tattoo designs add contemporary elements to make it look distinct from the rest. Therefore, you can choose to get a tattoo drawing of the whole body of the warrior in a striking pose. You can also add several Aztec symbols to make your warrior tribal tattoo even more nuanced.

You will notice that many Aztec tattoos often have pictures or patterns of their God of Sun or the Aztec eagle or a feathered serpent. Each of these symbols have a deep meaning behind them which can be understood by delving into their tribal history. Many of the popular warrior tattoos include the picture of the Sun God as was imagined by the tribal people. According to history, it was also considered to be auspicious to carry the tattoos of Gods on the body as it would please the god. The Aztecs were extremely religious and prayed to their gods religiously, sometimes even sacrificing a life to appease them.

According to Aztec history, Quetzalcoatl is the god of wind and the deity who gifted maize to his followers. Quetzalcoatl is represented as a feathered serpent in their art and culture.

If you are interested to get tattoos of Gods from other cultures, you can also check out these Zeus tattoo ideas!

If you are still wondering “What does the Aztec warrior tattoo mean?” then the answer is quite simple. Like most tribal warriors of the past, the Aztecs were also fierce and had a courageous spirit that allowed them to protect their home from invaders. Even though they were ultimately defeated by colonizers from Europe, these people never stopped fighting to save their own identity and culture.

A popular tattoo for many Mexican people or people with Central American roots, the Aztec warrior tattoos are a true testament to the bravery and courage of these tribal people.