10 Best Ar 15 tattoo Ideas That Will Blow Your Mind! 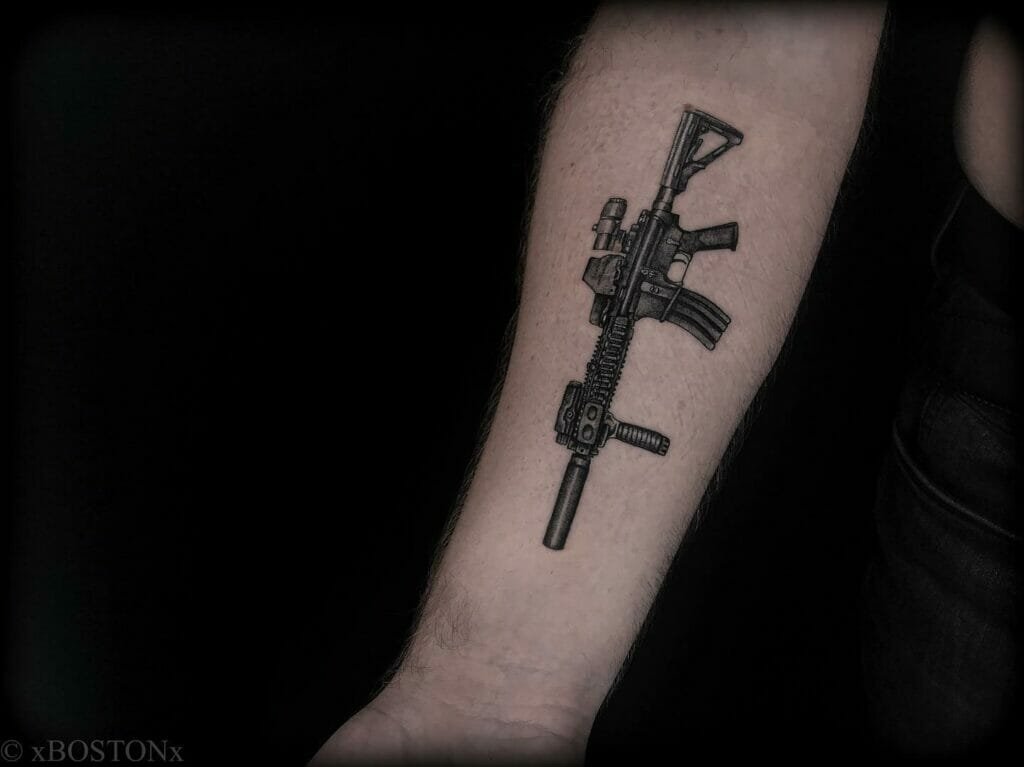 Did you have a fetish for guns since childhood? Then you should definitely check out these Ar 15 tattoo ideas for men and women who dream of living on the edge!

The idea of possessing a real gun is empowering and thrilling in itself, isn’t it?

Interestingly, both positive and negative symbolisms are attributed to weapons. On the one hand, weapons are typically considered to be the symbol of power, destruction, oppression, violence, and death, while on the other hand, they also qualify as a sign of protection, security, and justice.

Guns are widely operated by soldiers, policemen, hunters, criminals, and bounty hunters. However, with the progress of civilization, the gun plays a vital role in maintaining peace and order. Now, what makes the Ar 15 special? The Ar 15 is one of the most popular weapons among Americans even today. Before heading to the tattoo artist for a Ar 15 tattoo, you should discover America’s rifle and be aware of its accessories and attachments, including the muzzle brake, hand stop, stock, rail panels, and others.

The ‘Ar’ translates to ‘ArmaLite Rifle’. This rifle was first developed by Eugene Stoner and introduced around the 1950s for use in the war. These semiautomatic guns were designed with the purpose of inflicting maximum damage in mass shootings. Such was the functionality and destructive effect of these semiautomatic weapons that they were banned for some time. Guns like Ar 15 were capable of mutilating the human body, unlike any other weapon. Nevertheless, you can wear a revolver tattoo or gun tattoo for more than one reason, and if you don’t want to root for the stereotypical Ak47 tattoo, then here are a plethora of Ar 15 tattoo ideas that will leave you spellbound!

Have you ever imagined a cartoonish gun tattoo? Tattoos are a fun way of reflecting your personality, so it doesn’t necessarily mean that you have to adhere to certain principles to represent the true image of an object. For instance, a weapon or gun is generally perceived in a negative, destructive light owing to the violence inflicted by it, but when it comes to selecting rifle designs for your tattoo, you can opt for anything that you relate with.

This cartoonish representation of the Ar 15 is the perfect benchmark. It reflects the lighthearted side of any person. This colorful tattoo design with the famous cartoon character Taz pointing the Ar 15 upwards in a defensive posture is unique. This gun tattoo, set against the backdrop of the soaring American flag, promotes a sense of security and protection that all citizens deserve. Instead of glorifying war, this tattoo trivializes it and sends out a message of hope among people. You can even swap Taz with your favorite ‘Looney Tunes’ character to give it a personal touch.

Nothing beats creativity and imagination. The combination of food and a gun is in a class of its own. Food is the symbol of nourishment and life. In contrast, a gun symbolizes destruction, violence, and the end of life. While one saves, the other kills. Any person bearing this tattoo will be revered by all.

Using ice cream, lollipops, wafers, candies, and chocolates to design firearm tattoos might seem a crazy idea, but it’s surely going to draw a lot of attention and awe. No one can help but relish this colorful, delectable Ar 15 tattoo. On a serious note, it can be inferred that this Ar 15 tattoo vouches for peace. You can even customize and create your personal out-of-the-box tattoo design.

What image do you bear in mind when you hear someone mention Ar 15? Although the Ar 15 denotes power, it comes at the cost of vulnerability. Soldiers often sacrifice their lives or end up getting hurt while saving the skin of their countrymen. Their efforts deserve acknowledgment, and nothing can be a better tribute than Ar 15 tattoo designs like this one.

This gun tattoo carries a deep meaning. At a closer look, you can see the Ar 15 encircled by wiring. The tattoo is clearly a tribute to the soldiers who risk their lives at the borders to ensure protection from the enemy. The tattoo, colored in black, stretches across the entire forearm. The wiring around Ar 15 would stop anyone from grabbing the firearm. The beauty of this tattoo lies in the meaning that it conveys.

Elegant Ar 15 Tattoo For The Forearm

Gun tattoos are an embodiment of power and strength. However, with power comes great responsibility. This Ar 15 tattoo is perfect for guys with a muscular and toned forearm. Most Ar 15 tattoos are, in fact, inked on the forearm for the elegant look it offers.

An Ar 15 tattoo spread across your forearm implies that ultimate power lies in your hands. Accurate details of every part of the Ar 15 cover the skin. The Ar 15 is colored in black with a speck of red.

When you want to play safe, go for the contemporary tattoo design. If this is your first time getting inked and you are unsure, then it’s best to be at par with the times.

This Ar 15 tattoo strikes a balance. It is contemporary and yet uncommon. In this Ar 15 tattoo, cupid is holding the firearm. Cupid’s bow and arrow have been exchanged for a Ar 15. If you want to settle for a tattoo with a modern touch, then this is one of the best rifle designs.

You don’t always need to be loud to grab the limelight. A sleek and sensual tattoo design is enough to seal the deal. This is one of the best Ar 15 tattoo designs for women.

If you want to keep it minimalistic, you can just go for a Ar 15 tattoo outline or take clues from this Ar 15 tattoo. The focus on the necessary details makes up for the beauty of this Ar 15 tattoo colored in all black. It sits centrally aligned to the forearm.

Nowadays, people use their bodies as a mode of expression, so the more tattoos, the merrier. The best thing about possessing a miniature version of a tattoo is that it fits well on any part of your skin. You can get these tattoos on your fingers, wrist, toe, or even the side of your face. If you are enthusiastic about having more than one tattoo, then you can opt for these tiny ones. These rifle designs look super cool and save up a lot of space too!

This mini Ar 15 tattoo is just the perfect example. Unlike the others, this Ar 15 is a smaller version that accentuates the back of your palm. You can add some flowers like roses or some musical instruments like trumpets and bugles. If you want to bring out the image of death, then you can even incorporate a skull to make your Ar 15 tattoo stand out.

Classic Black And Gray Ar 15 Tattoo For The Leg

Who can forget the toy guns that added thrill and excitement back in childhood? You can surely relive those nostalgic memories and still rule the game but not with a toy gun but with Ar 15 tattoos. If you want an elaborate tattoo, then longish weapons like the Ar 15 or even an Ak47 gun fits better than a small pistol.

This Ar 15 tattoo will take you back to those good old days. The tattoo features a Ar 15 in shades of grey for the body outlined with black. The design is simplistic and perfectly runs along the length of your leg.

It is not possible for everyone to have a pistol or rifle like a Ar 15 in possession, but anyone can get gun tattoos that offer a realistic feel. A true representation of the Ar 15 would require attention to all its minute details. The more intricate the details, the more realistic the Ar 15 appears on your skin.

If you want to steer clear of all fanciful and imaginative ideas and want your tattoo to be a true representation, then you can take hints from this realistic Ar 15 tattoo. The tattoo features a typical Ar 15 with a personalized message that puts forth citizens’ right to possess firearms for protection. These Ar 15 tattoo ideas are intended to put across every citizen’s urge for safe habitation.

Snakes and guns form a deadly combination, and each carries a symbolic meaning that complements the other. Both snakes and guns evoke a sense of fear, particularly the fear of death. Just like the poison of a venomous snake, a single bullet can prove to be fatal. Since tattoos, in general, are gender-neutral, anybody can get them. Although these Ar 15 tattoo designs are popularly flaunted by guys, even girls can get them inked on their bodies to set the equation right.

This one is pretty offbeat and perfect for girls who can wear it with confidence. The bright yellow snake curled up around the firearm, showing its fangs, illustrates the image of terror accurately. However, there’s also an underlying irony. Anyone would be hesitant to reach out for the Ar 15 and wait for the snake to depart. This Ar 15 tattoo upholds the sign of peace by reminding the consequences of war.

You can also check out some of these out-of-the-box Ar 15 tattoo ideas and opt for the Ar 15 tattoo design that complements your persona!