101 Best Alpha Omega Tattoo Ideas That Will Blow Your Mind! 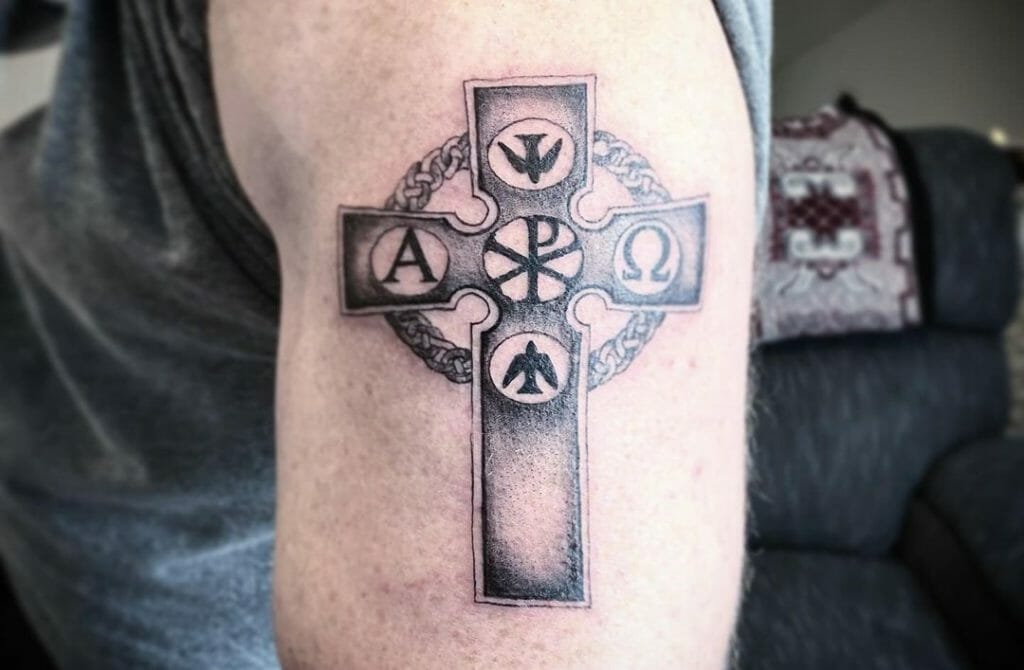 Are you interested in alpha omega tattoo designs? Check out these new and amazing tattoo ideas that you will surely fall in love with!

Alpha and omega are the first and last Greek letters, respectively, having meanings associated with philosophy and Christianity.

Alpha omega tattoos are commonly sported by men, but that does not mean women cannot get these tattoos. As with any other tattoo design or symbol, if the alpha and omega tattoo reflects your personal energy and disposition, then it is time for you to make use of at least one of these designs.

Why Is Alpha And Omega A Popular Tattoo?

You must be wondering, how did the alpha omega tattoo become so popular? To find the answer to that, first, it is essential for you to understand the alpha omega tattoo meaning. Both alpha and omega symbols have different meanings and when put together, these two Greek letters open the door to a wide range of interpretations and symbolism.

The alpha symbol is the first letter in the Greek alphabet as already mentioned, and this stands for the spiritual essence of one’s existence. On the other hand, the omega symbol, which is the last letter, stands for the physicality of one’s existence. Hence, a tattoo displaying the alpha and omega letters together bridges the gap between one’s soul and physical presence. Additionally, in the Bible, Jesus Christ refers to himself as the alpha and the omega, to signify His eternal nature, as He is the beginning and the end. Therefore, alpha omega tattoos are also popular among Christians, as it is symbolic of Christ’s completeness.

Alpha omega tattoo designs are often found to be created keeping both the alpha and omega meaning in mind. There is no reason to believe that an alpha omega tattoo cannot incorporate both the philosophical and religious essence of the symbols. Over time, different kinds of new designs have cropped up, that have kept both these symbols relevant as tattoos.

Considering all that information, it is easy to understand why alpha omega tattoos are certainly one of the best kinds of tattoos for men and women. If you want a tattoo depicting both these Greek letters, then please read through this article. You may end up falling in love with several of these designs and ideas in no time!

If you are interested in capturing true Greek essence on your skin, then this design may surely spark your interest. Here, the alpha and omega letters are placed in such a manner, that it is easy to see and separate the symbols. Surrounding the combined motif is a typical Greek pattern that further enhances the visual appeal of the tattoo. This is quite a work of art, to say the least! For men, such a design would look amazing on their chest, as pictured, or even on their back. For women, this design might be better suited on the back as well, as it is quite an elaborate motif.

A coloured floral tattoo like this one may just be what you need to add vibrance to your skin. The floral patterns are surrounding the combined alpha and omega motif which is further surrounded by a lovely golden frame. Even though this design has a lot of elements and colours, it still appears pretty neat and clean. You can certainly make changes to this design and add your own touches to make this more personal. For example, you can choose any other kind of flower that is your favorite, or other colours that match better with your vibe.

Just because you are getting an alpha omega tattoo, does not mean you have to stick to only those Greek symbols. If you want to strengthen the meaning and concept of your tattoo, then why not add the chi and rho symbols to it? You may opt for a design like this, where the tattoo starts with the rho symbol and ends with a beautifully detailed anchor, with the chi in between. On both sides, you will notice the symbols of alpha and omega, as well. Chi rho tattoos are related to Jesus and Christianity, as the X and P are the first two letters of the Greek word for Christ. Hence, when you combine all that with an anchor and the alpha and omega, which also attributes to Jesus, it could translate to mean that your beliefs are strongly anchored in the teachings of Christianity.

Alternatively, depending on your preferences, you can also choose a design like this. While the placement of the Greek letters is pretty much the same as the first one, instead of an anchor, there are two olive branches on both sides of the motif. This design is not only related to Jesus but also offers the message of peace.

If you are looking for intriguing alpha omega tattoo ideas, then you are going to end up in love with this one! In this tattoo, the freemasonry sign is the centrepiece with the alpha and omega signs on either side of it. The open eye in the freemasonry symbol is used as a reminder that God is able to see all the good work and bad work we carry out. You will also notice a few dotted lines connecting the letters alpha and omega. This is quite a clever way of connecting the two elements of spirituality and physicality in one tattoo. Altogether, this has got to be one of the best alpha omega tattoo designs available for you to use.

Alpha omega tattoos can be represented in a number of ways. This is one of them. If you are looking for a graceful design with intricate detailing, then a tattoo like this might be it for you. Here, you will be able to see that both the symbols for alpha and omega are inked using curved lines and dots, along with some solid black shading. Designs like this look very chic and are most commonly opted for by women. However, even men can choose to get inked with this.

Linework tattoos are quite popular among both men and women and often receive a great review. So, how about you incorporate some amazing linework in your alpha omega tattoo? As you can see in the picture above, both the symbols of alpha and omega have beautifully popped out against the circular lines, making the tattoo look like an optical illusion. Even with that many lines, the design is actually quite simple and clean. You are certainly going to turn a lot of heads with this one!

Minimalist tattoo ideas are well-appreciated by those who do not have the experience of getting inked before. So, if you are in search of a compact alpha omega tattoo then why not try out this design? Both the symbols are beautifully interlinked, but can still be differentiated quite easily. Not a lot of time is required to get such a minimalist tattoo, however, it is just as lovely as any of the other designs.

If you are not a fan of the interlinked design, then you can also choose a clean and simple tattoo like this, with the omega and alpha symbols next to each other. Apart from the finger, as pictured above, you can also get this done behind your ear, neck, or on your wrist.

Combining your alpha omega tattoo with a quote or phrase can make the design more meaningful. You can go for this tattoo pictured above, which illustrates the literal meaning of both the symbols. The intertwined alpha omega along with the quote flanking its two sides is definitely a work of art to fall in love with.

You might be wondering, “What colours for alpha omega tattoo are best suited?” While you can let your imagination flow and pick any colour you want to, red alpha omega tattoos seem to be quite vivid and popular. For instance, in this design, the red-coloured alpha symbol is adding a certain vibrance to the overall motif. Additionally, the symbol for omega looks like it has been carved into the skin, which is quite intriguing, to say the least. Considerable time and work are required to get such a tattoo, but it is completely worth the hassle!

If you have prior experience with getting a tattoo and looking to commit to an elaborate sleeve tattoo design incorporating the symbols for alpha and omega, then check this one out! Both the alpha and omega are quite prominently depicted with shades of red and some green streaks. The hints of purple and yellow also add a dash of vibrance to the design. Even though to get a sleeve tattoo like this, you will be required to invest a lot of time and patience, once the tattoo is completed, you will fall in love, instantly!

Now that you have the answers to questions like, “What does alpha mean?” and “What does omega mean?”, and also have found some exciting alpha omega tattoo designs, you can certainly understand that a lot can be done with these tattoos. As you know by now, there are several available design options that you can choose from, to permanently display these two meaningful symbols on your skin. Here is a compilation of some of the best alpha omega tattoos: