Armband Tattoo Meaning – Everything You Need to Know 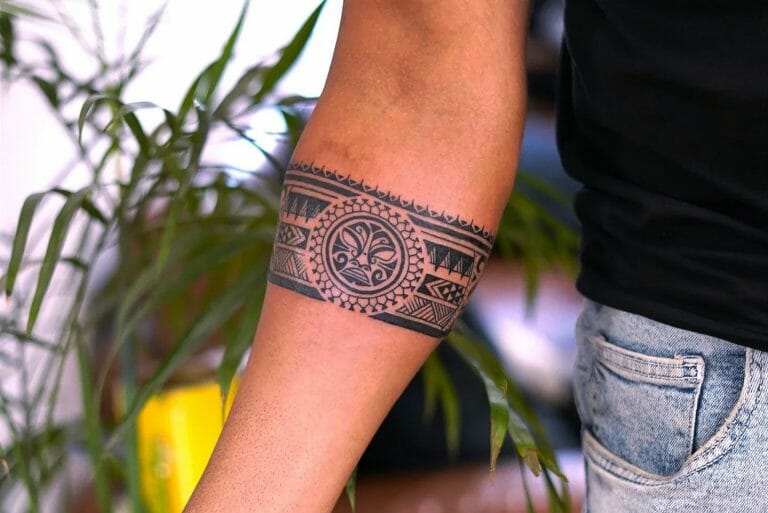 The different armband tattoo meaning has been the key element for this design to be the top seller in many countries around the world.

From Alexandra Shipp to JoJo Levesque, many such celebrities and popular people have got inked with the armband tattoo.

But what makes this tattoo so popular around the world that is the question? Well as the name suggests the tattoo encircles around the arm like a band which not only looks elegant but also is a really cool tattoo design.

They can be either done as a solid black armband tattoo or with only a few lines taking the minimalistic approach. Due to their unique tattoo form, they are also called armlet or bracelet tattoos. One who wants to express oneself can get this tattoo done as in the market different types of armband tattoos are available to pick from like the floral patterns, Polynesian, Norse, and many more. Meanings can vary from person to person, as some people get them for their aesthetic beauty and some for radiating extremely personal emotions.

The first and foremost thing that comes into our mind when we are talking about Celtic tattoos is the representation of vitality and strength. The Celtic armband tattoos have become popular among both men and women nowadays and are also known as the Celtic Knot. According to legends the warriors use to ink these tattoos on their bare bodies during warfare to terrify their opponents.

This Celtic-style armband tattoo was made by the Celts using blue ink obtained from the Woad plant but now it is mostly inked using black, red, and blue ink by the tattoo artist. They can be done in any portion of the arm and are one of the most important symbols for the Irish people and their descendants representing the Celtic Culture. The knots have become the symbol of infinity which represents the endlessness of the Universe and can also be done by any person to express an eternal bond either between two people or between nature and humans.

The solid black armband tattoos have twofold meanings. Firstly it acts as a symbol to show the loss of a loved one. The black colour also perfectly fits the concept of mourning and death and is mostly done on the wrists or sleeves. It is popular among all the genders and is mostly inked by someone who wants to honour and carry the memory of his or her loved one for the rest of their life.

Secondly, when the black armband tattoo is done on the bicep muscle, the concept it carries has completely a different armband tattoo meaning. It signifies luck and strength and is mostly inked by a male or a female who has a great muscular body.

Barbed wire tattoo is gaining popularity in recent times both among men and women and looks both engrossing and appealing. Done mostly in black ink it suits both as an armband and as a wristband tattoo. Now the meaning of this armband tattoo varies from person to person.

Mostly this tattoo represents strength, authority, and power. It can also be inked by someone to show the hardships that they have faced or are facing in their life. Many war veterans are found with this tattoo design and this demonstrates the courage, bravery, and hardships they were required to show in the battle. Religiously it also indicates the idea of the thorn crown worn by Jesus Christ.

The abstract nature and the intricately interwoven lines make the meaning of the armband tribal tattoos hard to grasp yet extremely appealing. These tribal designs are thousands of years old and have different meanings and cultural significance. The armband design is inspired by traditional symbols and tribal arts and mostly demonstrates the concept of valour, strength, and leadership qualities.

One of the most popular tribal tattoos is the Native Americans’ armband tattoo which is mostly done by men. The tribal armband is magnificent as we see beads and feathers hanging from a rope tied around the arm in the form of a tattoo. It can be done either in black ink or in multiple colours and represents the native American pride.

If the concept of symmetry appeals to you and you are a tidy person, then this is the perfect choice of tattoo for you. Though the geometrical patterns are hard to create, once done by the tattoo artist as a permanent tattoo it looks outstanding. It can be either inked in black or with several colours in multiple bands.

The geometric shapes design is considered to be quite an old tattoo design and was first found inked by the people of the Micronesian Island somewhat around 2000 years ago. They can be done on the arm, elbow, or biceps and are preferred both by men and women.

This particular tattoo is also based on a tribal-style tattoo design. The Polynesian armband tattoo meaning is commonly meant to represent protection. The human-like tiki figure that is sometimes etched in the tattoo represents the Polynesian Semi Gods who play the role of the protector. These tribal armband tattoos have gained extreme popularity in recent times and are done both by men and women.

Polynesian armband tattoo designs blossom extremely well both in the lower and the upper arm. They are done by people who display traits like strength, and power and are very protective towards their loved ones. Interestingly in the Polynesian culture, these tattoos also indicated the genealogy, sexual maturity, and hierarchical rank in the society.

If you love binge-watching the Viking series and are an avid follower of Norse mythology this symbol is not unfamiliar to you and a great idea to get inked with this design. Also known as Odin’s knot it symbolises the transition between life and death. Done with a thick solid black band or with thinner bands, the interlocking triangles can represent different things and depends on the person who has tattooed it.

Traditionally worn as a black armband tattoo they have become popular among both men and women. One who follows the Christian religion passionately can get this done where the black armband tattoo meaning will be the illustration of the Trinity, God the father, son, and the holy spirit as a single entity represented by the three interlocking triangles. Again a follower of pagan religion or a lover of nature will see the interlocking triangles as the earth, sea, and sky.

These armband tattoo designs are most popular among women according to several tattoo artists. They can be done both in black ink and with other colours matching the type of flowers that are inked in the tattoo. Now the floral tattoo designs upheld several feminine traits like tenderness, purity, and sensitivity, and in the ancient culture, it was also believed that flowers incorporate symbols of gratification towards God.

Now such tattoos are done in a pretty creative manner by incorporating flowers either inside the solid bands or on the border. Different flowers here reflects different meaning and the most common flowers used are dahlias representing proud love without compromise, rose representing the balance of love and passion, orchids representing beauty, strength, and luxury, and many more. They can be done on the wrists and forearms sometimes with a single flower and sometimes in a manner of a bouquet.

Done mostly in black ink the Hawaiian armband tattoos represent the Hawaiian culture. Representation of the flora and fauna including dolphins, orchids, turtles, and many more are very much evident in the tattoo designs. Traditional tattoo art is known as Kakau in the Hawaiin Islands and is mostly done in the manner of a tiara both by men and women.

Done in small to medium sizes the armband tattoo is both stylish and trendy and symbolizes strength, celebrations, protection, and leadership qualities. They can be either inked by a fashionable person as tribal armbands or done by someone to show honour and respect to the rich Hawaiin culture and natural beauty.

Previously bird tattoo design was used as body art but now they have been incorporated into the armbands too. You will find a group of birds sitting on the wire around one’s forearm or wrist and this demonstrates one’s love of nature and animals.

Done both by men and women and mostly in black ink in some birds’ armband tattoos we see the birds flying away. Now this reflects the independent and free spirit of the person who owns it and also symbolises peace, optimism, and happiness.

The versatility in meaning and style has made the armband tattoo one of the most sought-after tattoo designs in recent times. From expressing emotions to valuing cultural objects these designs can cater to all the needs of a tattoo lover.

If you want to try some other out of the box topics you can sure do: