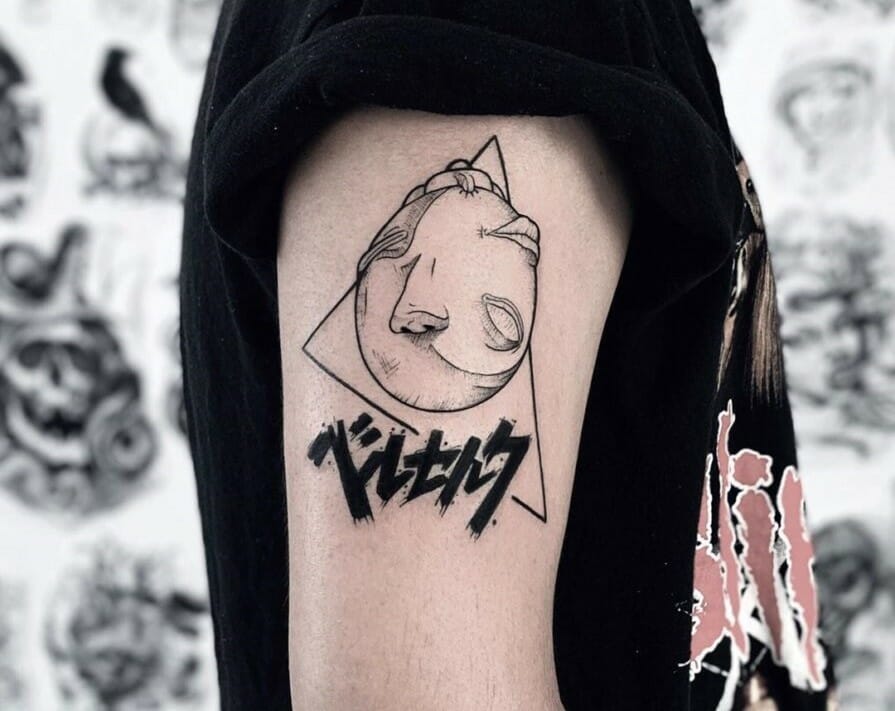 Any fan of dark fantasy manga has come across Berserk! And in case you missed it, there are even several anime adaptations! From friendship, to tragedy to fighting your own destiny and the likes, this manga offers everyone something! With amazing art work in the show, choosing the perfect Berserk tattoo might be hard. That’s why we are here to help! Check out our list of top 10 Berserk tattoos and get the best tattoo for yourself!

We’re starting the list off with a classic Berserk brand tattoo! In the manga, it’s officially called The Brand of Sacrifice. Representing the ultimate symbol of saying no to your destiny, our main hero Guts wears with pride (and pain). Endure the pain of getting this iconic Berserk curse mark tattoo! We promise this rugged design of the symbol will attract good spirits!

Egg of The Perfect World Tattoo

You know an apocalypse is coming when an egg with disturbing human features enters the story! Only creepy comments are allowed for this guy! However, it does make for an excellent Berserk reference tattoo! If it doesn’t turn your guts around, why not get it tattooed on your biceps or ankle? Just find a tattoo artist willing to get this piece of artwork done without vomiting!

The line between a protagonist and antagonist is getting blurrier by the minute! If you can’t decide between Guts and Griffith, it’s a sign you need to tattoo this tattoo! The tattoo artist did an amazing job transferring their expression from the manga. Powerful tattoo designs don’t even need color! Honor the legacy of this excellent read with a Guts and Griffith tattoo!

The Skull Knight and Guts Tattoo

Imagine seeing a seemingly living skeleton in armor standing across you. An apocalyptic scenery indeed! But don’t be afraid, he is the good guy! At least in the Berserk anime. If the fan community loves this mysterious character, so can you! A fully ‘fleshed’ Skull Knight tattoo would make an amazing biceps or thigh tattoo! So what are you waiting for?

Do you search endlessly for the perfect Berserk manga screenshot to tattoo? If you’ve stumbled upon our article on top 10 Berserk tattoo ideas, it’s a sign! Why not have this solemn scene tattooed on your hand? Japanese media is too good at conveying the right emotion with still images. If you like Berserk’s complex story arc, this might be the one for you!

Besides the Brand of Sacrifice, the Egg of The Perfect World is the second most popular Berserk symbol! If you’re looking for an awesome Berserk tattoo on a budget, search no more! We think this is the choice for you! You can immediately tell it’s an unsettling egg creature with the amazing shading. This Berserk character tattoo is well suited for any placement you desire!

Something about a blue haired naked fairy disturbs us. But Puck is such an awesome Berserk character, you have to tattoo him and Guts interacting! He is especially funny in his chibi form found in many panels. If you have an annoying friend you love to bits, this one might be for you! Square framing work wonders for this particular shot too. Just look at Guts’ expression!

A fan of Berserk and giant swords? Then tattoo the iconic Dragon Slayer! You can leave the design black and white like the original, or add some metallic coloring for the anime look. A rugged sword used by our main hero works great as an arm tattoo! Add the Brand of Sacrifice sign next to it to complete this cool looking Berserk design tattoo!

If Casca is your favorite Berserk character, search no further than this tattoo design! This girl has been through hell and back, which makes her the symbol of persistence. If you’re a survivor yourself, have a Casca from Berserk tattoo anywhere you want on your body! A triangle framing is a unique way to make the tattoo design stand out!

The main character from Berserk must be one of the most known anime characters! Continue the trend of getting him tattooed and don’t let this work of art be forgotten! You know stuff is about to happen when this is the expression we start with! The life of a mercenary in a horrible dark fantasy land must be crazy. Just like this tattoo!

Did you enjoy our picks for 10 best Berserk scenes to tattoo? Tell us all about it in the comments below! If you still haven’t seen or read this incredible story, go do it right now and see for yourself! You can thank us later, after you’ve settled on the perfect tattoo Berserk idea!