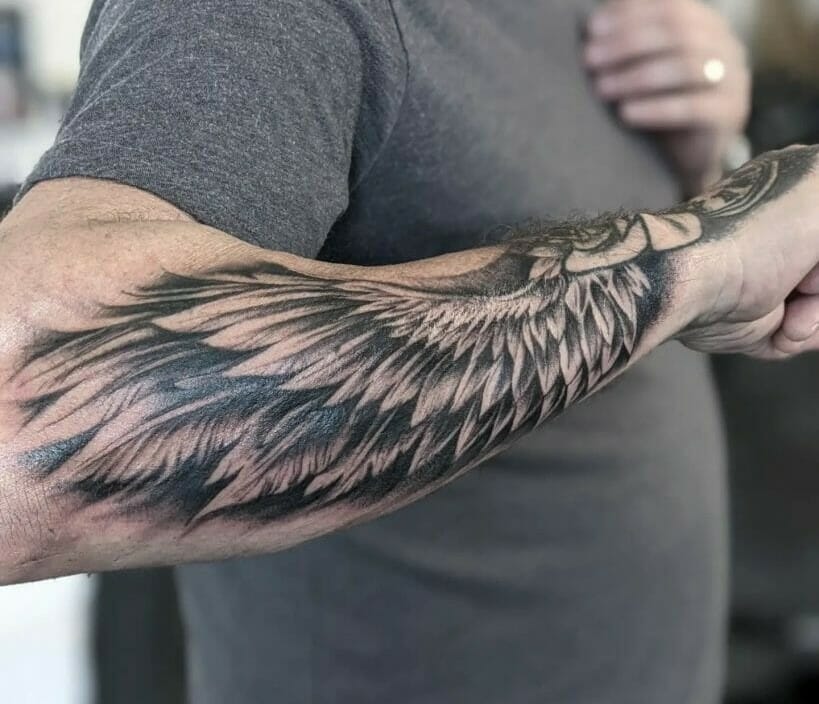 The wrist angel wings tattoo represents freedom, honesty, and purity. These can be a great way to express yourself in a subtle and beautiful way.

Throughout history, angel wings have been a symbol of God, freedom, and rebirth.

Small angel wings tattoos are a famous piece of wing tattoo among the youth, especially women. Having wrist tattoos with angel wings is a great way to amp up your aesthetic.

Be it a single wing tattoo or a set of wings, minimalistic angel wing tattoos are perfect symbolism of divinity. Angels are associated with honesty, bounty, and virtue. Bring out all the good vibes in you through angel wing tattoos on your wrist. Neatly drawn wings with intricate designs in clean black ink could stand out, giving you a truly angelic look.

This angel wings tattoo, one of the popular wing tattoos, drawn in precise and clear black ink, brings out the intricately inked details. The clock is at the base of the design, with a rose on top of it which the angel wings design follows. This is a perfect example of a feather angel wing tattoo. Usually drawn on either side of the wrist, it can vary in size and color. This wrist tattoo has been rated 3/10 on the pain scale.

This tattoo design is a set of double wings on either side and in the middle, there’s a word inked in a beautiful color and font. This memorial tattoo design is a neat little piece with great details inked in the wings, adequate shading and intricate strokes, the font of the letters is stunning and precise, with your liberty to choose the color of the letter. The outlines are neat and black and make the wrist tattoo look realistic. The lettered angel wings tattoo is a classic design loved by everyone.

The impeccable attention to detail makes this angel wings tattoo one of the best angel wing tattoos. The outlining is black and it makes the design appear semi-realistic. The corners of the feathers are fine dots instead of lines making the process almost painless. This angel wings tattoo design can be drawn on either side of the wrist and can definitely vary in size depending upon your choice. Angels represent purity and honesty, inking down angel wings on the perfect spot in your body could be a wonderful way to motivate yourself.

This is one of the most hyped-up angel tattoo ideas.

The above angel wing tattoo design has beautiful angel wings, with intricate feathered designs. In between the two wings, there is an angel with the horns of a devil, crying blood. While it is not essentially a wrist tattoo, there is no bar on where you want to get it. If you wish to show the world your angelic side with a hint of devilish rage, this angel wings tattoo with letters is the one for you!

The lettered angel tattoo is almost like a cultural phenomenon within the tattoo lovers community. Lettered angel wing wrist tattoos and body tattoo styles have come so far along in designs. Yet the stylized version of name initials remains one of the most popular tattoo ideas.

The lettered angel wing tattoo with initials is a majestic little piece with angel wings spread out in multiple, spacious layers, all adequately shaded and precisely detailed, with dots instead of lines, so the process is much more comfortable and less painful. The edges of the initial and the edges of the angel wings sort of meet halfway and gives the wrist tattoo a truly eye-catching and angelic look.

This angel wings tattoo is definitely flashy and covers your writs and lower arm area in the most beautiful way possible.

The design is super neat despite having too many details. This angel tattoo looks like a grim reaper on one hand, and a God tattoo on the other. It is a black and greyish tattoo that defines the greatness of fate overall. There is a divine halo around the figure with two angel wings and this tattoo is a 10/10 majestic!

This particular angel wings wrist tattoo has your favorite quote or even just a word that you love.

Tattooing a word you love or your favorite quote from a movie or a book has always been a popular tattoo design practice among the youth. This angel wings tattoo does not come alone at all and you can get whichever quote you choose to accompany your angel wings and feathers.

This body art has intricate details with adequate shading while still retaining its minimalistic attributes in certain areas. Along with that, it tattoos letters that can spell any word you wish, in any font you choose, in any shape you prefer.

The minimalist angel wing with a halo tattoo is one of the most widely demanded tattoo ideas, be it a wrist tattoo or body art. Once you pair a halo with a set of double wings of an angel, there is no going back! This tattoo design is another of the famous timeless classics.

Most tattoo artists rate this tattoo a mere 3/10 on the pain scale considering it lies more on the minimalist side, so it doesn’t have too many strokes, and the shading and detailing are mostly done in fine points, which adds to the beauty of the piece. On top of the two wings, there is a tiny halo, which subtly sets you apart to represent freedom and the divine realm. The halo as well as the feathers of the wings are outlined in black ink, precisely and carefully.

The single-winged angel wing tattoo design is the perfect example of a simplistic art style. The single-wing angel wings wrist tattoo will set you apart from everyone. It has a unique and simple design highlighted with multiple aesthetics.

This wrist tattoo is a piece with multi-layered feathers of one wing of an angel, stylized in a unique way. All the layers are detailed carefully, and the shading is done in single strokes, making this angel wing tattoo fall under the semi-minimalist category. The outlines of this tattoo are drawn in plain black ink and in a precise manner, neatly and carefully. This particular tattoo is drawn on one side of the wrist, since it is only one wing, it can be drawn on either side, to give it the impression of a pair. There are three layers of feathered patterns in the wing, representing some of the core faith of what angels stand for. You can show your spirit of unity and freedom through this subtle wrist tattoo of a single wing of an angel.

Therefore, if you wish to represent angels, represent freedom, solidarity, heaven, and purity, or if you simply love angels and how beautiful they are, angel wing tattoos are the best way to express yourself through art and precision. Enhance your aesthetic more with angel wing-body tattoos, especially when they come in whatever shape, size, or style you prefer!

Or you could go get any one of these suggestions.

What is a wrist angel wing tattoo?

A wrist angel wing tattoo is a popular tattoo design for both men and women. It typically consists of an angel wing, or wings, that wrap around the wrist. The wings may be combined with other symbols such as hearts, stars, or crosses to create a unique design. The placement of the tattoo on the wrist gives it a sense of protection and is thought to be a symbol of love, strength, courage and faith. Some individuals may even choose to have the wings facing outward for a sense of freedom or protection from harm. Wrist angel wing tattoos can also be used to commemorate the loss of a loved one, as well as serve as a reminder of our own personal guardian angels.

Wrist angel wing tattoos vary in size depending on the individual’s preference. They can be as small as a few inches or they can span the entire width of the wrist. Generally, smaller wings are more popular because they are easier to conceal and make a bold statement without taking up too much space. However, larger wings may be preferred by those who want to make a bigger statement or if the tattoo is meant to commemorate a significant event in the individual’s life. Ultimately, the size of the wrist angel wing tattoo is up to the individual.

How much do wrist angel wing tattoos cost?

The cost of a wrist angel wing tattoo varies depending on several factors such as the size, complexity, and color. Generally, smaller tattoos will cost less than larger ones. Additionally, simpler designs without many details tend to be cheaper than more intricate or colorful designs. On average, a wrist angel wing tattoo can cost between $50 and $200, with more complex designs costing more. It is always best to consult a qualified tattoo artist for an accurate estimate.

Are wrist angel wing tattoos painful to get?

Getting a tattoo can be painful, but the intensity of the pain will vary from person to person. The location of the tattoo and its size may also affect how much discomfort is experienced during the process. Generally, wrist tattoos tend to be less painful than other areas of the body due to their thinness and proximity to nerves in the hand.