10 Best Viking Tattoo Ideas You Have To See To Believe! 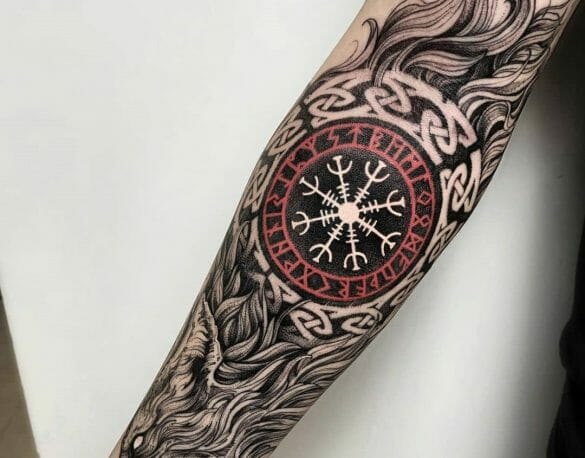 Want to know 10 of the best Viking tattoo ideas? Keep reading to find out more and also check the pictures with Instagram handles.

The Vikings are known to be so much more than just barbarians and plunders.

They were pretty complex and unique individuals. The Vikings were farmers, believers of destiny, skilled seafarers, keen travellers, and worked towards the universe’s balance.

Their beliefs and lifestyle have served to become an inspiration for films, literature, and tattoos too! Did you know that little historical evidence confirms that the Vikings are said to be heavily tattooed, and this belief is commonly accepted? Their behaviour which is seen as notorious, is associated with strength, bravery, and fearlessness. Since these symbols are beautiful and meaningful, they are great for inking on your body. For those from Scandinavian countries, getting a tattoo of this can be an excellent way to honour their heritage, while for others, it can be inked to celebrate these values. Apart from these, it can also be quite a thought-provoking design inspired by beliefs, mythology, or destiny. Let’s keep reading this article to know the ten best Viking tattoo ideas and ancient designs that a tattoo artist can ink!

The Vikings are celebrated all over the world for their skill and fearlessness. Getting yourself inked with a Viking warrior tattoo can symbolise your honour of the bravery and strength these individuals portrayed. It can also send a message to the rest of the world on how determined and fierce you are as a person. Getting this tattoo can be a way to represent your strengths and how you see yourself. For those who have watched the ‘Vikings’ tv series, you will be able to recognise that this tattoo is of the fan-favourite character, Floki.

Getting this warrior Viking tattoo gives off an intimidating and realistic look. The detailing of this tattoo is beautiful, and the black ink is inked to perfection. It just represents so much power and has a certain amount of boldness to it. If anyone sees this inked on you, it will give them the impression that you are an influential brave person. If you want to make your body art tattoo unique, you can add more of what Vikings wore, like Viking symbols, runes, and even weapons. As seen in the image above, the tattoo is inked on the hand. However, you can also opt to get it tattooed in your body, like your calf, back, upper chest, and more!

Body art is a beautiful way to express yourself, have personal identification, establish a social hierarchy, and make other people feel intimidated. For these reasons, many people around the world are drawn towards traditional Viking tattoos. It is their way of honouring the slain warriors and notorious raiders of the world of the medieval. If you wish to go for an approach like this, you are most likely to choose a Viking tattoos design that is detailed and large. This could vary from numerous images that portray a story or even a series of intricate symbols and patterns.

Like we all know so far, the Viking slain warriors were known to cover their bodies with tattoos all over. They would usually choose a location that gave them a large enough area to detail the tattoo design. In the image of the modern Viking tattoo designs shown above, you can see a gorgeous yet fearless design of an exquisite traditional Vikings design. It has powerful symbols behind it, and just the imagery of the tattoo shows how powerful it is. Its detailing is flawless, and it would look amazing on the chest, shoulder, arm, or back.

Viking tattoos inked on you are a great way to express yourself, show the world who you are as a person, what matters to you, and what is good for you. Getting a Viking tattoo sleeve is a great way to express this as it portrays the most visibility for a design of this stature. You can choose from various kinds of design ideas for different sizes. Sleeve tattoos are easy to show off as well as cover. Tattoo artists say that this kind of Viking tattoo design only has moderate pain, so if you plan on getting an elaborated tattoo, you need not worry.

The image of the modern Viking tattoo designs shown above is a stunning Viking representing their fearlessness and skills. Getting this tattoo design shows how you hold such qualities and signifies who you are as a person. The textures of this sleeve tattoo design are brilliant, and the colours are radiant. It can also be tattooed on your body as a way of showing your respect for the honour of the Vikings and all that they stand for. Getting such Viking tattoo designs as a sleeve tattoo would look incredible as the entire structure can be covered in it, and it isn’t limited. You can also more symbols to it.

The Vikings are celebrated for their incredible power and skills seen on the battlefield. Getting their chosen weapons tattooed on your body could be a beautiful and powerful symbol of it. It can also be a representation of formidability, bravery, and bloodlust. A dagger is one of the weapons that the Vikings commonly use. These blades are incredibly stunning and show beautiful craftsmanship. It also is a representation of strength, courage, bravery, and bloodlust. Viking axe tattoos and sword tattoos are also some commonly used Viking symbols and what they stand for.

There are many ways to portray the Viking, but just getting a tattoo of a single weapon with runes attached to it or a warrior. These runes help in creating a unique message for the tattoo design. A weapon like a dagger tattooed as body art is a drop-dead gorgeous tattoo design that looks badass and gives off a specific impression about you that you can’t be someone to mess around with. It would look amazing on the hand as it nicely fits and aligns with it. However, you can also get it on the back as it looks stunning there too. If you are planning on getting a new tattoo, you should consider this the next one for you!

Many people think that Vikings are more a male-dominated arena, where even their tattoos are more optimised for males. But their tattoo designs inspired by Norse mythology also looks just as stunning on a woman! While most of the tattoos may be seen as too graphic or violent for most women, they’re some great tattoos that can suit you perfectly. This gorgeous brooch tattoo design isn’t too extravagant or flashy and can be perfect for someone looking for the representation of something powerful but doesn’t want it to be noticeable. Most Viking designs are seen to be quite complex, while this is a simpler version of it.

The textures and details of this tattoo all come together flawlessly, and the colours align well with each other. The colours aren’t too bright either and are more neutral. It makes the overall design look amazing but not too flashy. It is still very eye-catching, and it would be amazingly tattooed on one’s body. This brooch is said to be made out of copper alloy and is approximately 5.5cm. It may represent Jormungandr, son of Loki, and the giant Angrboda, the brother of Fenrir and Hel. This Viking tattoo has a mind-blowing story behind it and is a great tattoo to get to portray that.

The sword tattoo is one of the most famous Vikings tattoos for one to get. It represents strength, bravery, and skill. It is an excellent tattoo for one to call to portray these qualities and show the world who they are as a person. It shows how you would protect a person no matter what. Even if you don’t want to represent anything, you can always get the tattoo because it looks cool and badass. A lot of people also call this to honour the Vikings and all the bravery their existence signifies.

The detailing of the design is inked to perfection, and it is a beautiful symbol of what the Vikings stand for. The whole imagery of this design only looks so powerful that there is a story behind it. So getting this tattoo can give out that certain aura about who you are as a person. It is also a pretty unique tattoo that would look great on the chest, back, hand, arm, leg, calf, shoulder, and wherever else you think it will suit you.

Ships play an essential role in the lives of the Vikings. It is what helped them conquer new lands and be victorious in their raids. One of the inventions they came up with, known as the longboat, was quite impressive as it was fast, light, efficient, and well made.

It is said that the prow of the ship was carved from an animal head. This animal is usually a snake eating something or a dragon, which was installed to bring fear in others. The Vikings’ ships are known to be associated with adventure, new beginnings, and travels. All these factors make for an impressive ship tattoo associated with the Vikings. It could signify how one has more desire to do or achieve more in their lives and is willing to do anything and take every risk to get there. Getting a body art of this would be fantastic if you want something that represents these factors.

This tattoo design screams powerful. It is an astonishingly unique design with both a Viking woman and a ship, and these are powerful symbols of the Vikings. It is incredibly eye-catching, and anyone who sees it will be in awe of amazement at how amazing this looks.

The warrior is a very realistic, lifelike portrait of a Viking warrior, and you can see the strength she holds in her eyes. The entire design portrays how it has a story behind this image. There are two influential figures of the Vikings used in this tattoo design. This can help make the person tattooing it on their body feel empowered and honour the Vikings’ bravery.

This helm of awe tattoo is one of the most popular Viking symbols choices of a Viking-related tattoo design. It is fascinating to look at and also seen to be quite rich in symbols.

This helm of awe was known to be a stave that was magical with protection symbolism. It was also believed that it gave many Viking warriors the courage and strength to achieve victory in the many battles they fought. Since this striking piece of the helm of awe design has quite a fascinating story behind it, it can be a great conversation starter, so make sure you wear this inked design with pride!

If you are looking for tattoos that signify guidance, protection, and direction, this Viking compass is the tattoo for you!

In the many depictions of Vikings, this Viking compass was seen to be the object they brought with them on their every journey for good luck, to face difficulties, and to weather any storms that may occur. If you want to remind yourself to stay on the right path, you should get this tattoo!