10 Best Scarface Tattoo Ideas You Have To See To Believe! 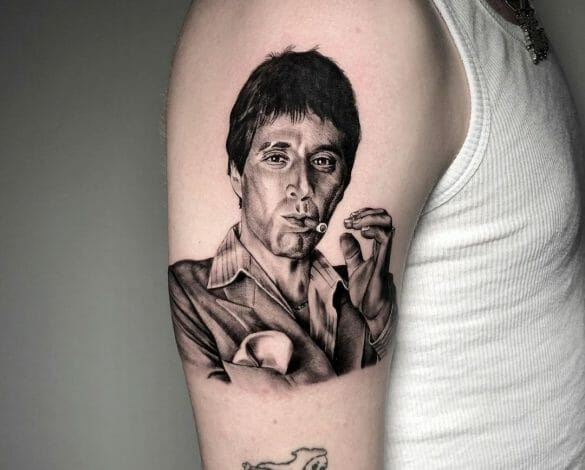 Are you a cinephile whose favourite genre of movies is crime and action? Then here are some amazing ‘Scarface’ tattoo ideas for you to check out.

‘Scarface’ is an American crime drama film that was remade in 1983 based on the original 1932 movie by director Brian De Palma.

The 1983 crime drama has become more popular over the years and has even gained an iconic cult status among movie lovers and general audiences alike. The 1983 version starred the actor Al Pacino, Michelle Pfeiffer, Steven Bauer, and Robert Loggia.

‘Scarface’ traces the rise and fall of a poor Cuban refugee named Antonio or Tony Montana, who slowly rises up the ranks and becomes a powerful criminal drug lord. Upon release, the movie did not perform, and critics did not like the film due to the graphic display of drug use, extreme violence, and severe use of profane language. However, over the years, the movie has been reevaluated by critics who think it is one of the greatest gangster movies to be made.

The movie has also stood out because of its memorable lines and has been compared to other movies which also has achieved cult status like ‘American Gangster’ or ‘The Untouchables’ by director Brian De Palma which was about another famous American gangster named Al Capone. However, the movie was also criticised because of the way it negatively portrayed the Cuban immigrant community as involved in crime and drug dealing.

For those movie lovers whose favourite actor is Al Pacino, the film ‘Scarface’ will definitely stand out. The role of Tony Montana has almost become an icon from the past, and Pacino was nominated for a Golden Globe Awards as well. Consequently, if you are interested in adding an Al Pacino tattoo to your collection, you may want to get a ‘Scarface’ tattoo with his intense stare. This can be a great tattoo to get in order to pay homage to the movie!

Elaborate ‘Scarface’ Tattoo Designs For Your Back

If you want to reflect Tony Montana’s attitude towards life and never do anything in small measures, you can definitely go ahead and get a huge, elaborate and complex ‘Scarface’ tattoo for your back. As seen in the picture above, the wearer has gotten a tattoo based on the film that spans their entire back. However, this type of tattoo will take a lot of time to complete and will cost quite a lot too.

Amazing ‘The World Is Yours’ Tattoos From ‘Scarface’ Movie

The repeated phrase ‘The World Is Yours’ in the film has a deep significance for the theme of the movie, and the protagonist Tony has a complex relationship with the phrase as well. The phrase basically encouraged Tony from the start to make his own destiny through violence and cunning ideas. However, it was also the same phrase that was still visible till the very end when he faced his own downfall in a cruel twist of irony. If the phrase speaks to you as well, you can get a tattoo with the phrase along with the ‘Scarface’ globe tattoo.

When the casting director of the movie wanted to cast Michelle Pfeiffer in the role of the lead female protagonist, both actor Al Pacino and Brian De Palma had argued against her. They wanted to have a more well-established actress like Glenn Close or Carrie Fisher in the role. However, the role of Elvira Hancock would turn out to be the role that would push Michelle Pfeiffer towards stardom. Even though she was a relatively lesser-known actress, Pfeiffer dominated every scene she was in and completely changed the way the girlfriend of a powerful drug lord is portrayed on the screen. Thus, you can get a tattoo of Elvira, as seen in the picture above, along with the words ‘The World Is Yours’ to refer to the movie.

Her dialogue delivery and outfits in the movie have also become quite iconic. Thus, you can also get a realistic tattoo portrait of her character along with the well-known 1980s dresses that she wore. The cigarette in her hand makes the tattoo feel even more realistic and authentic.

If you want, you can also add other tattoos of more protagonists in movies who have deeply inspired you and whose stories speak to you. You can also be a big fan of the actors who portrayed the role with their heart and passion. As seen in the pic, the wearer has added other popular culture references like the Joker and his laugh. Consequently, if you want to add more popular culture references to your ‘Scarface’ tattoo based on your interests, you can definitely go ahead and ask your tattoo artist for more ideas.

Anybody who has watched the film ‘Scarface’ will know how the style of the film was quite new for the time it was made in. The new style of the direction of action and fighting scenes are still given recognition even after decades. For his role, actor Al Pacino learned different martial arts to train his body and help him get into shape for his character. In addition to that, the last scene of the film has also gained fame for its continuous bloodshed shot from different angles. Thus, if you are an absolute fan of the film, the chances are that you also like violent action movies and can get bloody ‘Scarface’ tattoos if you like.

If you are looking for more bloody and gory tattoos based on popular American movies, which are also considered cult classics, you can definitely check out these amazing Boondock Saints tattoo ideas for your next tattoo!

If you want an elaborate arm sleeve ‘Scarface’ tattoo, you can also get inspired by the amazing tattoo in the picture above. Here, the artist has drawn the famous ‘The World Is Yours’ Scarface tattoo on the globe statue that catches Tony’s attention when he is slowly rising up the ranks. Therefore, if you want to create an arm sleeve tattoo that is intricate and detailed, you can definitely use this idea.

If you want a ‘Scarface’ portrait tattoo, you should definitely get an icon tattoo of none other than Tony Montana, the protagonist of the film. The character of Tony has reached icon status, and Al Pacino was even nominated for a Golden Globe award for his portrayal. While audiences were shocked at Pacino’s portrayal of a rough and tough rich gangster as opposed to the smooth and calm Michael Corleone he played in Francis Ford Coppola’s ‘Godfather’ franchise, his performances in both the movies were quite awesome. Consequently, if you want a tattoo of your favourite character from ‘Scarface’, go ahead and get a realistic tattoo of Antonio from ‘Scarface’.

‘Scarface’ Tattoos With Iconic Dialogues From The Movie

Apart from the repeated phrase ‘The World Is Yours’ in the film, ‘Scarface’ also has a number of iconic dialogues which any movie lover will have thorough knowledge about. Dialogues like “Say hello to my little friend” or Elvira’s “Don’t call me baby, I am not your baby” are instantly associated with this film. Consequently, if this film is an absolute favourite, you should go ahead and get these dialogues tattooed along with the face of Tony Montana or Elvira Hancock as well.

If you are looking for unique, distinctive or unconventional ‘Scarface’ tattoos, then you should ask your tattoo artist to create a great tattoo design inspired by the movie. As seen in the picture, the wearer has gotten a picture of Montana along with the phrase ‘The World Is Yours’. However, they have also added beautiful flowers to the ‘Scarface’ tattoo to make it more attractive. Similarly, you can also use the dialogue “Say hello to my little friend” to make a unique ‘Scarface’ tattoo of your own.

If you love American gangster movies or crime drama films that are full of violence, action and memorable lines, then ‘Scarface’ probably has to be one of your most favourite movies. The movie may not have been well-appreciated when it was first released but has a strong fanbase even now. Consequently, if you want to display your love for the movie, go ahead and get a wonderful ‘Scarface’ tattoo!