10 Best Rockabilly Tattoo Ideas You Have To See To Believe! 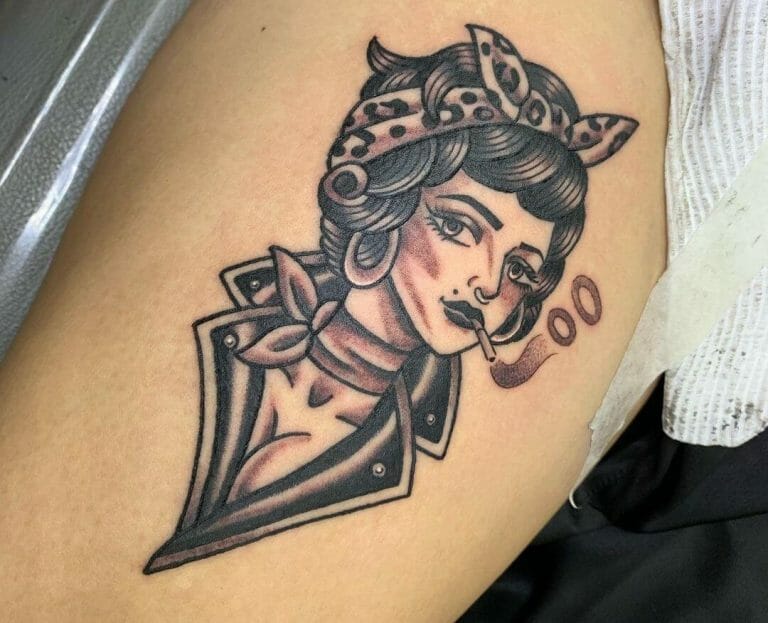 Rockabilly is one of the earliest styles of rock n’ roll music.

There is an American society that takes pride in dressing in rockabilly fashion. Rockabilly tattoos can be pretty perfect for them.

Before you go to get tattoos, search for a good tattoo parlour with a clean environment. The entire shop should give out a vibe of a clean environment. New tattoo shops are opening every day equipped with current techniques, latest equipment, like statim autoclaves, surface anchors, and testing material. A business owner of each new shop today is keeping things in check to keep their business in the sun longer. Keep reading to find your favourite rockabilly tattoo.

Skull tattoo is a pretty popular tattoo design, if not the most popular. Of course, they beat some negative meanings, but what many people don’t know is that skull tattoos mean some positive things, like new beginnings, rebirth, reminders of our mortality, thus a reminder to live our lives to the fullest. That’s why it’s pretty natural that they would be a popular choice for rockabilly tattoos as well. The rockabilly skull tattoo in the picture above is of a skeleton with a 1950s hairstyle holding a mike singing and some floral designs on the side. The shading work on the neo-traditional tattoo is pretty amazing.

Cherry tattoo was and still is a widely popular choice for rockabilly tattoos. Cherry tattoos have various meanings, but in most cases, they help express the feminine side of the wearer. They also express fertility and desire of the wearer. Cherry tattoos come in many variations, like a cherry skull, cherry devil face, or cherry heart like the picture above with two tattoos of cherries on two feet. The two beautiful red cherries of each tattoo are hanging from a single stem and are in the shape of hearts. The tattooing style seems to be traditional yet inked with a slightly modern touch.

Rockabilly tattoos are mainly done in American traditional style, neo-traditional style, or new school style. Animal tattoo designs are popular in all these styles. Additionally, tattoos of different animals mean different things, so you get a lot of options to choose the exact emotion you want to express or it can be just an adorable tattoo, like the pin-up dog tattoo in the picture above. It’s a design of a pug in a rockabilly pin-up tattoo style standing out of a circle window similar to the shows that were seen in the 1950s. The tattoo is done in the American traditional style.

Millions of fictional stories have been written and millions of fictional movies have been made. When you’re going for a specific style of tattoo, like a rockabilly style tattoo, then choosing a fictional character, maybe your favourite, can be perfect. It’s easier to draw up a fictional character in a specific style, as evident from the tattoo in the picture above. It’s a design of Sally from the 1993 movie ‘The Nightmare Before Christmas’ in a rockabilly style with a flower and some leaves. She is dressed in 1950s fashion attire. You can choose a character from Alice In Wonderland, Harry Potter, Doctor Who or something else.

Bird tattoos have been a favourite for many people since the art of tattooing began. People get them primarily for the things they represent, like freedom, hope, happiness, peace, and more. Additionally, different kinds of birds symbolize different things. Now, sparrows and swallows are the birds that can be seen in most rockabilly tattoos. Swallows are a little more popular than sparrow tattoos as swallow tattoos hold great significance to sailors as well. Like, the picture above holds tattoos of two swallows on both sides of the chest of the man. This exact design was quite popular among sailors to express their journey in the sea.

Rockabilly tattoos can be pretty adorable owing to the usage of bright and bold colours in the tattoo designs. The 1950s American fashion was extremely colourful. Men and women all dressed up in all kinds of bright colours and some of those styles even became iconic. That’s why these tattoos look gorgeous and adorable as well, as can be seen in the picture above. It’s a neo traditional tattoo of a picnic basket with an adorable ribbon and flower on the handle, two hearts around, with fruits and cheese in the basket, a plate and a cup on the side and a beautiful red coloured sheet below.

Pin-up styles probably started back in the very late 1800s, but the term only started being used during the 1940s. That’s why the style is mostly associated with the ‘natural beauty’ look of the 1940s. At that time, World War II had just ended and the materials for dress up and make-up were available in very little amount. The rockabilly pinup tattoo of the girl in the picture above depicts the style quite perfectly. The tattoo is a rockabilly design of a girl in pin-up hairstyle, ear rings, a swallow tattoo on her cheek, a cigarette on her mouth, and the words ‘tough love’ written beside the tattoo.

Rockabilly girl tattoos have stayed as a very popular option among people who appreciate this tattoo style. Mostly, the portraits of girls of the rockabilly tattoo designs are pin-up models. Pin-up models are still seen in 1950s fashion. The mass produced pictures of the pin-up models are of 1950s models in bright coloured dresses and accessories. Hence, you can get any rockabilly girl tattoo of portraits in that fashion, like the rockabilly tattoo sleeve picture above. It’s a tattoo of Snow White in pin-up style attire, with tattoos on her face, neck, and shoulder, an apple below. The shading on the entire tattoo has been done by dot work.

Hopefully you have found your favourite tattoo from the list above. Rockabilly tattoos will stay evergreen and that’s lifetime guaranteed. We still have a few more suggestions that you might still accept as best rockabilly tattoos –

Take any 1950s tattoos and include flames, flowers, spider webs or pin-up fashion elements to get the best rockabilly tattoos for men and women.

You can get tattoos of 1950s rock artists for your rockabilly tattoo.

You can also choose tattoos of dice in traditional forms for your rockabilly tattoo.