10 Best Resident Evil Tattoo Ideas You Have To See To Believe! 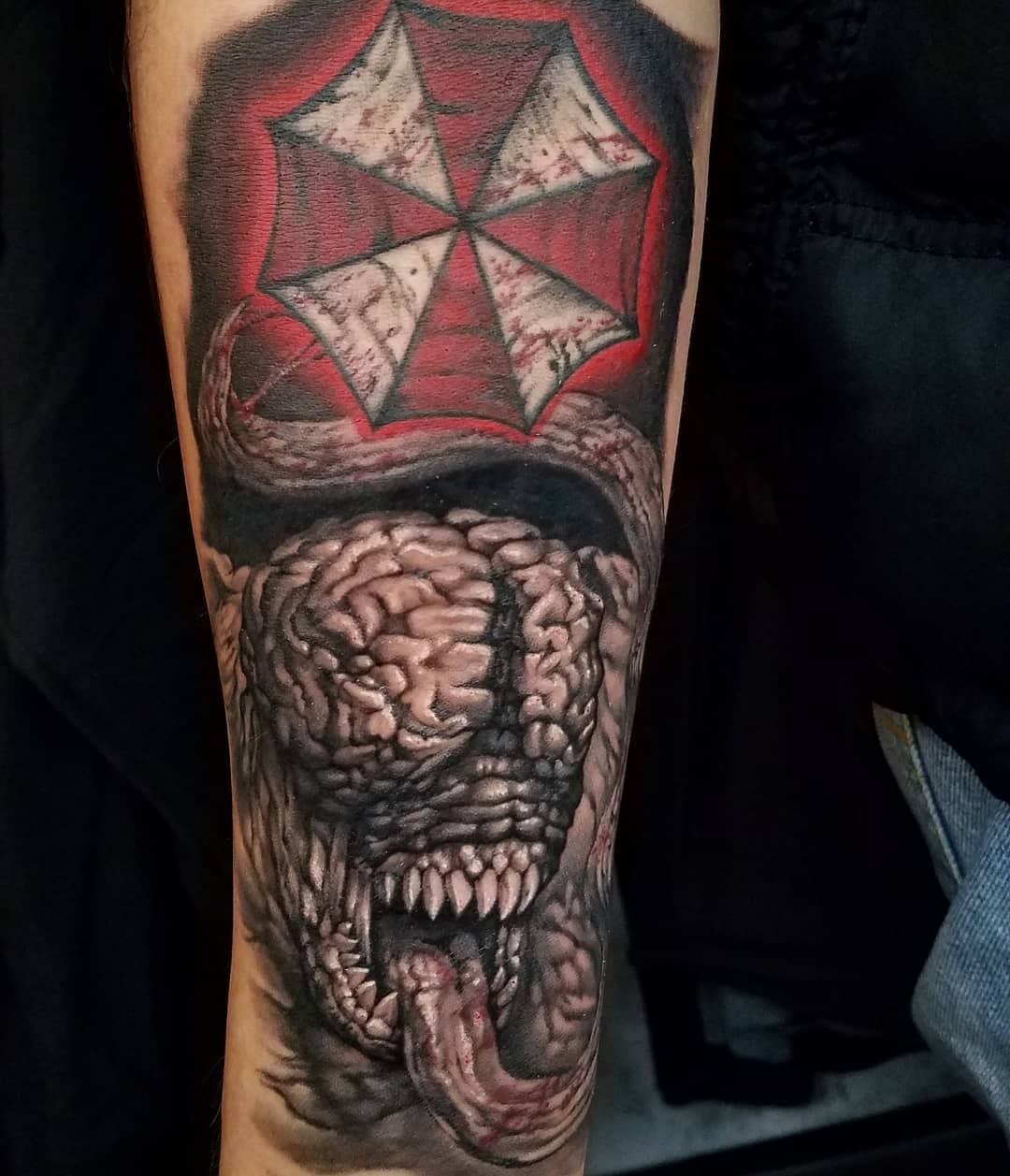 With its rising popularity amongst the gaming community, Resident Evil movie and videogame tattoos have also risen to fame amongst fans. From simple tattoo ideas to complex sleeve tattoos, bio-organic weapons, as well as favourite characters like Leon Kennedy, Chris Redfield, have found their artistic way under the skins of fans as tattoos.

There are many fans that choose great Resident Evil virus tattoo ideas, including the classic Umbrella Tattoo, Resident Evil Village Lady Dimitrescu daughters’ tattoos, as well as Resident evil tattoo sleeve ideas. Minimalist wrist tattoo design ideas are also quite common amongst players and gamers who stream online. One of the most common choices amongst these tattoos that fans love is that of Nemesis, who is one of the most iconic villains from the fandom. Fans have even invested in game-themed tokens like tools, necklaces, and the like.

Other than Nemesis, tattoo artists also have a lot of other things to offer in the form of body art thanks to the plethora of characters, villains, and bio-organic weapons that fans still remember from the glory days. The recently released game ‘Resident Evil: Village’ as well as the movie ‘Infinite Darkness’ is a class of its own in the Resident Evil series and has been greatly appreciated by gamers and the fanbase. The release of these two has made a major impact on loyal fans of Resident Evil and it is safe to say that most of them have probably been thinking about getting a new tattoo related to this game or improve their old tattoos with a few additions. All in all, the Resident Evil universe sure has a lot of other things to offer other than games and movies. It has wormed its way into the life of gamers and the hearts of many who have not only been obsessed with things like an action figure and game merch but also being obsessed enough to get permanently inked.

Umbrella is one of the robust pharmaceutical companies in the gameverse. The entire story of Resident Evil started with the fictional Umbrella corporation’s nefarious plot to develop bio-weaponry to control the world. No matter how much you hate this fictional organization and the villains tied to it, you cannot deny even for a little bit, that there is no Resident Evil without Umbrella. You cannot deny that the Iconic red and white logo of the Umbrella Corporation is the most common recurring element that fans can instantly recognize and the added bio-weapon called the Licker would be a great addition to just the simple logo. The logo of Umbrella is a recurring object all throughout the games the movies and if you’re a rookie fan of this franchise looking for good tattoo ideas, you can get this classic umbrella tattoo without the licker as well for starters.

Nemesis is one of the most iconic villains in the Resident Evil franchise. He has been featured as a major bio-organic weapon created by Umbrella not only in video games but in the movies as well. Cerebrus is acquired an equal amount of fame being a bio-engineered zombie dog that has appeared on both platforms. This tattoo inspired by the Nemesis and Cerebrus is clearly inspired by the second Resident Evil movie, ‘Apocalypse’. The details in this tattoo scream “Fan of Resident Evil” in neon letters. If you’re more of a fan of the antagonists rather than the heroes, then this tattoo seems like a great choice.

Lisa Trevor was one of the most feared Resident Evil antagonists that you will find while playing the first game. For purist fans who have played this series from the start, this black and white Lisa Trevor tattoo is a way to make heads turn. Lisa Trevor is considered to be Patient Zero of the Umbrella bioweapons project and this creepy design is bound to bring back a bit of the nostalgic memories of the game. This black horrific mutated thing that was once a human is a result of the constant viral experimentation carried out by the Umbrella Corporation and her tragic backstory in the game truly upholds the horror element which also resonates from this tattoo. Getting a tattoo of Lisa Trevor is not for the faint-hearted and only for those who live for horror and nostalgia for Resident Evil.

If you don’t want to creep out your folks at home and at work and still want to stay true to the fanbase by getting a Resident Evil tattoo then this adorable tattoo is a great choice. Fans of the game will instantly recognize the green herb in the game series which was one of the most crucial health items used to increase and improve physical strength. Thanks to this green herb, many fans have overcome nearly impossible obstacles in the game and in many times have even saved gaming time. Nostalgic fans have been ever grateful to this element and getting this cute tattoo will surely be food for great Resident Evil artwork on your skin as well as pleasing to the eye for people at work and the ones back at home.

If you are a fan of Resident Evil then at one point you must have gone head over heels for the mysterious character Ada Wong. This tattoo is perfectly detailed along with great shading work to make it look identical to the first videogame character design. She is one of the most popular side characters in the game and getting a tattoo of Ada Wong to forever be etched on your skin is a great way to show your loyalty to the fanbase and your bias towards this enigmatic spy who has stolen the hearts of many gamers.

The Resident Evil franchise is a hub of bio-engineered creepy monsters and you are bound to be spoiled for choices if you want a BOW (Bio-organic Weapon) tattoo. However, if you are a fan with a creative flair, you can always design your own BOW concept and get it inked. This is an example of a mutated wolf infected by the T virus along with other elements from the franchise like the iconic T virus vial, and the classic Umbrella logo.

Black And White Resident Evil 4 Tattoo Of Leon And Krauser

From Rookie cop to one of the most valuable agents the DSO or the Division of Security Operations has, Leon S Kennedy has made quite a name for himself in the gameverse as one of the best titular heroes in Resident Evil. Jack Krauser being a supporter of the villainous Albert Wesker is the exact opposite of what Leon portrays. This tattoo is especially for those gamers who are particularly fond of the fourth game in the series where these two characters put up one of the most iconic fights in the events of the games.

Sherry Birkin is one of the most lovable characters alongside Claire Redfield in the gameverse. Even though she grows up to be quite a badass character in the sixth installment of the game series, her younger self in Resident Evil 2 stayed in the hearts of most gamers. This beautiful and detailed tattoo of Sherry Birkin from Resident Evil 2 is a great way to preserve the memory of a young resilient child who despite all odds, braved her way through and came back stronger and victorious.

Lickers were the most common recurring antagonists in the game which were bio-engineered weapons created by Umbrella. Not only were they a major annoyance, but a great element that could be referred to with the gameverse. This badass tattoo of a licker is bound to scare the kids and wow the fans as well who will give it the appreciation it deserves.

Gamers who have recently played the new Resident Evil: Village would die to have this tattoo because of the rising popularity of Lady Dimitrescu and her daughters. A tall vampire woman with nefarious purposes living in a high-end mansion in a bleak village is bound to give anybody the creeps and so will this tattoo.

However, many tattoo enthusiasts do not want a full-blown reference of the game forever etched on themselves which they might regret having in the end. They have opted for more subtle tattoos bearing witty and subtle references to the fandom thanks to the easter eggs set inside the