10 Best Neo-Traditional Tattoo Ideas That Will Blow Your Mind! 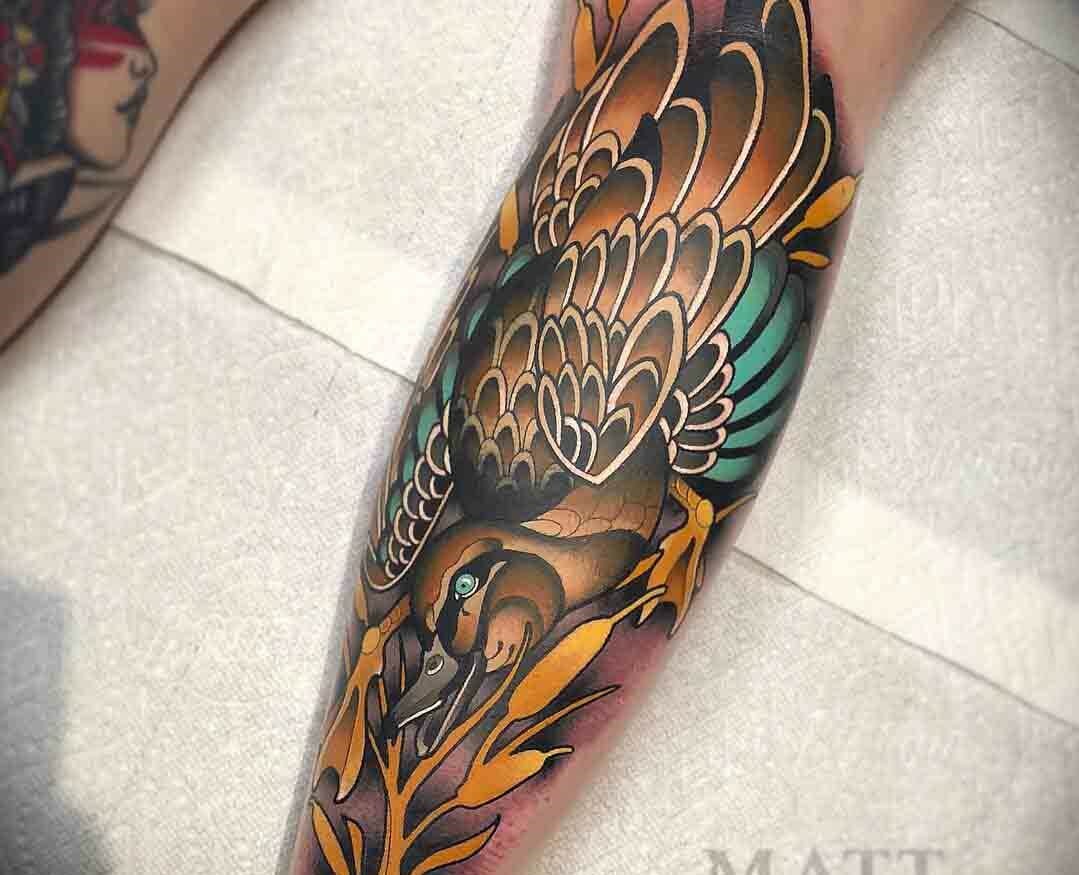 Looking to get a bold, illustrative and ostentatious tattoo? Check out these gorgeous neo-traditional tattoos that will make you want to run to the nearest tatt studio.

The potential of illustration and striking creativity is thoroughly and decadently experimented with, through neotraditional tattoos.

It gives body art, an exquisite twist that mixes old-school styles with the modern era′s bright colors. Resulting in tattoos with a classic look and a bad ass style no one can resist.

Created with bold outlines, advanced methods, and a wider array of styles and motifs; neo traditionalism has become a popular choice among tattoo enthusiasts and tattoo artists.

Their rich history consists of extravagant art blended with American traditional tattooing, making it one of the most sumptuous, aesthetic and flourishing styles of art.

While it is far from the American Traditional style, it, however, does have some common themes including bold lines, black outlines and of course, extravagance. But, line widths often vary from the traditional style or American traditional tattooing.

Neo traditionalism had made its breakthrough with lush colours, striking images inspired by old-school art and the beauty that lies in the old-school and modern culture. It continues to thrive and will do so for a very long time.

Together, we shall explore the lushness, extravagance and aesthetic prowess of neo-traditionalism. If you′ve been yearning to enhance your body art game, try starting with one of these really vibrant artworks.

For those who aren′t all that acquainted with what is a traditional and neotraditional tattoo style, let us enlighten you.

While they are slightly similar, neotraditional tattoos use more motifs, lush and vibrant colours and their colour palettes have more choices. They use a lot of animal motifs together with flowers and portraits in their art style.

As we can see in this beautiful piece of artwork, the artist created a beautiful black and white fox with a flower motif. Absolute clarity and bold outlines are used to create the tattoo′s overall outline, giving it a glossy and majestic look.

This regality in the art′s neo-traditional motifs does not fail to impress.

The shading in some portions of the tattoo highlights the vibrancy of the darker tone used. Despite its lack of colour, it has dramatic look that we often associate with neo-traditionalism.

Medusa, the ultimate femme fatale, is frequently represented as a paradox.

She is a striking image whose legend is a part of history that continues to thrive in the modern world, making her popular old-school imagery in neo-traditionalism.

Similar to that Medusa is a blend of both, her beauty is seductive and her touch destructive. Beautiful ladies have long been a popular option for male tattoo collectors, but neo-traditional tattoos are changing the business to allow for a more upscale degree of lavish charisma.

In this piece of art, the tattooist creates an illustrative and realistic version of Medusa using the ultimate neotraditional techniques that include a wide range of colour palettes, including shades of gold, black and red.

Each detail and bold outline is made to look sleek and glossy and luxuriant.

The tattoo is so vibrant and extravagant that it is almost hard to look away from it.

Neo-traditional tattoo art has found its inspiration from the Art Nouveau and the Art Deco movements which emerged when Japan had closed its gates to the rest of the world, seeing as this floating world wanted to preserve its culture.

However, when trading between Japan and Europe began, people were introduced to Japanese Art, setting up the European society for Art Nouveau. Globally, people were fascinated by Japanese artwork. Later on, Art Nouveau was replaced by Art Deco.

The striking image of the hooter is made with colours of greys, whites, reds and yellows. The black outlines are typical of neo-traditional tattoos along with the vibrant and conspicuous colours.

The glossy charm of the vintage rivet combines seductively with post-modern artwork. The overall result is a flawlessly elegant mix of self-assurance and playfulness, which is rather evident in this sweet little neo-traditional style of art, a simple yellow rose.

Did you know that other than friendship, yellow roses are also symbols of luck? If you didn′t, well now you do and now you′ve a reason to get this beautiful neo-traditional piece.

With its bright yellow and dark outline, it makes for a simple and sweet tattoo. The tattooist also incorporated a bird motif, further adding to the tattoo′s cuteness.

You can never have enough flower tattoos, and this is just the right one to add to your canvas if you are looking to tattoo a floral style tattoo.

Neotraditional techniques are ideal for rose and other such floral patterns seeing as they add a modern look to an old-school design.

How stunningly gorgeous does this neo-traditional piece of a wolf look? A wolf, in itself, is a very striking and viciously beautiful animal.

When you think of an American Traditional Tattoo, you are probably reminded of artworks that include such fierce and ferocious animals.

The same theme has become a part of neo-traditional tattoos, where animals like Wolves often make an appearance in loud, flamboyant tattoos.

Here, the tattooist created a vivid, colourful and flamboyant work of art. The fierce-looking wolf with a lantern clenched in its jaw provides an alpha aura.

Ideal for men and women who want their tattoos to represent strength, loyalty and authority.

The neo-traditional style, as opposed to the “new school” style, is a rebirth and appreciation of the traditional tattoo style, with a more in-depth colour palette and usage of more diversified imagery and has a thick dimension.

Images like skulls, eyes, flowers, owls, wolves and more are among the most popular neo-traditional tattoo designs.

Here, the tattooist has created, quite possibly one of the most vivid-looking skull tattoos. Perks of getting neo-traditional tattoos, including the dramatic and graphic style. The dense lines used to draw the outer frame of the tattoo and the bright red colour gives the tattoo an edgy and gothic.

Adding to the splendour of the tattoo is the black crescent moon passing through the skull′s eyes and the bright yellow tinkling of the star.

Hearts in neo-traditional tattoos are made of a brew of anatomy and pure romanticism. This may be a fantastic way to honour your emotional side and the interests you care about.

The vivid reds and somewhat textured appearance of neo-traditional tattoos make it ideal for heart tattoos.

The illustrative look of the human heart with flowers sprouting out of its arteries, it′s a splendorous piece of art. Artists often create such creative pieces to highlight the imaginative and illustrative aspects of a neo-traditional tattoo.

It′s modern, highly saturated colours, enchanting imagery and stunning splendour is a massive hit in the tattoo community and among tattoo artists.

The neo-traditional tattoo contains distinguishing features, but you′re likely to observe variations from one art piece to the next. And it′s because of this that people find the genre so intriguing.

To bring the tattoo ideas to life, a tattooist might experiment with the nature of the content, colours, and line weights. It′s also an opportunity to pay respect to legendary images that have a special value for you.

The neotraditional snake tattoos pay homage to the animal′s oldest depictions while modernizing them in a similar modern spirit.

Though, to many, the snake is a symbol of doom and death. But, The neo-traditional snake tattoo demonstrates that whatever is never readily embraced frequently produces the most memorable art.

In this piece, the tattooist created a vicious, ready-to-strike serpent, wrapped around a green dagger. The different colour palettes used to etch this stunning and vivid masterpiece includes greys, blacks, greens, reds and other lighter shades.

If you aren′t prejudiced towards this beautiful but ferocious creature, then getting a neo-traditional snake tattoo is a great choice.

Lastly, we have this small, sweet and aesthetic design of an eye inside a barbed-wire heart shape motif. It is dramatic, detailed and extravagant, with its illustrative eyes and teardrops, while the thick lines that make the barbed-wire heart are sleek and clear.

While it might not hold any deeper meaning, it might still be meaningful for the wearer and represent whatever it is that they intended the tattoo to represent.

The neo-traditional aspects including the vivid and realistic look will not fail to fetch you numerous compliments that you can′t bag enough of.

So, if you are looking for a neo-traditional art piece but nothing to elaborate then this small piece is just your style. Such symbols and patterns are rare in neo traditionalism but not unheard of.

It′s wonderful to get something that appears like it always did years ago, but other individuals prefer something a bit more personalized. Tattoos that are neo-traditional enable some rule-breaking.

This is also an opportunity to pay respect to legendary images that have a special value for you.  A Neo-traditional tattoo might borrow from more current symbolism, making it ideal for an old soul.