10 Best Ladder Tattoo Ideas That Will Blow Your Mind! 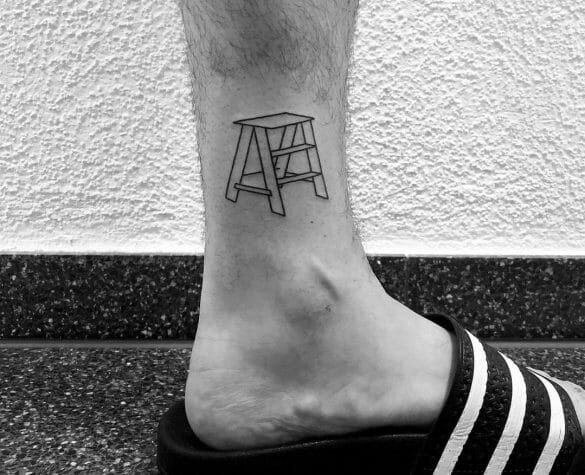 Are you tired of the predictable tattoo designs? Have a look at this incredible set of ladder tattoos, for some fresh inspiration!

The beauty of ladder tattoos is in the simplicity of presentation.

Ladders tattoos hold a deeper meaning. It is used to show someone who is climbing the ladder of life itself, to reach success.

There are various types of superstitions involved with the ladder of the real world itself. Originally forbidden because of health hazards, overtime, walking under ladders were considered to be really bad luck. While most of the world started believing in this, Egyptians took the ladder as a good symbol. It symbolised the journey from this world to Heaven for them. As tattoos, ladders typically have a positive sentiment.

This tattoo reminds us of more sitcoms than we can count with both our hands. The tattoo shows the fire escape of a typical apartment building. The practical and mundane side of life is captured in the tattoo as we can see a man on the top floor, smoking his cigarette leisurely. On the floor below, a big house plant can be seen, which makes us think about someone, aspiring to have better things in life, no matter their current situation. At the bottom, the ladder is present, from where they have been able to climb this far. The simple tattoo spreads over the length of the back, and is a fineline work, requiring great focus from the tattoo artist.

The source of inspiration for this design is psychedelic art. While the ladder tattoo otherwise is rather simple, with one little tweak, it has a cool element. The seemingly simple ladder, after a point, is expressed to be dripping down almost like paint. This is done, with the weight of something that looks like a ball. While the idea may not be realistic, that makes it even more interesting. Since the tattoo does not call for many details, you can expect to finish this piece in a single sitting if you can be patient.

Less is more seems to be the motto of this particular tattoo. With the help of shadows, a series of illusions are created, which demands one to look closer, and find each layer at a time. With shading, the illusion of stairs is created as the base of the tattoo. On top of it, a simple ladder is kept which forms shadow over the stairs, making the shape more prominent, creating a third layer of illusory stairs. The piece of abstract art may seem easy, but you will need to hunt one of the best tattoo artists to complete this piece with perfection.

Does this tattoo remind you of any song? The actual source for this tattoo’s inspiration is the man Mac Miller. Two of his famous numbers LADDERS and OBJECTS IN THE MIRROR find a visual representation here. Although, art is subjective, and this piece also reminds us of Jacob’s Ladder, pointing towards Heaven. With the halo in the picture, such symbolism is hard to ignore. The clouds and jewel-like raindrops with the planets in the background give this tattoo a dreamy effect. Since this tattoo is comparatively larger, this is suited as a coverup tattoo as well.

What sets this ladder tattoo apart from the rest, is the perspective. At one glance, the ladder is similar to the ones found in the playground. Although, when the entire picture is taken into consideration, we can see the sides of the walls of a swimming pool. We love the shadow effect created with a single ink. The sun rays fall on the left side, so the right wall is in darkness. It can be a reminder for the warm, sunny days. Another cool fact about this tattoo is that it is hand-poked completely.

Finally! We have more colours in the palette! The message expressed by this ladder tattoo is that of hope. Painting a picture of wonder through the skylight, the ladder tattoo is a reminder of a journey filled with happiness one must pursue. Vines, petals, leaves of so many colours are seen climbing down through the skylight. This cool design spreads over the arm. The ladder is accentuated with the help of the various other elements in the tattoo. The idea of the entire cosmic world is depicted through the tiny skylight.

To Climb In Or Climb Out Ladder Tattoo

Ever heard of surrealism? If you have turned the pages dealing with the art of the post-modern age, you certainly have. From the dozens of ladder tattoos present, this one certainly makes its mark with the thought-provoking image. Surrealism is all about invoking the higher consciousness, and that is exactly what this design does for us. A ladder is seen descending, or coming out, as you would like to think, from an enclosed space. A man is outside, contemplating. For us, such symbolism is applied to convey the meaning, that a person determines their fate with their choices.

Leave The Ladder Behind Tattoo

The inspiration for this cool ladder tattoo comes from a vintage photograph. This was originally clicked by Henri Cartier-Bresson. Since the tattoo is tiny, you can fit it anywhere, even as a ladder armband tattoo. The intricate details on this piece are focused on the ripples in the water and the ladder. Even the reflection of the person running can be spotted. What about picking your quirky ladder photograph for the next tattoo? This is a fun piece that can be completed in a few hours, as long as you know good tattoo artists.

We love this tattoo because of how relatable it is. The figure of a woman is shown, bent over a ladder. Only the hair can be soon, but her distraught feelings are conveyed well even without any facial expressions. It reminds us of those one and many blue days everybody has occasionally. Something surprising about this tattoo is that this did not ask for any machine. Even though it has distinct fine lines, the work is completed with the dedication of a hand poker.

Ladder As A Bridge Tattoo

Whether it should be two separate rooms or two separate spaces, we leave the deduction up to you. A long and simple ladder is placed between two spaces. The shadow falls on the surface, as though the light from the room creates that shadow. The ladder seems like a bridge, connecting two different places, with undiscovered possibilities. Even though the pattern is rather simple, the tattoo covers the length of the lower arm. To get the edges with the different levels of shading right, make sure you should trust yourself only with an experienced tattooist.

Surprised to see how creative a simple ladder tattoo design can get? By adding little twists, you can also create a custom piece just for yourself.

Before we shut this chapter, there are a few more interesting ladder tattoos that deserve a mention: