10 Best Grateful Dead Tattoo Ideas That Will Blow Your Mind! 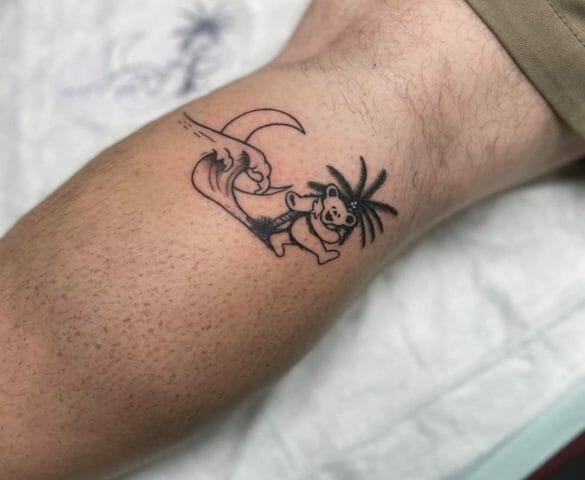 Consider this a call to all Deadheads to assemble, because we′ve gathered some of the coolest Grateful Dead Tattoos just for you to craze over.

In the 1960s, a budding rock band broke onto the scene known as the Grateful Dead.

They expertly incorporated a fusion of sounds from space rock to blues and psychedelia. There stardom and fan-following exploded and with it came die-hard fans who called themselves “Deadheads”

These die-hard Grateful Dead fans showcased their love for the band by being loyal and faithful fans. Some bought tee-shirts while others memorized lyrics from their music. Day after day their popularity grew and they were thriving in their prime-time.

After Jerry Garcia′s demise, the other members of the band disbanded. However, the Deadheads remained and they continue to thrive.

To pay homage to this legendary band and their music, loyal Deadheads continue to show their love for the men by getting Grateful Dead Tattoos.

These Grateful Dead Tattoos have become so popular that we′ve decide to scour the internet and find some of the coolest Grateful Dead tattoos for the ever-loyal Deadheads who continue to commemorate the legendary band and their quality work.

This stunning neo-traditional work is sure to tickle your fancy. The artist delicately recreated the famous album cover from the Grateful Dead.

The design itself is so stunning that it had to become a popular choice among many of the Grateful Dead tattoo ideas. The beautiful contrast of the black and red tones provide a tasteful look.

The placement choices are in abundance, ranging from the forearm to the chest and the back.

This Grateful Dead tattoo finds its inspiration from one of their famous music ever made, called the Dire Wolf.

Here, the artist created a quirky and fun and rather mischievous looking wolf commemorating the band′s music. The tattoo has been done in neo-traditional work and its vibrancy is sure to catch lots of attention and collect compliments,

A great opportunity for Deadheads to talk about all things Grateful Dead with their peers when they ask about such a fun little tattoo.

Deadheads choose to mark their love for the band in a unique way, by getting their album covers tattooed on them.

Granted these album covers are unconventionally aesthetic in their own rights.

Like the notorious and popular “Dancing Bear” tattoo. The artist created a replica on the inner bicep of the “History of the Grateful Dead, Volume One (Bear′s Choice)” album cover. This multicoloured bear makes for a pretty and vibrant tattoo, ideal for fans of the Grateful Dead.

The bears have been profoundly embedded in the culture around the Grateful Dead, taking on layers of metaphorical meaning throughout the years.

The famous lyrics “Mama, mama, many worlds I′ve come / Since I first left home” to Brokedown Palace makes for an ideal Grateful Dead tattoo and Deadheads are fawning over this beautiful design.

This time it′s a forearm work placed inside the lightning bolt that we famously find in the Grateful Dead band logo. The lyrics are in the midst of the lightning bolt and makes for a fun little design for fans of that particular song.

While the song in itself is famous in its own rights, fans of the band tend to appreciate the lyrics more than the music, seeing as many of them find resonance to the words. So if you are one of the Brokedown Palace or even Dire Wolf fans, then lyric tattoos like this one will definitely get your boat sailing.

No Grateful Dead tattoo collection is ever complete without a Jerry Garcia tattoo.

This animated little portrait is sure to pull at your heartstrings and we recommend you get his face tattooed so that you can pay homage to the fallen member and his cherished life.

It is a favourite choice for many Grateful Dead fans.

The bright yellow colour of the tattoo gives it a vibrant and fun look and we assure you that you′ll not regret getting it.

For the most daring Grateful Dead enthusiasts, the infamous ‘dancing bears’ remain a popular option as it continues to be one of the most iconic symbols of the Band.

The ‘deadbolt’ with a unique twist is presented in this quirky and aesthetically pleasing tattoo design from the Grateful Dead.

A symbol that references the logo of the Grateful Dead makes for a tasteful tattoo for Grateful Dead enthusiasts and we have brought you this floral designed version. The outline is created in the shape of a lightning bolt, the famous logo, while the insides are designed with flowers, rainbows, mountains and cute little mushrooms.

This beautiful skeleton tattoo is inspired by the Bertha Album Cover of the Grateful Dead.

We see a standing skeleton, and the artist created a realistic illusion that further enhances the beauty of the tattoo despite it being a simple design.

The artist used the Fineline method to create the artwork and the dark tone gives the tattoo a sketched look. The gothic aesthetic of the tattoo will surely appeal to many Grateful Dead fans and you men from all walks of life can note the gothic beauty this unconventional design presents.

Bertha- The Skeleton is having a great time riding a bicycle and we can′t get enough of how fun and hilarious this quirky tattoo looks.

If you are someone who enjoys tattoos that are eccentric and funky like this piece, then we assure you that this version of the skeleton will not disappoint you.

Here′s your chance to stop contemplating your next tattoo and face your fears. Because this cute little tattoo is totally worth it and so is the Grateful Dead.

The ‘Terrapin Turtles’ are one of the lesser-known but still cherished Grateful Dead emblems. The symbol, which first appeared on the cover of the 1977 album ‘Terrapin Station’, is reported to have been inspired by the words of the album’s title tune, the iconic live jam “Terrapin Station.”

The logo definitely makes for a cute tattoo design and does not fail to commemorate the legendary band.

Other than that, turtles hold a deeper meaning of their own and their symbolism can be considered separately in this version of the tattoo, together with the Grateful Dead reference.

One of the amazing things about the Grateful Dead was how their wide variety and distinct style drew admirers from many layers of society. There is a phrase or work of art that might symbolize something different to all of us.

It′s remarkable to witness the Grateful Deads presence and influence on American mainstream culture, both through their music and the tie-dye tinged art linked with it. The culture is still alive and well more than 25 years after the band′s final concert, and it looks set to continue.