101 Best Fire Tribal Tattoo Ideas That Will Blow Your Mind! 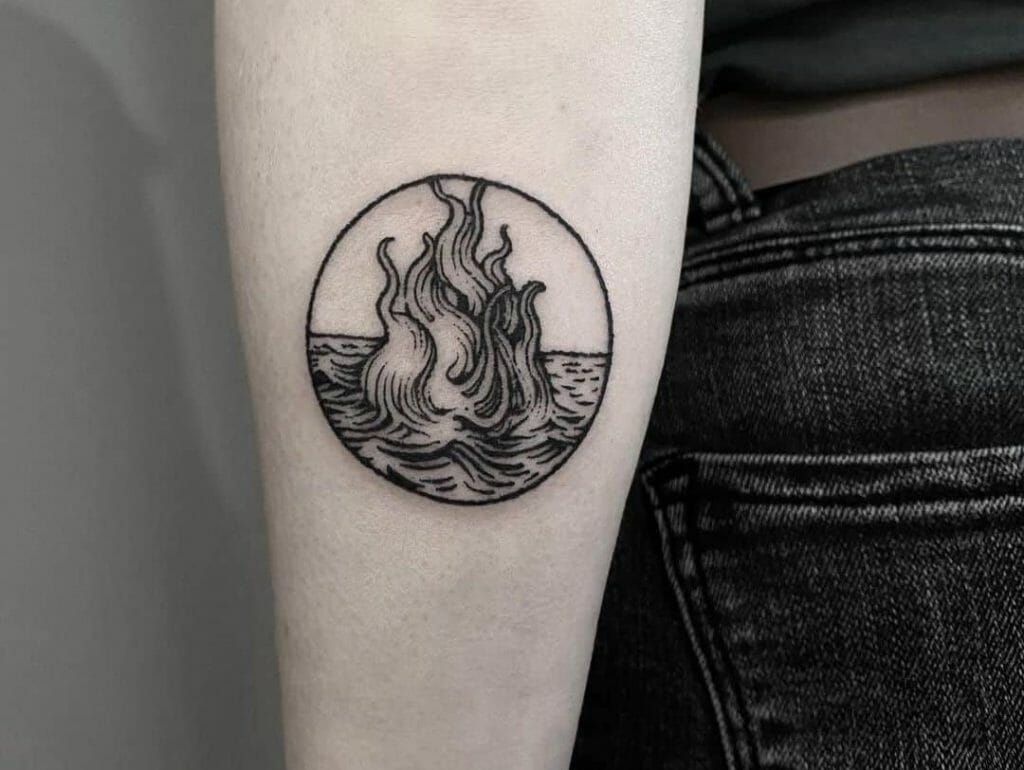 Do you love tribal tattoos and want to add fire to them? Then there are some amazing fire tribal tattoo ideas that you would love to have.

Fire tattoos have been around for centuries.

Fire tattoo ideas are quite versatile, and hence, tattoo artists use a ton of different styles to create flame tattoos. One such popular style is a fire tribal tattoo, which incorporates tribal elements and motifs.

In comparison to regular flame tattoos, tribal flames are much bolder in appearance and usually made fully black. However, contemporary tattoos artists are experimenting with fire tribal tattoo designs and creating motifs with vivid colours. There are also tribal fire tattoos that incorporate other meaningful symbols and elements. For instance, a tribal fire phoenix tattoo or a tribal fire dragon tattoo are both wonderful options if you want to display strong meanings on your skin. Additionally, when it comes to tribal flame tattoos, small to large, all shapes and sizes are equally attractive.

Continue reading to find more wonderful tribal fire tattoo designs and ideas that will surely make you fall in love with the fire sign!

People usually don’t get inked on their elbow and much less with a tribal fire sign. Hence, with a tattoo like this, you will definitely stand out in the crowd. As you can see, here, the sign of the tribal flames has been inked quite boldly and fully coloured in. This is quite a traditional tribal fire tattoo. Tribal flames are symbolic of a fiery personality, so this piece of art definitely justifies that.

If you love colours and want some vibrance on your skin, then this tribal fire tattoo is definitely the best option for you. Here, the tribal flames are inked with shades of red and dark purple. The gradient colouration makes the motif all the more attractive. Such a tribal flames tattoo can be inked anywhere on your body. You can also ask your tattoo artist to use two or three different shades to create this piece.

In comparison to the previous design, this tribal flames tattoo has a much more prominent gradient effect. Here, as you can see, three shades have been used that are seamlessly blending into each other. Creating such a tattoo requires significant expertise, so make sure to visit an experienced tattoo artist. If you want to flaunt this art at all times, then the side of your neck is a wonderful place to get inked with this design.

Horses are said to symbolize freedom and strength. Combining that with tribal flames only results in a strong and meaningful tattoo that will make you the centre of attention. Here, the tribal fire motifs are seemingly coming out of the horse’s body in a flawless manner. The horse seems to have its forelimbs raised up, which is further denoting the power of the tattoo. Additionally, the gradient colouration is quite spectacular.

A small flame tattoo can just be as great as a big one if done right. Here, a traditional tribal fire has been inked on the wrist. The shape and size of this tattoo make it perfect for the wrist area, as it seems to be fitting in that place. You can also opt to get this design in a horizontal direction so that it looks like a bracelet, making it a permanent accessory on your skin.

Red and yellow are the colours most often used to depict the fire sign. So, this tribal tattoo is getting quite a traditional vibe due to its colouration. However, the way the flames have been inked here gives it a modern twist. The black shading and bold outline around the fire sign are further enhancing the visual appeal of this tribal tattoo. Fire tattoo can be made unique, and this tribal fire is the perfect example of that.

It is no secret that tigers are one of the most powerful creatures to exist. So, tribal flames surrounding the head of a traditionally inked tiger can be used by you to bring out the fierceness and power inside you. Here, the tiger has quite an aggressive expression on its face, and so, the fire signs match perfectly to that. You can get such an elaborate piece inked on your chest or back as a sign of your own hidden power.

Chest tattoos will never go out of style, and hence, fire tribal tattoo designs for the chest will remain a hot favourite. Here, the monochromatic tribal fire tattoo has the perfect combination of black and grey shades. The tattoo covers the shoulder and is extended into the chest, making it quite elaborate and almost like an accessory. The best part about such a tattoo is, it can be easily hidden.

Dotwork tattoos are a sign of the artistic capabilities of the artist, as these tattoos take a lot of experience, patience, and, most importantly, an artistic vision. In this tribal fire tattoo, the flames have been created using tiny little dots. Interestingly, some of the dots are dark, while some are light. This creates the perfect balance and interplay of dark and light shades, which is further enhancing the beauty of this sign. Such a tattoo would look great on the arm or leg.

The skull sign is quite common. So, if you want to stand out with your skull sign, then the best idea would be to add tribal fire to it. Here, the skull has been designed using a traditional style, and the flames surround the skull. The colouration of the tattoo makes it look quite cool, which is the exact opposite of what a skull sign and a fire sign means. As pictured above, such a tattoo is great for the upper arm, as it requires a large canvas to be inked properly.

With all this information about tribal flame tattoos, you can easily pick an idea that suits your personality. When it comes to the fire sign, the versatility is endless. So, even with tribal flame tattoos, you can make different combinations, in terms of colours or symbols, to come up with a design that speaks to your heart. Check out the quick compilation given below-

What is the meaning of a fire tribal tattoo?

A fire tribal tattoo is a traditional design that symbolizes passion and power. The flames are often seen as representing strength, courage, and transformation. In some cultures, the fire element is associated with purification and divine illumination. Additionally, these tattoos may also represent creativity, protection from harm, or even a form of spiritual awakening. Every person has their own unique interpretation of what a fire tribal tattoo means to them. Ultimately, this type of tattoo is meant to bring light and warmth into one’s life.

How do I choose a design for my fire tribal tattoo?

When selecting a design for your fire tribal tattoo, it is important to consider the meaning and symbolism that you want to convey. Think about what kind of message or emotions you would like your tattoo to express. Some popular designs include flames in various shapes and sizes, as well as abstract art and images associated with fire. It can also be helpful to look at examples of fire tribal tattoos online and in tattoo magazines to get some ideas. Once you find a design that speaks to you, make sure to consult with an experienced tattoo artist before having it permanently inked onto your skin.

How much does a fire tribal tattoo cost?

The cost of a fire tribal tattoo will depend on several factors, such as the size and complexity of the design, the experience level of the artist, and where you get it done. Smaller tattoos typically range from $50 to $200, while larger designs can cost anywhere from $200 to $1000 or more. Prices also vary depending on where you get the tattoo and the type of ink used. It is always a good idea to do your research before deciding on an artist and shop, as well as to budget accordingly.