101 Best Fear None Tattoo Ideas You Have To See To Believe! 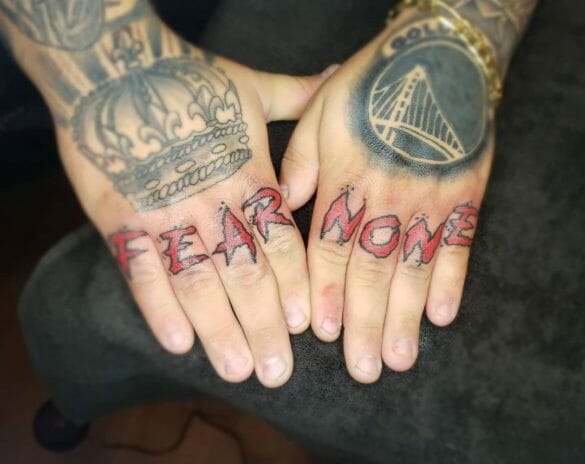 If you’re looking for a good ‘fear none’ tattoo idea, then read on, choose your favourite from the list and get the design inked.

Tattoos stay with us for a long period of time, if not forever.

People choose their tattoos based on a few things. Mainly it is either related to them, or it has a deep meaning or it may be trendy.

Fear tattoo ideas along with the ‘Fear none’ tattoos have become quite popular nowadays. It doesn’t have any complex meanings, like many other tattoo designs, but it can help you express your emotion just the same. People usually ink it as advice they follow in life that they don’t fear anyone or anything. They might also tattoo it to express that they are brave, courageous, and don’t fear unnecessary things. Read on to know the best ‘fear none’ tattoo designs.

Here we can see a colourful detailed tattoo of Jason Voorhees, a terrifying character from the horror movie series ‘Friday The 13th’ with the words ‘fear none’ written across it. Now, what says you fear nothing or no one, better than including a scene or horror movie character in your fear none tattoo? Horror movies are meant to make people afraid of what lurks in the shadows. If you win over that fear, then great many adventures await you. If you are already unafraid of them, then why not show it off to the world with a tattoo like the one above?

The picture above is of a ‘fear none respect all’ tattoo associated with a traditional dagger tattoo. American traditional tattoos of daggers are quite a common sight and as dagger tattoos are a sign of sacrifice, protection, and bravery, we say they go pretty well with ‘fear none’ tattoos. American traditional tattoos usually have bold lines and bold colours that have kept them popular throughout so many years. Among so many trendy styles of tattoos, people still choose this classic style for these can help you make a bold statement. You can also use other designs that express bravery the best way and incorporate the words ‘fear none’ in them.

Tyga Fear None But God Tattoo

The celebrity that the ‘fear none’ tattoo is mostly associated with is the renowned American rapper, Tyga. Tyga has more than 30 tattoos all across his body. One of them is the ‘fear none but god’ tattoo written in large letters across his upper chest. Tyga has some more tattoos related to God or Christianity. You can read a Bible verse on his right shoulder, an ‘only God can judge me’ tattoo and a tiny cross tattoo on the left of his neck, ‘God’s gift’ tattooed on his fingers, and more. All these tattoos along with his ‘fear none but God’ tattoo are a clear sign of his love and belief in God. You can show your love for God in the same way as Tyga by getting a tattoo like a picture above.

The ‘respect all, fear none’ tattoo came into existence from the words of a renowned American basketball coach, John Wooden. John Wooden once said, ‘respect every opponent, but fear none’. By these words he meant, if you have the right perspective and are prepared properly for the coming game, you will have respect for your opponent without a shred of fear for them. The tattoo ‘respect few, fear none’ like the picture above can be an interpretation of these words. However, ‘respect few, fear none’ is the motto of an outlaw motorcycle club ‘the Mongols’ based in California. The members who commit violence for the gang get this motto tattooed with a skull and crossbones.

Eminem is a renowned American rapper who has lived a fearless life even through endless struggles. His songs reflect that life. Especially, his song, ‘Not Afraid’ talks about how he is not afraid or bound by fear of things to do what he wants to do. He calls for others who are going through what he has and wishes to help them. Getting a tattoo of the lyrics of this song or just the title, like the picture above can help you express the notion ‘fear none’ just the same.

The tattoo ‘fear God’ is another interpretation of the tattoo, ‘fear none, but God’. It usually is a sign of the advice that live your life free of sins. You will be judged by the Almighty at the end of your life and if you don’t live a good life, you will be punished for your sins. The picture above shows a tattoo of heaven’s gate with the words ‘fear God’ written below it. It shows the faith the wearer has and that the wearer is living a straight, narrow, and good life as per God’s will.

The phrase ‘fear no evil’ comes from the Bible verse Psalm 23:4. It says that even in death, do not fear any evil. If you have faith in God, then God will be with you to protect you. The staff and rod of God will comfort you. You can get a word tattoo of ‘fear no evil’ with a touch of watercolour around to make it a little vibrant and give it a modern touch, like the picture above. You can also include a picture of God or elements related to God in your tattoo.

Can’t Fear Your Own World Tattoo

Bleach is a famous anime and manga series that first aired in 2004. ‘Can’t Fear Your Own World’ is a part of that manga series that was first released in 2017. This part of the series revolves around the protagonist Shūhei Hisagi. Shūhei Hisagi becomes a dark person when he’s fighting and inspires fear into his opponents. Hence, getting a Shūhei Hisagi tattoo, like the picture above can be perfect for your ‘fear none’ tattoo. In addition, bleach tattoos like these can help you socialize better with fellow bleach fans.

Hope that you have chosen your favourite design to ink. If you haven’t, we still have some more suggestions, like you can add mandala patterns to add a spiritual meaning. You can add geometric and tribal patterns to indicate some specific things. If you did something courageous in your life, you can also add an element associated with that event to your tattoo. Now get tattooing.

What does the Fear None tattoo mean?

The Fear None tattoo is a symbol of power and strength. It represents the ability to overcome any obstacle or challenge that comes your way. The tattoo can also be seen as a reminder to stay strong in the face of adversity.

What does a fear none tattoo mean?

A fear none tattoo can mean different things to different people. For some, it is a symbol of strength and power. It represents the ability to overcome any obstacle or challenge that comes your way. The tattoo can also be seen as a reminder to stay strong in the face of adversity.

How big is a fear none tattoo?

A fear none tattoo can be any size that you want it to be. It is typically seen as a small tattoo, but it can be larger if you desire.

How long does it take to get a fear none tattoo?

The time it takes to get a fear none tattoo depends on the size and complexity of the design. A small, simple tattoo can usually be done in one sitting. Larger, more complex designs may take multiple sessions.

What are some popular fear none tattoo designs?

Some popular fear none tattoo designs include skulls, snakes, daggers, and flames. These designs are often seen as symbols of power and strength.