10 Best Disturbed Tattoo Ideas That Will Blow Your Mind! 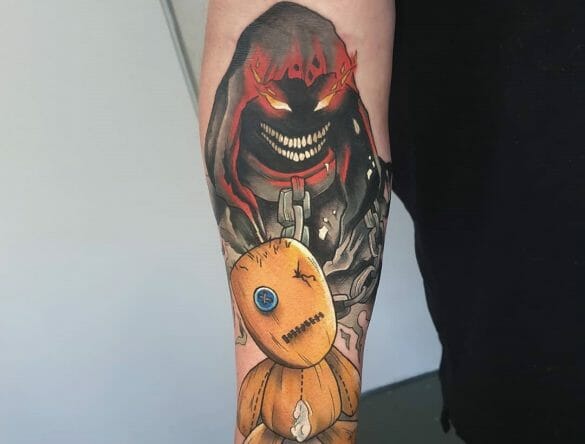 If you are a fan of the American heavy metal band, Disturbed and are looking to get a tattoo, you have come to the right place!

Disturbed, a heavy metal band from Chicago was formed in 1994 and has a large fan following.

The reason behind the band’s rise to fame was their album, “the sickness” that was released in 2000. They became so wildly popular that millions of people want their logo, mascot and even their song lyrics tattooed on themselves.

Disturbed currently has four members, Dan Donegan, Mike Wengren, David Draiman and John Moyer. Some heavy metal fans do not consider the songs by these artists as “traditional heavy metal”. However, Draiman once said that they do not quite as turbulent or caustic enough to be heavy metal, he described their songs as “classic metal”. Their inspiration was bands like Sabbath, Maiden, Metallica and Priest. He also mentioned that many lyrics from his songs are actually from his own real-life experiences. Maybe that is why the band is loved so much, it entertains us and we also learn something from it. If you love Disturbed and want to get a tattoo, we have curated a list of some wonderful Disturbed tattoo designs that will definitely catch your eye.

The logo of the band is very stylish and unique. The design of the logo is set differently because it is an eccentric blend of 4 different religious symbols, the Star of David, the Christian Cross, the Wicca, and the Islamic Crescent Moon. The sign promotes the idea of purity, anger and strength, qualities that can be seen in their music. It also promotes the idea of unity and belief in different religions. We have a lot to learn from them. Many fans also like to get this tattooed on themselves because of the meaning behind it. The Disturbed logo tattoo can be a design that you could consider for your next tattoo!

This is the tattoo of Disturbed’s mascot, “The Guy”. This is the original version of the tattoo which is hollow eyes and a creepy smile with big teeth. This tattoo is a little different from the original black and white because it has a splash of colours around it. The Disturbed guy tattoo is very cool, especially with the shoulder placement. This could make a great tattoo!

This makes for a great tattoo. It is the sign of DNA that was on the cover of Disturbed’s latest album, Evolution, which was released in 2018. This album became one of the band’s record-breaking albums. This album was made by the artists as a tribute to Chester Bennington of Linkin Park Vinnie Paul of Pantera, their friends who passed. The tattoo with the DNA sign and some combinations of blue is a great way to show your own appreciation for the band and its members!

“I’ll be your reason to fight” great words by artists from the band in their song, “A reason to fight” from their recent album, “Evolution”. There is something to learn from this song, that is never give up and that there will always be a reason to fight. You could always consider something special like this for your tattoo!

The beautiful words, “Don’t let hope become a memory” are from a song called “The Light” that was part of an album, Immortalized, by the artists that were released in 2015. This specific song by the artists was noted by a lot of critics for its meaningful and uplifting lyrics. It motivates them to tattoo it and keep reminding them of the positives in life. Always a lot to learn from this beloved band!

Another tattoo design of the sign promotes unity. You must have seen a similar design on the top. It is the logo of Disturbed that was used by the artists for some time. This sign featured on the cover of their album “Believed”. This tattoo is more simple with clean strokes and the word “unity” written below it. This is a great Disturbed believe tattoo to consider as your next design!

A later version of The Guy. This is more modified than the original mascot the artists had for their band. The original sign was edited by using a digital distorting program. After it was distorted about 3 times, it officially became the mascot of the band. The Guy has chains on his hands and is covered in a hood. He is the embodiment of the archangel, the destroyer. This tattoo is much more detailed than the original one. Each stroke is very intricate. This can be a bold tattoo, but a great one!

This is another tattoo that runs along the lines of the mascot of the band. Apart from the Disturbed believe symbol tattoo, this is the most sort after tattoo. It is a very cool and bold tattoo. This new mascot with a hooded head and chains on his hands featured on several album covers like Ten thousand fists, indestructible and asylum. A great choice to consider for a tattoo!

The words “sometimes darkness can show you the light” can be something that you resonate with on a daily basis. It could be a sign and reminder that no matter what happens, you will always have something to look forward to. This quote is from the wildly famous song, The Light.

This is an incredible dedication by a superfan of the band. This is the image of David Draiman who is the lead vocalist of the band. There are other artists from the band that have great fan following, but this one exceeds all. This shows true dedication. The tattoo is a bold move but shows your true love for the band and their wonderful songs.

The band and the artists are widely loved by fans from across the world. Their songs are not only catchy, but they give you hope and you always learn something from them. Their songs are signs of positivity, love and light in your life. If you are a true fan, getting a tattoo could be a great way of showing it!

Othe Distubed Tattoo that you can go for: