10 Best Ben Franklin Tattoo Ideas That Will Blow Your Mind! 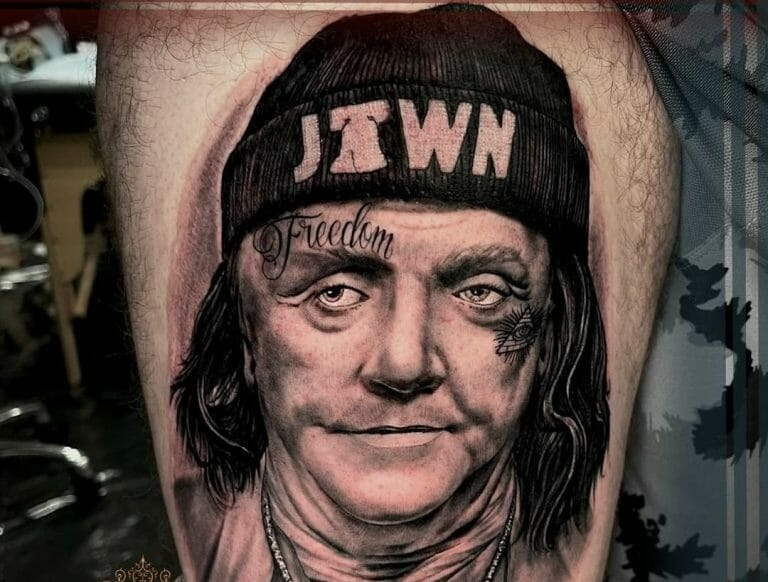 If you are looking for a tattoo that has both patriotic and historical values, then this list of Benjamin Franklin tattoos are definitely for you.

People have opted for tattoos featuring national flags, military emblems, historically significant dates, or other symbols relevant to their nations. If you are a patriotic American or a history buff in general, then these tattoos of Benjamin Franklin, one of the founding fathers of America, will certainly be appealing to you.

Born on January 17, 1706, in Boston, Benjamin Franklin was an American revolutionary, philanthropist, politician, scientist, and businessman. He was the first to prove that lightning was electricity by flying a kite and even developed a club to restrict it from hitting buildings. He proposed and developed theories on the contagiousness of the common cold disease, charted the Gulf Stream, invented bifocal glasses and a clean-burning stove. He was also a well-known philanthropist who went from organising block watches and raising funds to clean the roads of Philadelphia to building the University of Pennsylvania for middle-class children and providing welfare for widows and opposing slavery. However, Benjamin Franklin is best known as one of the founding fathers of America whose signature is found on all the 3 documents that freed America from England – the American Constitution, the Treaty of Paris, and the Declaration of Independence.

While getting inked, we always try to find a unique tattoo design that makes us stand apart in a crowd. If you’re one such individual looking for unusual and bizarre tattoo ideas, we recommend you these Ben Franklin gangster tattoo designs. Imagine one of our founding fathers in a skull cap, gold chains and face tattoos, and you will hit upon one of the most fantastic and distinguished tattoos you have ever come across. The indifferent look on the face of Benjamin Franklin combined with the subtle detailing by the tattoo artist make this tattoo a very cool one.

What happens when we combine possibly the most famous villain of popular culture of all time with one of the greatest men to ever live? We get this Joker themed Benjamin Franklin tattoo that is too deliciously evil to not choose. The quintessential Joker smile drawn on the lips of Benjamin Franklin is surely some stuff of nightmares as the face on hundred dollar bills almost stare at us to mumble – “Why so serious?”

While those getting inked for the first time opt for simple and minimal tattoo designs, seasonal tattoo enthusiasts want elaborate and large designs for showing off. This stylish Benjamin Franklin leg sleeve tattoo will serve that purpose and more with its delicate detailing and extensive shading that will surely prove a huge success within the tattoo community.

For goth fans, even a patriotic tattoo design is perfect with a dark, gothic twist! And if you’re seeking such tattoos, then this Ben Franklin skull tattoo is the answer. The brownish tinge coupled with extensive shading lends a certain eerie feel to the tattoo that is ideal for designs such as these. The wad of hundred dollar bills worn around the neck like a necklace adds a certain charm to the tattoo.

Benjamin Franklin enjoys immense popularity as a historical figure and, like most other classical figurines of the past, has a number of conspiracy theories attached with his persona. One such is that he was part of a secretive clan called the Illuminati and this tattoo explores that aspect by adding a third eye on his forehead. The use of grey dots to bring out the details gives the tattoo more mystical and realistic in appearance.

Owing to his face on all hundred dollar notes, Benjamin Franklin has become synonymous with wealth and money. This tattoo combines Franklin with a number of gambling props such as dice and cards to make it apt for the occasional gamblers to get inked with.

Even as we have now a wider range of colour palettes to choose from, the classical tattoo ink colours of white and black have never lost their appeal. This grayscale Benjamin Franklin tattoo with its extensive shading and a fine eye for detail makes a case for that. The white crosses on Franklin’s eyes add a certain mysterious appeal to the tattoo.

Benjamin Franklin has always been a symbol of patriotism and nationalist values. This tattoo takes the patriotism a few notches higher by coupling the founding father with an American flag. The subtle use of colours and the lacklustre finishing adds a rustic tone to the tattoo design which makes it more appealing.

So how much does a Benjamin Franklin tattoo cost? As is the case with other tattoos, the size and complexness of the design determine the cost of these types of tattoos along with the different tattoo ink colours used and the experience of the tattoo artist. Since most of the Benjamin Franklin tattoos are large in size and complex in design, they might cost a little more than other designs but the end result is worth it. As always, go for an experienced and professional tattoo artist to save yourself from future skin complexities and for the best results. Happy inking!