10 Best Baby Wolf Tattoo Ideas That Will Blow Your Mind! 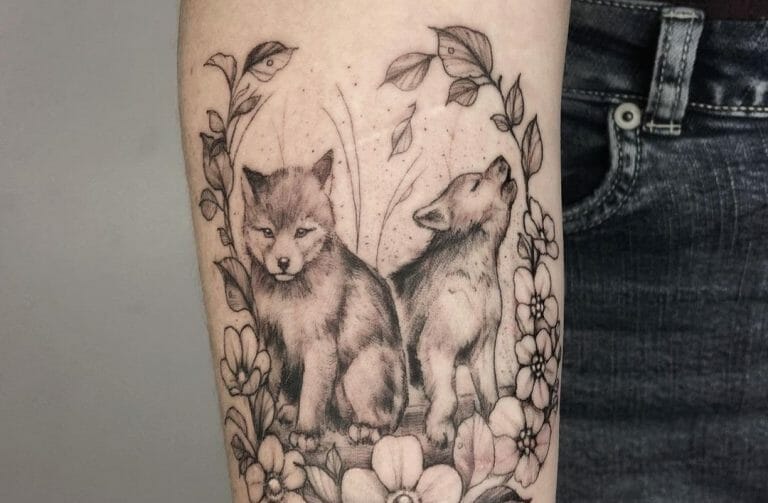 If you are in love with wolf cubs and find them really adorable but also can be a symbol of strength, then here are some baby wolf tattoo suggestions.

Wolves are hands down one of the strongest in the entire animal kingdom.

Wolf from the family of Canidae is the largest group of animals out of which came out other species such as dogs as some researchers say. They can be really intimidating if you judge by their outer appearance but one cannot deny the cuteness of the wolf babies.

Wolf represents and symbolizes strength, spiritual protection, power, loyalty, and so do wolf tattoos. In some cultures, wolves are held in higher positions. According to Shinto beliefs, the Okami that is the wolves are shinto gods and are said to be the messengers of kami spirits and also believed to be prophetic creatures. They are really cool creatures and bright forth a lot of symbolism. Baby wolves can be quite of opposite of that but at the same time has the same qualities as it grows up to be one of the strongest animals. So getting a baby wolf inks could mean a lot of things. It can be a symbol of the owner’s growth but also could be used as a symbol to represent your loved little ones at home who will one day grow up to become a loyal and strong entity able to protect themselves. So if you are in search of baby wolf ink ideas, we present to you a list of beautiful and cute wolf baby design inspirations.

This tattoo with two little baby wolves with gorgeous flowers around them is probably the most appealing thing you have seen today. It is an amazing tattoo idea for especially those who have two little ones at home. It could be used as a symbol to dedicate your love for them. On the other hand, this design could also mean two different sides of a person who still taking their time to grow whether as a better human being or a spiritually and physically strong being. Hence in that case the flowers could represent the fact that you are glooming.

A wolf hand tattoo that could be used for a father/son design as well as mother/daughter design and wise-versa in whichever way you would love to interpret it. But the central idea of the tattoo is basically the protection of a parent is like the protection of a wolf, hence could be used to represent your protective spirit for your child. This tattoo would be a perfect idea for those who are searching for sleeve forearm tattoos. So if this is your favourite then take inspiration from this tattoo, create your own similar one and get it inked.

The baby wolf reflection tattoo was probably made to create to symbolise the old self-reflecting about their younger self. It could also stand for the past and the future in a tattoo. Your interpretations decide the meaning. All the details like the shading of the water, the scenery painted in the background and everything else add to the essence of the tattoo. The shading technique is skillful and needs a lot of effort. This would also be a perfect wrist sleeve tattoo, if you are searching for one.

Similar to the previous one, this tattoo has similar symbolisms depending on your interpretations but is a bit different in terms of techniques and style. It even has a different nature background with mountains, etc. The shading technique is leaning more towards the darker tones and the details are filled with the black ink, while the style has a bit of a geometric effect. The tattoo reflects the amazing skills of the tattoo artist. So if you do opt for this one, make sure to find a capable artist.

This wolf baby tattoo is quite different from the other tattoos on the list due to its colour tones. Although the black ink is iconic, these colour tones break the monotonousness of it. The rope all over it could be a simple tattoo meaning that is it playing with it. On the other hand, could be used as a symbol of probably your conscience holding your qualities back, but its looseness could also mean you are slowly breaking out of shackles of life. If you find yourself relating to the tattoo, then this could be the one for you.

Another tattoo idea that could be used as a sleeve tattoo, but depending on your choices it could go any part of your body. This beautiful and intricate design could mean a baby learning from the adults of the pack which is quite similar to human nature. It is quite a simple tattoo with simple meanings. The howling portrays the free spiritedness, strength, or a connection to the wildness. If you believe you have all these characteristics, then this cubs tattoo might be a match for you.

This simple wolf tattoo is cute and minimalistic. You could simply get it to show your love for your child or your pet dog or your past self. The shadings on some parts like on the tip of the noes or on the tip of the paws and more add to a cutesy vibe. The tattoo would also look very cool with colours or personal details to the tattoo. So do not hesitate and make it unique.

A very vibrant design of a baby wolf with blue eyes and coloured jewels and flowers looks fun. The drawing and the colouring technique highlight the wolf’s features especially the fur. The tattoo once again could simply symbolise strength, power and royalty or the growth or your past self or anything you want it to mean. The jewels add to royalty-like vibe. This cute design could be assumed as a gray wolf baby and is very pretty. Add your own style of jewels, colours, and your favourite flowers to the tattoo.

This gorgeous geometric Wolf tattoo design is absolutely one of a kind and most definitely could be used by parents. The older wolf as the parent and two baby wolves as their kids. The roman numbers in the tattoo could be assumed as the birth dates of the children or could be turned into that. The amazing geometric designs surrounding the tattoo as well as the sun and moon make it oddly satisfying and very aesthetic. So if you are into geometric wolf design, this might be right up your alley.

Tattoo Of Baby Wolf With A Moon

This tattoo of a baby wolf over a beautiful scenery inside a half diamond with three moons from different phases on top of that as well as the other details make it a perfect artistic geometrical tattoo design. What makes it so beautiful and distinctive is the blue wolf eyes being the only coloured part of the tattoo. So if this is your kind of aesthetics then you should really go for it.

Wolf tattoos are one of the animal tattoos that have been in the trend lately. So don’t fall back if you love wolf tattoos. If you do choose a design from the list, do not forget to add your sparks, decide the placements and get it inked.

More suggestions for baby wolf Tattoo designs for you: