101 Best Anaglyph Tattoo Ideas That Will Blow Your Mind! 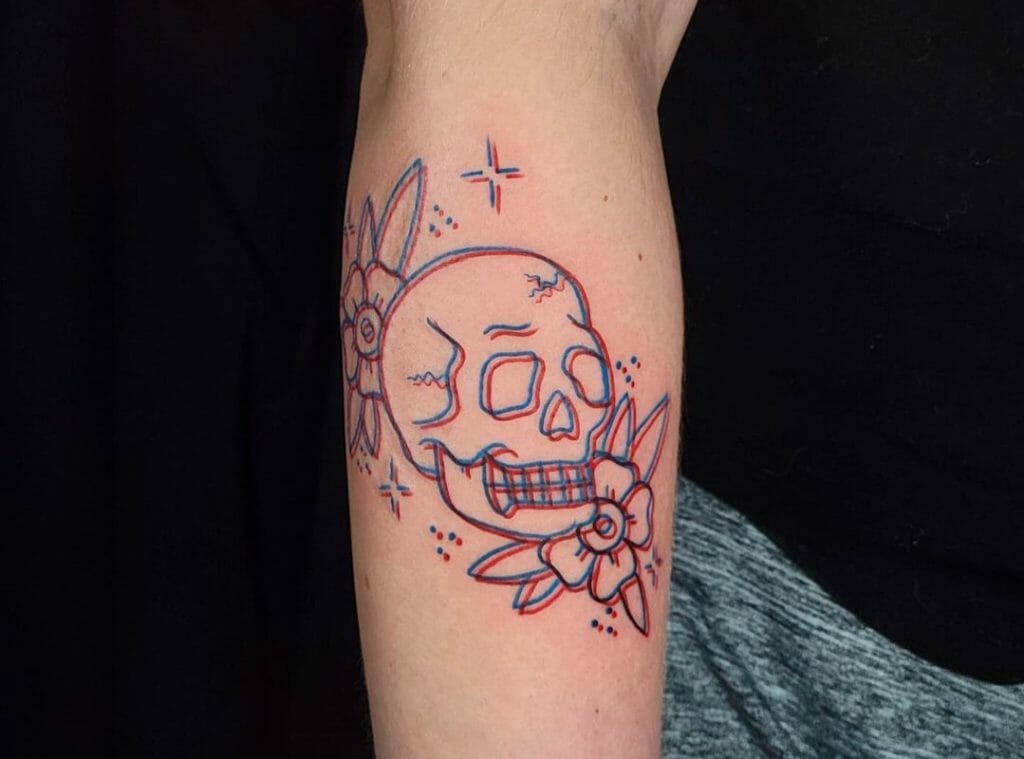 Are you looking for a trippy, three-dimensional looking illusionary tattoos? Then here are some amazing Anaglyph Tattoos for you to check out!

Each of the pictures from the different angles are printed in two different colours – mostly cyan and red, which are then superimposed on top of each other. When the anaglyph is viewed from the lenses of different colours, the images have a three-dimensional or 3D style due to the depth effect.

The anaglyph is often used as a fun, optical illusion that helps people perceive an object on a paper in 3D view. This mechanism was also used for a while in movie halls where people were given 3D glasses with each lens being coloured either red or cyan.

If you are someone who likes to experiment with their tattoos, then you can also check out anaglyph tattoos which are quite popular for their uniqueness. While the actual optical phenomenon of an anaglyph may not work out that well on your skin because of several factors like the skin tone and contour – you can still end up with a really cool tattoo with both red and cyan outlines!

If you are getting a tattoo for the first time, then you should start out with smaller tattoos to gain experience. If you are sure you want an anaglyph tattoo, then you can look at the various 3D tattoos on the internet and even ask your tattoo artist to show you some great 3D tattoos to choose from. From those, you can select the tattoo which you feel will be the best for you.

On the other hand, if you have a minimal or simple sense of aesthetic and like smaller tattoos, then you can also ask your tattoo artist to create a tiny but adorable anaglyph tattoo of a UFO or stars and the crescent moon as seen in the 3D tattoos above.

Skeleton or skull 3D tattoos are quite popular among all designs for anaglyph 3D tattoos. If you want tattoos that are fun, bizarre and eye-catching, you can get 3D tattoos of a skull or a full skeleton.

You can also get anaglyph 3D tattoos with an animal or a bird. As seen in the picture, the tattoo artist has created an exceptionally cute cat anaglyph 3D tattoo which would look like two images but is actually the same cat with red and blue borders. Thus, if you have a pet cat or dog you love a lot, you can get a tattoo of them following this style.

Floral motifs are always a popular tattoo design regardless of which style of tattoos you want. Similarly, for 3D tattoos as well, many people prefer to get tattoos of a rose or daisy done in blue and red colour.

If you want some more inspiration regarding floral 3D tattoos, you should check out these amazing Blue Rose Tattoo Ideas.

A lot of anaglyph 3D tattoos can also be incredibly detailed and intricate. If you want a similarly complex anaglyph tattoo, then you should do your research about the tattoo artists near you and which tattoo artists are proficient in tattooing such complex designs. These 3D tattoos might take a lot of time to complete and may also cost a lot because they use colourful ink. However, they will definitely look stunning once it is complete.

Anaglyph images are known to create a sense of colour overlap along with an optical illusion. The anaglyph image effective makes it feel as if a person is seeing two images instead of the same image drawn in blue and red coloured outlines. Therefore, you can also play around with the concept and ask your tattoo artist to create a tattoo like the one in the picture above where the smiley face is turning into a sad face.

If you want a tattoo that everyone will know about, then you can also choose your tattoo design based on a TV show or movie that you like a lot. In the picture above, the wearer has gotten an anaglyph tattoo of Lisa Simpson from the hit animated comedy show ‘The Simpsons’. Similarly, if you want tattoos with three dimensions, you can choose the TV show or movie you want and get a cool popular culture tattoo with three dimensions.

For more fun ideas for 3D tattoos, check out these awesome Futurama Tattoo Ideas for more 3D tattoos based on funny, animated shows.

The anaglyph of Nirvana logo is probably one of the most iconic images in popular culture around the world. The face of a human head smiling with its tongue out has inspired many musicians and fans. Consequently, if you are a huge fan of the band Nirvana and want to pay them a fitting tribute, you can get this amazing Nirvana logo anaglyph tattoo to honour them for the rest of your life.

You can also use the anaglyph tattooing technique for any other form of art or musician who has inspired you. If the music of David Bowie has given you hope in life, then you can also take the immensely famous Ziggy Stardust symbol and convert it into an anaglyph tattoo. This will also look amazing from afar as it will give off an electric effect that Bowie personified on stage.

A lot of people prefer to put their 3 D tattoos on their arm in order to ensure maximum visibility for the amazing tattoo. As can be seen in the picture, the tattoo wearer has gotten the anaglyph tattoo of a pair of ropes done in red and blue on their arm that is offset against their skin. The red and cyan colours easily pop up on the skin and look bright and vivid even from a distance.

Anaglyph Tattoo Designs That Are Easy To Place Anywhere

A person might be worried and confused about where to put their 3D anaglyph tattoo, however these 3D tattoo designs are really easy to place anywhere on your body as you like. As seen in the picture, you can place them on your ribs on the side of your body. You can also place them on your thigh or near your ankle if you want a red and blue 3D tattoo on your leg.

An anaglyph image has always attracted people who are interested in optical physics or in visual illusions. If you are someone who wants to get a completely different tattoo that will be eye-catching, you should definitely go ahead and get an anaglyph 3D tattoo!