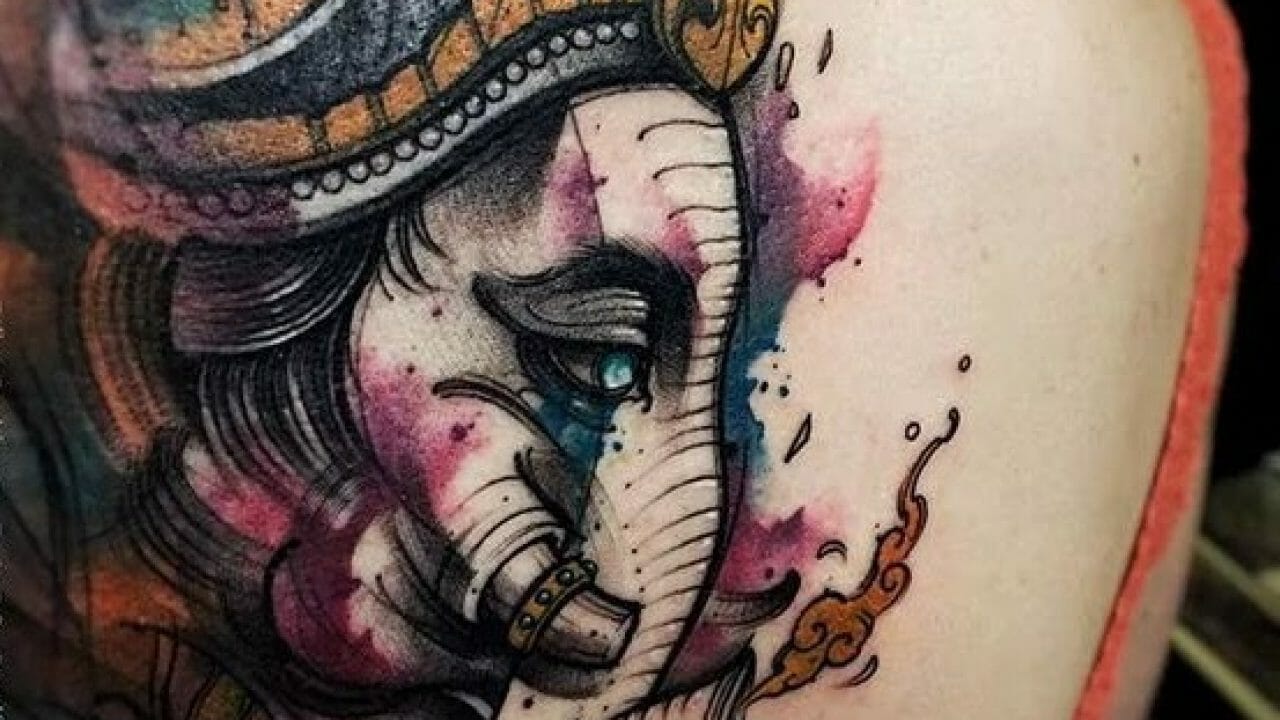 The Pantheon in Hinduism is complex and beautiful for firstcomers to the religion! With so many deities and stories to explore, it is a sea of inspiration for art! If you’re a proud Hindu or want to pay respect to the religion, what better way than to search for stunning Indian God tattoo designs? If the Ganesha tattoo is what you’re looking for, check out our list of top 11 tattoos of Ganesh for inspiration down below!

What does the Ganesha symbolize?

Ganesha or Ganesh is one of the most popular and worshiped gods in Hinduism! His looks have changed over time, but the iconic elephant head with one broken tooth is instantly recognizable! Ganesha is regarded as the Hindu deity that removes obstacles. He is also the patron of arts and sciences and the deity of intellect and wisdom. Talk about a multi-talented Deva! Ganesha tattoo meaning is related to starting something new. So why not honor that and tattoo Ganesh on your body?

Is Ganesha a boy or a girl?

If you’re interested in the gender of the elephant Hindu God, Ganesha is considered to be male. Ganesh is the son of Shiva and Parvati. The biggest question is whether he is single, married and who his children are! Some scholars say Ganesha is associated with the Goddess of Culture and Arts, while others with Lakshmi – Goddess of luck and prosperity!

Looking to tattoo Ganesha, the Hindu Elephant Deity? You’re doing the right first step by checking out our article! And speaking of first steps, a Ganesha or Ganpati tattoo symbolizes new beginnings. This black and white Ganesha head tattoo will suit anyone into the spiritual aspect of India! Get it done on your forearm or chest! And don’t forget to ask for white ink on those jewelry highlights!

Om is a sacred sound and symbol in not just Hinduism! You’ve probably seen it as a standalone tattoo once or twice! Why not combine it with mind blowingly beautiful images of Ganesh? This Ganesha tattoo is insanely realistic! Add a touch of color with jewelry and the red om symbol! Such an amazingly shaded Ganesha tattoo drawing deserves a sleeve placement!

Have you ever seen a more godly tattoo than this Lord Ganesha tattoo? For those devoted to Ganesha and Hinduism, enduring such a large tattoo design is a piece of cake! Devote your entire back to this God Ganesh tattoo! All the insane details in this image are easily distinguishable, even if it’s all black ink. Immortalize the beginning of a new chapter in your life with this breathtaking Ganesha tattoo design! But be warned, this tattoo experience will hurt!

Hamsa or Hand of Gods tattoos were quite popular back in the day! So don’t let the trend die out just yet! They bring the wearer everything positive – good luck, wealth, happiness and all! If that sounds like a tattoo design you want to get, check out this Hamsa and Ganesh image! This ornamental and detailed tattoo design needs no color other than black. So bring some positivity, with wisdom on the side and get this awesome Ganesh hand tattoo!

Searching for tattoo designs to bring you prosperity, wisdom and remove any obstacles in your life? We’re glad to inform you the search is over. You just found it! Get a full body image of the Hindu deity Ganesh done on your arm or leg. Hindu tattoo ideas always have incredible details and involve jewelry. If that sounds right up your alley, get this Ganesha tattoo! Waiting for this inkwork to be completed is definitely worth it!

Thinking of getting a tattoo to wash away your struggles and obstacles in life? Then get this Ganesh elephant tattoo on your hand! Easily recognizable by the trunk and one broken tusk, Ganesh is revered as the deity who removes obstacles. Excellent shading with just black ink makes the skin look so realistic!

A Ganesha elephant tattoo meaning is one of new beginnings. If you’re in need of new tattoo ideas, we have just the thing! Check out this amazing sleeve Ganesha face tattoo! This Ganesh image really does deserve a sleeve! Add a pop of red color to the jewel on top and in some ornaments. And check out those beautiful eyes piercing your soul! Turn a leaf and start anew in your life with this alluring Ganesh tattoo!

Want to honor your roots and humble beginnings? Get this simple Ganesha tattoo! Ideal for neck or wrist placement, this black ink tattoo might save you a couple of dollars! The Ganesh image is stylized with calligraphy-like strokes, yet you can still see it’s the Hindu God Ganesh! This Ganesh tattoo design is inspired by the traditional calligraphy of India. Add a subtle Sanskrit name to elevate this Ganesha tattoo image!

While Ganesh is traditionally portrayed as male, you can’t say this genderbent design isn’t pretty as a picture! This Ganesha tattoo artist did an amazing job with feminine features and details. Your eye immediately goes to all the details in the headpiece! Ganesh images often have a lotus flower in them. In Hinduism, a lotus flower is regarded as a symbol of divine perfection. We believe you possess that level of beauty and should get this Ganapati tattoo!

Simple Ganesh tattoos are charming done just in black and gray. However a popular option is adding a pop of color to your Ganesh tattoos designs! Light blue is the ideal color no matter what your skin tone is! Traditional ornamental designs like this tattoo work great for any placement, but we suggest getting it on your bicep or hip!

We hope you enjoyed our list of top 11 tattoos of Ganesha! Whether you’re a Hindu yourself, or you’re in love with the culture, get inspired by our tattoo design choices! It’s easy to search for Ganesh images, but hard to pick a single design! Get a colorless Ganesha tattoo on hand or a Ganesha tattoo color anywhere you wish. It’s always your choice!