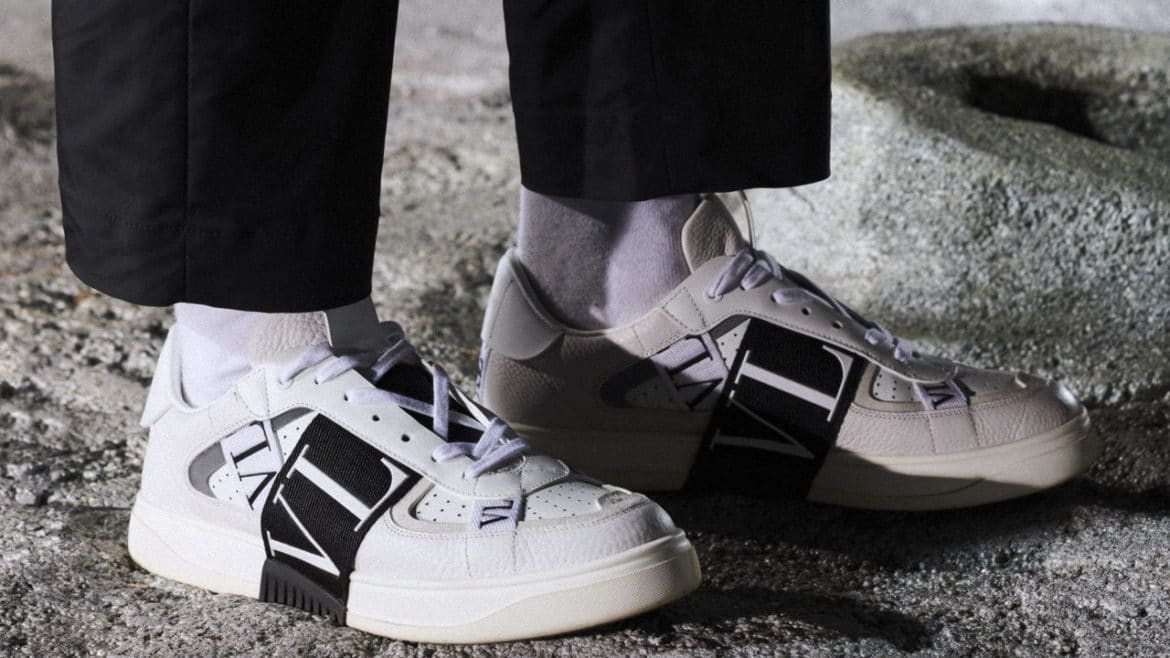 With the unprecedented rise of trainers as an acceptable footwear choice in almost any setting, the range of choices available to us can be a little overwhelming. We’ve therefore put together a complete guide on the best summer trainers for men.

The days are getting longer, the temperature’s rising and the rain showers are becoming less frequent (kind of). This can only mean one thing, the great British summer is soon to be upon us. Now is the perfect time to make an upgrade in the footwear department, and as the saying goes: there’s an awful lot you can tell about a person by their shoes.

In the last couple of years, trainers have been well and truly thrust into the mainstream. Trainers are no longer the preserve of the teenage boys; they are for everyone. A good trainer can tread the line of style and comfort unlike any other piece of footwear. Trainers are now widely accepted in most aspects of life, even the workplace and on nights out.

The Best White Trainers for Men

This year is without a doubt the year of the fresh white trainer, it’s clean-cut and has a fresh summer look to it. You can also choose a style that suits you and your wardrobe, so if you like chunky trainers or dad trainers, you’ll be able to find a pair that suits you. Because you’re going for such a neutral color, your trainers can be paired with an array of outfits and color combinations. Smart or casual, if your trainers are well kept, you’ll have got that smart casual look.

At the luxury end of the market, there’s the likes of the white Prada’s trainers – a selection of neutrally colored trainers for the sartorially aspirational man. Or our other top picks from the high-end trainer manufacturers come from new start-ups Filling Pieces and industry trailblazers Common Projects.

The Best Sports Trainers for Men

A combination of some high-tech training shoe technology and sleek design makes trainers in today’s society a lot more than what they used to be. The new generation of running shoes has risen above a simple tool to aid athletic performance. At their very best, this new breed of athletic shoe serves also as a fashion mainstay.

High-end performance sports trainers fused with a slick aesthetic are here to stay, and the market is awash with beautiful shoes that benefit from their high functionality and comfort – the best of both worlds.

The other beauty of sports shoes fighting their corner in the fashion market is that they’re built to stay cool and are therefore perfect for dealing with the best the British summer has to offer. The big players in this part of the trainer market are always looking to push the technology forward. This year’s highest-profile designs use new breathable and lightweight fabrics, so trainers now have the most comfortable soles ever, like the Adidas boost and Nike Lunar.

As we discussed earlier, cool trainers are now no longer the sole preserve of teenagers – they are for everyone. So as logic would dictate, fashion houses on every part of the scale have started to dip their toes into the trainer market. Trainers are now a suitable choice for most occasions and so it makes sense that the trainer industry is being infiltrated by the fashion industry.

As part of the move towards collaborations, fashion labels and high-end designers have had their fingers in the pie that is the trainer market for many years now. However, the direction of the wind is changing, and not only are the designers and labels working with the well-established trainer makers, but they are now also creating their own.

Some of the best men’s trainers on the market this summer include the likes of Sandro’s High Tops and Maison Martin Margiela’s Replica inspired by the German Army trainer. The beauty of the rise of the luxury fashion trainer is that you are guaranteed quality for your money, the fashion houses often sparing no expense when it comes to the materials used to create their versions of the footwear staple.

There is no question that while the quality of the luxury labels is second to none, sometimes the price means these shoes are out of range for the average Joe. But never fear, as the more traditional sports trainer companies and high street retailers are responding to the popularity of the luxury trainer and alternatives to the richer of the fashion trainers are becoming more widely available.

Of particular note for those of you who don’t want to blow the whole of your summer holiday savings on a pair of trainers, the Adidas Tubular is a favorite of ours. While most high street retailers are producing viable alternatives to the pricier end of the market, you are sure to get a stylish pair of trainers no matter your budget.

The Best Classic Trainers for Men

The classic trainers are called classic for a reason – some trainer designs simply have an aesthetic which has had the ability to withstand the test of time and fight off all the other latecomers to the party.

There’s a good reason for the coolest trainers standing strong after years or even decades, in what is an extremely crowded market. This is because they are often design masterpieces. As well as trainers that haven’t gone away over the years, there is also a recent trend for the big trainer manufacturers to reissue old designs. A recent spate of these has arguably been instigated by the success of Nike’s reintroduction of the Cortez.

Others to keep a keen eye on in this vein are the likes of Adidas’s Stan Smith and the Converse Chuck Taylor. The Chuck Taylor actually featured their first redesign in around 100 years last year and the iconic trainer is now more comfortable than ever, as well as holding on to its sacred status in the trainer world. The new Chuck Taylor shoe features a perforated micro-suede liner, a padded tongue and collar, and a Nike Lunarlon sock liner.

The trend of the running trainer is going to be around forever. Nike’s Air Max legacy has been around since 1987, and Adidas has been putting out running shoes since the 1970s. So the right casual trainers are popular and they always will be.

Brands like Saucony, Asics, and Garment Project are all really popular this year which is good for you as we stock all three. The Saucony Shadow 5000 offers comfort on an unparalleled scale, and they also look really cool with pin rolled jeans. Asics’ Gel Lyte range are also shoes that embrace sleek design, coupled with futuristic materials. The Gel Lyte Kayano is one of this year’s shoes to watch as it blends knitted material with classic design features.

Garment Project sneakers are a brand that keeps things simple. Its designs are minimalism personified, working on the “less is more” premise. Garment Project offers a clever blend of luxurious materials and simple designs to create the perfect casual trainer.

The Rise of The Trainer

The increasing popularity of the trainer is looking truly unstoppable at the moment. The humble trainer has come a long way from its simple beginnings, and the market for the versatile footwear shows no signs of waning anytime soon.

The very first incarnation of the trainer as we know it today was invented in the 19th Century and they were nicknamed ‘plimsolls’ due to the join of the upper of the shoe and rubber sole resembling the Plimsoll line on ships.

The durable and relatively cheap vulcanized rubber, made possible by the technological advances of the industrial revolution, was the material that made the sole of the plimsoll. Attached to a canvas or leather upper, it’s a design that is relatively unchanged in today’s trainer fashion.

From the end of the 19th and into the beginning of the 20th Century, the early trainers surged in popularity, as this revolutionary, comfortable and practical shoe was adopted by middle-class holidaymakers, sportsmen and women, and even the military.

Today, the trainer is utterly ubiquitous, trainers are worn by children, men, and women from all walks of life and of all social status. In fact, too many, trainers have ascended far above a simple piece of footwear, millions of us see our trainers as a symbol of status, power, and affiliation to a particular way of life.

Brands like Vans have heavy links in skate culture, while the likes of Adidas and Nike are entrenched in Hip Hop. In recent years, high-end brands have got in on the trainer market too, with the likes of Chanel, Prada, and Alexander McQueen all getting in on the act.

In fact, the link between celebrity and trainers has become commonplace, with some brands becoming synonymous with certain sports stars or musicians. The link between Nike and Michael Jordan has been the most notable of these affiliations.

According to Forbes’ Billionaire list, Jordan makes around $100 million a year, primarily from sales of his Air Jordan’s. That’s more money in a single year from shoe sales than he made in total from his salary over his fifteen-year basketball career. Many also see Kanye West’s foray into trainer design, originally with Nike, now Adidas, as something of a watershed moment in the mainstream popularity of trainers.

Trainers have been around for more than 100 years and they won’t be going anywhere soon. This summer is yours so be bold in your shoe choices! Clean designs, simple colors, and athletic brands are all in for your trainer wardrobe. Your shoes say a lot about you – even more than you might think – so it’s important to get the balance right.