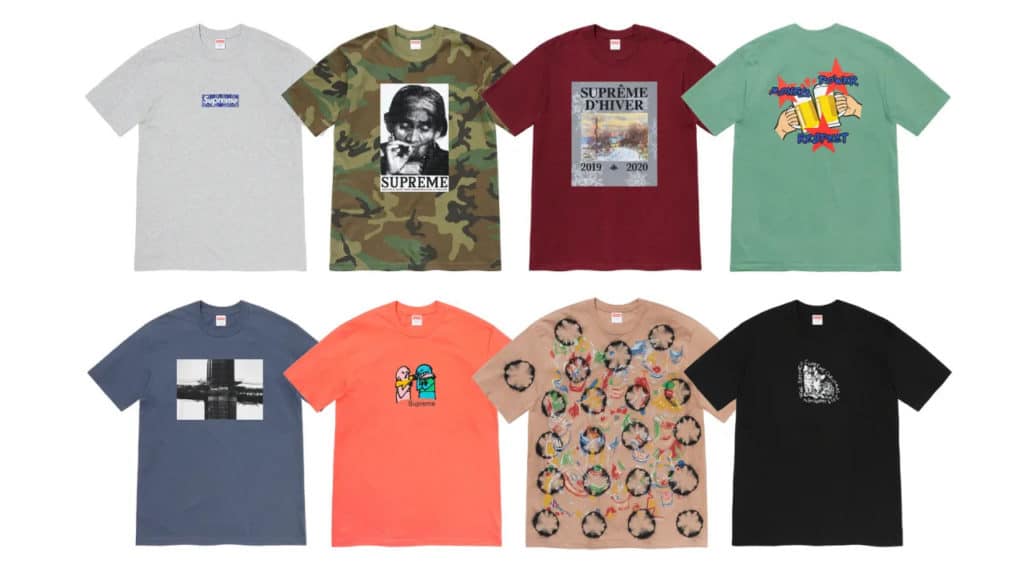 The fashion industry has crossed over with many different fields including music, art, and sports. One of the biggest influences, however, has to be the film industry, with countless collections being co-designed to promote or pay homage. This article takes a look at one of the world’s most popular brands, Supreme, and their best film collaborations to date. Ready to know a bit more about Supreme collaboration?

Since the day they started in 1994, the streetwear brand Supreme has looked to many different walks of life for inspiration for their ever-releasing collections. These collaborations have reached the music industry, the TV industry, and even politics, as they make it their mission to entice everyone and anyone to join the Supreme fanbase. Whether people invest in these limited edition collaborations because they’re a fan of the film and feel that nostalgic connection whenever they look at/wear the T-shirt or because they will buy into anything with the Supreme logo printed on the top of it, these collabs always come hand in hand with a lot of hype and a very quick sell-out.

There are no limits to the movies that Supreme has and no doubt will collaborate with. Some of the results of their past cross-overs have seen a Kermit Supreme photo tee alongside a Kermit figurine wearing a limited edition small white box logo tee, a Disney x Supreme series featuring the one and only Mickey Mouse and a T-shirt featuring a still from the film Blue Velvet, designed by the director of the film, David Lynch. Let’s take a look back at some of the most iconic Supreme x Film collabs and what the outcomes have been.

Supreme x Woody Allen kicked off the trend as one of their earlier film collaborations. Woody Allen is an American filmmaker, actor, writer, comedian, and musician whose career has gained him a huge following of devoted fans. Some of his films include Annie Hall, 1997, Midnight In Paris, 2011, Blue Jasmine in 2013, and Crisis In Six Scenes, 2016. This T-shirt follows the same design as the Charlie Chaplin T-shirt (see below) other than the portrait itself curves around the back of the T-shirt. The Supreme x Woody Allen T-shirt is incredibly rare to get hold of. If you’re a fan of old-school 90s movies, this is a cult piece for you to get.

The Supreme x Charlie Chaplin T-shirt closely followed the design and style of the Woody Allen T-shirt just two years later. Charlie Chaplin was an English comic actor who also worked as a filmmaker, a composer, and who kicked off another trend of the silent film era back in the 1920s. This T-shirt, featuring the iconic face of Charlie Chaplin, followed an unusual design that you’re not likely to see on a Supreme T-shirt nowadays.

Where Supreme T-shirts are now predominately photo box tees, the Charlie Chaplin T-shirt saw his face in a washed-out image on the bottom of the T-shirt with a Supreme logo in Charlie Chaplin’s handwriting style. This T-shirt was released in black and white and blue and white and remains a tricky T-shirt to get your hands on. If you’re lucky enough you can browse the internet and see what pops out.

Disney has got to be up there as one of the best Supreme collaborations of all time. What’s better? The collaboration featured the most loved and most iconic Disney character, Mickey Mouse. Supreme and Disney worked together to create a series of T-shirts and hoodies in the basic staple colors with Disneys’ Mickey Mouse taking center stage. The T-shirts came in colorways of black, white, light grey, dark grey, and light blue, and the hoodies dropped in black and grey versions. These Mickey Mouse Supreme pieces are Supreme collectors’ must-haves.

Supreme strike back again with another Supreme x Disney collaboration two years on from the Mickey Mouse works. This famous skate brand had to do some amazing and appealing graphics, inspired by original artwork. This time the spotlight is on Snow White. This drop saw the same black and white portrait photo of Snow White on all of the pieces, and when we say all, we mean all. Snow White’s face featured in a repeat print all over three colorways of a skate deck – pale green, pale pink, and white. Each of these skate decks has the Supreme box logo on the front and back.

This design was also interpreted as an Oxford shirt with the exact same print in pale pink, grey, and white. In addition to this, the Snow White long-sleeved T-shirt dropped as one of the five aforementioned David Lynch T-shirts. This T saw a repeat of three Snow White faces in a row with the words ‘GIMMIE GIMMIE GIMMIE’ on the back.

We all know the story of The Wizard of Oz, so this film doesn’t need much explanation. Dropped in 2013, Supreme worked with the film to create the photo T-shirt, featuring the two main characters on the front: Dorothy and the Wicked Witch of the West. This Wicked Witch of the West photo tee came out in a black and white colorway. The photo on the front is the witch casting her light over the well-known red-heeled glitter shoes – another potential Supreme collab? Naturally, the red box Supreme logo overlays the bottom right of the photo.

This is a collab that had all of the psychological film enthusiasts excited. Taxi Driver is an American neo-noir psychological thriller released in 1976, written by Paul Schrader and directed by Martin Scorsese. The film is set in New York City during the time of the Vietnam war and has a solid cast of Robert De Niro, Jodie Foster, Harvey Keitel, Cybill Shepherd, Peter Boyle, and Albert Brooks. Having been nominated for a series of awards and winning a few, Supreme saw the potential that Taxi Driver had to make a great collaboration, enticing film and fashion lovers – money in hand, straight to their open doors.

It goes without saying that Robert De Niro was the obvious feature choice for this collab. His iconic Travis Bickle looks from Taxi Driver was plastered on a series of colorful T-shirts in the Supreme photo tee style, complemented with the Supreme box logo overlaying the black and white photo. In addition to the T-shirts, Supreme released Robert De Niro Supreme wooden skate decks with the same image and style.

This is a nostalgic collaboration if there ever was one. The Supreme x ET collab gave us a series of T-shirts and hoodies with the official font reading ‘Supreme’ on the front and official artwork on the reverse side. The T-shirts and hoodies all dropped in colorways of black, white, and teal. E.T has never been more at home with this collaboration. The best creation of 2015? We think so.

Larry Clark is an award-winning American film director that has directed some iconic films including Ken Park, Bully, Marfa Girl, The Smell of Us, and most importantly the 1995 film Kids. To celebrate the 20th anniversary of the film, Larry Clark worked alongside Supreme to create a capsule collection consisting of skate decks, hoodies, and long and short-sleeved T-shirts. These T-shirts feature different stills from the film with the words ‘Jesus Christ. What happened?’ on the reverse side.

This wasn’t the first work with Supreme that Larry Clark did. In 2005 he shot an X-rated calendar that released with his Teenage Lust photo T-shirt, celebrating his book, Teenage Lust, which published in 1983.

The Supreme Betty Boop collaboration was a big hit for one of their film collabs. They created the all-cotton, Raglan long-sleeved T-shirts with the iconic Betty graphic on the front (see below), followed by the grail of the Betty Boop satin jacket in 1016. This jacket came in two colorways of black and blue, both with flannel lining and embroidery detailing with the Betty Boop stitch graphic on the back. Are you looking for a cool sweater or a hoodie?

Supreme collaborated with Akira earlier this year, creating a series of graphic clothing. Akira is a Japanese animated science fiction film that was released in 1988. The film was directed by Katsuhiro Otomo, produced by Ryōhei Suzuki and Shunzō Katō, and written by Otomo and Izo Hashimoto, all of which were based on Otomo’s manga of the same name.

This drop saw the release of a load of clothing, featuring a black and white still from the animated film. The lookbook for the collection was shot in the bright lights of Japan. The collection consisted of black fishtail parka jackets, red comic-style graphic jumpers, polo soccer shirts, work jackets with woven patches, full-length overalls with woven patches, and a series of monochrome and colorful short and long-sleeved T-shirts and hoodies. In addition to the clothes, they created Supreme x Akira syringe 5-panel cap and skate decks, pill plates, and syringe trays. You can watch the Supreme x Akira video here.

The Supreme x Scarface collection is the latest Supreme film collaboration. Scarface is a 1983 drama/thriller film directed by Brian De Palma and adapted from the 1932 film version. Al Pacino plays the lead role of Tony Montana who is the Drug Lord of Miami. Already an iconic film, Scarface has now also secured its iconic place in the fashion world after Supreme got their hands on it.

As if this wasn’t enough, A few months later, Supreme x Scarface came back with another drop. This time the collection consisted of higher-end pieces with a significant price rise. This release saw the Scarface Leather Embroidered Jacket in black and white. This jacket is made of cowhide and has a satin lining with high-quality embroidery all over the front, back, sides, and sleeves of the jacket. As well as this, they dropped the ‘The World Is Yours’ denim jacket in 13 oz cotton with an all-over colorful print. A matching pair of jeans came with this.

This depends based on someone’s budget. Do you feel like Nike or Lacoste is pricey? The truth is that some collaborations tend to be pricey. For instance, Supreme x Louis Vuitton might be out of everyone’s budget. However, by browsing through some online stores and aiming for seasonal or holiday discounts, Supreme fans can land a great deal. You can focus on their apparel instead of sneakers or skateboards. Leave high fashion for the celebrities, and try out some simple pants that can still make for an icon piece!

As you can see, Supreme has worked alongside many films and iconic faces from films to extend their evergrowing Supreme collections. Creating photo T-shirts to syringe trays and working with real-life to cartoon characters, they have spanned these film collabs over the decades to make sure they cover every Supreme fan from every walk of life. With so many films behind us, there is simply no knowing who or what or which film Supreme will collaborate with next to create clothing and objects. What are your bets on?