A keychain with a some brass balls, with a bullet or with a knife on the end are only the tip of the iceberg when it comes to Supreme’s keychains. Being one of the most hyped brands of today, Supreme is always looking to up their game, and this doesn’t fall short when it comes to accessories. Let’s take a look at the 15 best Supreme keyrings.

Since their rapid growth from the day they started in 1994, Supreme has ventured into all areas of the fashion and lifestyle industry, creating many limited-edition pieces that draw the fans in closer with every drop. For a brand that has so much hype, you wouldn’t necessarily assume that they would need to battle their way for attention, yet they do. Supreme is continuously creating and releasing the coolest and most bizarre pieces and collaborations, ensuring all eyes are and stay on them.

This article celebrates all the wonders of Supreme’s accessories – but not just any accessory, we’re paying tribute to the almighty keychain. We have looked into a whole load of Supreme keychains and narrowed them down to our favourite 15 designs. From a pair of brass balls to a Supreme x Louis Vuitton pocket pen knife, we’ve made sure we have covered all of the best bits. 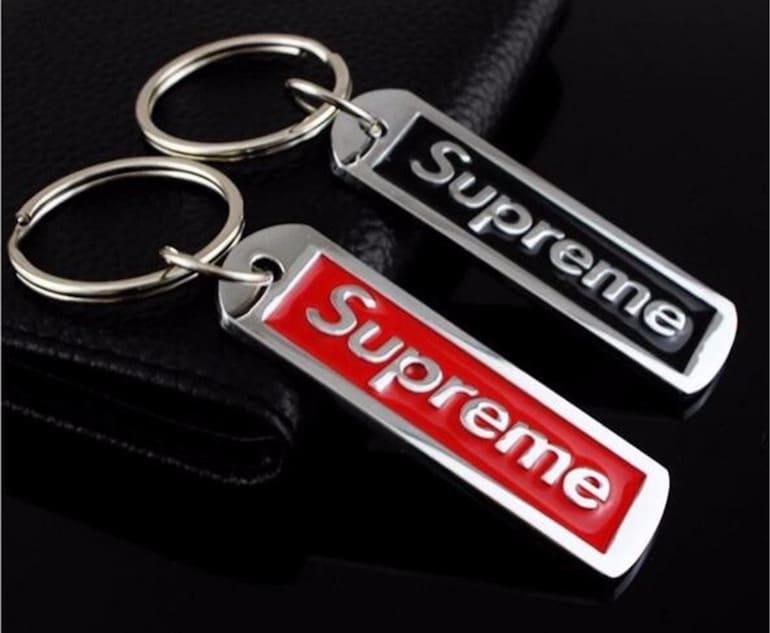 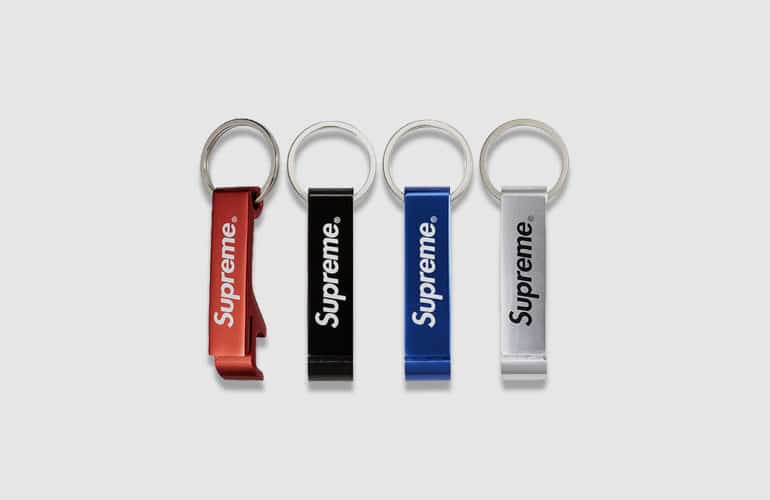 The Supreme flashlight keychain is definitely one of the most popular keychain releases with thanks to it’s cleverly hidden feature. These fully functioning mini flashlights dropped in black, blue and red colourways with the Supreme logo on the front. The stand out feature of these flashlights is that when you shine it, the light reads the words ‘Get Your Shit Together’. 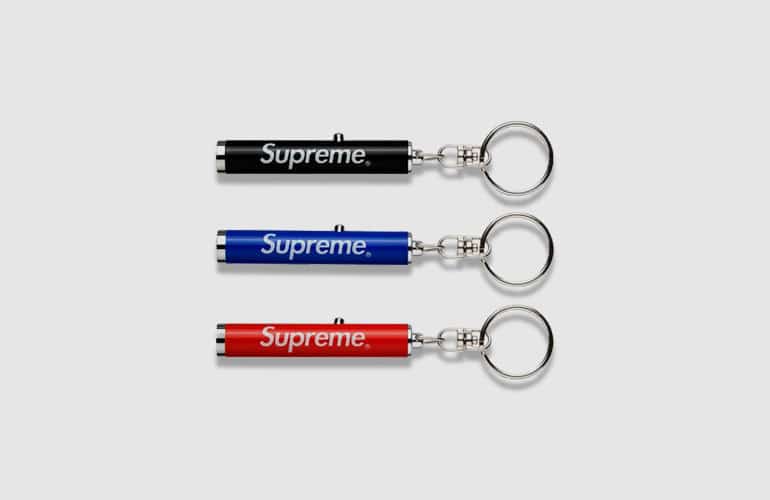 In 2011, Supreme collaborated with Bad Boy Records to create a limited-edition T-shirt and keychain featuring the one and only Notorious B.I.G. This partnership saw Biggie’s ‘Ready To Die’ album cover on the centre of a T-shirt and filling up the entire keyring with the Supreme branding on the back. This drop was iconic for all Hip Hop enthusiasts. The T-shirt dropped in the colours of black, white, grey and orange, but the Supreme Biggie keyring only dropped in the classic transparent white colourway. It’s not unusual for Supreme to recreate an object alongside the Supreme clothing, for example, most of their celebrity photo T-shirts also dropped in a poster, and the Kermit edition came with a mini Kermit toy. 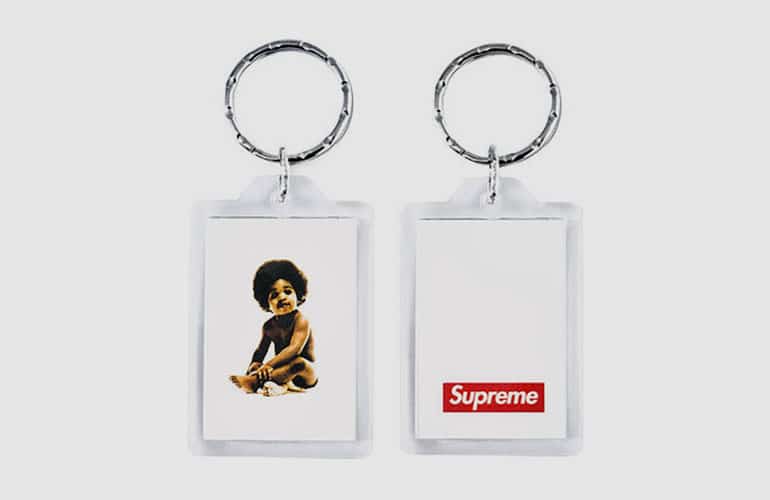 The Supreme team have always been baseball fans, so it comes as no surprise that in their time they have created a series of baseball accessories, caps etc. In 2006, Supreme created their own full-size and mini versions of the famous Louisville Slugger baseball bat that came out in red, white and black, fully kitted out with the Supreme branding on the front and the words ‘Look Out Sucka!!’ on the back. In 2011, Supreme decided to drop these again in the form of a keychain. 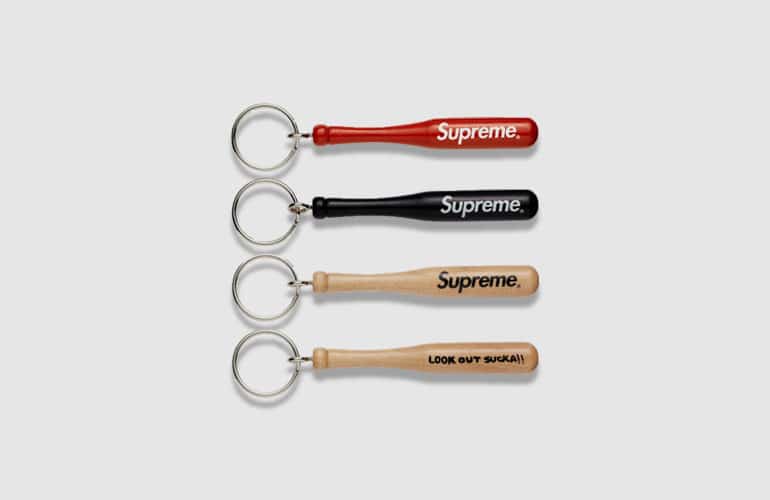 Next up, we have the Supreme Virgin Mary keychain that was designed and released in 2013. This keychain has a glass cube on the end with an image of the Virgin Mary in the middle, with the ‘Supreme’ text overlaying it. Simple as that. Supreme made sure this keychain was a standout piece, making it the same size as your average car key – quite a hefty keyring to be carrying around in your pocket. The only design flaw? Keys are made to be dropped. Glass isn’t. 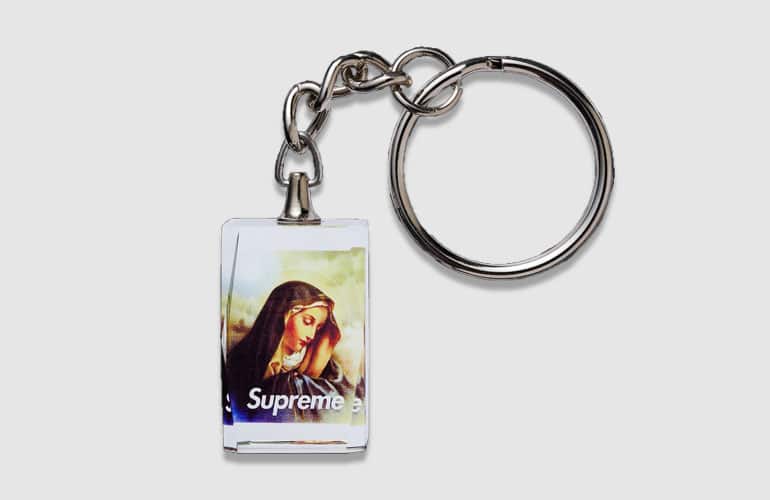 The moulded metal M16 Rifle Supreme keychain was a quick sell-out in 2014. This keychain featured white outline detailing on the front with the Supreme branding on the end. Releasing in a black and red colourway, this keyring reps everything ‘cool’ about Supreme. Want a Fun fact? This keychain doubles up as a bottle opener, making them the most useful mini M16 you could possibly own. 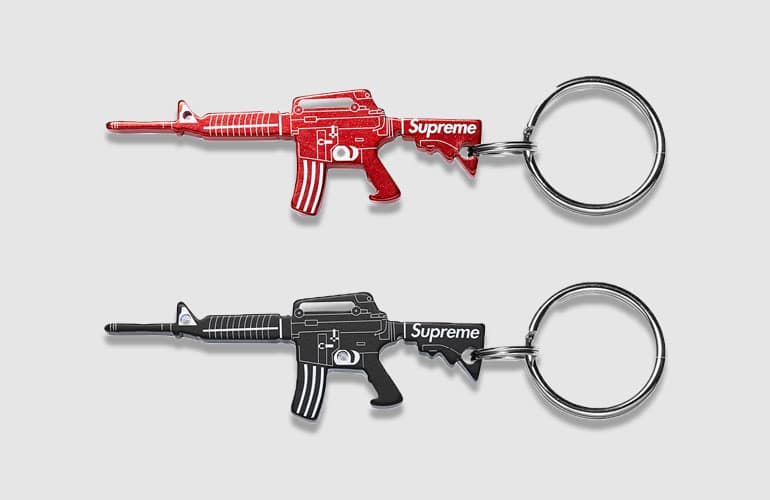 2014 saw the creation of one of the coolest keychains Supreme had made to date. They dipped their toes into the ‘weapon’ recreation for the aforementionde M16 Rifle keychain, but this took matters to another level. This keychain is a metal replica of a .44 bullet case that has a flick knife inside. Consider it like a seriously cool, all be it a one-dimensional, version of a swiss army knife. The Supreme box logo features on the outside of the bullet keychain. This keychain has got to be one of our favourites for two reasons. The first being that each one of these keychains has different marks or scratches on them, making them that little bit different from the next, where a lot of Supreme items are direct copies of each other. The other reason is down to the fact that they simply look cool. 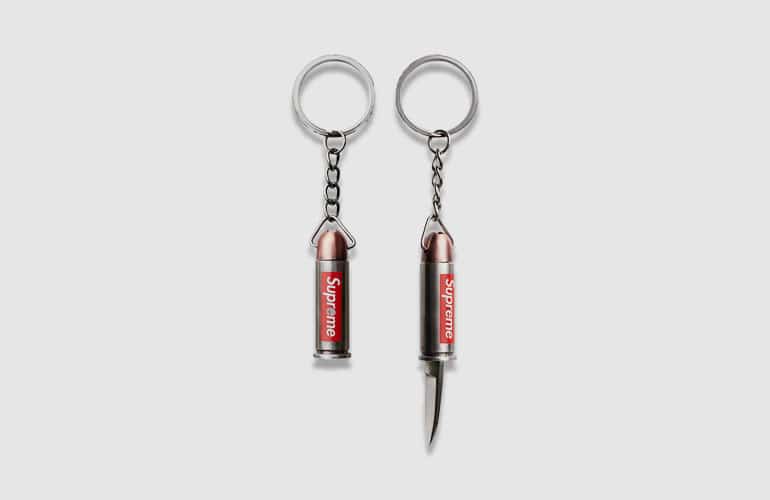 Another Supreme classic; the metal tag keychain celebrates the box logo in its most simplistic form. Coming in black and red colourways, this keychain is one for the collectors who copped the 2009 plastic version but are now in the game for something a little more premium. Fans had previously complained about how these simple Supreme metal keychains wore down easily, for example, the paint rubbing off too soon. That’s why these ones were popular – the metal sections are raised so that the paint won’t come into direct contact with any surfaces, making them much more durable. 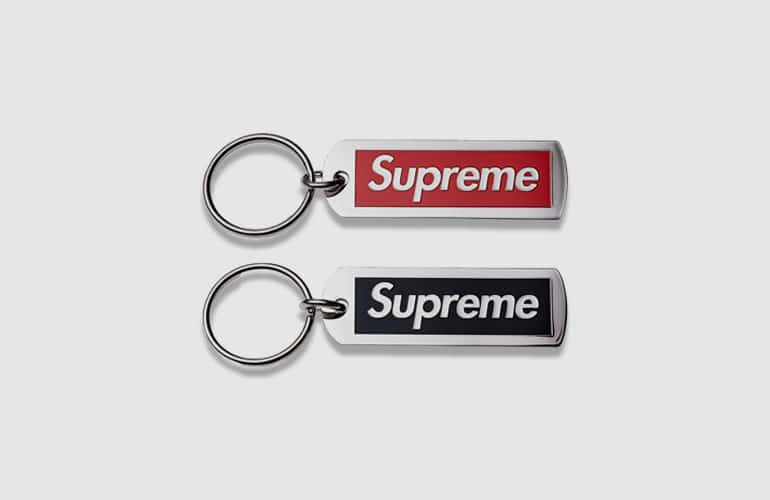 This Child Of Hell keychain released alongside two cotton jumpers that read the same thing. The jumpers released in a yellow/black and black/red colourway and the keychain released in the black/red version alone. In addition to the jumpers and keychain, they created more colourways of the Child Of Hell T-shirt, featuring the writing alongside three colourful balloons. This T-shirt came in a beige/tan, black, white, teal and purple. If these weren’t enough, they also created and sold the Child Of Hell beanie, coming in black, blue, white, red, and yellow. This keychain is set on black leather with the words ‘Child Of Hell’ embossed on the front and ‘Supreme’ in silver on the reverse side. 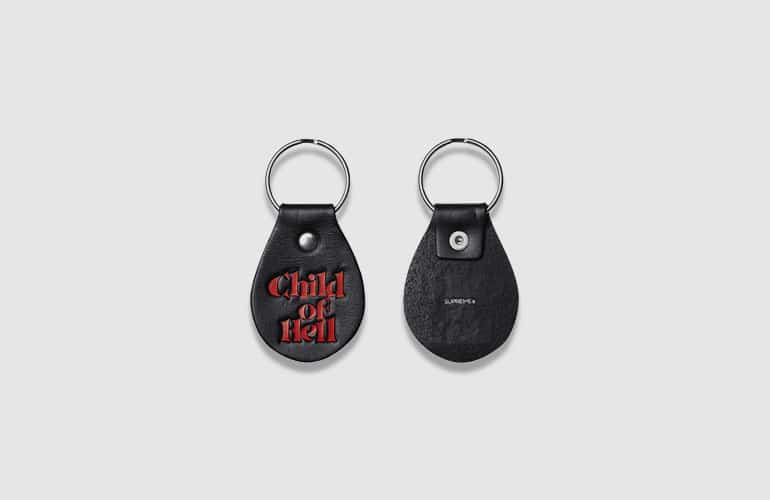 For something with a pretty nice name, this keychain is not one to play about with. The Supreme Butterfly Knife keychain demonstrated that Supreme can compete with the big kids. This knife features a 1.5 inch blade that is accessed through the rotating red handles. The word ‘Supreme’ is printed in white over the top. They call this a mini knife, but you could definitely do enough damage with this. 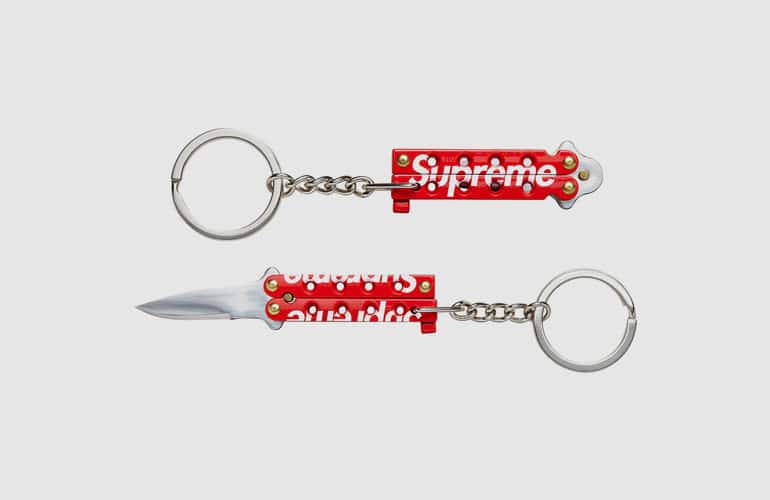 In the style of a car keychain, Supreme released the F*ck Em All leather and enamel keychain in 2016. On the front, the ‘F*ck Em All’ writing wraps round an Alfa Romeo style logo with the word ‘Supreme’ along the top. On the rear side of the keychain are the words ‘For My 1/2 Ass Friends’, embossed in gold on the leather. We love how subtle they have made this keychain. As you can imagine, this was an extremely quick sell out. Hypebeats love a bit of sass. 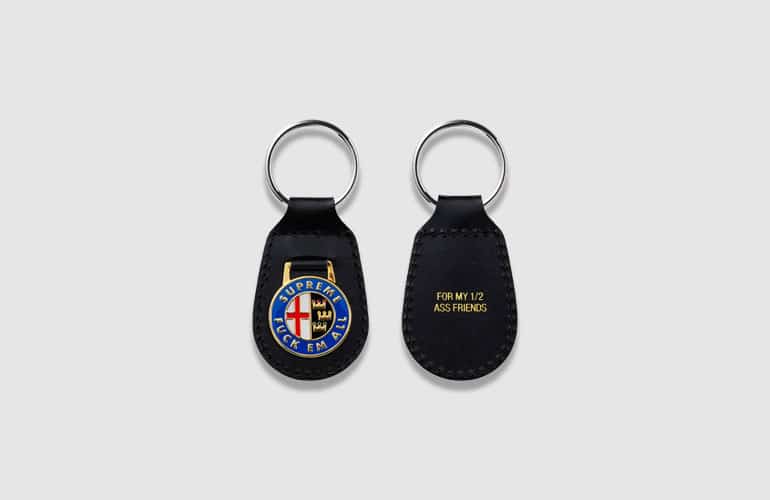 In 2016, Supreme took some balls of steel and transformed them into brass. This keychain was the subject of a lot of chat, as we’re sure you can imagine. Was this keychain just Supreme being ballsy (pardon the pun) or was it their way of testing just how far Hypebeasts would do to cop the latest drop? If this was a test, Supreme was laughing, as with no surprise, these told out quicker than you could say ‘brass balls’. Regardless of the reason, you’ve got to admire the detail they put on these pair of balls. 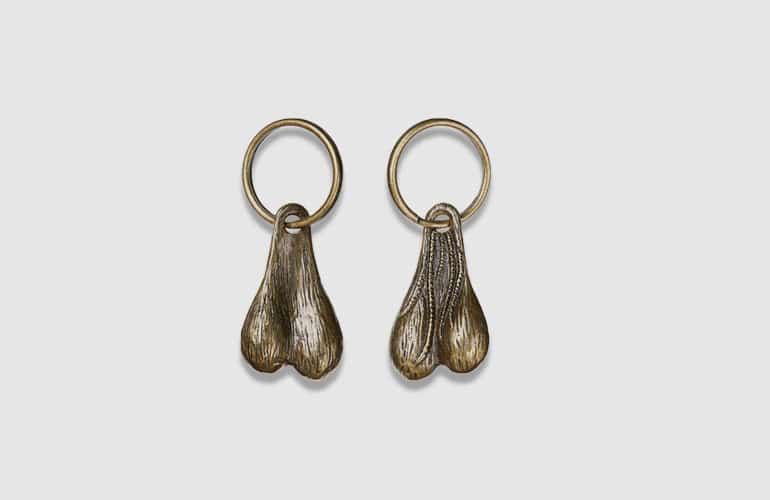 The Grandprix gold and silver keychain released in 2016. Both made of alloy, this keychain features the word ‘Supreme’ as a parody of the Ferrari logo, making for a flashy accessory to add to the Supreme collection. Supreme created a T-shirt that dropped in 2013 featuring a vintage graphic of a red Ferrari with the same Supreme x Ferrari logo mix up underneath, so this keychain was a long time coming. 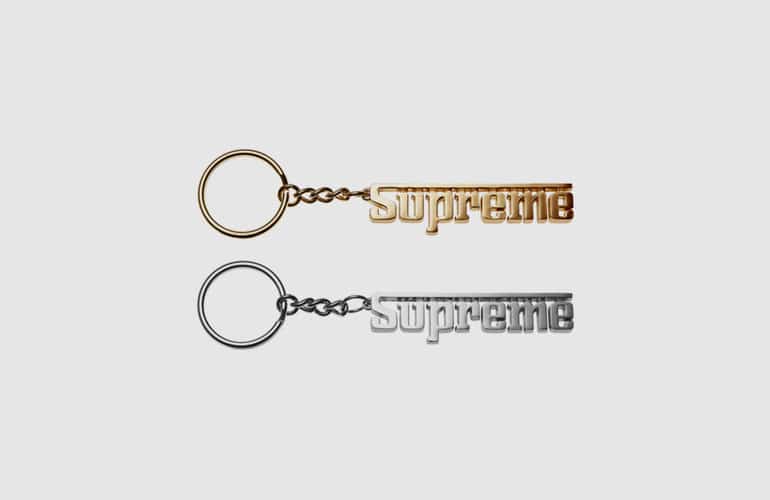 The Supreme Coffin keychain was one of the best keychain releases of this year. This 3 inch metal coffin opens up and doubles as cigarette holder and ashtray. When it opens, an extra piece pops out that resembles the end of a spade. This is used to hold the cigarette and tucks back into the coffin once finished with. This coffin keychain comes in silver with the red Supreme box logo on the front. On the back the words ‘ See You In Hell’ are etched. 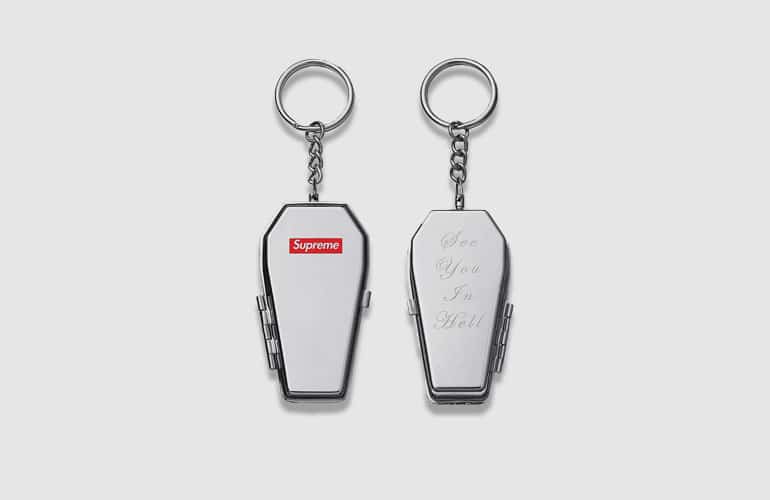 The Supreme x Louis Vuitton collaboration earlier this year took Supreme and fashion fans by an absolute storm. This was partially due to how limited this collection was, and particularly to that fact that it was selling at extortionate prices. Part of the collection included the pocket knife keychain that came in a red/white/silver colourway and a Louis Vuitton brown/gold colourway. Both of these pocket knives had the LV monogram with the Supreme branding layered over the top. Some of the tools that the knife packs includes a pair of scissors, a knife, a nail file and two keyring options. If you managed to get your hands on one of these Supreme x LV keychains, you’re one of the lucky few. 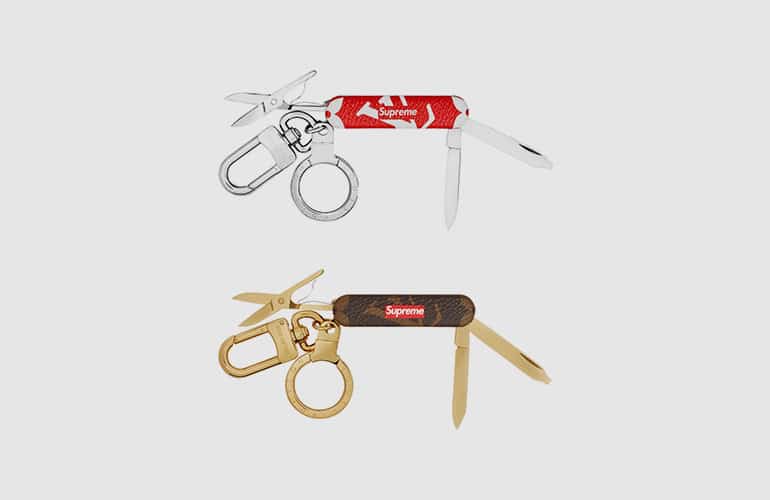 As you can see, Supreme doesn’t mess about when it comes to creating their very own keychains (with exception to their brass balls drop). Creating these keychains has become a huge part of their heritage, and they are now a fundamental factor in every release and collaboration they do. From classic metal and plastic box logo keychains to keychains with some serious knives attached, they really do know how to draw all sorts of people into their already impressive fan base. Their keychains are such a hit that they included one in their Supreme x Louis Vuitton collaboration, which is their biggest collaboration to date. Some – or most – of these keychains are rare, so if you’re the lucky owner of one, keep a firm grip of it.

Eager To Find The Best Mens Back Shaver?...

10 Best Oud Colognes That Work With Every...

10 Best Trimmers For Balls: The Only Game...

Need A Beard Straightener? Here Are 10 Of...