The 10 Coolest Hotels in the World 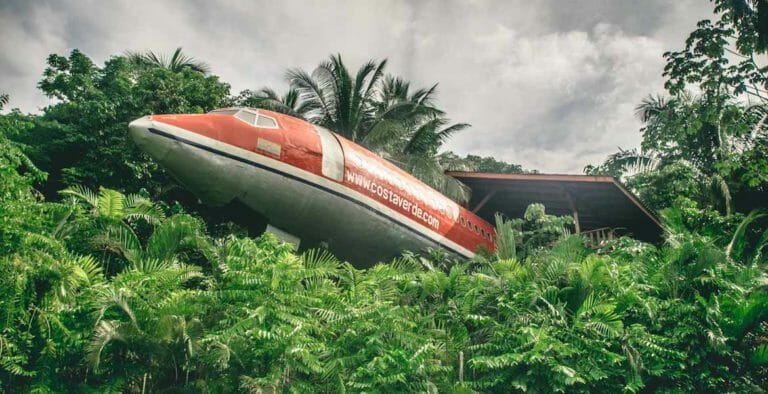 We love a holiday as much as the next person, and we are always up for trying out new hotels. While we aren’t suggesting any of the hotels in the list below are actually obtainable, they are some of the coolest hotels we have ever laid our eyes upon and we are more than tempted to spend the big bucks on a room in some of them. We apologise in advance for presenting you with a list of hotels that, quite frankly, only the rich and famous can afford. Enjoy.

Having aspirations is an attractive trait to a lot of people and everyone aspires to live the height of luxury at one point in their lives. While this is a bit of a pipe dream, we can still hope. Here we have come up with a list of the ten hotels we want to try the most, from the most obscure (think hotels where you can have breakfast with Giraffes) to the seven star epitome of luxury. We have trawled through the thousands of hotels across the world and bring to you the most unique, interesting and hidden hotels.

This is one of the most famous hotels in the world and boasts that you can quite literally dine with giraffes. Giraffe Manor is owned by The Safari Collection and is set in 12 acres of private land, which is sat in 140 acres of indigenous forest just near Nairobi. The hotel itself is a 1930s manor house which has earned itself the title of one of Nairobi’s most cherished and celebrated buildings. It is the original safari house, with a group of European tourists setting it up in the 1930s when they decided to make Africa a holiday destination. One of the 12 rooms (yes that’s right, the hotel is extremely exclusive) has actually been used in the film Out Of Africa.

The best thing about Giraffe Manor, besides its incredible exterior and interior, is the way in which you can spend your mornings eating breakfast with the herd of giraffes that roam the residence. They poke their heads through windows morning and evening (it’s your food that they’re really after), before they reside back to their forest sanctuary.

Giraffe Manor is one of the coolest hotels from around the world and can be booked for the night or as part of a complete tailor-made safari with The Safari Collection. 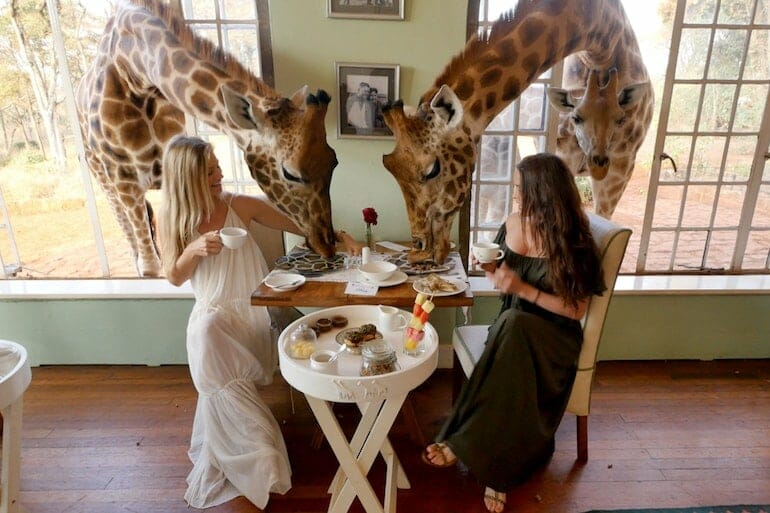 This is one of the most amazing hotels where you can blag yourself one of the co0lest hotel rooms in the world. Kakslauttanen Arctic Resort offers unforgettable types of lodging in the Finnish Lapland, from glass igloos to luxurious log cabins. If you’re planning to head up to the Arctic Circle for a holiday then there really is no other place to stay than this hotel.

Set in Saariselka, Finland, this is the original igloo village and you can stay in a glass one as you gaze up at the Northern Lights. The two person igloos offer a private toilet and bedroom, while four person igloos give you a shower as well. If that doesn’t take your fancy, you can hire out a glass chalet (it still take the form of an igloo). If you aren’t into sleeping in a glass igloo, then you can always stay in one of the luxurious log cabins, or in the luxurious queen suites.

Why would you want to go to the Arctic Circle you ask? Well, to see the Northern Lights is one reason, but also to take one of the most romantic breaks imaginable. 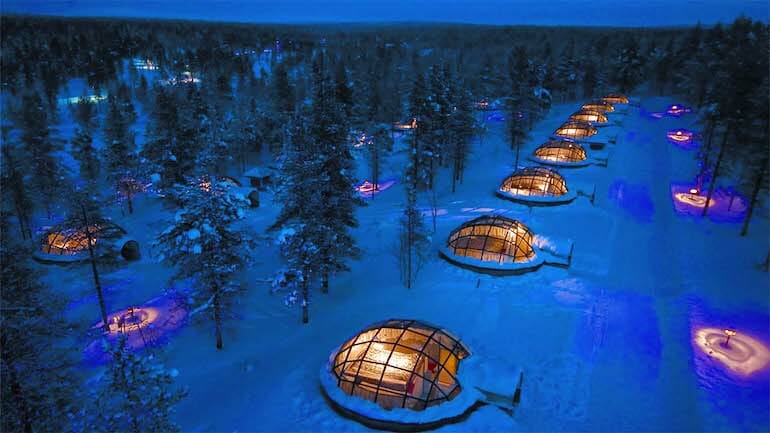 As hotels go, this is probably one of the most iconic and instantly recognisable on the planet. Atlantis, The Palm is situated in Dubai and dominates the skyline, making it look like it actually does not exist. The lavish marine-themed resort combines luxury with a whole host of unique attractions, bringing the legend of Atlantis to life.

The hotel boasts the passageways and tunnels of The Lost Chambers Aquarium, and you will find over 65,000 marine animals at the Ambassador Lagoon or can take a trip to the Aquaventure Waterpark. Atlantis, The Palm has it all. The hotel also boasts to have the first Nobu in the Middle East, so head down there for some serious culinary delights (although if that doesn’t take your fancy there are plenty of other restaurants and bars to try out). 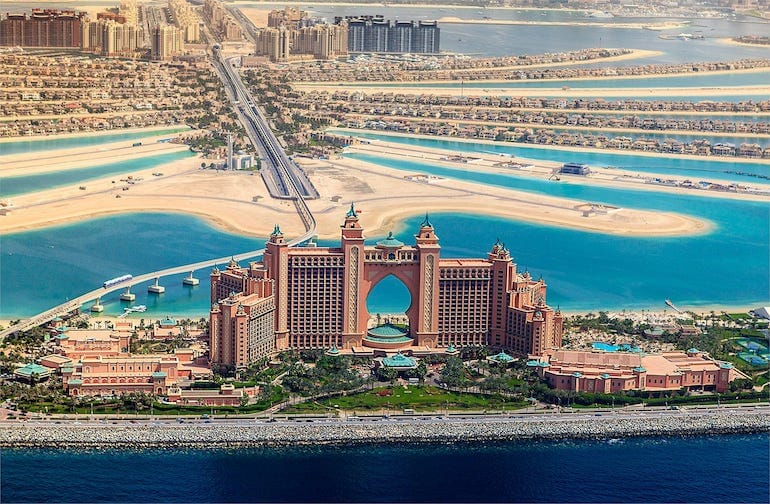 No Man’s Fort is definitely one of the most unique hotels in Britain. Situated just off the South Coast near to Portsmouth, there really is no other hotel quite like it. With 23 spacious en suite bedroom suites, you can guarantee that you are going to get epic sea views. With a choice of five bars, casual and formal dining, rooftop hot tubs, a cabaret club and the opportunity to toast marshmallows around a fire pit, you will be able to sit back and relax in a location like no other.

It stands as one of the United Kingdom’s most secluded locations and will provide you with one of the most interesting stays of your life. The old fort has been completely transformed to cater for your needs and is definitely one to boast to your friends about. 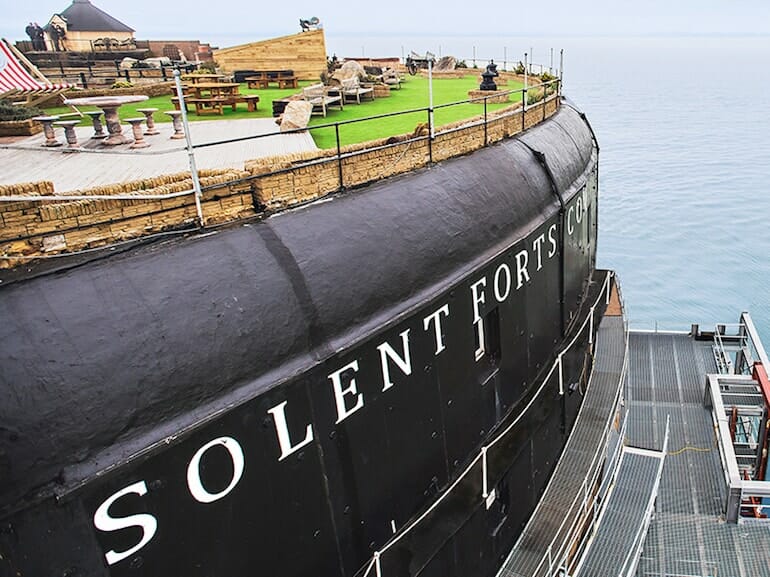 The andBeyond Ngorongoro Crater Lodge sits on the rim of the Ngorongoro Crater, offering sweeping views down and into the crater itself. In the crater you can find a myriad of creatures and birds, from hippos to leopards. The crater has allowed one of Africa’s most amazing landscapes to form and it is one of the best holiday destinations in the world.

The lodge is a masterpiece in itself too. Its design draws together an array of African textures and cultures and you can expect banana-leaf ceilings, mud brick, thatched-palm roofs, combined with ornate French baroque interiors that sparkle with gilt mirrors and beaded chandeliers.

The hotel is referred to as ‘Maasai meets Versaille’, and from the outside, guest villas on stilts evoke traditional East African homesteads. Inside is another story altogether: beaded chandeliers dangle from banana-leaf ceilings, gilt mirrors hang over spacious bathtubs; and raw silk curtains billow amid antiques, Persian rugs, and four-poster beds. Floor-to-ceiling windows look out onto sweeping views of the crater below. Luxury really does meet the wild here. 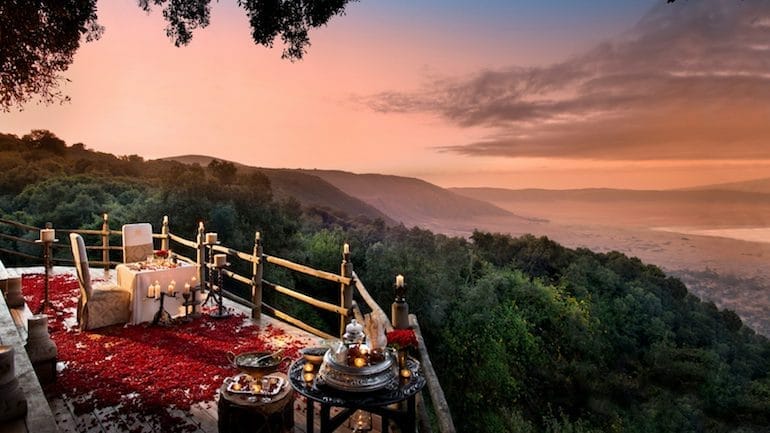 This is a hotel for absolutely everybody, especially those who want an escape from the city. The peace and tranquility of Manuel Antonio‘s legendary white sand beaches and National Park are a complete retreat from the mundane life we all live. Situated a few hundred yards from the beach, Costa Verde features three cliff-side pools with sundecks and spacious rooms, studios and bungalows, and stands as one of the most pleasant hotels in the world.

Over the course of 25 years, Costa Verde has been specially developed, designed and constructed to offer guests unique and unrivalled tropical luxury. This is a rare corner of the world that can be enjoyed at your free will.

Our favourite feature of this unique hotel is in fact one of the suites. The team behind the resort carefully transported the pieces of an aeroplane on five, big-rig trucks to the jungles of Manuel Antonio where they have been recreated into a unique jumbo hotel suite. It sits on the edge of the National Park and is perched on a 50-foot pedestal – this truly is a unique stay. 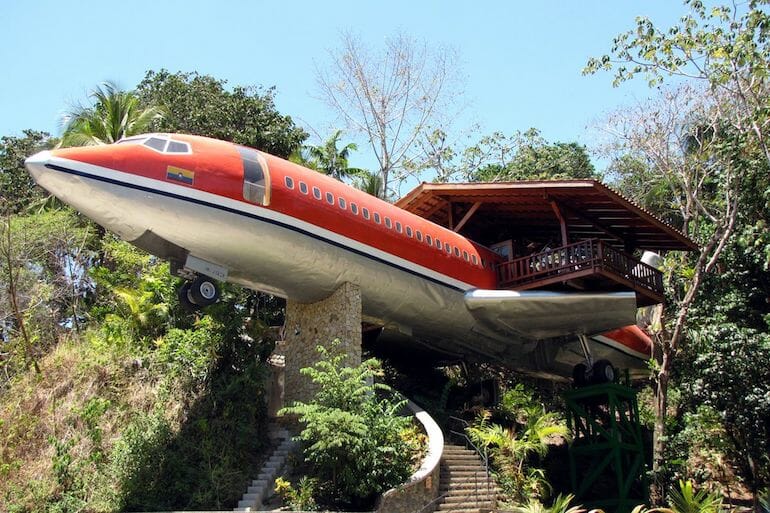 The Ice Hotel in Sweden sits 200km north of the Arctic Circle in the small village of Jukkasjärvi, and is undoubtedly one of the best places you can stay in the world. While you may be thinking ‘sure this is great, but there are loads of ice hotels across the world’, this is actually the original and best one.

Over 1,000 tonnes of ice are sourced each winter from the nearby Torne River, and are then crafted into the Ice Hotel. Rooms are kept at minus five degrees continuously, so this really is a hotel that is set to take your breath away. 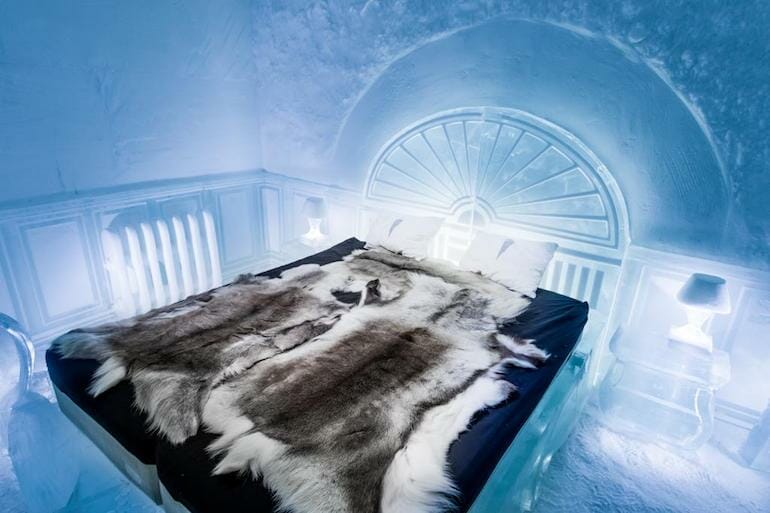 This is the most luxurious hotel in the world and stands as the only seven star hotel on the planet. The Burj Al Arab offers the best of the best to guests. This magnificent holiday destination sits in one of the most exciting cities in the world and dominates the skyline. Burj Al Arab offers guests the finest service and experiences throughout. This includes everything from an optional chauffeur-driven Rolls-Royce, helicopter trips from the iconic helipad, and private beach access to luxury leisure on a breathtaking terrace with pools and cabanas. The hotel also features some of the world’s best restaurants, including the highly acclaimed Nathan Outlaw at Al Mahara.

This is a celebrity hot spot and it’s no surprise as to why. It offers a discreet check-in service, so no one need know you are even there. So, if you want to retreat while still residing in one of the best and busies cities in the world (and have pretty deep pockets), then this one is for you. 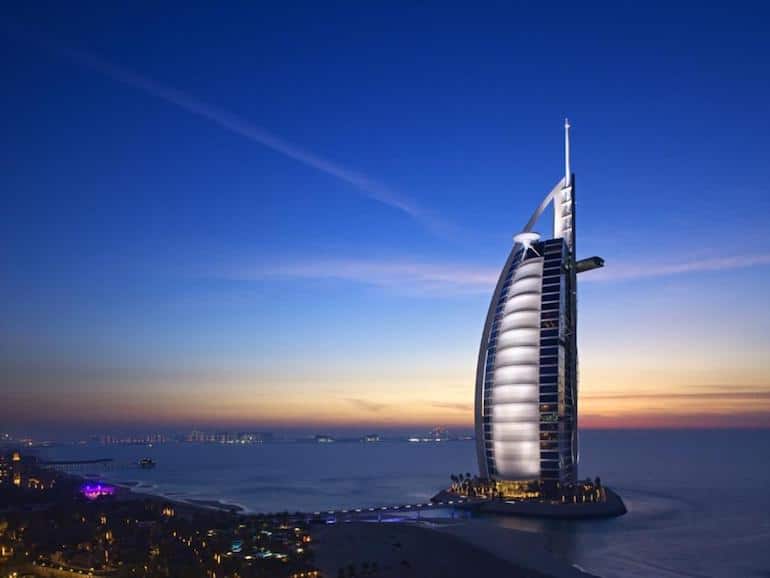 If you fancy interacting with elephants then this is the place to come on holiday. Anantara Golden Triangle Elephant Camp and Resort offers guests five star luxury that is practically unrivalled. Stunning views across Thailand, Myanmar and Laos make this one of the most tranquil locations on the planet.

The best bit about it is its famous elephant camp, and not to mention the famed Anantara Spa. There are 58 individual guest rooms and 19 suites, so this suits everyone from families to those wanting a quiet retreat. 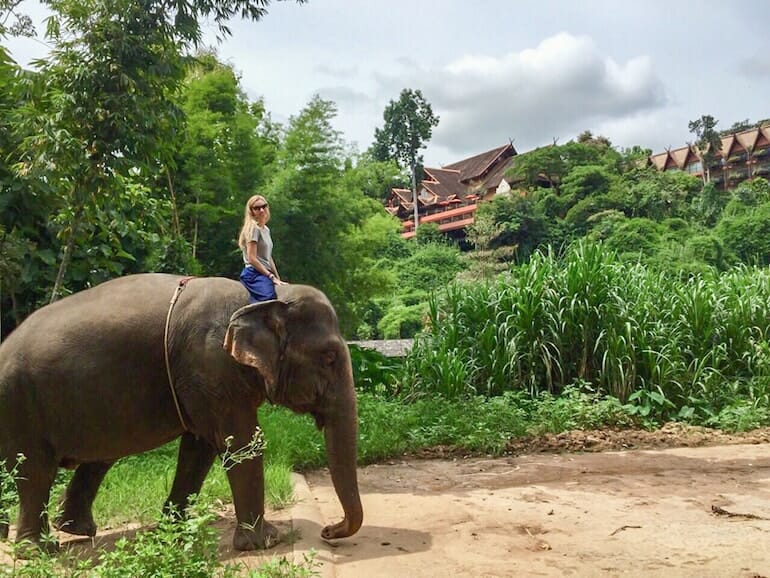 Hotel Marques de Riscal is one of the world’s craziest hotels. If you’re after a Michelin star dining experience set in one of the most iconic and unusual hotels then this is the place to come. Designed by acclaimed architect Frank Gehry, the hotel has become a highly sought after a luxury retreat. The visual impact of this hotel is unique and stunning and unlike anything else you will come across in the world. Gehry is famed for his work with Le Fondation Louis Vuitton in Paris, and this is another of his masterpieces.

Situated in Spain, this has the best of everything – sun, wine and tranquillity. 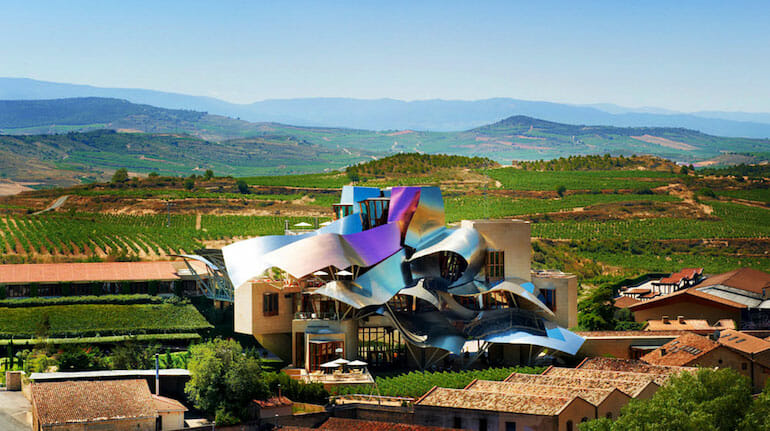 Above we have given you a taste of some of the best and coolest hotels in the world. From the Giraffe Hotel in Kenya to the Burj Al Arab on the coast of Dubai, these are the places where celebrities and the rich go to vacation. While these may seem out of reach right now, one day they may within your grasp.