The 10 Best Supreme Skateboards of All Time

As far as Supreme goes, getting your hands on products isn’t an easy feat. As for Supreme skateboards, they’re in a league of their own. They sell out instantly and over the years there have been some stellar designs.

Seeing as Supreme is first and foremost a skate brand, the skateboards are what epitomise James Jebbia’s aesthetic and vision. Here we have comprised a list of our favourite ones to date (but before you try and buy them, just know that most of them are quite literally unobtainable).

It’s pretty crazy that Supreme has come so far in recent years. When the brand first began back in 1994, neither customers or James Jebbia, Supreme’s founder, knew the reach that it would eventually garner. It is now undoubtedly one of the biggest brands in the world and the hype surrounding Supreme is pretty unreal.

While the clothes put out by the team behind the skate-based brand fly of shelves and sell out online instantly, skate decks are just as popular. So much so that they sell out even more quickly than the clothes themselves. Popular skate decks have typically included those that have seen a collaborative end product. Larry Clark x Supreme, Louis Vuitton x Supreme and Jeff Koons x Supreme have proven to be some of the most highly sought after decks to date, with retail prices on some going skywards of $10,000. “Sorry, how much are Supreme skateboards?” you ask. Originally not that expensive at all, but nowadays, due their popularity and rarity, the price of rare Supreme skateboards have sky-rocketed. 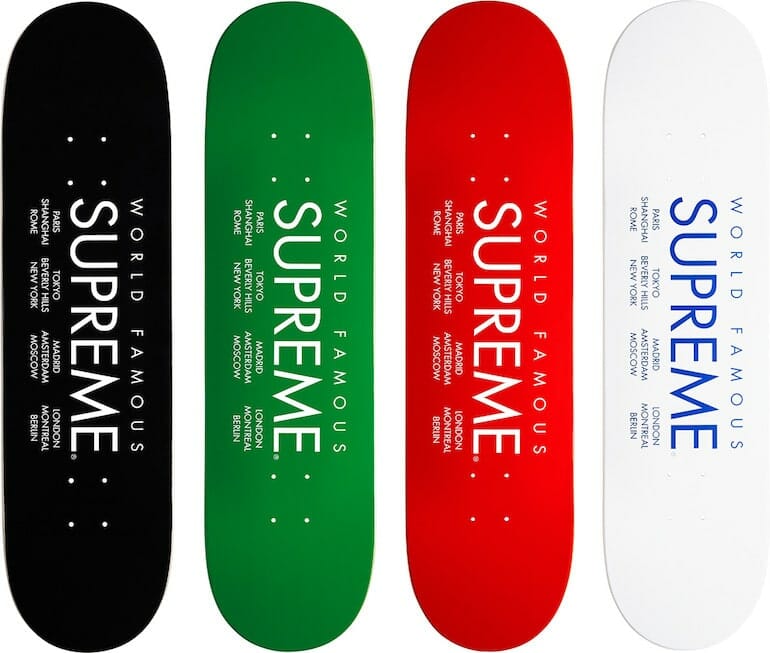 James Jebbia has stuck consistently to his vision of creating a skate brand for skaters, using skaters in his stores. Each season he puts out a different set of decks and here we are going to take you through our top picks for the best Supreme skateboards of all time and why they make the cut.

17 years ago Supreme got into a bit of hot water when they used the famous Louis Vuitton monogram across a range of skate decks. True to form, they did so without the Parisian brand’s consent (they have done this with other brands like Burberry over the years) and a copyright law suit soon followed as a result of the Supreme “Louis Vuitton” bootleg decks. The original decks only retailed for $60, but now they are going at a resell price of upwards of $30,000.

Fast-forward to 2017 and a surprising collaboration between the two now-mega-brands has been released, which includes a skate deck. Kim Jones realised that menswear, especially in New York, was becoming increasingly influenced by Supreme skateboards NYC and so he gave a collaboration his blessing. The red deck was emblazoned with the Louis Vuitton monogram, with Supreme detailing of course, and instantly became a sell out despite its pretty extortionate price. 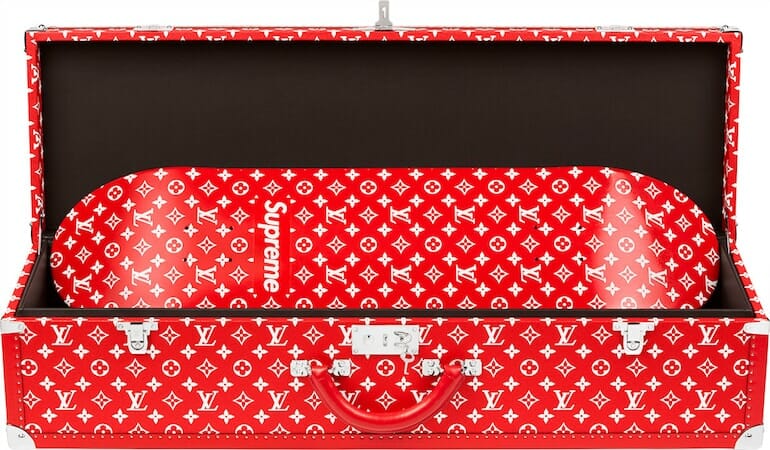 2015 marked the 20th anniversary of Larry Clark’s film Kids, which portrayed the escapades of New York City’s kids during the early Nineties. The film was met with mixed reactions, with some being offended by what it showed about youth culture. For others it is one of the most important films of recent decades to accurately portray our times and ways of living.

Larry Clark photographed skaters and came into contact with the film’s writer and its lead actor, Leo Fitzpatrick. The rest of the cast was made up of skaters, including two original Supreme team riders, Justin Pierce and Harold Hunter. Obviously for James Jebbia, Kids is an important testament to youth culture, which is essentially the foundation for Supreme. For the anniversary, Supreme put out a number of products, but notably it produced three skate decks. The decks (and T-shirts and other products) took stills from the film and implemented them into their designs. 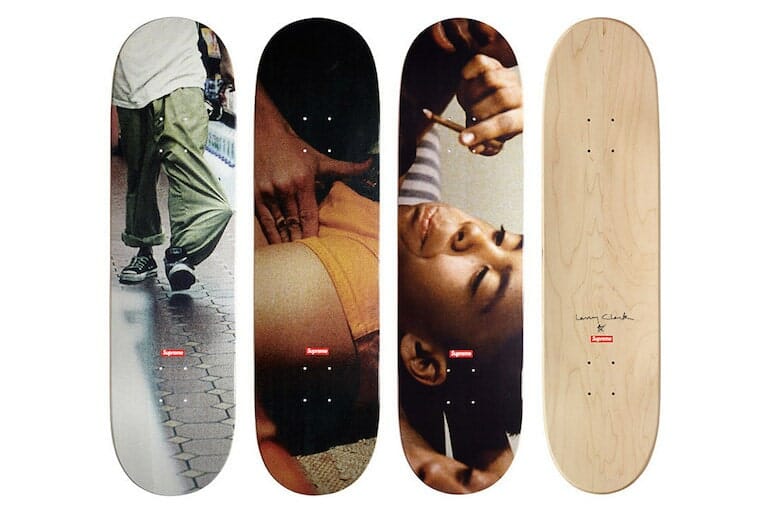 Back in 2006 Supreme enlisted the help of the controversial artist Jeff Koons to create a line of skate decks. It has proven to be one of the best collaborative Supreme skateboards by artists and Koons was called on for his designs because he is renowned for turning pop culture into art. Koons is one of the world’s most expensive artists and has a fan-base that spans a whole host of celebrities, including Jay-Z and Beyonce, while Virgil Abloh of Off-White fame brands him a key influence. It is therefore no surprise that he attracted the eye of James Jebbia and the Supreme team.

Koons loves bootlegging, which in case you hadn’t noticed, Supreme was very good at in its early days. The companionship was inevitable and not entirely surprising and all those years ago a trio of skate decks were created. The decks featured Koons’ colourful Monkey Train artwork, which Koons designed exclusively for the New York City-based brand. You can buy one of the decks at the Tate shop now for a cool £1500. 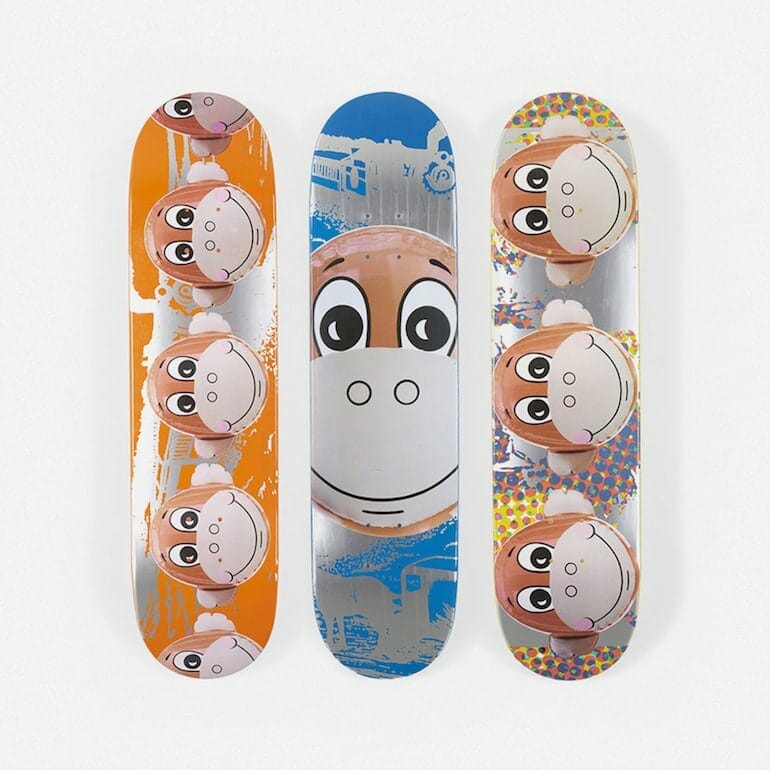 Damien Hirst is one of the richest artists in the world and his art work is undoubtedly the most sought after. He teamed up with Supreme in 2009 on a capsule collection that saw him put out T-shirts that said ‘Life’s a bitch and then you die’. For the skate decks, Hirst decided to lend one of his most famous and celebrated pieces of art to their creation. The ‘Spot Paintings’ are among his most prolific works and the ‘Pharmaceutical’ paintings are the most important and significant. Of the random coloured dots he explained once that “mathematically, with the spot paintings, I probably discovered the most fundamentally important thing in any kind of art. Which is the harmony of where color can exist on its own, interacting with other colors in a perfect format.”

For the Supreme collaboration, skate decks were covered in the all over print. Hirst also lent some of his other work to the collection, which saw the creation of eight decks. 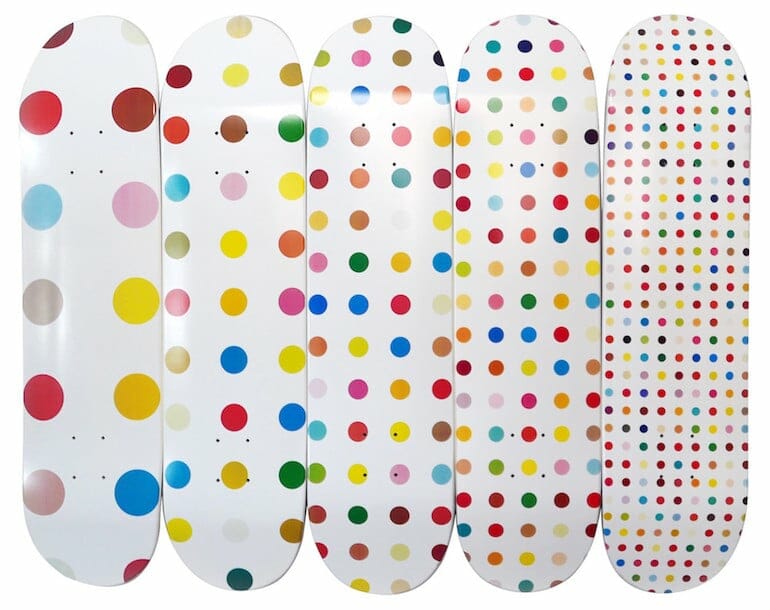 In 2011 Supreme and KAWS teamed up for a second time (they first collaborated in 2008 on a collection that really got people talking – he wrapped his character around a bikini clad Kate Moss and printed it on T-shirts), but the collection was somewhat unexpected. Rather than huge designs that screamed Kaws, the pair put together a very simple capsule collection that saw KAWS give a subtle riff on the Supreme box logo.

Across a collection of hoodies and of course skate decks, KAWS gave its touch to the Supreme logo in a subtle way which was actually a real hit. The hand drawn Supreme graphic was one of the most popular designs ever. 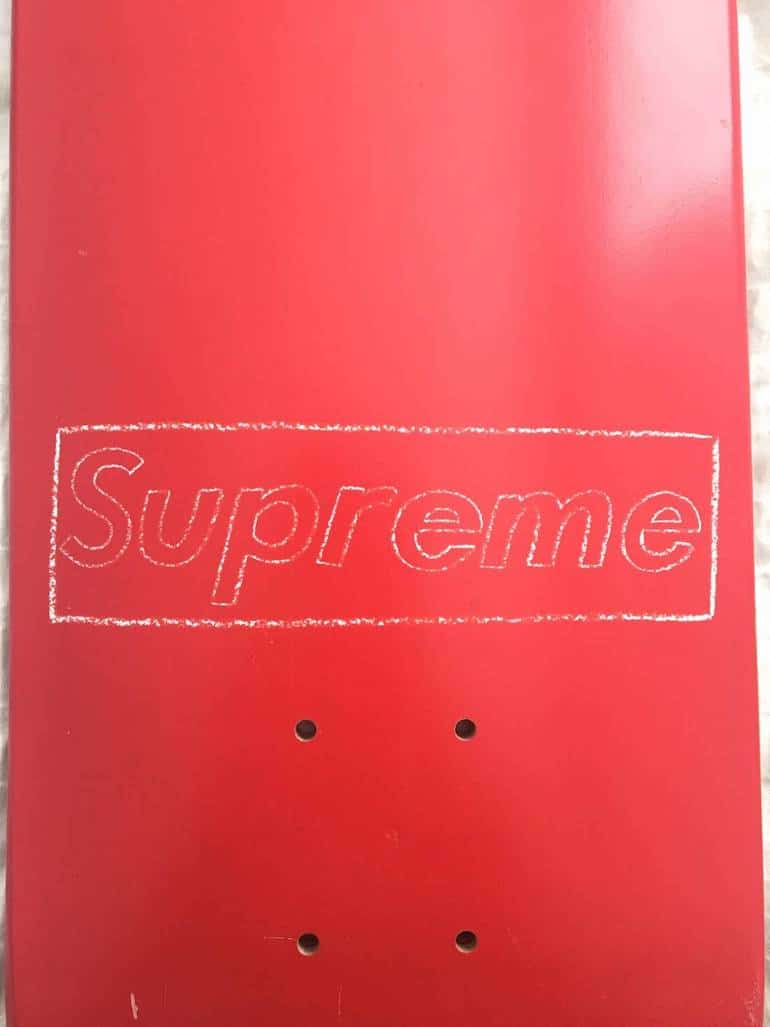 In 2012 Supreme collaborated with English visual artists the Chapman Brothers. Jake Chapman and Dinos Chapman had been working together since 1991 and during their time at the Royal College of Art, they assisted the renowned artistic duo Gilbert and George. The pair have become part of the same artistic legacy of the Nineties that also included Damien Hirst, Chris Ofili and Tracy Emin.

Their work is known for being offensive, controversial and often unapproved of, which is exactly (we assume) why Supreme wanted to collaborate with them. Despite their controversy, they were nominated rated for the Turner Prize in 2003 and are considered some of the most influential and important people in art history. The Supreme collaboration saw the creation of five unique and limited edition skate decks. They included prints of some of their most famous work, including the ‘Fuckface’ piece, which displayed deformed and sexually perverse plastic figurines, which essentially saw Supreme champion the brothers’ abrasive and explicit themes. 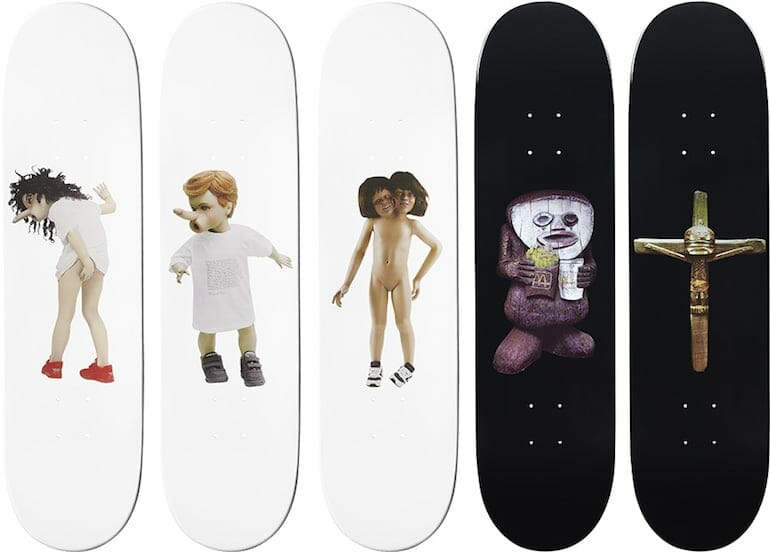 Richard Prince was the second artist to collaborate with Supreme on its skate decks, and in 2007 he designed two different ones for the brand. The first featured a black, abstract character on a white background and the second deck consisted of a laser etching of a skull-bunny on a black background.

Since 1980 Richard Prince had been an established artist, growing from a aspiring artist in New York (where Supreme was founded) to an international artistic figurehead. He was trained as a figure painter, but his work was very much influenced by popular culture. His work comments on artificiality and notably consumer culture, which is ironic as Supreme’s customers pretty much epitomise these themes.

The decks that Prince and Supreme created are some of the most simple ever to be sold, but it worked, and Supreme’s artistic draw was once again met with celebration. 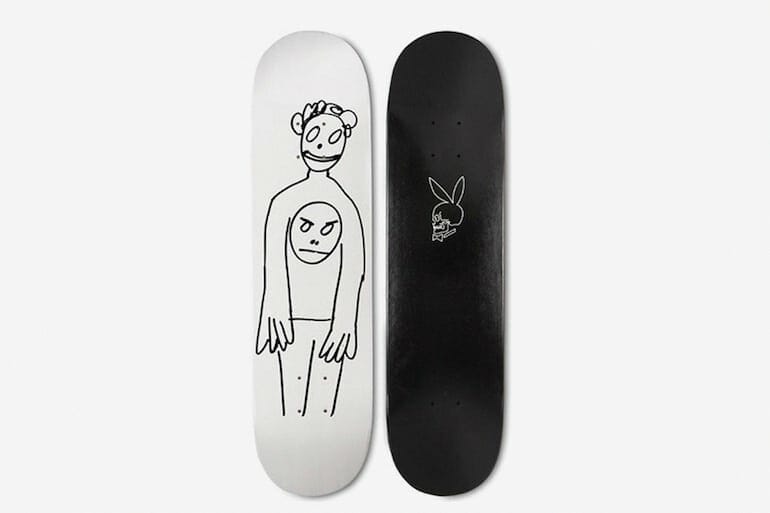 Again teaming up with an artist, Supreme turned its attention to Robert Longo in 2012. The Brooklyn-based sculptor and painter was one of the most significant and quintessential artists of the Eighties and his work focused heavily on mass media, which was really coming to the fore during the period.

One of his most important pieces of work is his ‘Men In Cities’ piece, which saw businessmen dressed in suits writhing in agony. Supreme, never one to hold back from breaching a controversial subject, used one of these images in the collaboration. For the collaboration, the pair teamed up and released three limited edition skate decks, designed by Robert Longo. 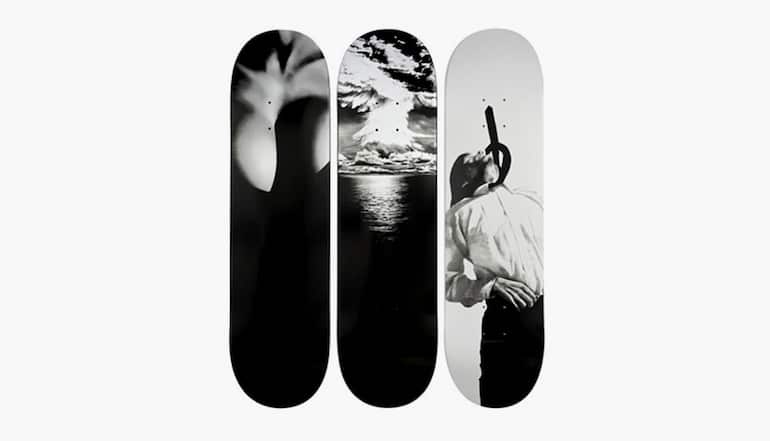 Takashi Murakami is a renowned artist originating from Tokyo and is one of Japan’s most interesting artists. His most famous piece ‘Superflat’ interpreted Japanese culture in a different way and completely eradicated the concept of high and low culture, which is actually synonymous with the country. He is instrumental in questioning the relationship between East and West Japan, past and present, fine art, popular culture and mass media.

One of Murakami’s artists, Mr., worked with him when he opened the Hiropon factory which eventually transformed into Kaikai Kiki’s, which now has bases in New York, Tokyo and Saitama. Kaikai Kiki aims to pioneer and broaden the perimeters of Japanese culture. Mr. is a part of this – his name derived from the national baseball superstar Shigeo Nagashima’s nickname ‘mister’. His work focused on cartoon characters, but with a highly sexual aspect and embodies the fascination with young children in Japan.

For the collaboration, Supreme enlisted both Murakami and Mr. to design decks. The Takashi Murakami x Supreme series consisted of three decks designed by each artist and was available at six locations. 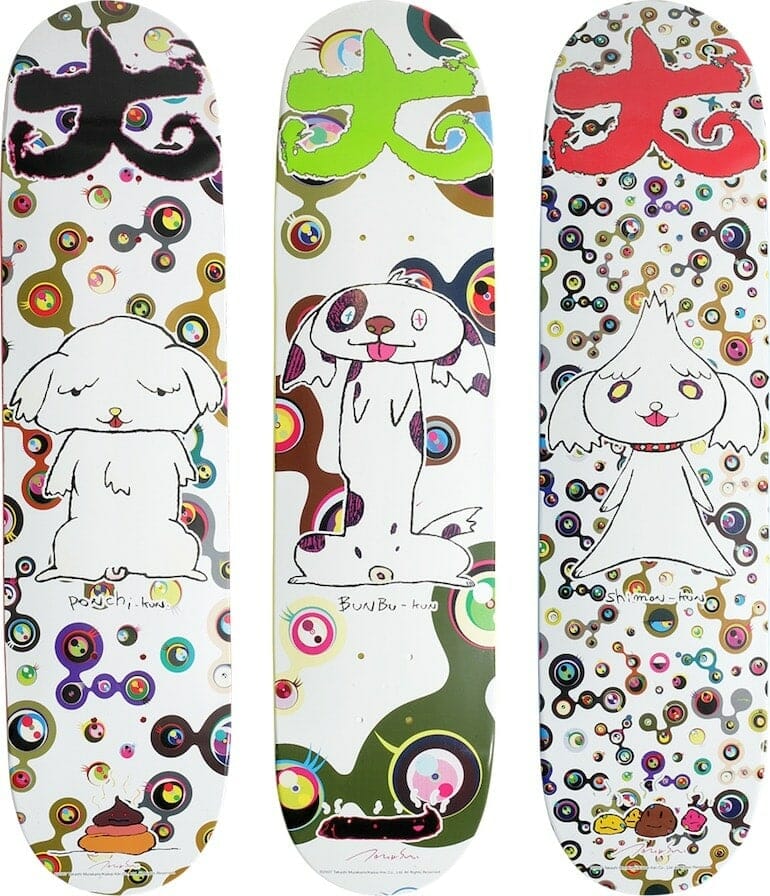 For Autumn/Winter 2014 Supreme teamed up with Raymond Pettibon. Now if you don’t know already, Raymond Pettibon is one of the most iconic punk artists to date. He is the man behind the legendary Black Flag ‘Four Bars’ logo, as well as the creator of content for Sonic Youth and Foo Fighters.

His work is exactly what Supreme loves. Gritty and youthful, it focuses on the rougher edged side of American culture. Themes of violence, rebellion and anti-authoritarianism run prolifically through his work, and is very much reminiscent of the early days of Supreme when James Jebbia would bootleg other brands without a care.

This was probably one of the most appropriate collaborations to date and the two visions of both Supreme and Pettibon merge perfectly. The capsule collection consisted of T-shirts and other apparel as well as skate decks. Two skate decks were created which featured Pettibon’s artwork. Proceeds from this collaboration were given to Silverlake Conservatory of Music in Los Angeles (Pettibon had originally started his career as a musician in California before moving to art). 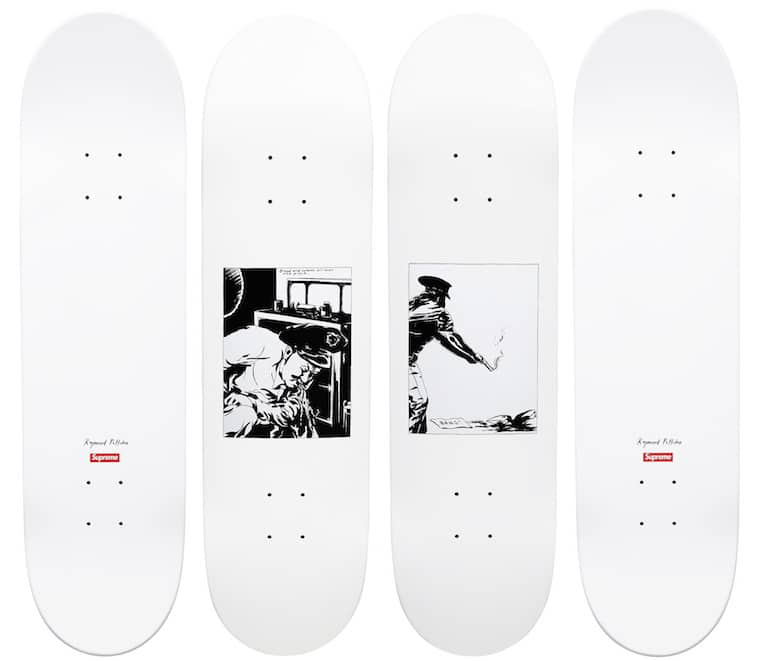 While you may think that the Louis Vuitton x Supreme collaboration was one of the best ever, with the skate deck produced as a result of it catching the eye of people all over the world, you’d be quite wrong to assume that this was one of the only ones that has done so. Supreme has collaborated with some of the world’s best artists and designers over the years and the skate decks that have resulted from collaborations have been instant, sell-out hits that now can resell for thousands of pounds. Above are our top picks from designer collaborations with the likes of Damien Hirst, Raymond Pettibon and Jeff Koons.