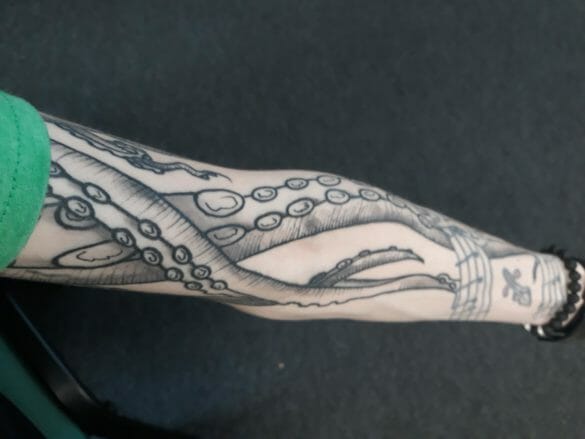 If tentacles are the stuff of your nightmares, influenced by all those horror movies, you’re not alone! But you have to admit octopus tentacles make for a cool tattoo design. Octopi are mysterious and excellent predators of the deep sea. An octopus tattoo meaning is usually: adaptability, regeneration, and physical strength. Looking to find amazing octopus tattoos? Look no further than our inspiring top 15 tentacle and octopus tattoos below!

A classic black ink tattoo with interesting shading never disappoints. Nor will this tentacle tattoo here! The protruding suckers on the octopus tentacle will immediately draw attention to the image. We think this tattoo is best suited for a wrist or ankle placement.

Another intriguing octopus tentacle design we think you may like is this chopped off tentacle. The fake blood splatter creates such a dynamic vibe to the tattoo. Choose green color ink instead of blue to give it an outer space monster vibe!

Nothing instills fear more than an octopus tentacle enveloping the anchor you just placed! We recommend this tentacle tattoo design to any sea lover, afraid of these creators or not. Place it anywhere you wish and we promise it will send chills down everyone’s spines!

This is the most unique tentacle tattoo image we found! Anyone for a tentacle banana? Say I! Octopus tentacles are best described as creepy by most people. But not with this blood-curdling tattoo design! If you love experimenting with your food choices, why not let this art be on your skin?

Next in line of interesting, to say the least, tattoos of octopus tentacles is this one! Anyone in the mood for some celebration with your trusty underwater friend? Nothing like some good beer after a long work day, am I right? Say ‘cheers’ to this unique tentacle holding a beer mug tattoo!

Fans of gory pop culture will surely like these next two tattoo designs. This tentacle decided to grow some eyeballs instead of a traditional sucker. Sure, octopi use tentacles as sensors, but eyeballs? Really? Add some color to this image and it will stand out no matter the tattoo placement!

Hungry for some tentacle and eyeball noodle soup? Yum! This image is straight from a horror survival game or movie. Would you eat this bowl on a dare? If your answer is no, then say yes to tattooing this shocking black ink tattoo on a shoulder or thigh!

There are people out there whose worst nightmare is octopus tentacles bursting out a chessboard. And then there are people who tattoo that image on their back or arm. Consider getting this octopus tattoo art with a vibrant accent color like orange or red!

Skull tattoos will never be out of fashion, especially for men! They are a staple among tattoo designs. So why not combine it with a chilling octopus tentacle like in this image we chose? The use of subtle colors for shading in this octopus tentacle and skull tattoo is remarkable. We find this tattoo will pop on any skin tone for sure!

Trying to find new and unusual octopus tattoo designs? May we suggest an octopus astronaut? If you don’t believe in their existence, then try and explain this image! Inked only in black color, this octopus tattoo needs no color to make people say ‘what the?’. A small design like this one is ideal as a wrist or ankle tattoo!

We found some crazy octopus tattoos while working on this list. Let’s bring it down a notch with this classic black ink octopus tattoo. Octopi kind of look like aliens on their own, so you don’t need to add any flashy colors to the image. The elongated octopus tattoo style fits well on your forearm or lower half of the body.

Back to gory comic book octopus tattoos, we would like to present you this horrifying image. Those eyes pierce your poor terrified soul, don’t they? Give a leg or two to this octopus tattoo! One only wonders what an intelligent octopus can do with all it’s eight arms.

Taking a more artistic approach to a traditional tentacle tattoo, how about this outstanding work of art? The overall shape uses inspiration from fossils, but those three faces just add to the creep factor. This intriguing creature tattoo would fit perfectly as a shoulder or thigh tattoo design.

Can you imagine the epic fight between a great white shark and a giant octopus roaring through the deep seas? Now can you imagine it as a legendary tattoo design across your chest or back! The artist’s shading technique is beyond any descriptive words we could use. If you want to intimidate people with a tattoo, get this one!

Thinking of getting a sleeve tattoo with your favorite scary monster – the octopus? We think you will like our pick for a realistic octopus tattoo. This detailed and colorful octopus tattoo is moments away from coming to life! If such an image doesn’t raise your hairs, you should definitely consider it as your new tattoo!

Octopus tattoo meaning isn’t the same for everyone. While many cultures consider them to be a symbol of strength and fearlessness, you can always add a personal sentiment or saying to the design! If you like any of our top 15 picks for epic octopus tattoo ideas, call a tattoo artist today!