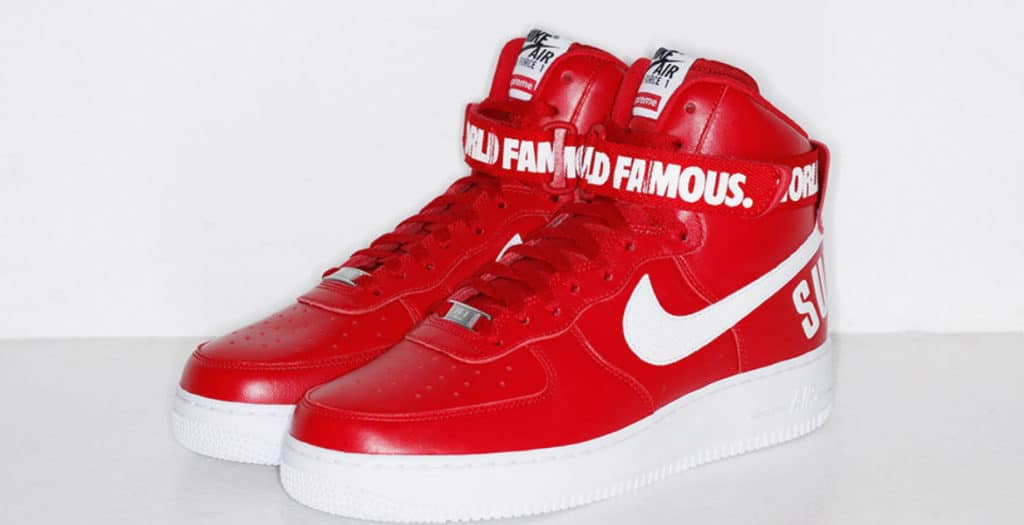 Way back when in the Autumn of 2014 Supreme announced a release date for a long expected collaboration with Nike – a pair of new Air Force 1’s donning “World Famous” branding and it looks like they’re one of the most coveted Supreme collectables in recent years.

To some, Supreme was a once great and authentic skate brand that has now fallen into disrepute due to what are scornfully refer to as “Hypebeasts”. To others, it’s the place to cop the freshest stuff to either flex or to flip at extortionately high prices- a practice known as reselling.

Whichever school of thought you fall into, there is no arguing that Supreme is an extremely successful brand with a cult following. Attracting lines that go round the block at all their physical locations and a sold out online store within thirty seconds, they’re a big player in the industry.

A perfect example of artificially inflating the price of recently released Supreme pieces is that of the aforementioned Supreme x Air Force 1 collaboration. They originally retailed at £115 and sold out in less than 2 minutes. The most sought after pair being the red colourway, you should expect to fork out a minimum of £375 today for them. However, if you’re looking for a pair of brand new red’s in box you should expect to pay around £750 (almost ten times the original retail price)

Often being ranked somewhere in “Supreme’s top ten footwear collaboration” lists, The World Famous Air Force 1 highs have a reputation. Recognised for their loud, in your face Supreme branding scrawled across an ankle strap, they were sold in three colourways. A bright Supreme red with white text, triple Black with white text and triple white with black text.

As mentioned above, if you’re looking to get your hands on a mint condition pair of this particular release, you’ll have to be willing to shell out around £750. They were a huge hit, marking the beginning of a slew of high profile Nike collaborations. Whether you love them or hate them, Supreme are here to stay.