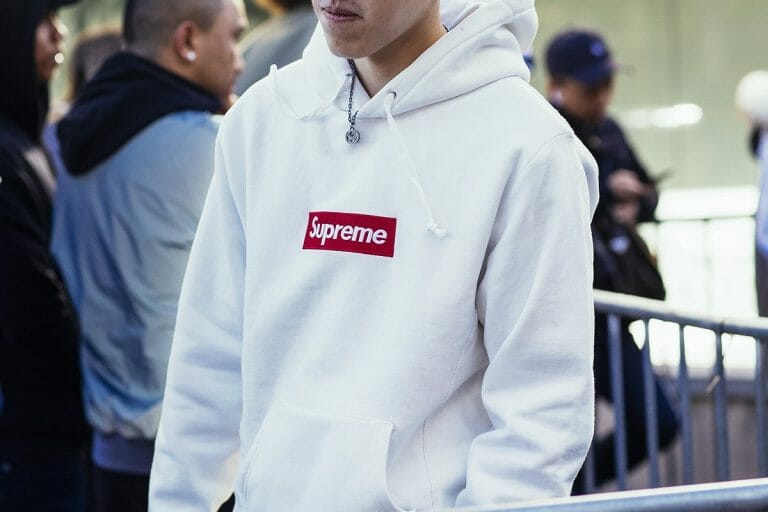 A Supreme box logo T-shirt is one of the most sought after items for a Supreme fan. While the New York-based brand has put out many hyped pieces over the years, including collaborations with the likes of Vans, Nike and Comme Des Garcons, the box logo T-shirt is still and probably always will be the most iconic Supreme item.

The box logo T-shirt is quite literally what it says on the label – it is a plain T-shirt with a central box across the chest that reads the skate brand’s classic Supreme logo. This has been mixed up over the years with different logo patterns and variations of the iconic T-shirt. Here are our pick of the ten best Supreme shirts with the box logo design since 1994.

This was not a proper collaboration and back in 1997 Supreme went against copyright infringement laws and did it anyway. The Supreme Coca Cola box logo T-shirt read ‘Enjoy Supreme’, reinventing the traditional ‘Enjoy Coca-Cola’ logo. In 1997 however, the brand wasn’t as hyped as it is today and was small enough to get away with the blatant copy.

This Supreme box logo T-shit incorporated the traditional and now iconic camouflage design of BAPE. Obviously, both being hyped giants in the streetwear world, this was a collaboration that garnered a huge amount of interest. The skate brand released ten versions of the design in different colourways.

This T-shirt is one of the rarest yet and was basically mainly gifted to friends and family of Rizzoli and Supreme. At the same time Supreme and Rizzoli hooked up and released a book outlining the brand’s history and the T-shirt was an extension of this. On the front was a plain black box logo and on the rear of the T-shirt was a picture of the cover of the book.

As said before Supreme is no stranger to riffing on already existing patterns, looking mostly to Louis Vuitton, Gucci and Burberry. The Burberry pattern is one of the most instantly recognisable and iconic in the world and Supreme jumped on this. They didn’t get permission from Burberry, although when has that ever stopped them.

In commemoration of the victims of the 9/11 attacks, Supreme brought out a special relief box logo t-shirt dedicated to them.

In 2011 Japan was hit by a Tsunami and Supreme used its hype to raise funds for the victims. The T-shirt featured a unique box logo and on the back the T-shirt read ‘Japan Earthquake Relief, March 2011’. 100% of profits went to those affected via the Japanese Red Cross Society.

This design came in 2011 and had the renowned artist hook up with the skate brand. The T-shirt came alongside a series of skate decks and read ‘Life’s a bitch then you DIE’.

In Spring 2017 Comme Des Garçons and Supreme linked up to produce a collection of trainers, hoodies and other garments. This included a riff on the iconic box logo T-shirt which read ‘Comme Des Garcons’ in navy over the traditional red and white Supreme logo.

London finally got some recognition in 2011 when Supreme released a limited edition box logo superimposed over the Union Jack. It was only released at the Peter Street location in London’s Soho.

Louis Vuitton and Supreme teamed up on a  controversial and hotly-debated collection in 2017. Kim Jones officially gave the brand the Louis Vuitton monogram, which Supreme superimposed onto its box logo.

Over the years Supreme has reinvented its iconic box logo T-shirt time and time again. Sometimes without permission, the skate brand has used other brand’s motifs and patterns, facing law suits as a consequence. That said, that hasn’t deterred any hype surrounding the box logo T-shirts’ releases and they are now some of Supreme’s most highly sought after products.