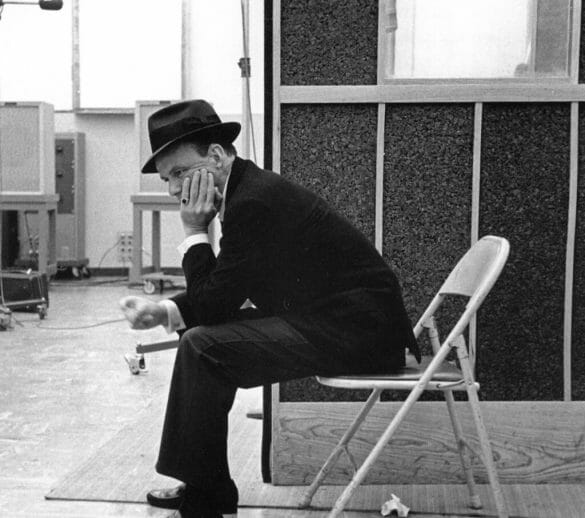 Who can bring a relaxed and cool presence to a suit? Style Icon Frank Sinatra, that’s who. We write an overview of his style.

One of the most iconic people of the mid 20th century with his all-round contribution to music and film, Frank Sinatra was the idol of most fashionable men during that period.

As were the times, the top hat or trilby was a consistent part of mens’ style where as nowadays it is only fashionable to a niche style group. Hard to say if he was actually was the pioneer of the trilby, but he was certainly the last of the Mohicans with the now trendy hat.

His jazz style tended to dictate his outfits, even though the new wave of the denim was being introduced in American pop culture. The suit and fastened tie or bow tie always looked flawless, as you probably wouldn’t find a wrinke in any of his suits.

However, when ol’ blue eyes put his actors hat on, he tipped the hat to the side, loosened the pristine tie and showed his relaxed side. ‘Ol’ Blue Eyes was his nickname if you didn’t know, but it was kind of ironic as most would only own a black and white TV as demand for his performances were at a premium.

Classy all the way till the end, you would go a long way to find him without the best-tailored suits. In fact the only two images we could find him in a different outfit was only on the golf course. Although limited in his selection of attire, it always projected style.